Why is Thanksgiving in November, and who started the holiday? 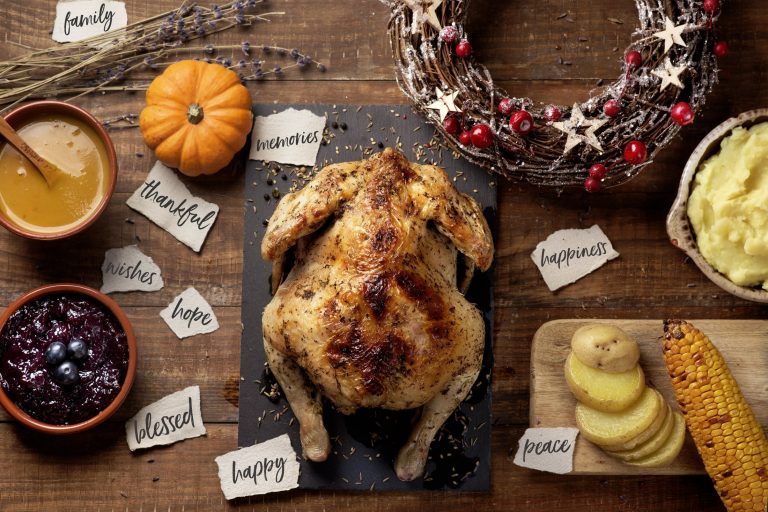 Why is Thanksgiving in November?

Thanksgiving falls on the fourth Thursday of November every year. That gives many lucky American workers a 5-day holiday weekend (except for those in retail who have to work on Black Friday, of course).

We don’t actually know what days the Pilgrims celebrated the first Thanksgiving, which was in fact a 3-day festival. It also was in mid-October, not November.

But on September 28, 1789, the first Federal Congress asked President George Washington to “recommend to the nation a day of thanksgiving.” So a few days later, he issued a proclamation naming Thursday, November 26, 1789 as a “Day of Publick Thanksgivin.”

Presidents that followed George Washington issued Thanksgiving Proclamations as well, but the dates (and months) never stayed consistent from year to year. Finally in 1863, President Abraham Lincoln made a Proclamation that Thanksgiving would be commemorated on the last Thursday of November every year.

Then, in 1939, President Franklin Roosevelt moved Thanksgiving from the last Thursday (which could be either the fourth of fifth Thursday in November depending on the year) to the third Thursday of November in order to create a longer Christmas shopping season. However, several states refused to acknowledge the change. So from 1939-1941, the country was divided, and celebrated Thanksgiving on two different days.

On December 26, 1941, to end the confusion, Congress stepped in and passed a law making Thanksgiving the fourth Thursday of November. Now the country celebrates the holiday in unison, and follows the day with the start of the Christmas shopping season.

MORE: A history of Thanksgiving, important holiday traditions, and a timeline that is easy to follow

Thanksgiving is a beloved American holiday that can be attributed to the Pilgrims and the Wampanoag Indians.

The Pilgrims were a group of men and women who sailed from England to America on the Mayflower to avoid religious suppression (find out more about who the Pilgrims were here).

The “first Thanksgiving,” as we now refer to it, was celebrated by the Pilgrims and Indians at Plymouth Plantation, where what is now Plymouth, Massachusetts.

The original three-day Thanksgiving festival was held in honor of their first successful harvest (growing season) in the new world, and included prayers of thanks for all their blessings. Most every fall after that, the feasts continued as a religious ceremony, and soon became a tradition.

Thanksgiving Day is now observed as a federal holiday on the fourth Thursday in November every year — traditionally with a turkey feast among family and friends. Thanksgiving has been sporadically celebrated nationwide since 1789, but wasn’t declared a federal holiday by Abraham Lincoln until 1863.

So we can thank the Pilgrims and the Wampanoag tribe for starting Thanksgiving and giving us a holiday upon which to give thanks, spend quality time with family and friends, and gorge upon turkey, stuffing, and mashed potatoes.

A Colonial Thanksgiving proclamation from 1721

By the Honourable Gurdon Saltonstall, Esq; GOVERNOUR of His Majesty’s colony of Connecticut in New-England.

A PROCLAMATION For a Publick Thanksgiving.

ALTHOUGH, Considering the Judgments of GOD, which are on the Earth, in the great Distress & Desolation brought upon many Nations, both by WAR and PESTILENCE.

AND Considering also particularly, the awful Tokens of GOD’s Righteous Anger against us, Especially, in the Contagious SICKNESS which has been in divers Places of the Land, and in the continued RAINS, by which great Losses have been sustained, It becomes Us to be deeply Humbled before the LORD.

IT is Nevertheless our Duty to Acknowledge the many Instances of Divine Goodness, which the LORD whose Ways, are not as Ours, has Graciously vouchtaled Us and which are never to be forgotten. Namely,

THE Smiles of Providence on the BRITISH Empire, and particularly, On Our Sovereign Lord the KING, in the Prosperity of His Life and Reign: On Their Royal Highnesles the PRINCE and PRINCESS of Wales, and and on all the Branches of the ROYAL FAMILY, not only, in Their Happy Increase, by the BIRTH of the Royal Prince WILLIAM AUGUSTUS, but, also, in the Lives of Others of Them when in Hazard by Sickness, have been Mercifully Spared.

THE PEACE which has been Continued, and Confirmed to Our Nation, after so many Endeavours to interrupt It.

THE Preservation of the British Dominions from the Raging PESTILENCE, which has laid so many Places waste, within their View, and Neighbourhood.

THE General HEALTH that has been Enjoyed in the Land, notwithstanding, The SMALLPOX has prevailed so much, in the Principal Place of our Neighbouring Province.

THE Preservation of Our COLONY, in so great a Measure from that Contagious Sickness, when We have been in great Danger of It; The Continuance of Our Privileges both Civil and Sacred; The Peace which we have Enjoyed: And the good Supply of the Fruits of the Earth, which the present Year has been Crowned with.

WHICH are, (All of them) Blessings from the LORD, whose Mercy therein We ought to Celebrate with great THANKFULNESS.

I have therefore thought fit, with the Advice and Consent of the Council, and at the Desire of the Representatives, to Appoint, and do hereby Appoint Wednesday, the Eight Day of November next, to be Observed as a Day of publick THANKGIVING throughout the Colony. Exhorting all both Ministers & People, with Unseigned Devotion, to Bless the Name of the LORD, and praise him for all the Wonders of his Goodness; And, to Beg that the mercy which we Adore, may in all the needful Instances thereof be manifested to Us.

And all Service Labours on the said Day is hereby strictly prohibited.

Given in New-Haven, the Fourteenth Day of October, Anno Domini 1721, In the Eight year of the Reign of Our Sovereign lord GEORGE, by the Grace of GOD of Great Britain, France and Ireland, KING, Defender of the Faith, &c.

G. SALTONSTALL.
GOD Save the KING.

NEW-LONDON: Printed by Timothy Green, Printer to his Honour the GOVERNOUR and COMPANY, 1721.

MORE: What did they eat on the first Thanksgiving?