The history of Thanksgiving Day football 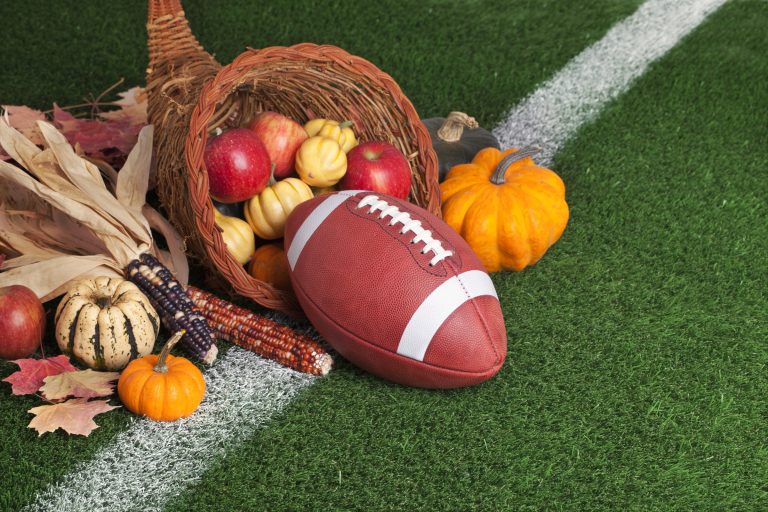 To modern Americans, Thanksgiving and NFL games go together like turkey and gravy, but the traditions have evolved over time. Here are some entertaining Thanksgiving Day football facts that you can bust out at your next holiday gathering.

The NFL was founded in 1920 and consisted of teams such as the Akron Pros, the Muncie Flyers and the Rock Island Independents. If these aren’t familiar to you, it’s because they’re no longer around. In fact, only two of the original 11 NFL franchises remain today: the Decatur Staleys (now known as the Chicago Bears) and the Chicago Cardinals (now known as the Arizona Cardinals). Early Thanksgiving Day games, then, were made up of teams that don’t grace our TV sets today.

The Lions play every year…

Every year since 1934 (except for 1939 through 1944), the Detroit Lions have suited up on Thanksgiving Day. While the Lions began playing as the Portsmouth (Ohio) Spartans in 1930, George Richards, a local radio executive, purchased the team and moved them to Motor City. It was Richards’ idea to schedule a Thanksgiving Day match, and the sellout crowd (26,000!) and the game’s rousing success bolstered the idea for years to come. Since then, the Lions have been one of the traditional two NFL franchises to play on T-Day.

…and so do the Cowboys

The Cowboys are another NFL franchise that plays every Thanksgiving Day, although their stint didn’t start until 1966. They’ve missed a couple years since (1975 and 1977), but you can count on seeing your ‘Boys every Turkey Day.

One team has never competed in a Thanksgiving Day game

The Jacksonville Jaguars, who joined the NFL in 1995, have yet to play in a Turkey Day game.

What’s the longest drought since an appearance in a Thanksgiving Day game?

The Los Angeles Rams haven’t suited up for a Thanksgiving Day game since 1975.

The Turkey Leg Award is a thing

John Madden awarded the first Turkey Leg Award in 1989 to the game’s most valuable player (that year, it was the Eagles’ Reggie White). It’s just like it sounds: An actual (cooked) turkey leg. To the delight of audiences everywhere, the player happily chomps on it during post-game interviews. Interestingly, sometimes there’s more than one MVP, so the production team attaches extra legs to the body of the turkey for that purpose (or provides more than one turkey).

So, as you sit down to your Thanksgiving dinner each year, your thoughts may turn toward those afternoon and evening football games as you make your way through your turkey, stuffing and dessert. Thankfully, the football gods have anointed three games every Thanksgiving, so you’ll have plenty to watch as you digest your huge, delicious meal.