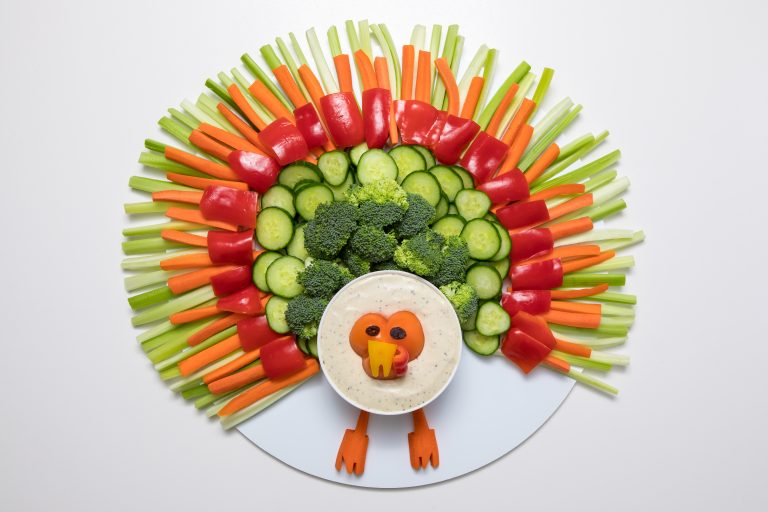 Looking for a way to keep hungry kids happy while you prepare Thanksgiving dinner? Feed them! Set this Thanksgiving turkey veggie tray, inspired by Skip To My Lou, on the table and let them gobble it up.

Getting your kids—even the picky eaters—to scarf down vegetables is easy when the veggies are masquerading as a turkey. Though your kiddos may wrinkle their noses at a mundane plate of carrots and celery, they will go wild when they see a colorful array of vegetables dressed up as a bird. The cup of ranch dressing will make their delicious and nutritious holiday appetizer even more irresistible. You may even find the hungry adults sneaking off with some of the turkey veggies too.

Made with an assortment of bell peppers, celery and carrot sticks, English cucumber slices, fresh broccoli florets, and raisins, this healthy edible caricature of a turkey is also a fun food activity for the kids. Prep the veggies, give them directions and let them play with their food while you’re making the rest of the Thanksgiving meal.

This Thanksgiving appetizer is a time-saver. A big bonus to this holiday veggie tray is that there’s no cooking required. Every element in this dish is straight off the cutting board. Best yet, you can pre-cut the vegetables up to three days in advance and keep them refrigerated until Thanksgiving. You can also assemble the whole veggie tray, cover with plastic wrap, and refrigerate up to three days.

Note: If you’re going to refrigerate the finished turkey, don’t put the turkey head in the ranch dressing until you’re ready to serve because it will sink into the dip. You don’t want to end up with a headless turkey!

Place a bowl of ranch dressing on the serving platter

You’ll need a large round serving platter and a small bowl for this recipe. Fill the bowl with 1 cup ranch dressing. Set the bowl at the bottom end of the platter. This bowl will eventually serve as the neck and head of the turkey. 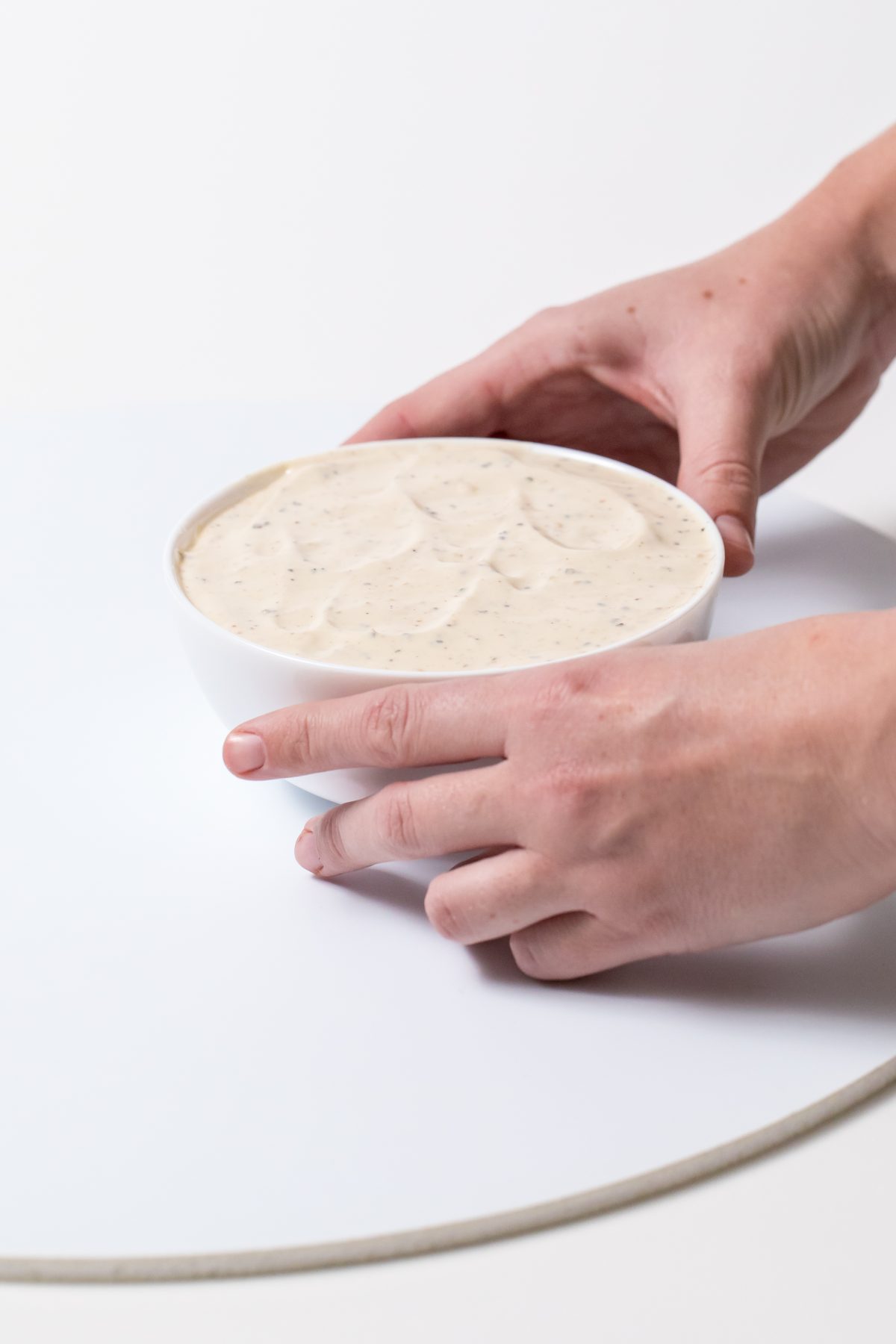 Arrange the vegetables to form the tail feathers of the turkey 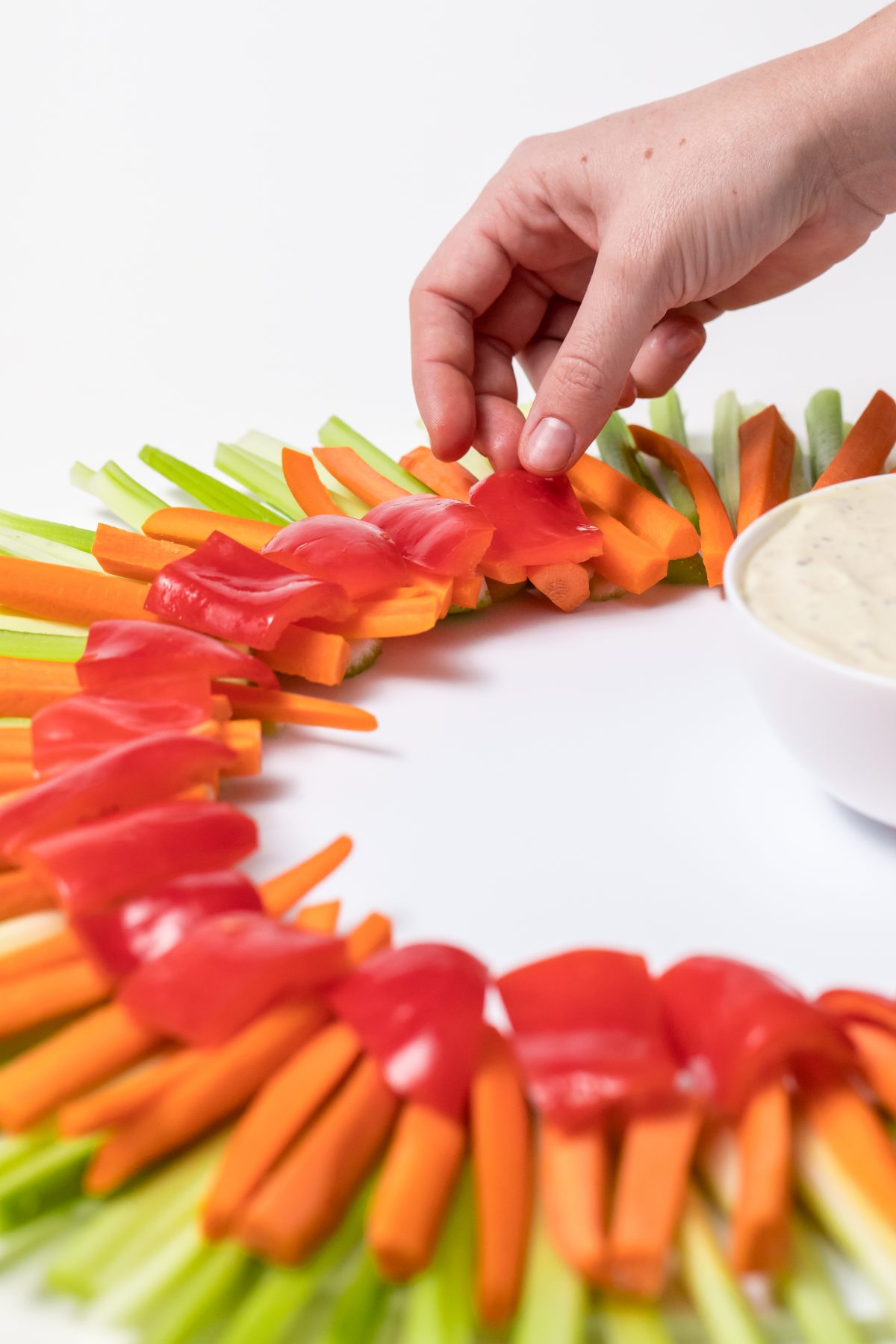 Add cucumbers and broccoli to make the body of the turkey 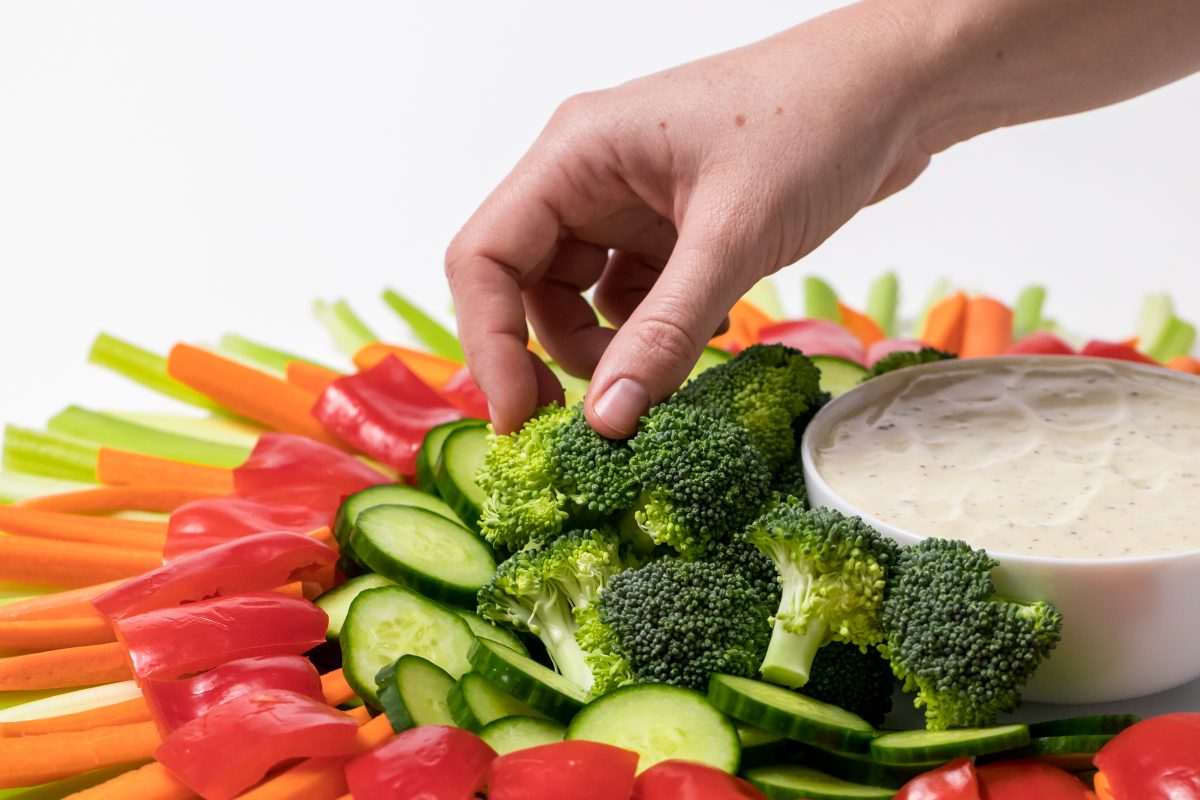 Make the head of the turkey 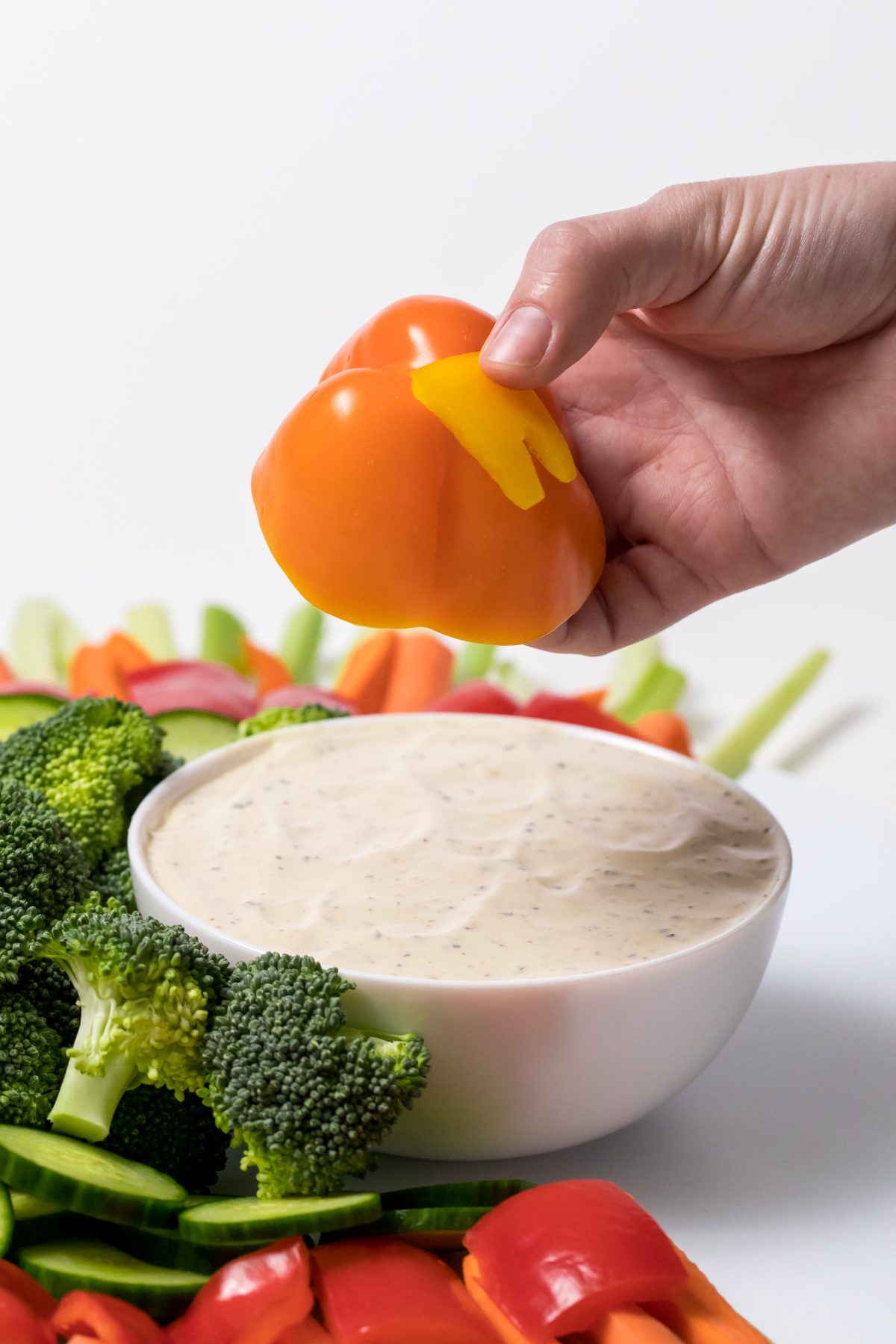 Place the orange bell pepper bottom-side-down in the bowl of ranch to finish the head of the turkey. 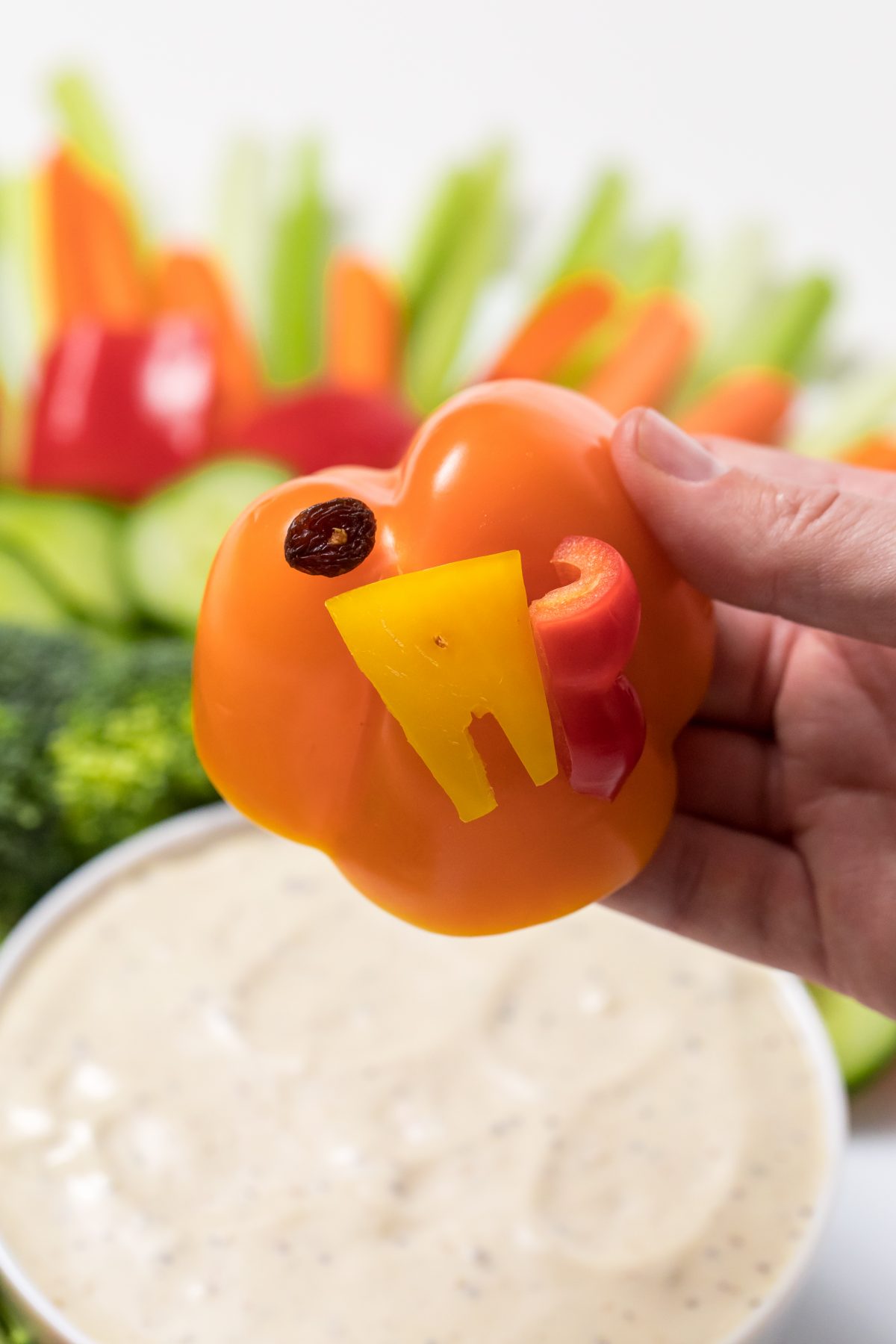 Slice the remaining small carrot in half lengthwise. Use a paring knife to carve the two pieces into the shape of turkey feet. Arrange the carrot feet at the bottom of the bowl. Serve now or refrigerate until ready to serve. 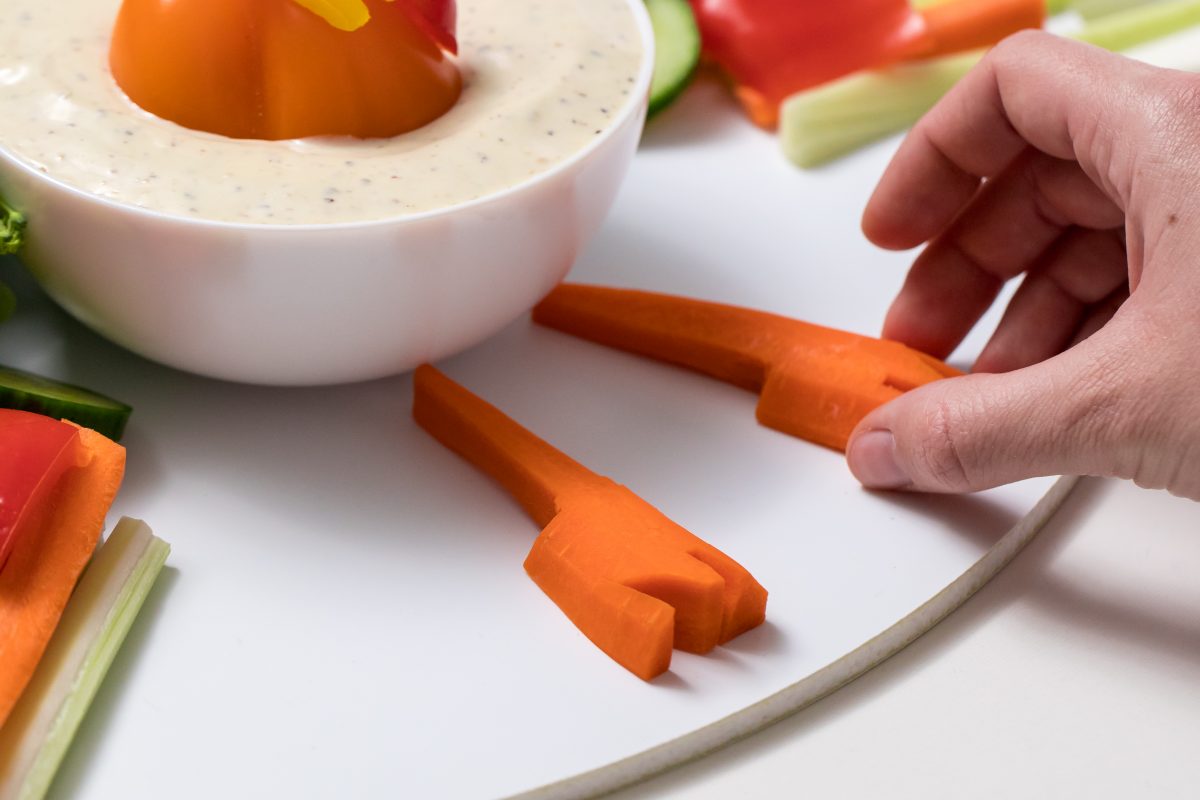 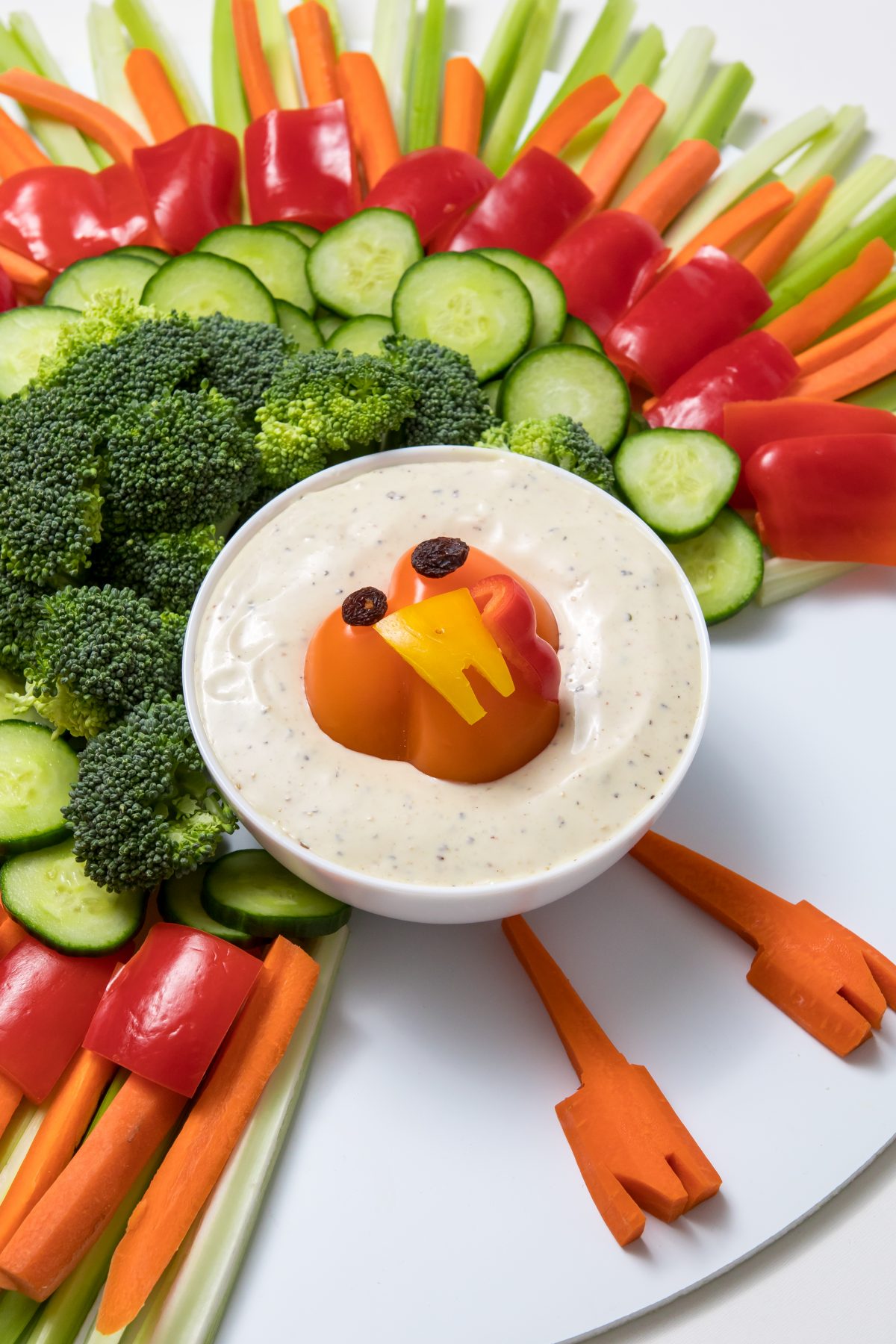 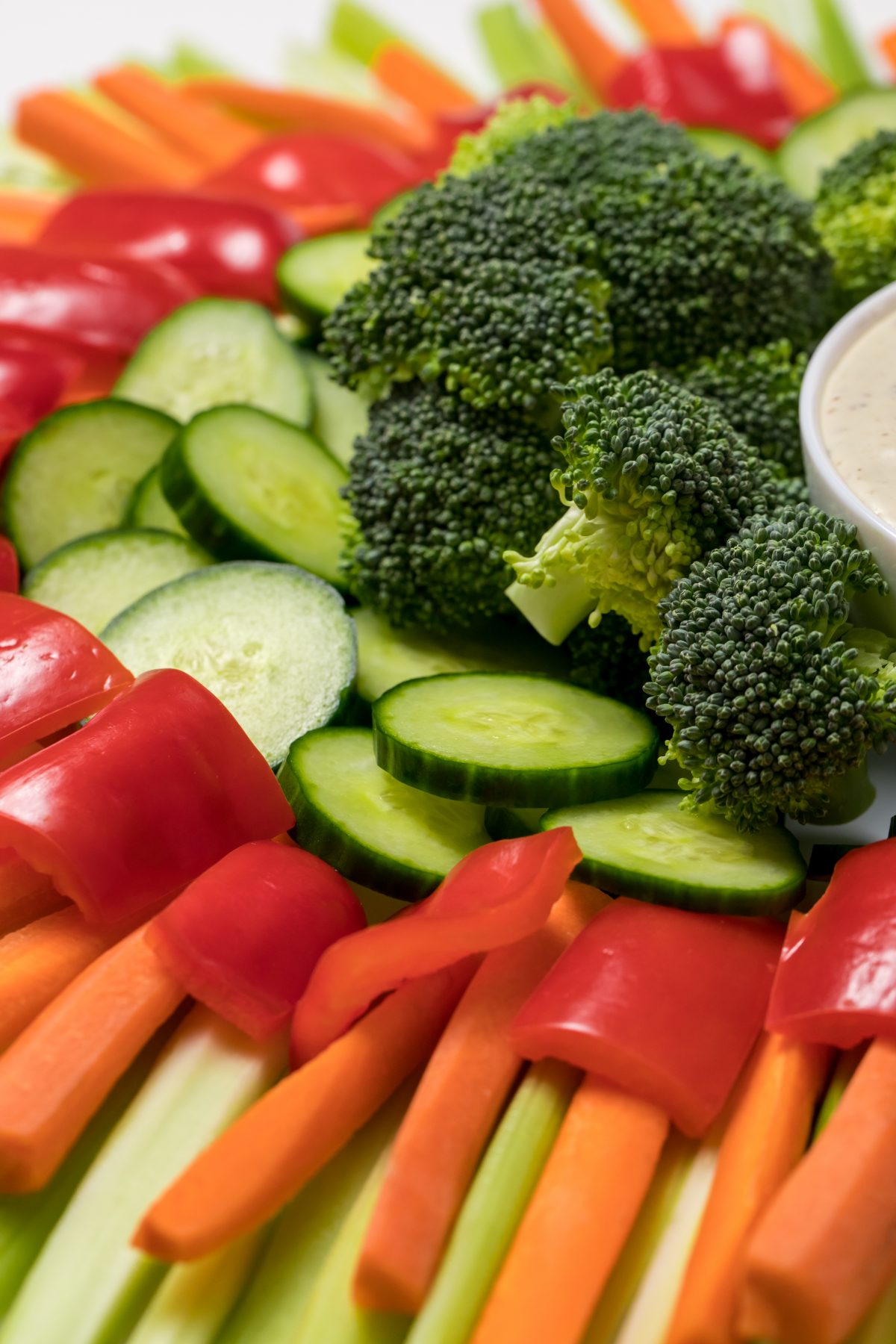 Fun and festive for your holiday party 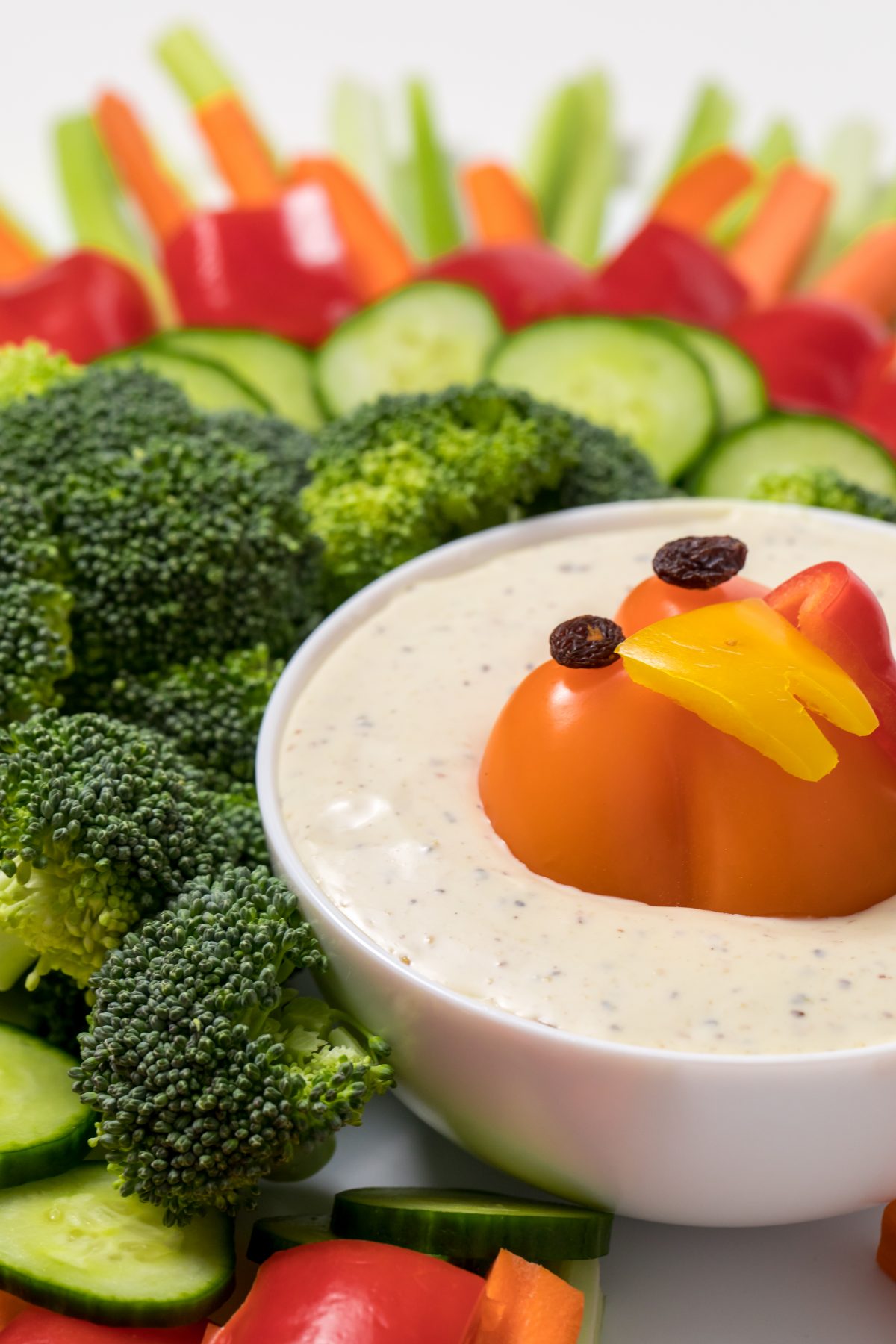 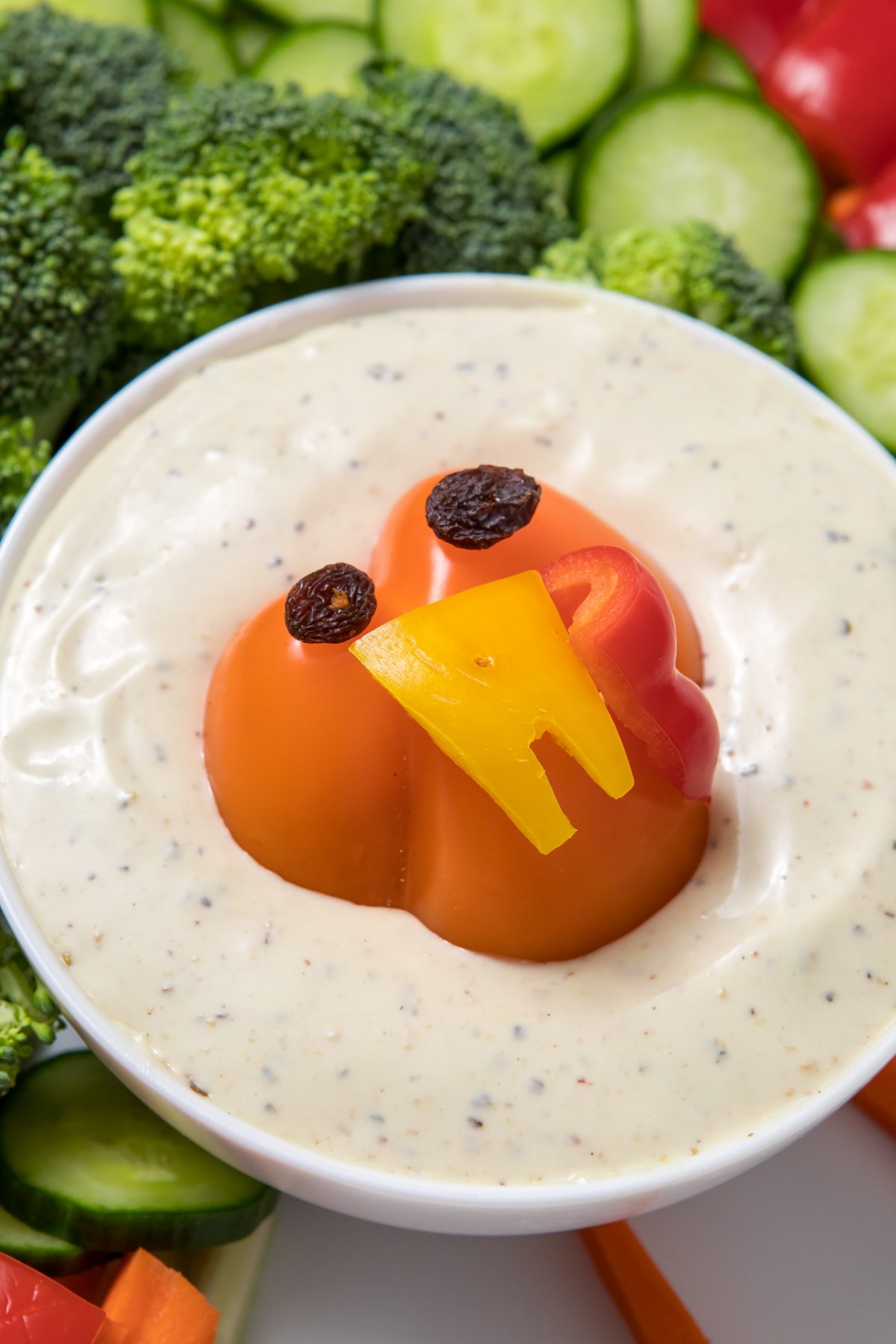 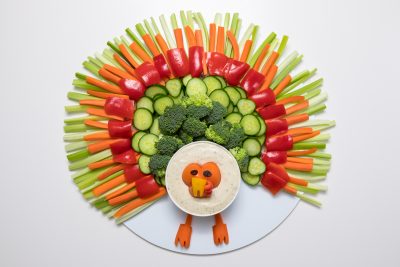 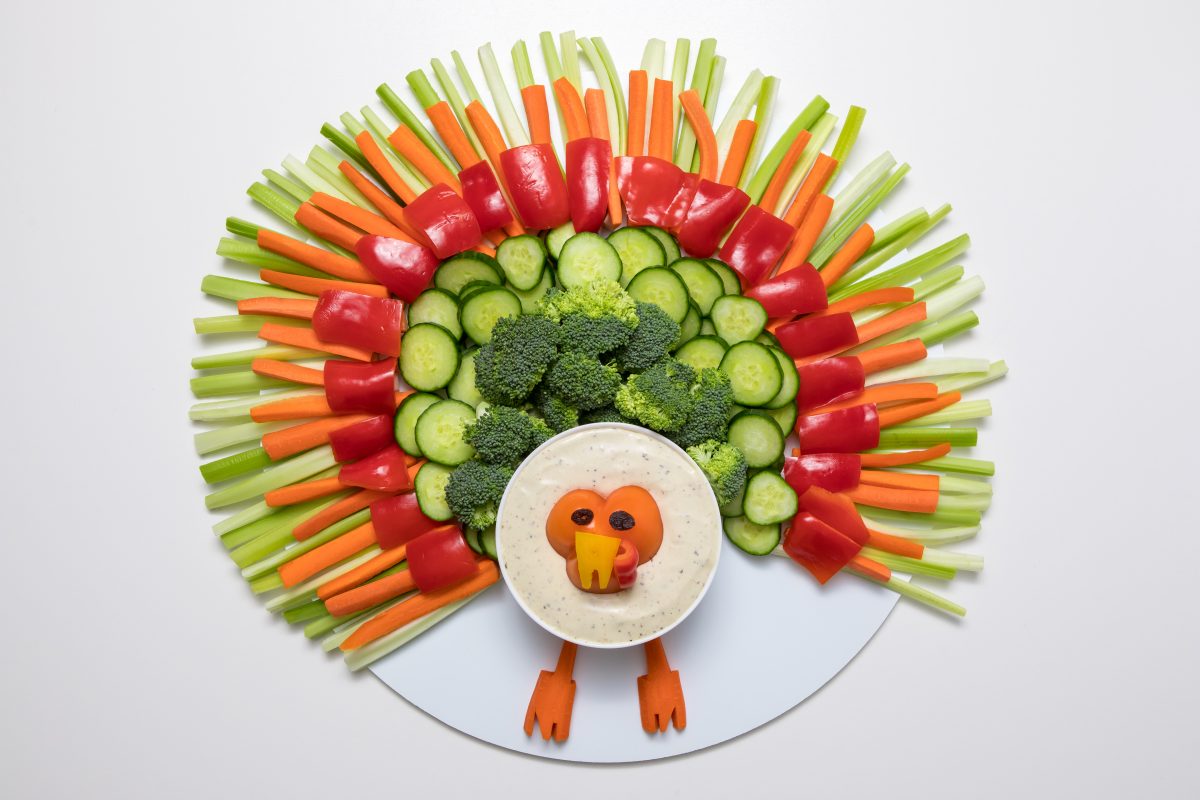