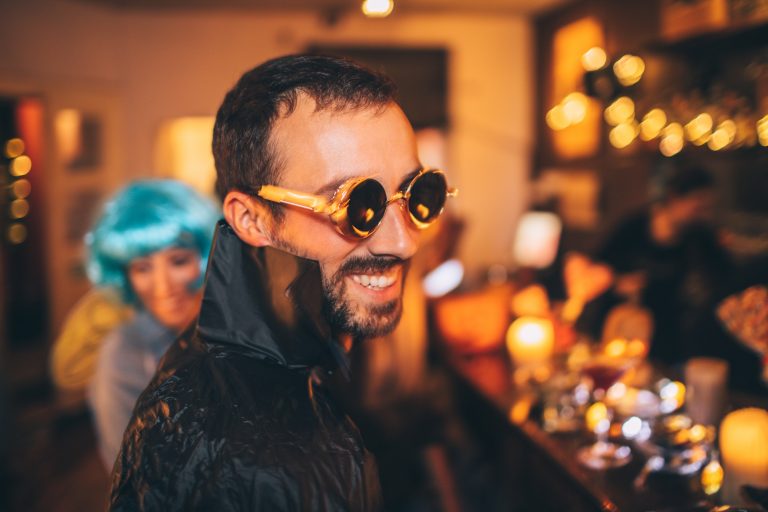 It’s that time of year again: the holiday when you put off getting a costume until the very last minute and then suffer from costume regret all night long at the Halloween party, which is inevitably filled with clever people who thought ahead. But not this year, men, not this year, and certainly not with this list of men’s Halloween costumes we have found for you.

This year, not only are you going to be totally prepared on All Hallow’s Eve, you’re going to make people laugh, win contests, scare children, impress attractive people, and whatever other goals you might have.  We’ve rounded up some of the best men’s Halloween costumes of 2018 (you don’t want to look like last year) along with easy links to get them online. Here we go!

It’s been less than a year since the comic book blockbuster Black Panther came out in theaters. That means that this is the first Halloween where you can get a licensed, high-quality Black Panther costumes that look totally rad. Bonus: These can be reused for cosplay purposes and comic-cons if you’re into that.

Also new this year is this classic horror movie character, Chucky, in adult sizes. We love that the idea is funny but also scary and different; it has a fun movie reference that most everyone will get. If you don’t want to wear a mask, a little face paint and a red wig will do. Dig a pair of red tennis shoes out of your closet and you are totally set to go.

Inflatable costumes have been all the rage since the T. rex costume dropped a couple years ago. Now there are tons of great, funny options (even though they’re a bit spendy). Our favorite this year is the air dancer (you know, those things they have in front of car dealerships?). Not only is it hilarious, but if you’re going to a Halloween party, you will absolutely rule the dance floor — we promise.

Have you fallen into the international obsession with Fortnite yet, maybe along with your kids? Give a hat tip to the game that is sweeping the nation with this Dark Voyager costume. This officially licensed version comes with tons of small details, including gloves, knee pads, boot covers, and a harness. A great choice if you’re in a cold climate and will be out running the streets with your littles.

New to the stores this year is an ingenious headless horseman costume that makes it look like you lost yours. Again, this choice has the one-two punch of being a little bit funny and a little bit scary, just be careful when you’re walking through doorways, as several of the reviewers warn.

There’s a whole series of animal onesies available for men and women this year, and some of the new options are great for Halloween. We love the kangaroo, which comes with a baby in your pouch and adds another level of interest to the look, although some of the other choices, like dinosaur and shark, are also great. These costumes are warm (without being hot), comfortable, easy to move in, and don’t have a lot of moving parts — they’re also more affordable than a lot of the other all-in-one looks.