Got gravy problems? Get some quick fixes here! 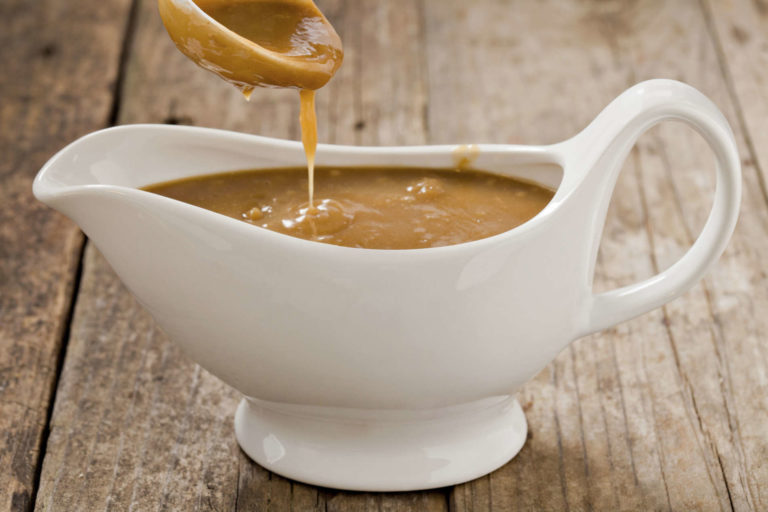 To make great gravy, here are a few things to remember — and if if you run into problems, here’s some help.

For the richest, smoothest and tastiest recipe, you need to first find a reliable recipe, read it through, and then follow it to the letter, says Drusilla Banks, the Extension Educator of Nutrition and Wellness at the University of Illinois Extension.

Pan gravy is a type of gravy that’s made directly in the roasting pan. Here’s the best basic pan gravy recipe. It’s really easy, and you’ve got one less pot to wash!

Giblet gravy is generally thickened with flour by making a roux (flour browned in oil). There are three classic roux — white, blond, and brown. The color of the finished roux will determine the color of the gravy. To make a roux, cook the flour in oil, butter or pan drippings. Heat the roux long enough for the color to deepen a little darker than the desired color of the gravy. Darker roux produces a deeper, richer flavor.

To avoid lumps, Banks says that the roux must be stirred constantly during browning. (Don’t rush the browning of the roux; it may take 15 to 20 minutes to come to the color you want to achieve.) If the ratio of flour to oil is too great, lumps may develop. If this happens, add a little more oil and stir, stir, stir.

Gravy also continues to thicken as it cools, so make it a little on the thin side (by adding a bit more broth or water) and it should cool to correct consistency.

Practice during the weeks before Thanksgiving so your holiday giblet gravy will be perfect!

MORE: This citrus-infused lemon and rosemary turkey gravy will be the star of your holiday table

If you run into problems, here’s some help.

Gravy help: With a whisk or rotary beater, beat the gravy until smooth. A strainer also works to filter out lumps. If all other attempts fail, use a food processor or blender. Reheat, stirring constantly; serve.

Problem: Gravy is too salty.

Gravy help: If the oversalting is slight:

If the oversalting is severe, the gravy must be repaired by increasing the quantity. Prepare another batch of gravy, omitting all salt. Blend the two batches together.

Problem: Gravy is too light in color.

Problem: Gravy is not thick enough.

Gravy help: If time permits, allow the gravy to continue to simmer on the range top (without a lid). If there is not enough time, mix in one of the following thickening agents as indicated:

Note: Mixing starch with cold water before adding it to a hot mixture prevents lumping.

Problem: Gravy is too thick.

Gravy help: Slowly whisk in more broth until the desired thickness is reached.

Gravy help: For an immediate fix, the fat can be skimmed off the top or soaked up with a fresh bread slice. If more time allows, chill the gravy, skim off the fat and reheat the gravy until it bubbles.

Sources include National Turkey Federation and University of Illinois Extension