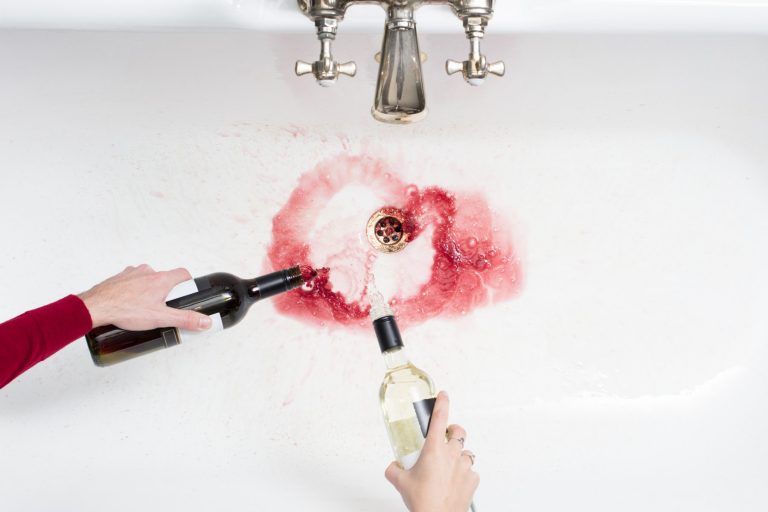 A little over 16 years ago, after struggling with alcoholism and drug addiction for several years, I decided to get sober. The choice wasn’t easy and it certainly wasn’t something I was instantaneously proud of. In fact, I was downright ashamed. In the late ‘90s and early 2000s, there was nothing cool about abstaining from alcohol (being sober curious was most definitely not a thing). Those were the years when Absolut ads were plastered on the walls of nearly every teenager in America. Drinking was glorified and getting drunk was something to celebrate.

I was thrust into the world of recovery, where I learned that the first word in AA stood for “alcohol” and the second, “anonymous” — and people took anonymity very seriously for a variety of reasons, one of them being that alcoholics had a very negative stigma attached to them. Being an alcoholic was sort of like having a scarlet letter plastered across your chest. Simply holding the title could lose you friends, negatively impact your career and make you look like damaged goods.

Fortunately, over the years, how we look at drinking has started to evolve, partially thanks to the explosion of the wellness world. All of a sudden not drinking — whether because of an addiction or simply for health reasons — has become sort of cool, sexy even.

Mocktails are everywhere, sober bars are popping up and sober social networks (that aren’t AA) are forming. Alcohol companies are offering zero-alcohol beer and trendy mocktail mixers. Was there even such a thing as “Dry January” 10 years ago? Sober influencers are all over social media, spreading their booze-free messages and mantras along with Instagram-y images. Currently, there are nearly 500,000 posts on Instagram with the hashtag #soberissexy. So much for that A for anonymous in AA.

The sober curious movement is officially here, and it doesn’t appear to be going anywhere.

According to family and addictions therapist Dr. Paul Hokemeyer, Ph.D., we have the millennials to thank for the sober curious movement. “It’s a generational trend,” he explains. In the last few decades, while they have been coming of age on avocado toast and kale, they have also been able to witness just how drugs, alcohol and mental health issues can damage families, communities, the country and the world. And they are wondering, what is the point?

“I think people are starting to question the status quo,” adds Emily Lynn Paulson, author of the sobriety memoir Highlight Real: Finding Honesty & Recovery Beyond the Filtered Light. “When you really think about it, it’s insanity that we wake up hungover, with the knowledge that alcohol makes us feel like crap, yet we immediately return to it because we are so conditioned to feel that it is something we must do as adults.”

She points to messages sold to consumers, such as “rosé all day” and “it’s 5 o’clock somewhere” that lead people to believe that drinking will make them happier, richer or sexier. For years these messages “helped justify our behavior and shield our eyes to the fact that alcohol is killing people left and right,” she points out. Now, people are finally realizing it isn’t all so innocent.

People are using social media to speak out

Addiction-based reality television programs, the rise of social media platforms — specifically Instagram — and the increasing access that people have to create their own podcasts, has definitely been influential in creating the sober curious movement.

Jennifer Gimenez, who starred in two of the first television shows to raise awareness about the disease of alcoholism — Celebrity Rehab with Dr. Drew and Sober House — was undeniably one of the movement’s pioneers. At a time when other celebrities were afraid to reveal their sober status, the actress and model opted to wear hers like a badge. However, she points to the darker side of addiction that is also driving the trend — all the recent high-profile celebrity deaths due to addiction, mental health struggles and suicide.

Gimenez and her fiancé Tim Ryan, author of the autobiography From Dope to Hope: A Man in Recovery, and the subject of an A&E series Dope Man have made it their mission to educate people about the perils of addiction — and not just on social media. The two spend their time traveling around the country, speaking to whoever will listen about their addiction journeys and how awesome life can be when you aren’t a slave to addiction.

“The disease has affected all of us,” Gimenez explains. “People are using their platforms to talk about their recovery. I believe it’s important for all of us to feel humanized.”

So proud to be working side by side with @timryandopetohope Providing solutions for the pandemic called addiction and mental health. ⠀⠀⠀⠀⠀⠀⠀⠀⠀ #TimJenn #WeAreAForce #PowerCouple #Recover #awareness #mentalhealth #SoberIsSexy

Other sober influencers include Austin Cooper, aka Sober Revolution, Abigail Lalumandier, who runs the fashion blog The Sober Style, and food blogger Joy Manning, whose mocktail-dominated account Better Without Booze demonstrates a delectable approach to sobriety. Then there are all the people proudly showing off their AA coins, documenting periods of sobriety and sharing their own inspiration stories.

But is it working?

Ryan seems to have mixed feelings about sobriety’s latest burst in popularity. While he is happy that the word is out about addiction, he points out that he hasn’t seen much progress where it really matters — which is helping people get into long-term treatment programs. He also fears that many of these so-called sobriety “influencers” using catchy hashtags and dramatic before-and-after photos “have no true understanding about the disease of alcohol and mental health.” He calls them “recovery all-stars,” maintaining that the true pioneers of the sober curious movement were his fiancée, Dr. Drew and musician-turned-recovery-advocate Bob Forrest, all of whom have been doing the deal for years.

This is why Ryan spends his life devoted to drug policy reform and educating people about real solutions in recovery, which is how he believes the real changes are going to be made. Gimenez agrees. “This conversation is not going anywhere, nor should it,” she maintains. Catchy slogans and filtered Instagram photos might be attention-grabbing, but the problem needs to be examined much more closely.

However, while the movement might not be directly influencing treatment, perhaps it is guiding people toward a healthier solution to their problems, helping them achieve the same sense of belonging that alcohol falsely promises.

“The more sense of community you can create around positive choices, the more appealing and helpful it is going to be,” Paulson points out. This is one of the reasons so many people get stuck in the “drunk rut” in the first place, wanting a sense of community after work or during happy hour. “Camaraderie in a sober environment creates a sense of belonging and strength in numbers, whether that is at a sober ‘bar’ or an Instagram page.”

Dr. Hokemeyer believes another positive side effect of the “sober hip” movement is its impact on how people who drink alcohol destructively are viewed and supported by people who care for them, ultimately changing the stigma behind it.

“Stigma is the number one reason people do not reach out for help. We got to address stigma in a big way, if we want to reach those who struggle,” Tim Harrington, one half of the husband-and-wife team behind Wide Wonder, explains.

Earlier this year, Harrington and his wife, recovery advocate and author Robyn Cruze, sold their home, converted a school bus into a tiny home and decided to travel around the country with their two children in hopes of doing their part to end the stigma surrounding mental health and addiction. By hosting community events and making appearances on local television shows, they are spreading the message that alcohol isn’t the problem — it is a solution — and it’s “beyond time that we address the very real reasons that people use drugs as a solution and start a non-fear-based dialogue about alternative strategies and solutions to the current challenges of modern society like stress, anxiety, poverty, etc.”

This is our family. Tim, Robyn (me), Lilly, Chloe and our dog, Pricilla. You can Pre in the bus window if you really look.) . We sold our home in Denver, CO and converted a Thomas school bus into a tiny house. All of us are living in 250 square foot and traveling the United States. . Why do you ask? Because Tim and I are really angry at the way, those struggling with mental health and addiction are currently viewed and treated. We’re fed up with how society only hear about mental health and addiction when there’s been a mass shooting or opioid crisis. . We don’t hear about the 25 million people in the USA currently in long term recovery from addiction or the millions of people currently in remission from mental health living fulfilling abundant lives. We don’t hear about mental health a lot because there’s so much stigma surrounding it and what it means. And stigma kills. So does shame. So we’ve gotta talk about it. . We hope that we can help talk about mental health and addiction in a new way. Start a new narrative, you know?  A narrative that ultimately has us viewing and treating those of us with mental health and addiction with the same respect, compassion, and access to care as those suffering from a physical injury. . We’ve just started our road trip and are getting used to it all. We haven’t been great with keeping you updated. But we’re on it now. Head over to our YouTube channel, subscribe and like. . We’re on a mission, and heading to a city near you. We’re starting a new movement of wide wonder. We hope you join us. Get on the bus with us. . Much love . The Harrington’s. (Well technically, we’re the Cruze-Harrington’s. But let’s not mention that to Tim.) 😂🚌 . . #mentalhealth #depression #health #anxiety #ptsd #mentalillness #work #mentalhealthawareness #hope #time #recovery #wellness #today #care #parenting #mentalhealthmatters #thanks #life #stress #read #adhd #story #addiction #addictionawareness #widewonder #stigma #breakthestigma #endthestigma #family #roadtrip

Harrington points out that there are many strategies that can serve as a solution for the problems many use alcohol to solve, but with fewer negative side-effects. “I think people are getting over the short-term fix mentality, as it’s proven itself so ineffective,” he says.

Cheers to the future

According to the World Health Organization, the number of drinkers in the world has been steadily decreasing — down at least 5 percent since 2000 — with young people mostly to thank for the decline.

I think about myself 20-some years ago, when I first turned to the bottle. While I know I was born with the “ism” and am an alcoholic to the core, I wonder if things would have played out the same way for me had I been living in a time when drinking wasn’t so glamorized, if I had been coming of age in today’s society when sober is considered sexy, communities exist where people celebrate abstaining from alcohol instead of mourning it, and alternatives are offered to help fill that gaping hole inside of us and calm the voices in our heads.

And yes, I do believe I could have found a different solution had I been coming of age in 2019. Hopefully, this latest movement will have a positive impact on future generations, not only providing an alternative to drinking, but also removing the stigma of alcoholism in general.

Looking for a fun alternative to alcoholic drinks? Check out our kombucha tutorial below.