The definitive history of the presidential turkey pardon 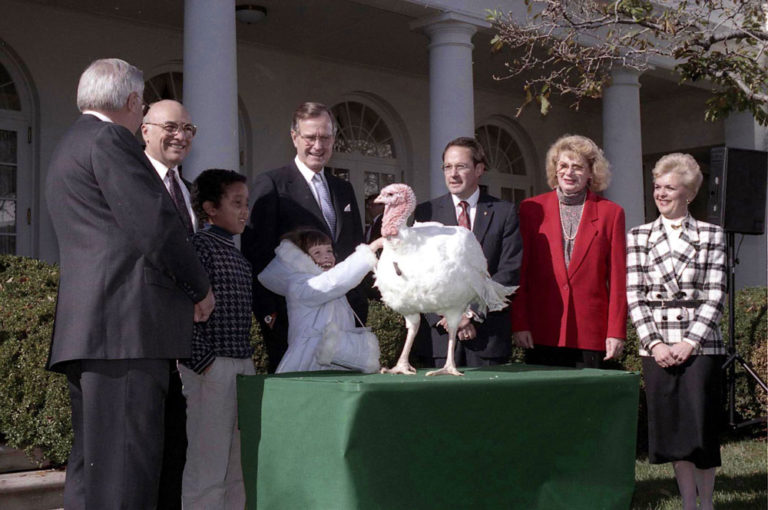 by Megan Slack, Former Deputy Director of Digital Content for the Office of Digital Strategy

Each Thanksgiving, the President “pardons” a hand-selected turkey, sparing the bird from someone’s dinner table and ensuring the rest of its days are spent roaming on a farm, doing whatever it is turkeys love to do.

You’re probably wondering: Where did this very serious business of the Presidential turkey pardon come from anyway?

Americans have been sending the President turkeys for the holidays since at least the 19th century. Beginning in 1873 during Grant’s presidency, a Rhode Island man named Horace Vose was responsible for “selecting with the utmost care” the “noblest gobbler in all that little state” for the President’s Thanksgiving dinner, a tradition he carried out for more than 25 years, according to The New York Times.

In 1947, the National Turkey Federation took on the role of official turkey supplier to the President, delivering a 47-pound bird in time for the Christmas holiday.

That year, the White House also began holding a turkey receiving ceremony, usually in the Rose Garden, providing a photo op that many confuse with the beginning of the pardoning tradition. Back then, however, birds were more likely to be destined for the White House dining table than the easy life on a farm.

In 1948, President Truman said he would take the gifted turkey home to Independence, Missouri, where his 25 relatives “require a lot.”

So then when did the pardoning start?

Here’s where it gets tricky. Tales of spared turkeys date back to the Lincoln days. According to one story, Lincoln’s son Tad begged his father to write out a presidential pardon for the bird meant for the family’s Christmas table, arguing it had as much a right to live as anyone. Lincoln acquiesced and the turkey lived.

In 1963, President Kennedy decided to send that year’s gift from the National Turkey Federation back to the farm where it came from. “We’ll just let this one grow,” he said. Sometime around the Nixon administration, the President began sending the turkey to a petting farm near Washington after holding the traditional receiving ceremony and photo op, although no formal pardon was given.

President George H.W. Bush was the first to actually offer a turkey pardon.

On November 14, 1989, he announced that year’s bird had “been granted a presidential pardon as of right now.” (See a photo from this day at the top.) He sent the turkey on his way to the (perhaps unfortunately named) Frying Pan Park in Herndon, Virginia, and with that, a tradition was born.

“Thanks to the intervention of Malia and Sasha – because I was ready to eat this sucker – Courage will also be spared this terrible and delicious fate.”

“I’m told Presidents Eisenhower and Johnson actually ate their turkeys,” Obama said. “You can’t fault them for that; that’s a good-looking bird.”