Get ready to swoon over this keto pumpkin spice churros recipe 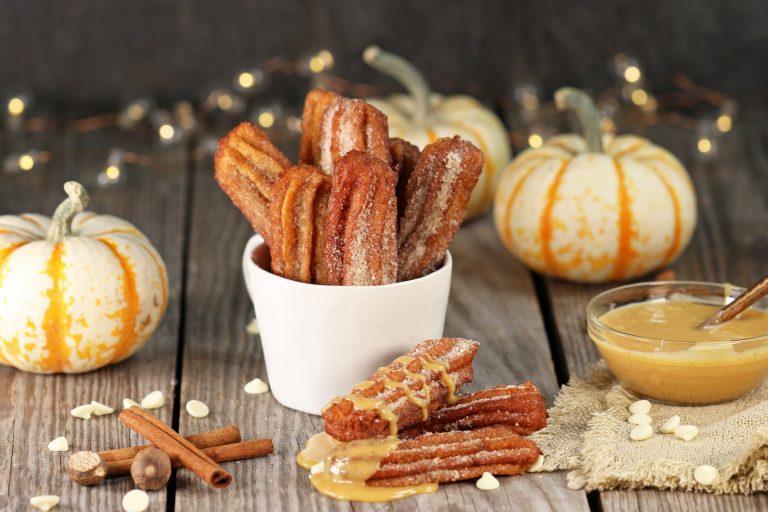 October might as well be renamed “pumpkin spice latte season.” Whether in supermarkets, cafés, or even fast-food restaurants, every well-known product line seems to be offering some sort of pumpkin spice-flavored item. The problem is, of course, the massive amount of carbs and sugar such products usually pack. A medium Starbucks pumpkin spice latte contains a whopping 12 ½ teaspoons of sugar!

Being a fan of pumpkin spice flavor and churros – but not of carbs and sugar – I decided to make one of my favorite treats in a low-carb (ahem, keto-friendly!) version, with no added sugar and the crunchy texture everybody loves.

How I developed this keto churros recipe

A traditional churro is made from choux pastry dough, which is typically very easy to make: Boil water and butter, add the flour before cooling, and beat in some fresh eggs. Flour has magical properties. In the case of churros, flour helps the pastry puff up and retain shape while frying, and get crispy on the outside without being dry on the inside. Low-carb flour replacers such as almond and coconut flour, however, don’t have those magical properties, and recipes often require a lot of tweaking.

I started by using a regular churro recipe and substituting almond and coconut flours for regular flour. The results were not crispy; they were greasy on the outside and very dense on the inside. Next, I tried adding a little arrowroot starch. This did help, but the churros were soaking up way too much oil when frying, and I just wasn’t happy with them. After about five attempts at variations of the classic choux recipe, I stepped away from the kitchen to think.

If you’ve been cutting carbs for more than a minute, you probably know about fathead dough: the gluten-free, low-carb, keto dough often used in recipes such as cinnamon rolls, pie crusts, pizza crusts, and even bread rolls and pretzels. It’s made with mozzarella cheese, almond flour and eggs. So it dawned on me: Maybe that very same dough could work for churros. I got to work developing a recipe based loosely on fathead pastry dough, and it was a success.

One tip: There’s a small amount of pumpkin purée in the dough. Don’t use too much; this will cause a dense, stodgy churro. To kick up the pumpkin flavor profile, follow the recipe for a white chocolate-pumpkin spice dipping sauce. Drooling yet?

Yes, it seems strange to put cheese into something sweet like a churro, but there are a few reasons for doing so. Mozzarella cheese has very little flavor and even fewer carbs. It helps give churros the crunchy texture on the outside while protecting the soft texture within.

When making the mozzarella mix, melt the wet ingredients in a saucepan and keep it over low heat. Or, use a microwave: Simply place the mozzarella, vanilla and butter in a microwave-safe bowl and cover with plastic wrap. This will stop the butter from exploding all over the microwave. Cook for 1 minute on full power, and check. If the contents haven’t melted yet, continue cooking at 30-second intervals until it’s fully melted.

Eggs should be at room temperature so the mozzarella doesn’t harden too quickly and become stringy, which prevents it from incorporating well. 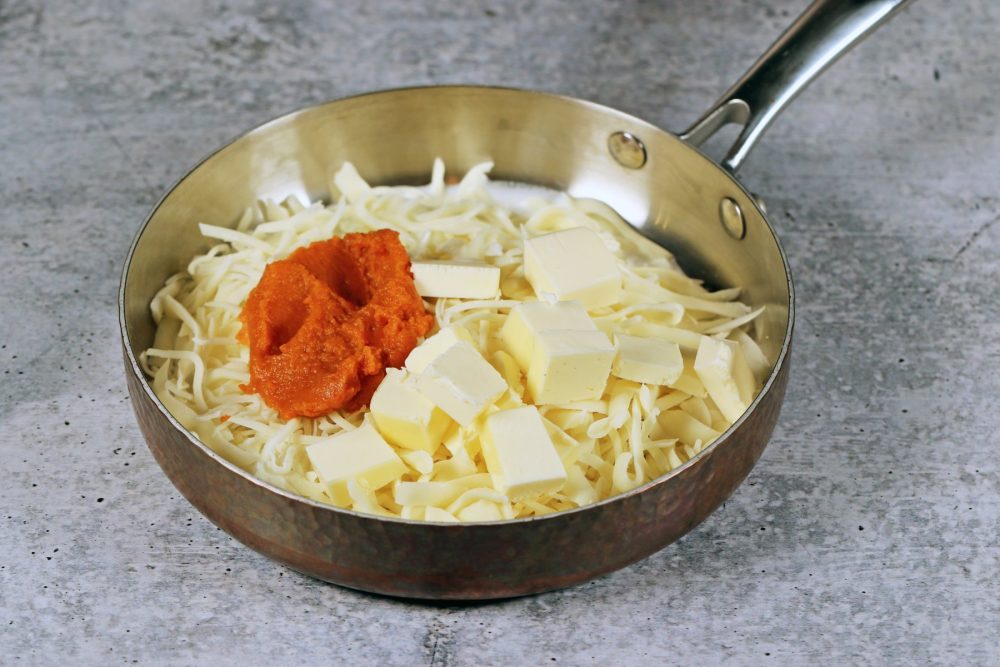 Sift the dry ingredients into a mixing bowl, and stir well. This prevents clumps in the finished dough and evenly distributes all the very fine, essential ingredients such as the xanthan gum, which increases the moisture absorption and creates a much more consistent dough. 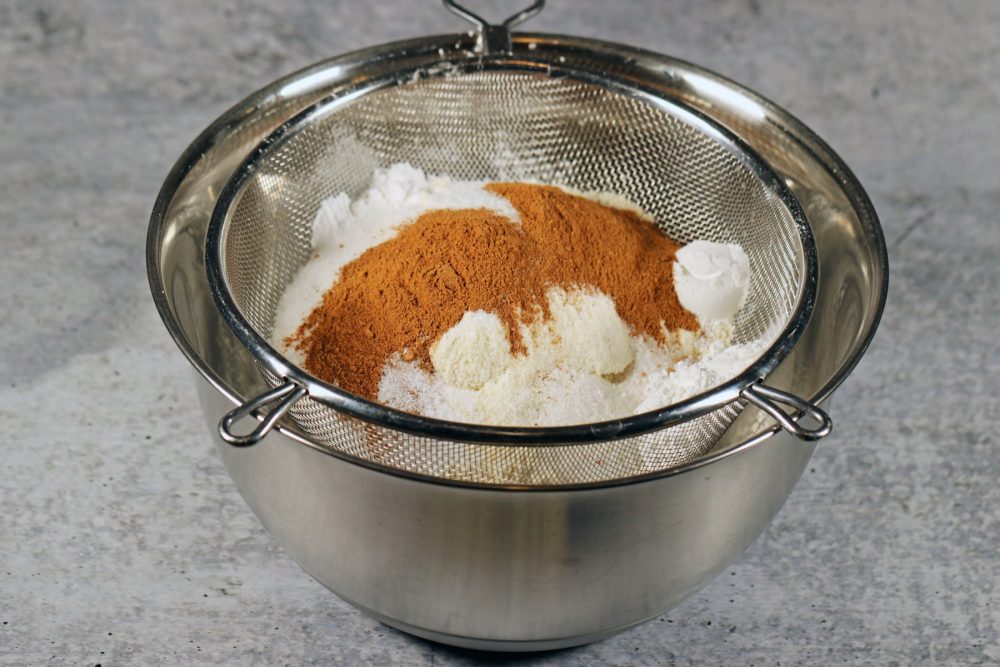 Add the mozzarella mixture to the dry ingredients

While the melted mozzarella mixture is still warm, add the dry ingredients. Using a stand mixer with a paddle attachment or a handheld electric mixer, mix the ingredients on high speed until you achieve a smooth dough. It can take a couple of minutes. 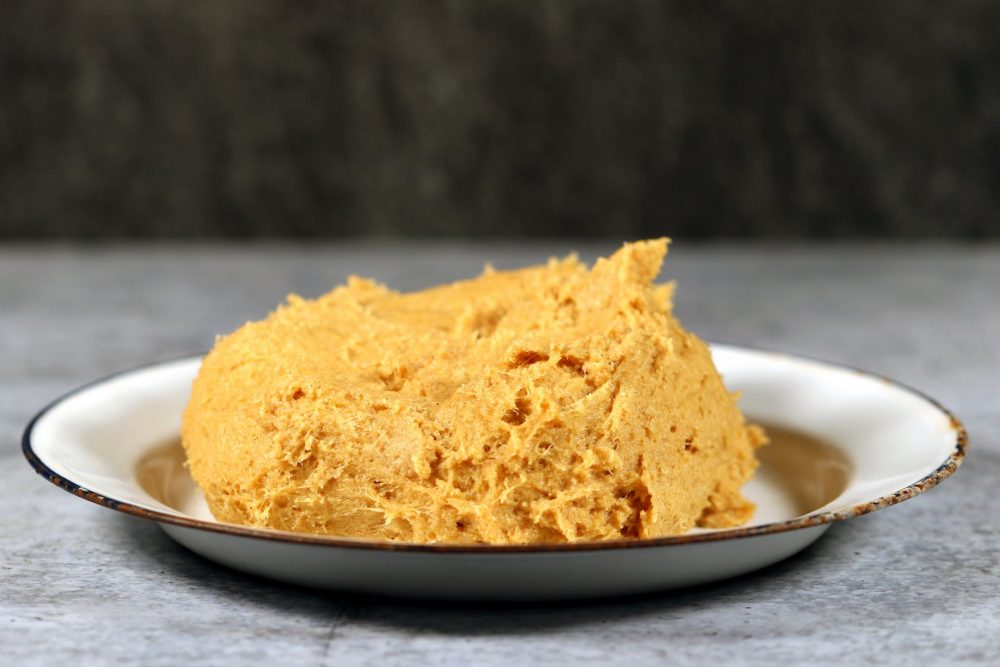 This is an essential part of the churro recipe if you want those classic ridges. If you don’t have a piping bag and don’t want to buy one, though, use the following nifty hack: Place the dough into a large, heavy-duty zip-top bag and cut off one of the corners, through which you’ll be able to squeeze the mixture into the hot oil, just like a piping bag. The only difference will be the absence of the signature ridges, but they’ll taste just as good. If you’re using a piping bag, use a star-shaped nozzle. 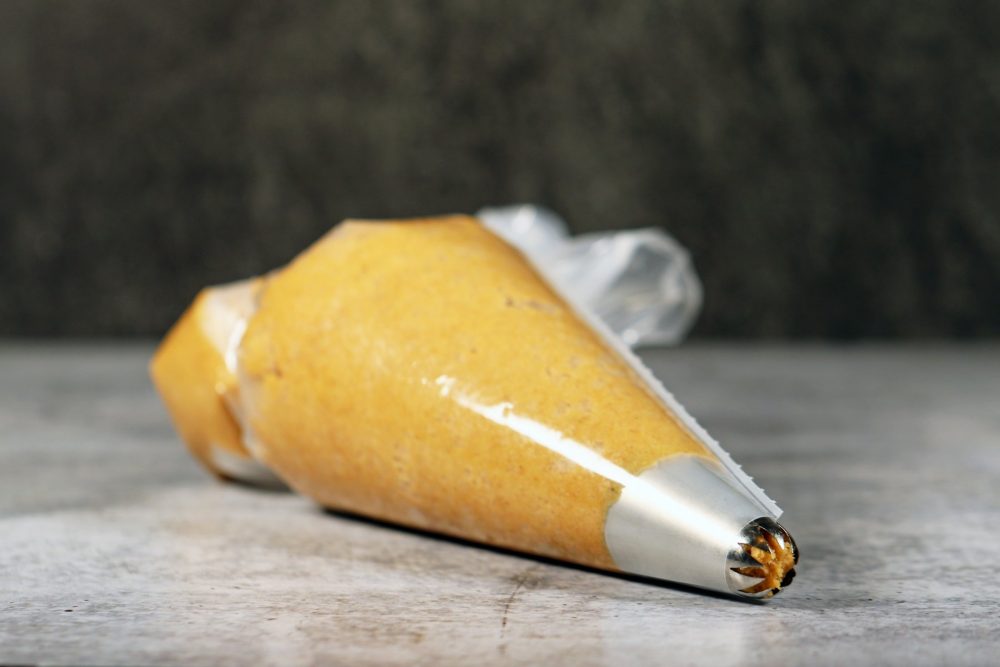 Carefully pipe the dough into the oil. I recommend cutting the dough with scissors at about 4 inches in length for two-bite churros, but you can make them as big or small as you’d like. 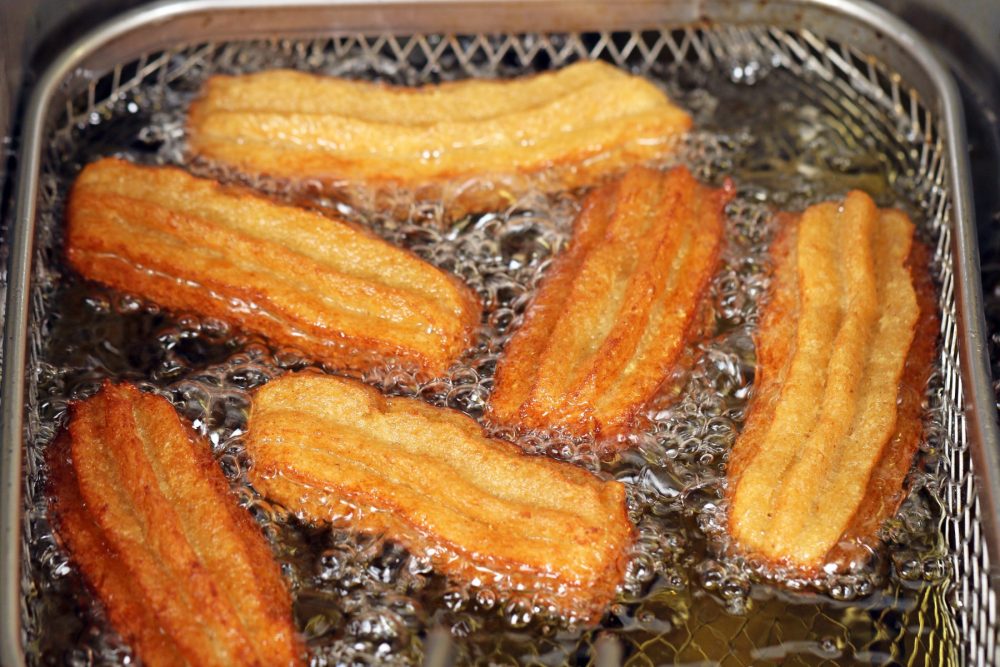 Drain the churros and sprinkle on the cinnamon “sugar” 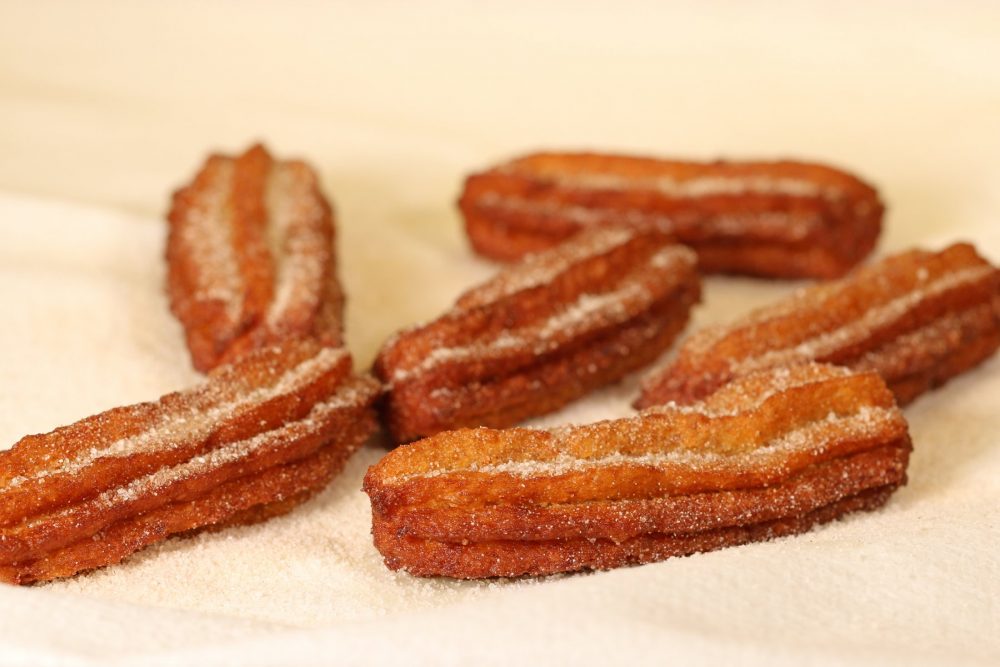 Good news: The sauce is extremely easy to make. Heat the cream and pumpkin purée in a saucepan, pour the chopped chocolate over, and whisk well until smooth and glossy. If you make it in advance or save some for later use, warm it up before serving by microwaving it for 30 seconds to 1 minute. Whisk until smooth. 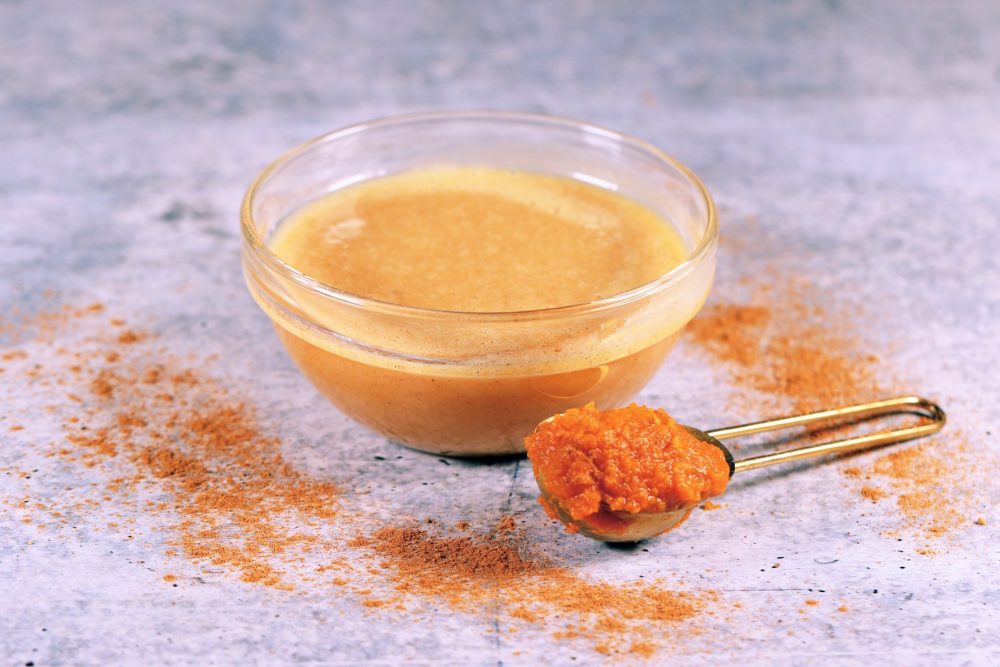 Being the co-founder of The Sola Company and the initial developer of Sola sweetener, I highly recommend this sugar substitute for sweetening all of your low-carb recipes. I created Sola because of a personal mission as a chef: To make a sweetener that actually worked like sugar in recipes. We created a sweetener that caramelizes and gets sticky, helps cakes rise and brown, and keeps ice cream soft.

Sola sweetener uses ingredients found in nature, measures 1:1 like sugar, and has been clinically tested to show no impact on blood sugar or insulin levels. Sola sweetener is composed of naturally occurring ingredients found in fruits, vegetables, and dairy, and it tastes just like cane sugar but with 75% fewer calories and 0 net carbs. Whether you are using standard cups or grams, simply replace the sugar in any recipe with the same amount of Sola sweetener.

What is Sola sweetener made from?

Sola’s ingredients include keto sweetener staples such as:

If you can’t find Sola sweetener, here are some other recommendations: 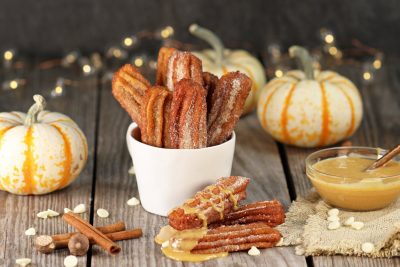 To cook the churros

Ditch the store-bought pumpkin spice. Make your own with our recipe below.