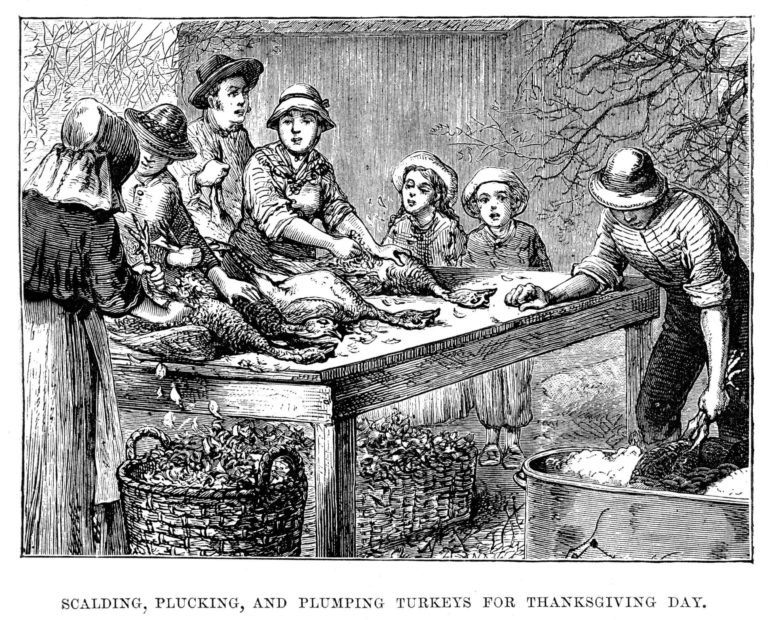 Thanksgiving in the United States is possibly the premier US family celebration, typically celebrated at home and marked with a substantial feast.

As the anchor of what is for many a four-day holiday weekend, Thanksgiving provides an occasion for family reunions, marks the beginning of the “holiday season” that continues through Christmas and New Year’s Day and, as its name suggests, affords Americans a shared opportunity to express their gratitude for plentiful food and general abundance.

Many cultures traditionally have marked a plentiful harvest with a celebration of thanks. Long before the first English settlers reached North America, Western Europeans observed “Harvest Home” festivals and the British an August 1 Lammas (“Loaf Mass”) Day, celebrating the wheat harvest.

The American Thanksgiving holiday began in 1621 with the first successful Pilgrim harvest, one that truly provided an occasion to give thanks.

The Pilgrims had arrived in 1620, crossing the Atlantic Ocean to separate themselves from the official Church of England and practice freely their form of Puritanism. Arriving at Plymouth Colony — part of today’s Massachusetts — too late to grow many crops, and lacking fresh food, the Pilgrims suffered terribly during the winter of 1620-1621. Half the colony died from disease.

The following spring, local Wampanoag natives taught the colonists how to grow corn (maize) and other local crops unfamiliar to the Pilgrims, and also helped the newcomers master hunting and fishing.

Because they harvested bountiful crops of corn, barley, beans and pumpkins, the colonists had much to be thankful for in the fall of 1621. English Puritans had traditionally designated special days of thanksgiving to express gratitude for God’s blessings. In the autumn of 1621, the Pilgrims of Plymouth Colony held their first Thanksgiving. They invited their Wampanoag benefactors who arrived with deer to roast with the turkeys and other wild game offered by the colonists. The colonists had learned how to cook cranberries and different kinds of corn and squash dishes from the Native Americans.

Thanksgiving is a time for tradition and sharing. Even if they live far away, family members often gather for family reunions. As a result, Thanksgiving marks the busiest domestic air travel period of the year. Many Americans enjoy a local Thanksgiving parade, or the annual Macy’s department store parade, televised live from New York City. Others watch televised American football, while all give thanks together for their food, shelter and other good things. Many volunteer their time to help civic groups, churches, and charitable organizations offer traditional meals to those in need.

On a more secular note, the day after Thanksgiving came in the 20th century to mark the beginning of the Christmas shopping season. During the Great Depression of the 1930s, Thanksgiving was moved to the fourth Thursday in November, which in some years lengthened that shopping period. Although the fourth Thursday of November falls on a different date every year, the president is expected to proclaim that date as the official celebration.

Turkey, corn (maize), pumpkins and cranberry sauce are symbols that represent the first Thanksgiving. These symbols often are depicted on holiday decorations and greeting cards. Corn in particular is held to represent the survival of the Pilgrim colonies. Used as a table or door decoration, corn or maize represents the harvest and the fall season.

Sweet-sour cranberry sauce, or cranberry jelly, was on the first Thanksgiving table and is still served today. The cranberry is a small, sour berry. It grows in bogs, or muddy areas, in Massachusetts and other New England states.

The Native Americans used the fruit to treat infections and the juice to dye their rugs and blankets. They taught the colonists how to cook the berries with sweetener and water to make a sauce. The Native Americans called it “ibimi,” which means “bitter berry.” The Pilgrims preferred “crane-berry” because the flowers of the berry bent the stalk over, reminding them of the long-necked crane. The berries are still grown in New England.

In 1988, a Thanksgiving night ceremony of a different kind took place at the Cathedral of St John the Divine in New York City. Among the more than four thousand people gathered there were Native Americans representing tribes from all over the country and descendants of the later immigrants.