Side hustlers: Why one woman gave up her law career for puzzles 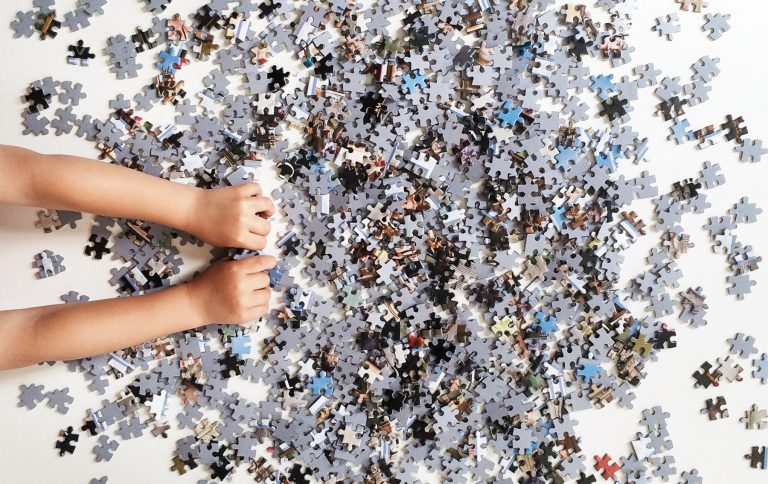 Ah, adulthood. It’s never easy and the answer to “what do you want?” constantly evolves. Does anyone ever really know what they want to be when they grow up? Is it OK to leave a life of stability for a life of uncertainty? Do dreams ever deserve to be more important than debt, bills and life roles?

For a long time, Jen Hope pondered these questions. By all outward appearances, Jen was one success story after another. She graduated with a law degree from The City University of New York. Upon said graduation, she landed a job at a boutique labor firm and, two short years later, joined the U.S. Equal Employment Commission as a trial attorney. She married a fellow attorney and skipped her honeymoon to work on a case that she eventually won in the U.S. Supreme Court. For eight years, Jen fought for the rights of little guys everywhere — and also took an enviable paycheck home. This was all #bosslady stuff.

But society’s idea of “success” doesn’t always equal happiness and Jen found herself dreaming a new dream — one that would challenge her business savvy and demand creativity. One that would require she prioritize her passion over her paycheck. And while it was scary, she jumped. In January 2018, Jen quit her full-time job as a civil rights attorney and announced her plans to start a puzzle-making side hustle. And yes, some people probably thought she was crazy.

The result of Jen’s ambition, fearlessness and determination led to the birth of Puzzle So Hard, a company that sells an assortment of puzzles designed by nontraditional artists via Amazon. And while Jen still works as a part-time attorney — let’s be real, not all dreams can pay the bills from the get-go — she continues to put more of her time and energy into the side hustle she loves most.

For our second installment of Side Hustlers, this is the story of Puzzle So Hard’s Jen Hope.

GRATEFUL: How did you become so passionate about puzzles?

JEN HOPE: I actually just stumbled onto puzzles pretty accidentally. Years ago, life was kinda coming at me hard. Family, legal troubles, all of these things all around me. And I was at a friend’s house and, like many families, there was a puzzle out on the table. I walked by, kind of perused, then found one piece and put it in. This kind of activity just really spoke to my type A personality and I was definitely hooked. It was when I came home that it just became this form of therapy for me.

It was a problem that I could actually solve. And when you’re looking for a puzzle piece, you really have to be focused on colors and patterns and shapes, not on problems and, you know, personalities and all these other things. So everything else just fell to the background and faded away. It was really, really helpful. This was something that I could do at home and I could do as much or as little as I wanted and it just kind of fit that mental space for me. But most of the puzzles that I found on the market were pretty uninspiring and cheesy. Think about bears drinking coffee, kittens playing with yarn. Let me tell you, I’ll do any puzzle, but I just felt there could be something better. Something cooler. And so I thought, “Hey, why don’t I just make cool puzzles?” I have a twin brother and he has a printing company, so together we found a few manufacturers and got pricing. I reached out to mainstream artists to license their work.

G: Why did you decide to quit your job as an attorney and start this side hustle?

JH: I was tired of fighting piles of garbage about piles of garbage. Not all lawyers are, but the stereotypes are often true. I loved the team that I worked with, but sometimes it just gets to be enough. Like, why are we fighting over paper and electronic data? There was a lot of energy that wasn’t materializing. To me, the opposite of that adversarial approach is doing something that brings people together. Puzzles do that. Whether it’s bringing people together with others, like a friend or family member, or with just yourself. It was something that allowed me to slow down and just refocus on what I was feeling. Oftentimes I’ll puzzle with friends and it’s a great way to throw back with a glass of bourbon and get intimate.

G: How did you get the courage to make a big change like that?

JH: Everyone says that no one does anything alone, and that’s definitely true of quitting my job. I have a partner who was incredibly supportive, [but] I am also a planner. I don’t think many people begin a side hustle or begin any type of entrepreneurial venture without planning. It’s the hallmark to any good venture. So, I looked at all the numbers [and thought], “How do I make this work?” To be honest, it happened six months faster than I thought it would. I had intended to wait until June of last year to quit my job, but it was New Year’s and I went to a friends brunch. While I was there, I met these badass women and one of them managed coders. Another one was an angel investor. While she doesn’t fund consumer goods like mine, she works with tech. It felt like meeting those two women in this space and at this time was just good timing. It felt like a sign. So I went home and crunched more numbers and then the next day I went to work and gave notice.

Deer 🦌 me oh my. I may not be able to get to Croatia 🇭🇷 to see this rad mural “Totem” by @farid_rueda in person, but I can recreate it in my home and stare at all its gorgeousness. 😊 Or have it peeping on my shelf or coffee table looking fine in design. Use code TOTEM for 20% off 💰 this and your entire order through Friday (link in bio). • • • • • • #mural #streetart #graffitiart #sprayart #urbanwalls #art #streetartistry #streetarteverywhere #puzzlesohard #faridrueda #perfectgift #uniquegifts #giftforpuzzlelovers #giftforartlover #giftideas #giftforhardtobuyfor #boxdesign #bookdesign #homegoods #coffeetabledecor #homedecor #puzzle #jigsawpuzzle #rompecabezas #puzzletime #everydayimpuzzlin #1000pieces

G: What would you tell someone who is miserable at work and feeling like they’re stuck?

JH: Make a plan. I definitely wouldn’t tell them to quit right away, even though that is definitely how we feel a lot of times. Build a plan and talk to people around you. Generally we don’t become happy at our jobs overnight, and I think the same is true for exiting our jobs. Not everyone is lucky enough to have someone in your life who can support you financially. I can’t emphasize enough how important it is to plan.

G: Can you share a story or personal moment you’ve had in your puzzle-making career where you knew you were making an impact?

JH: Last Saturday I got a really long email from this guy after someone had made a random post about one of my space puzzles on Reddit. He ended up purchasing a puzzle and, with all of my puzzles, I usually like to include a handwritten note. He wrote me this email back that was so sweet. He was so sweet and hit all of the things that I wanted to do with my puzzles, in terms of design, in terms of quality, all of these things. Making connections with strangers like that is super motivating and empowering. It gives you a point of reference to say, “I absolutely created something out of nothing. Here is someone in the world who I didn’t know before and now we have a relationship and this person appreciates and gets what I do.”

G: Would you consider working as a full-time attorney again while managing your puzzle business?

JH: My plan is to not be doing law when the puzzles become profitable, but I will always volunteer. I’m currently a volunteer with the support center for child advocates, and there are a ton of organizations that I hope to work with in the future. I am connected to the law. It’s an incredible privilege to be able to practice law, and it is an obligation to give back. I will continue to volunteer, [although] my goal is to puzzle full-time.

G: What are three things you think people should know before starting a side hustle?

JH: Be prepared for the loneliness [and] plan as much as you can before doing anything — money, operations, all of the things that you could possibly do. And also, I don’t follow this as much as I should, [however], be kind to yourself because it’s easy to feel overwhelmed that you’re not making progress. Most of the time you are and you just can’t see it yet.

MORE: Ask the Pros: 5 things a minimalist says you should get rid of right now

G: If you could sum up your business goals in one sentence, what would you say?

JH: My business goals are to connect with people, that’s first and foremost. I do that through puzzles. I [also] have a pretty robust strategy for growth. I have such great ideas for kids’ puzzles it makes me crazy. And collaborations with other businesses, those kinds of things. My next step is to seek funding, which is something that everybody’s gonna come up against. We had a pretty decent first holiday season. We got product in November and just this past month I sold out of one of my first puzzles, which is totally great. Now I’m like, “Oh, I need more puzzles.” I need funding and I’d love to find an angel investor to see what I’ve been able to do in a really short period of time to provide me with the wings and the runway to fly. At the backend I would absolutely make her investment worth it. But, yeah, my goal is to bring puzzles to the masses.

This guy throws axes for a living. Check out his side hustle turned full-time career in the video below.