The top U.S. trends that changed fashion history as we know it 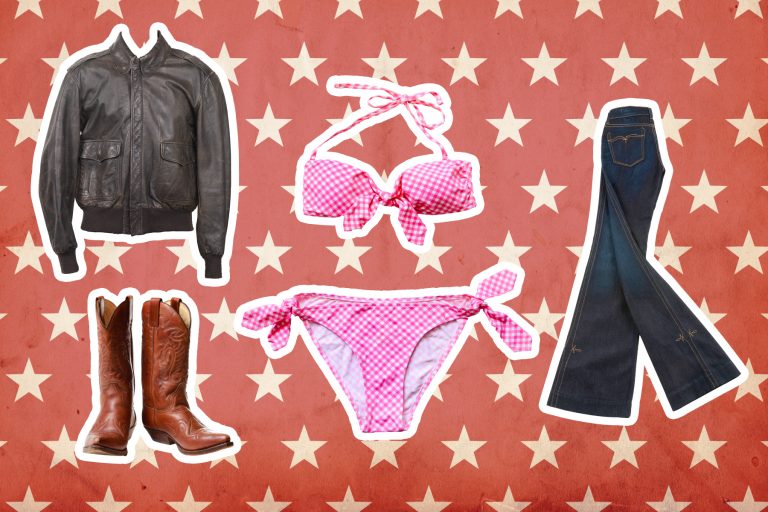 America, the land of the free — a country that embraces self-expression and individuality. As U.S. history evolved, so did our wardrobes. Yet it seems some styles have stood the test of time. In honor of the Fourth of July, we wanted to round up what we believe are some of the most memorable American fashion trends to date.

Let’s start with denim, an American staple. Jeans were invented in 1873, but they really gained popularity in the 1950s when James Dean wore them in Rebel Without a Cause.

This fabric has been altered to accommodate every wash and silhouette you can imagine, from low-rise bootcut, to high-rise skinnies. It has evolved into jackets, dresses, and more. No matter how it’s donned, there’s something about those blues that feel so synonymous with American fashion trends.

Popularized by Ralph Lauren in the 1970s and ‘80s, the polo shirt’s crisp tailoring nodded to all-American prep style that could be worn everywhere from the golf course to special occasions. Its simplicity and timelessness have meant it has remained a constant in both men and women’s wardrobes since its debut, and it doesn’t seem to be going anywhere anytime soon.

Believe it or not, the bikini has its roots in American wartime. This was due to the U.S. Government enforcing “fabric rationing” in 1943. A few years later, the bikini took form when designer Louis Réard introduced the bikini style as we know it today, and its name was derived from the site of American nuclear tests, which were performed at Bikini Atoll.

MORE: The history of wine in America

With the rise of bikinis, it only made sense that the less-is-more mentality eventually led to mini skirts. Once seen as controversial, this silhouette plays a big role in fashion history because it was a symbol of women’s empowerment in the 1960s, until it eventually became an American fashion trend no one thinks twice about.

The iconic cowboy boots were originally crafted in black leather with a low Cuban heel in Coffeyville, Kansas, around the 1870s. Eventually as the Wild West became a common theme in movies and radio shows, naturally the boots found their way into the fashion world during the 1920s and 1930s. Today, it seems as though if you’re not from the West or the South, the cowboy boot is a fashion statement you either have a love or hate relationship with, but as the runways and time has shown, love or hate them, these boots are still walking.

From ‘80s workout videos to present-day athleisure, need I say more? Leggings, a God-send for people like me who avoid pants at all costs, once started out as a design specific to working out and have evolved into an everyday pant.

Once considered “plimsolls” and made with no particular right or left foot, these evolved into what we know sneakers to be today in approximately 1892, when the United States Rubber Company created a more comfortable rubber sneaker with canvas tops.

By 1917, canvas sneakers were mass-produced, and they’re now worn in the gym or even with a sundress. And fun fact: They got their name because they were so quiet that a person wearing them could “sneak up” on someone.

First introduced by Brooks Brothers in 1896, the button-down shirt was designed based off the shirts worn by polo players, and was used exclusively as a sports shirt until the 1950s in America. Eventually, the shirt graduated from sports to all-American style, available in every fit and color for both men and women.

MORE: Matching 4th of July outfits for you & your dog

And last but not least, the leather jacket. It was first conceived in the early 1900s in the form of brown flight jackets donned by aviators and members of the military. During WWII, these flight jackets evolved into the “bomber jacket,” and ever since, they have become the ultimate means for exuding timeless, cool style.