15 most romantic movies to watch on Valentine’s Day 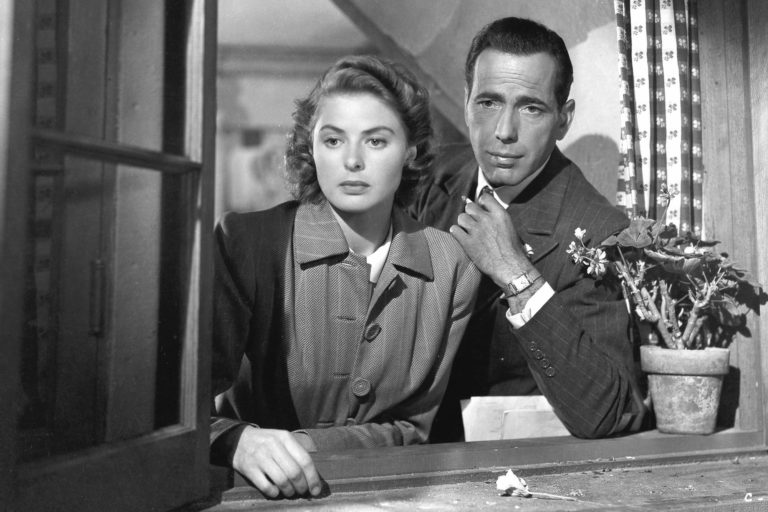 Make it a date night at home this Valentine’s Day and binge-watch romantic movies until the wee hours of the morning. Our list of the 15 most romantic movies to watch on Valentine’s Day spans the decades. From timeless love stories and musicals, to fairy-tales and contemporary love comedies, choose one or a few of the following movies to put you in the mood for love.

The iconic romance movie that beats all other movies in this genre, Gone with the Wind will give you and your date a long date night of love and war and more love. This epic historical film, which lasts nearly four hours, is set in the Civil War era in the American South. Its lead characters are Southern belle Scarlett O’Hara (Vivien Leigh) and debonair Rhett Butler (Clark Gable), who ultimately fall in love despite other romances and multiple tragedies in their lives.

Another classic World War II romance, Casablanca stars the handsome Humphrey Bogart as Rick Blaine, who owns the hottest nightclub in town, and the timeless beauty Ingrid Bergman as Ilsa Lund, who was Blaine’s old flame. Lund shows up with her famed rebel husband Victor Laszlo, played by Paul Henreid, who wants to buy special papers that Blaine has in his possession. The papers would help the couple get out of northern Africa and enter America, escaping the Nazis. Things get complicated and though Blaine deeply loves Lund, he agrees to help them out. Warning: This love story doesn’t have the “happily ever after” ending, but it will show you just how far someone will go for the one they truly love.

If you and your partner are Alfred Hitchcock fans — or want to become fans — Vertigo is the Valentine’s Day movie for you. It’s a thrilling romance about former detective John “Scottie” Ferguson, played by Jimmy Stewart, who is hired as a private investigator to follow Madeleine Elster, played by Kim Novak. The former detective must face his fear of heights and vertigo to figure out why Madeleine is in danger and needs to be tailed. After a suicide, madness and mystery, Ferguson becomes obsessed with Madeleine and ends up cracking the case. This is a psychological thriller that will keep you and your Valentine’s Day date on the edge of your seats.

This romantic tragedy musical is a modern day Romeo and Juliet story set in the gang-ruled Upper West Side of New York in the late 1950s. An American white gang, the Jets, and a Puerto Rican gang, the Sharks, vie for control of the neighborhood. Things get complicated when a Jet, Tony (Richard Beymer), and Maria (Natalie Wood), the sister of the leader of the Sharks, fall deeply in love. Forbidden to be together, the two must meet secretly, passionately singing their emotions and sharing hidden moments. Tragedy befalls the couple because of hate, but in the end, the message is love wins. Once you watch this movie, you’ll be singing or humming its passionate soundtrack for weeks to come.

Grease is the movie that will make you want to get up and dance with your date. A romantic comedy-drama, this musical is set in the 1950s and depicts the lives of tough boy Danny, played by John Travolta, and demure foreign exchange student Sandra, played by Olivia Newton-John. The two high-schoolers develop an unlikely attraction for each other and sing their way through the drama of a teenage romance between a greaser and a goody-goody. The fun heartwarming ending to this film makes it a great date night movie on Valentine’s Day.

One of the most charming romance movies, Dirty Dancing stars Patrick Swayze, who plays Johnny, a resort dance instructor, and Jennifer Grey, who plays Baby, a young guest at the resort. Johnny and Baby become dance partners and fall in love. Despite Baby’s father forbidding them to see each other, the lovestruck couple perseveres through the challenges of their secret romance and ultimately gets what they want — to dance together, be together and live happily ever after with the blessing of Baby’s father. Get ready to be inspired to do some dirty dancing of your own.

If fairy-tales are more your thing, The Princess Bride is a must-watch for Valentine’s Day. A Rob Reiner film, this adventure romance story comes to life with sword fights, monsters, giants, pirates, heroes and love. The tale is about Buttercup (Robin Wright), a farm girl who is betrothed to an evil prince even though her true love is presumed dead, and Westley (Cary Elwes), a hired farmhand, who indeed is not deceased. Buttercup is kidnapped by pirates, pursued by the odious prince and saved by none other than Westley.

Another Rob Reiner film, When Harry Met Sally is a romantic comedy that follows the lives of Harry (Billy Crystal) and Sally (Meg Ryan) as they figure out if a man and woman can really be just friends. This movie will have you laughing until you cry and it will give you hope that if there is a special someone who is just a friend, there may be a day — even if it is 12 years later — that the two of you will fall madly in love.

Disney’s musical romantic fantasy cartoon Beauty and the Beast is based on the French fairy-tale about the Beast, a handsome prince who is turned into an ogre due to his arrogance, and Belle, the beauty who the prince takes prisoner in order to break the curse. The Beast must not only learn to love Belle but to also gain her love in return or else he stays a monster forever. Paige O’Hara and Robby Benson voice the main characters.

One of the most epic love stories, Titanic is an action-packed romance set on the maiden voyage of the historical RMS Titanic. The movie depicts a fictionalized version of the sinking of this famous luxury liner. Leonardo DiCaprio plays Jack, a poor artist who falls in love with Rose, played by Kate Winslet, a first-class passenger. The two are from different social classes but fall crazy in love. The lovers have a passionate romance before, during and even after the Titanic hits an iceberg and sinks to its ruin.

Take a Valentine’s Day trip to Paris by watching the musical romantic comedy Moulin Rouge, starring Nicole Kidman as Satine, a stunning courtesan and cabaret dancer, and Ewan McGregor as Christian, a young English poet who is enamored with Satine. Set in 1900, Satine is pursued by a wealthy duke who finances the show and is enraged that Christian has the dancer’s heart. The show must go on, but it has an unexpected end when tuberculosis claims one of their lives. The final message is that they have a love that will live forever.

When Nicholas Sparks writes a romance novel that becomes a movie, you can be sure that the film needs to be on your Valentine’s Day movie list. The Notebook, a story set in 1940 in South Carolina, stars Ryan Gosling as Noah, a poor quarry worker, and Rachel McAdams as Allie, a young heiress. The two meet at a carnival and have a forbidden summer romance that ends abruptly yet burns in both of their hearts for years. The couple is later reunited in ways that only Sparks can bring to reality.

If love is meant to be, not even cancer can get in the way. The Fault in Our Stars is a tear-jerking romantic tragedy film about two teenagers — played by Shailene Woodley and Ansel Elgort — with cancer who meet at a cancer support group, fall in love and embark on a life-affirming journey to meet a reclusive book author. Woodley’s character Hazel Grace has thyroid cancer that has spread to her lungs. Elgort’s character Augustus has lost a leg to bone cancer. They bond strongly and share a special love that endures illness and death.

A contemporary comedy romance, this movie will have you laughing all night. Crazy Rich Asians is about native New Yorker Rachel Chu (Constance Wu) and her boyfriend Nick Young (Henry Golding) who go to Singapore for a wedding. Rachel is giddy to go to Asia and meet Nick’s family, who turns out to be crazy wealthy. Though money can buy a lot of things all over the world, this couple proves that it can’t buy love.

Bradley Cooper and Lady Gaga star in this musical romantic melodrama. Cooper plays Jack, a hard-drinking, drug-addicted country musician, who falls in love with Lady Gaga’s character, Ally, a nightclub musician who feels like she isn’t good enough to really succeed in music. Jack sees Ally’s talent and encourages her to tour with him. The two get married and experience musical success before one of them meets a tragic end. But their love remains in the music.