A recipe inspired by Budget Bytes 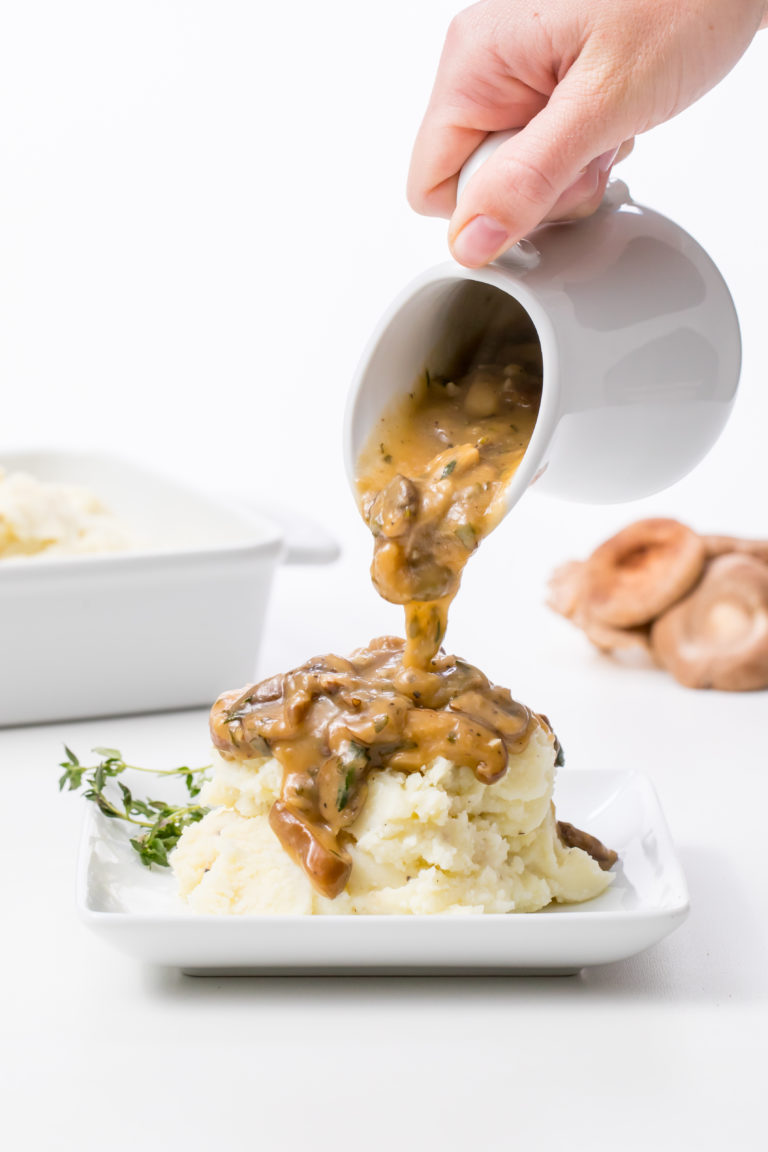 Preparing a meal and need gravy right now? How about a holiday-caliber recipe that doesn’t require cooking a turkey or a roast for hours? Here’s a mushroom herb gravy inspired by Budget Bytes you can whip up in a flash.

Gravy is, at heart, a sauce: a flavorful liquid, such as juicy meat drippings or meat-based stock, thickened with flour and seasoned with salt and pepper to taste. Homemade or canned broth is also a go-to liquid if meat drippings are unavailable. Fresh herbs and spices add gusto that can complement the rest of a meal.

MORE: It’s easy to make the best basic turkey gravy right in the pan – here’s how

A delicious twist from traditional meat-based gravy, this mushroom herb version is rich with earthy mushroom flavor and a fresh herb infusion. It’s a delicious option for the vegetarians at your table.

Ready to get to the gravy? Melt some butter in a large skillet and stir in minced garlic. (Butter and garlic make everything better!) Add mushrooms and sauté them until they’re soft. Mushrooms naturally release moisture as they cook down, so keep cooking until most of the moisture has evaporated. (Eating vegan? Simply swap in your favorite cooking oil for the butter.)

Sprinkle flour over the mushrooms and cook, stirring often, until the flour turns a golden brown. Whisk in the vegetable broth and scrape any browned bits up from the bottom of the skillet. Whisk until all of the flour is incorporated into the sauce. The flour will start to thicken the broth.

Stir in the fresh thyme, rubbed sage, salt, and pepper. Simmer the gravy, whisking often, until it reaches the desired thickness. Then, get this mushroom herb gravy to your table and serve it hot.

A word about mushrooms

Button mushrooms and brown cremini mushrooms are the most readily available and bring a mild earthy flavor and pleasing texture to this gravy. To make an even more flavorful gravy, however, go for gourmet mushroom varieties such as morels, shiitakes and porcinis to impart distinct earthy flavors.

Mushrooms are magical. So versatile, delicious and with the ability to add umami flavor to just about any dish, making it a good meat substitute in many instances. 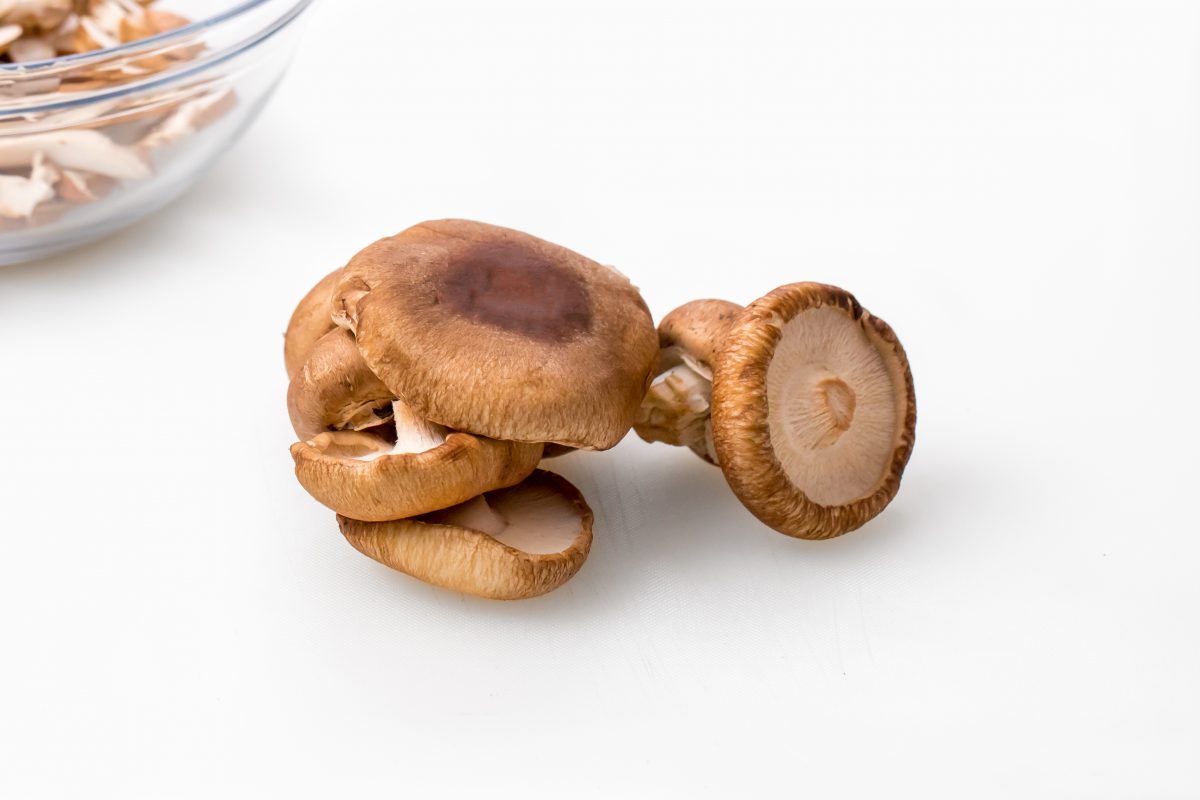 Do not rinse your mushrooms under water; they will begin breaking down immediately. Instead, gently wipe the fungi with a damp paper towel to remove dirt. 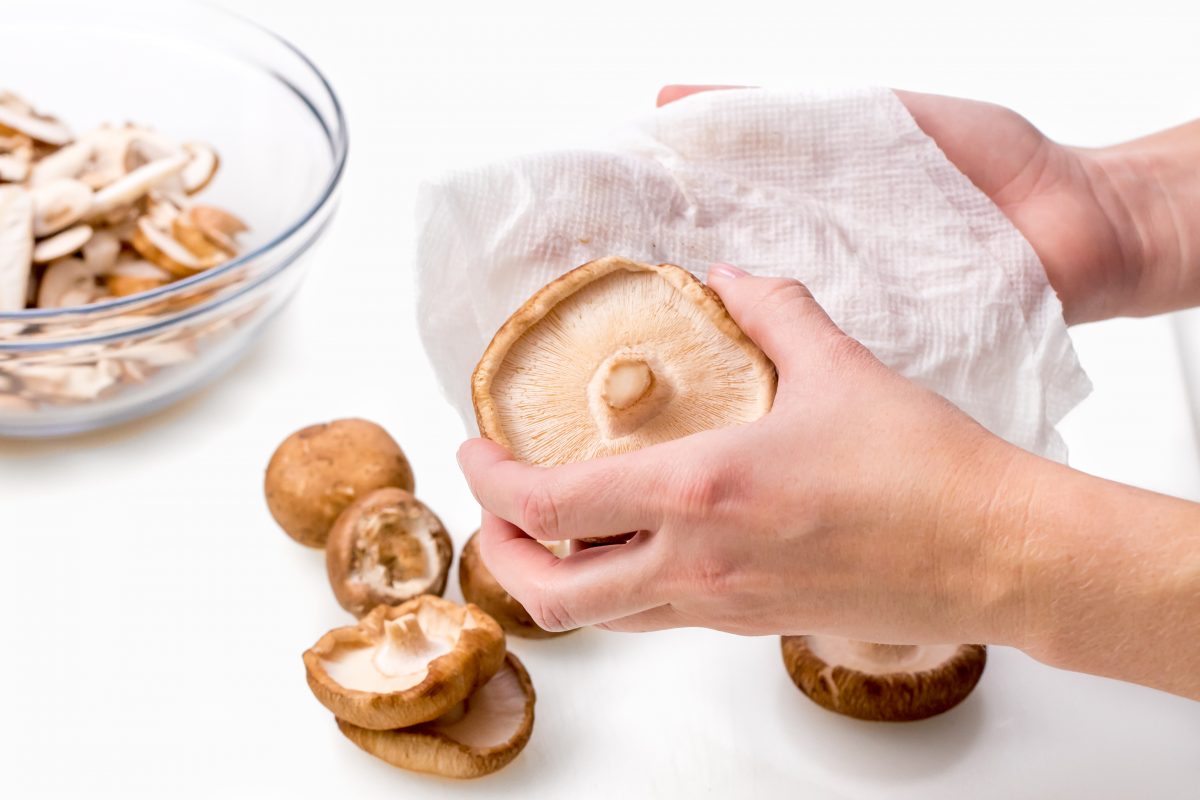 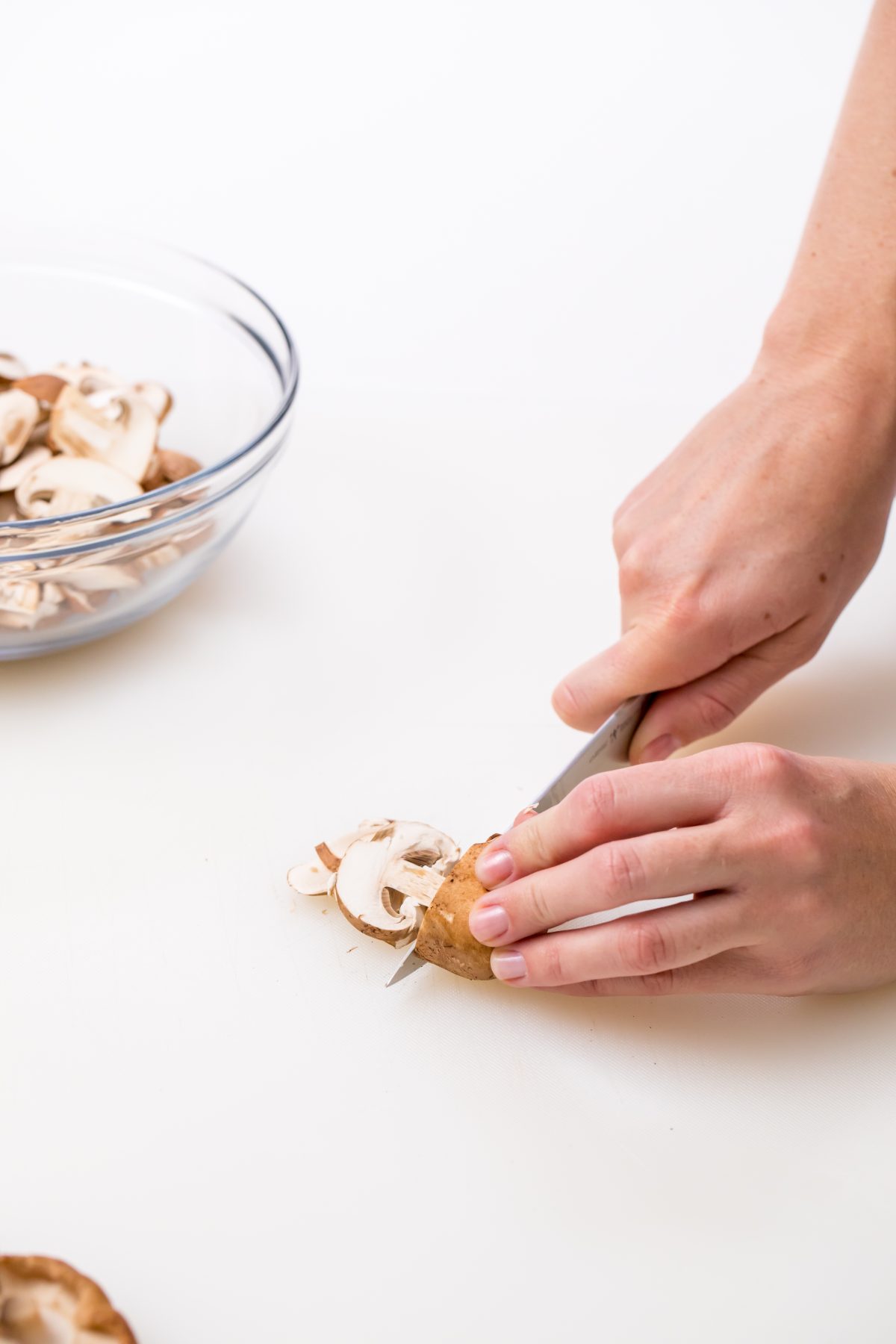 Add garlic to melted butter and saute until fragrant

Be sure not to overcook garlic as it can become bitter. 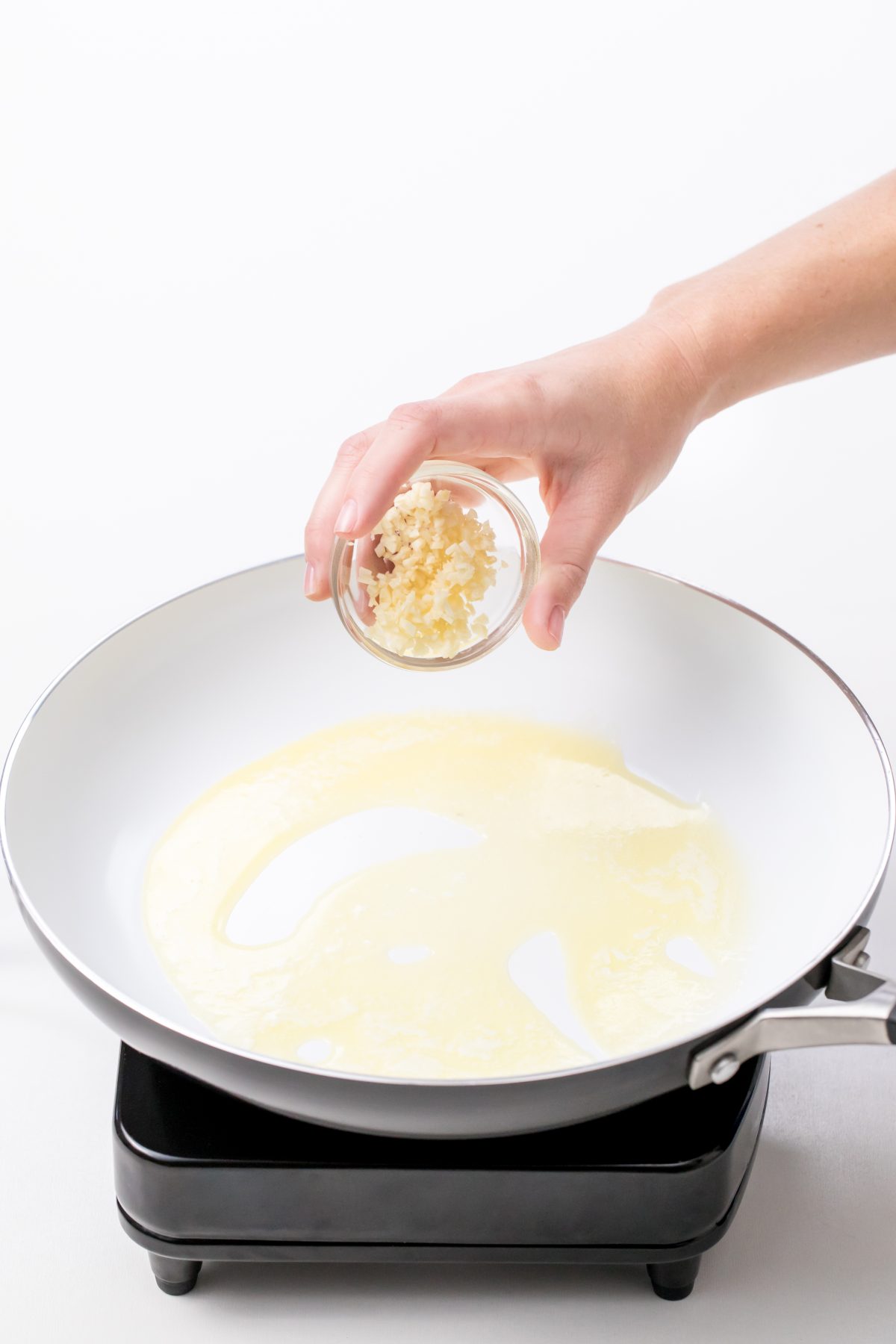 Add sliced mushrooms to garlic butter and stir until they become soft.

Allow mushrooms to cook down fully, releasing their water. 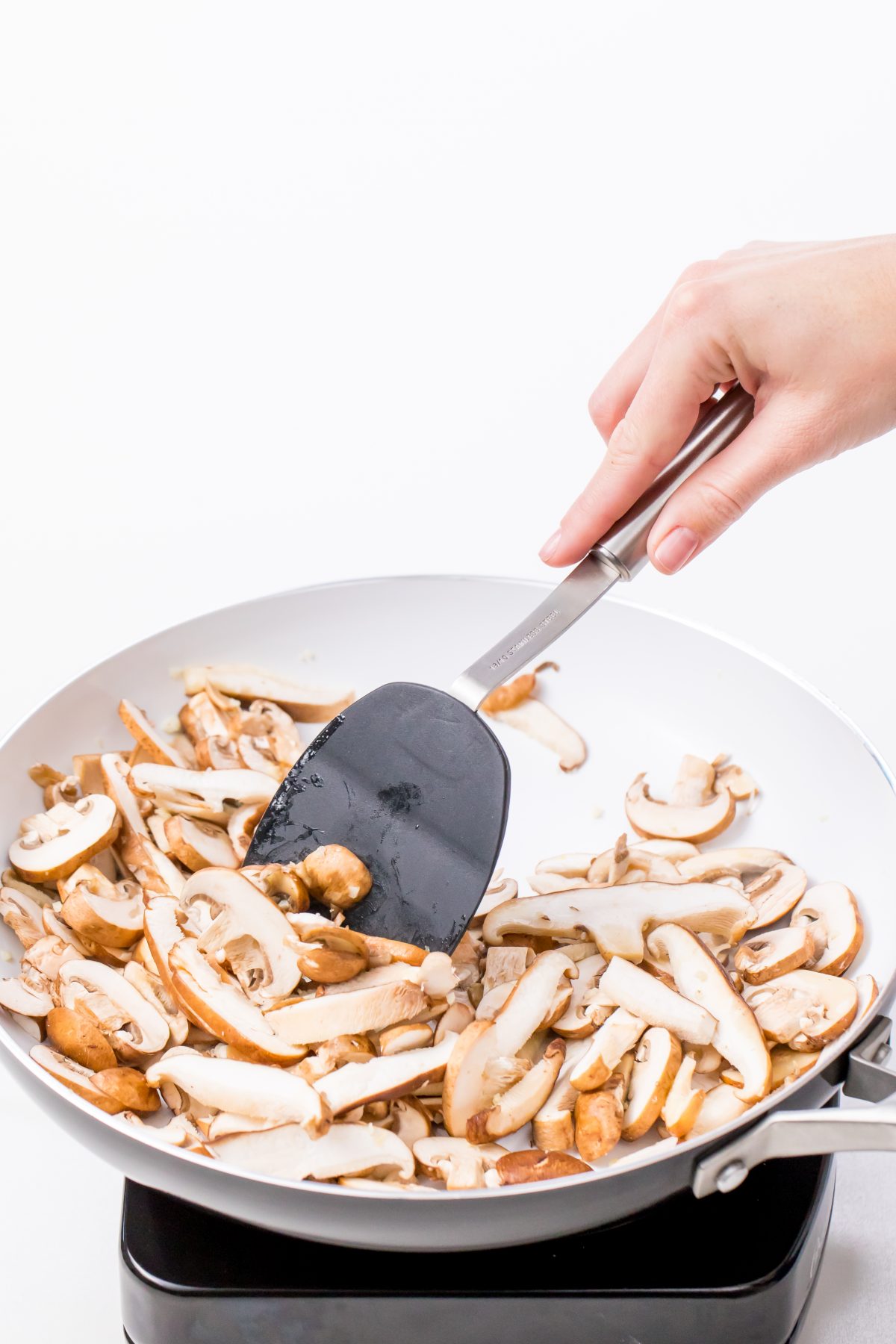 Flour is what will thicken this dish, taking it from a sauce to a gravy. Give the flour a minute to cook and absorb the juices and butter. 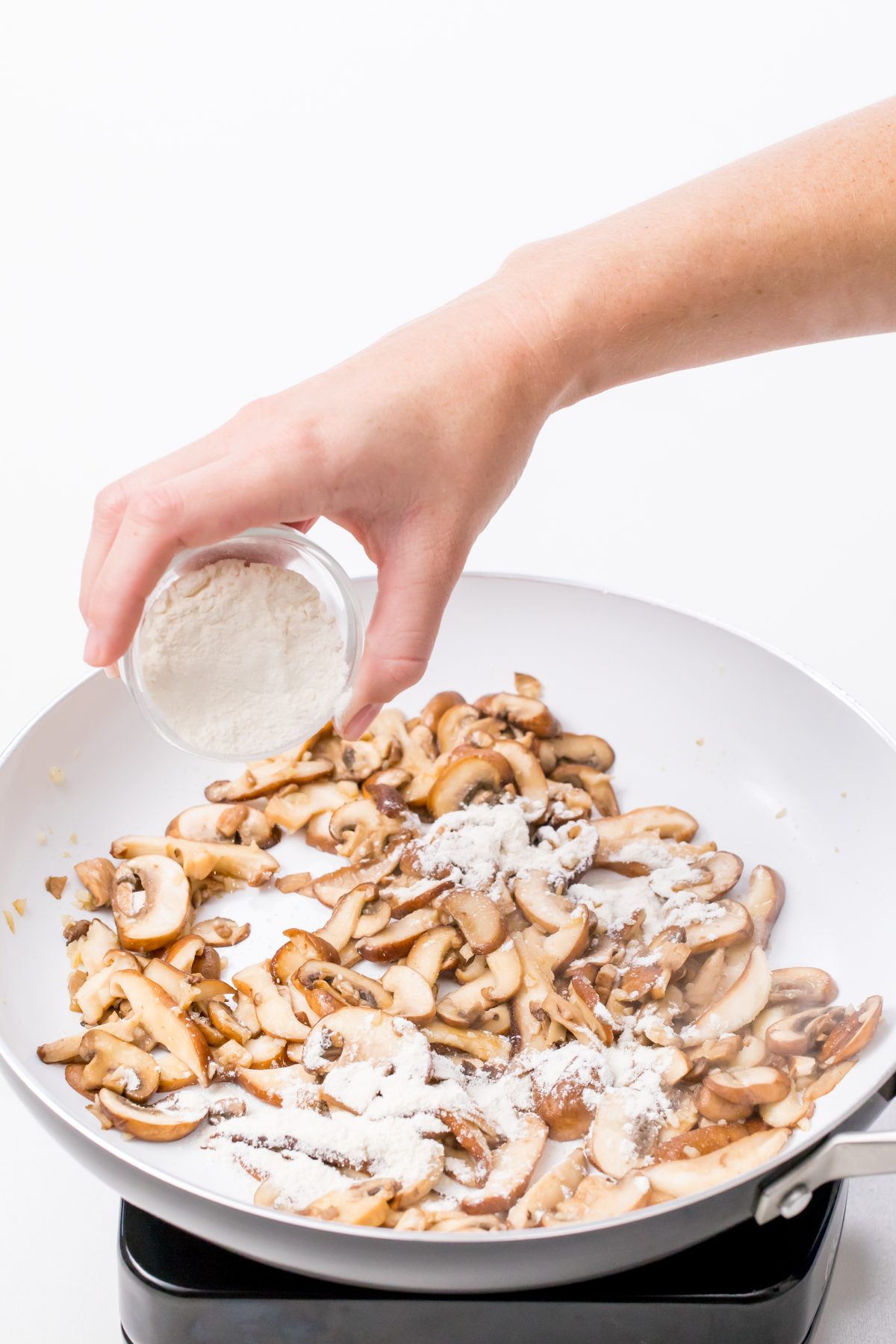 Add broth to mushrooms and whisk until incorporated

A good quality broth can go a long way. You can either make your own or buy one from your local market.

Earthy herbs work well here with the taste of the mushrooms. 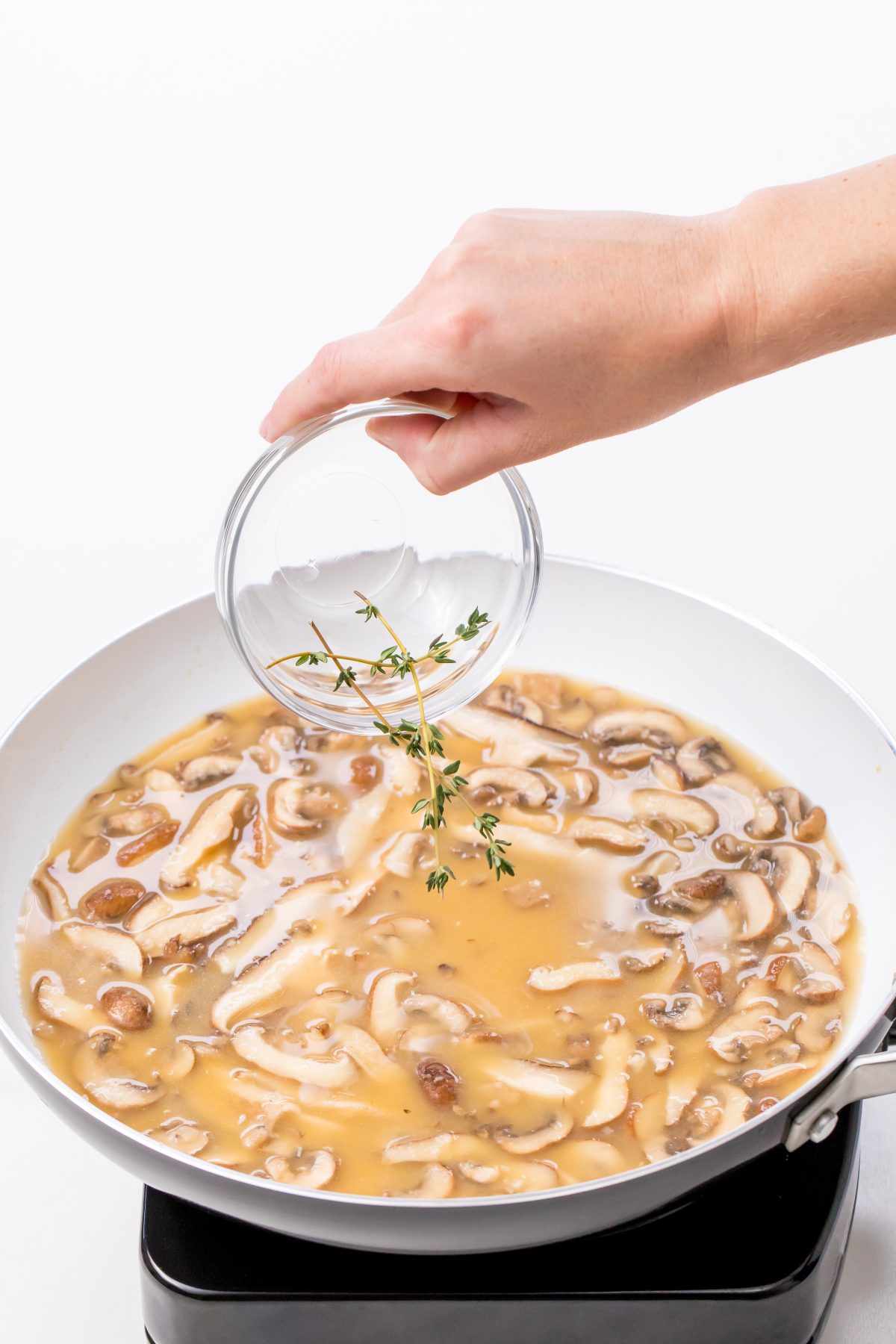 As the broth simmers, it will thicken into gravy

Keep an eye on this as it cooks. It can easily turn to a boil, but you want to keep it at an easy simmer. 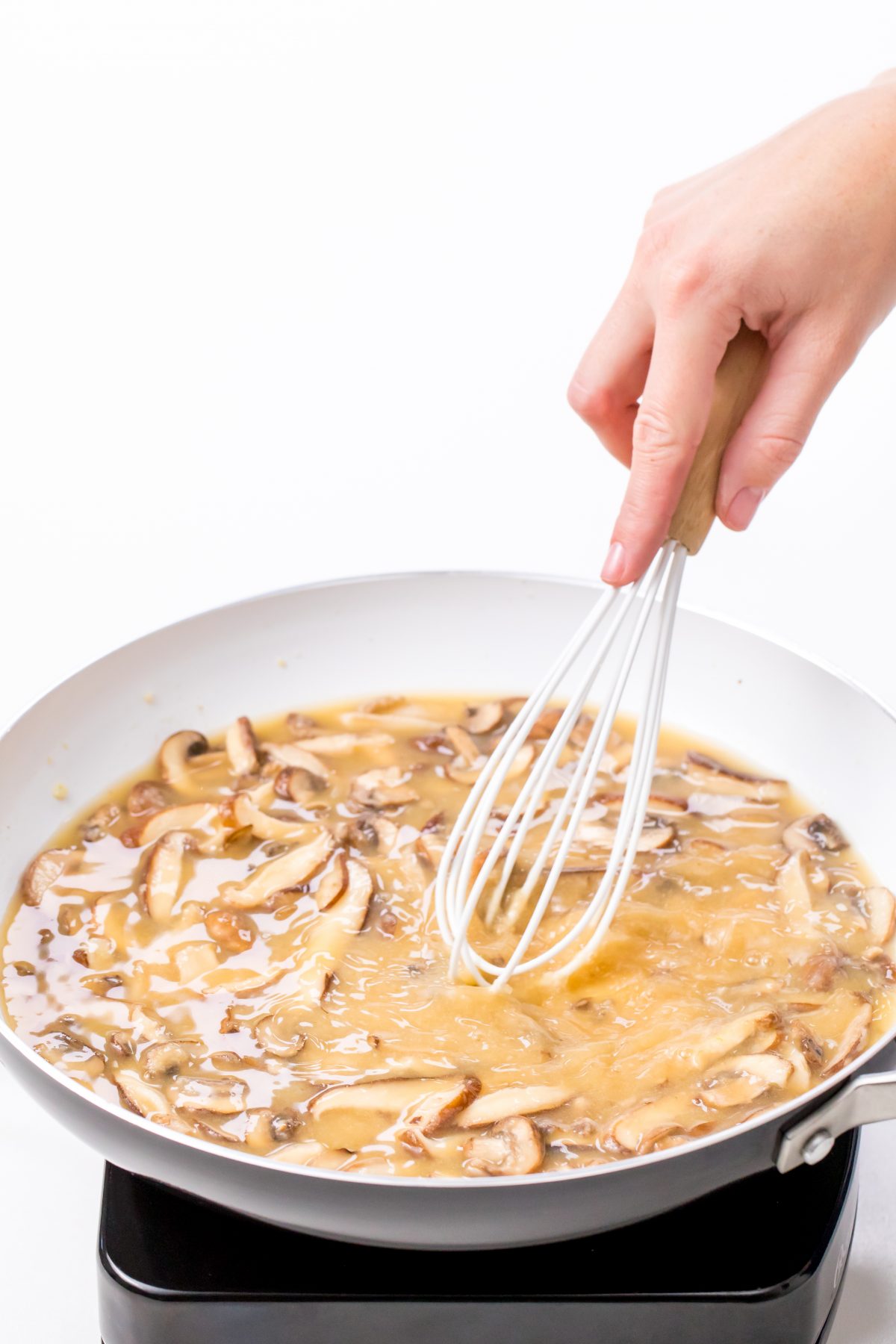 Beautiful flavors melding together into a perfectly vegetarian gravy. Who knew? 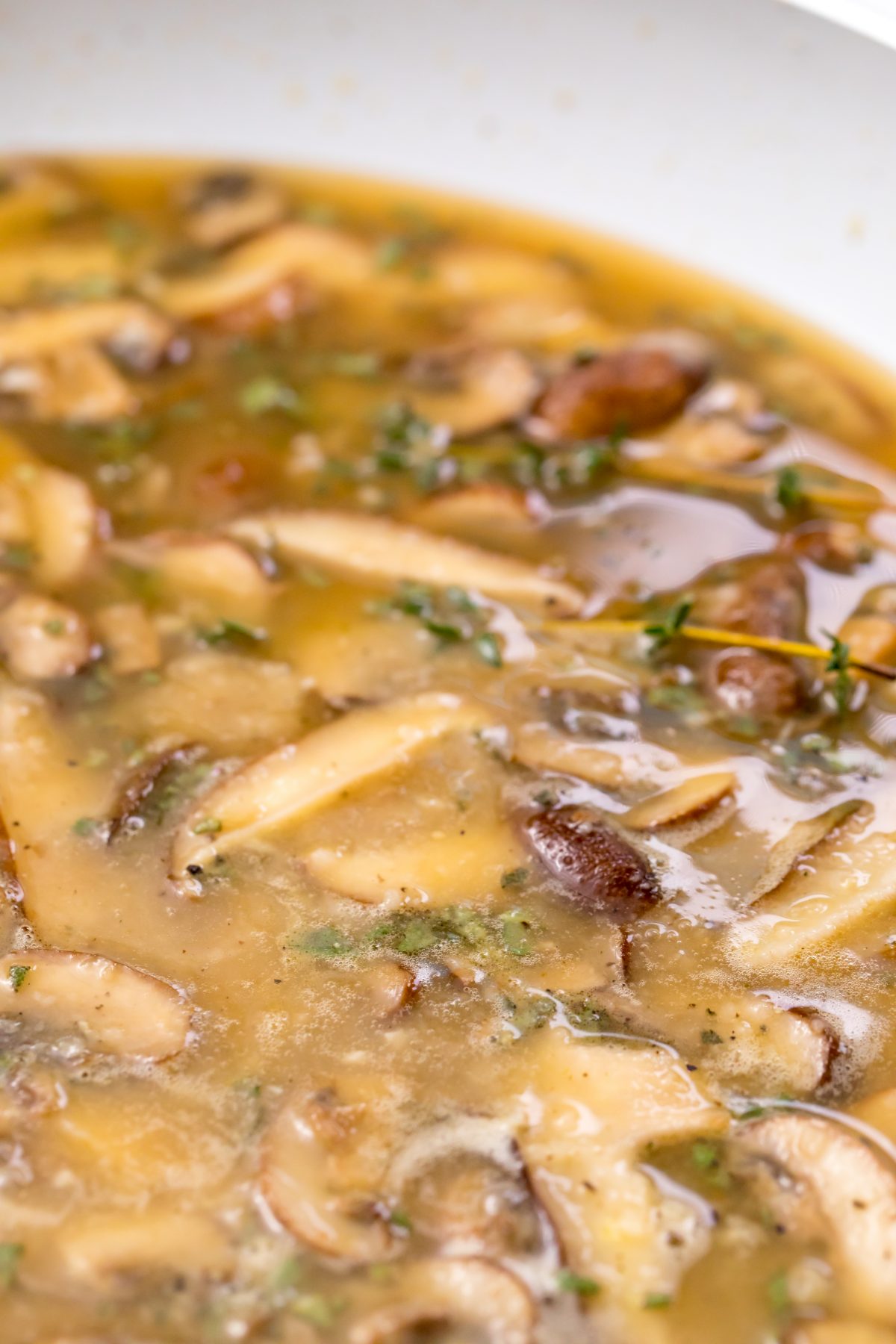 We have a feeling even meat-lovers are going to dig into this one! 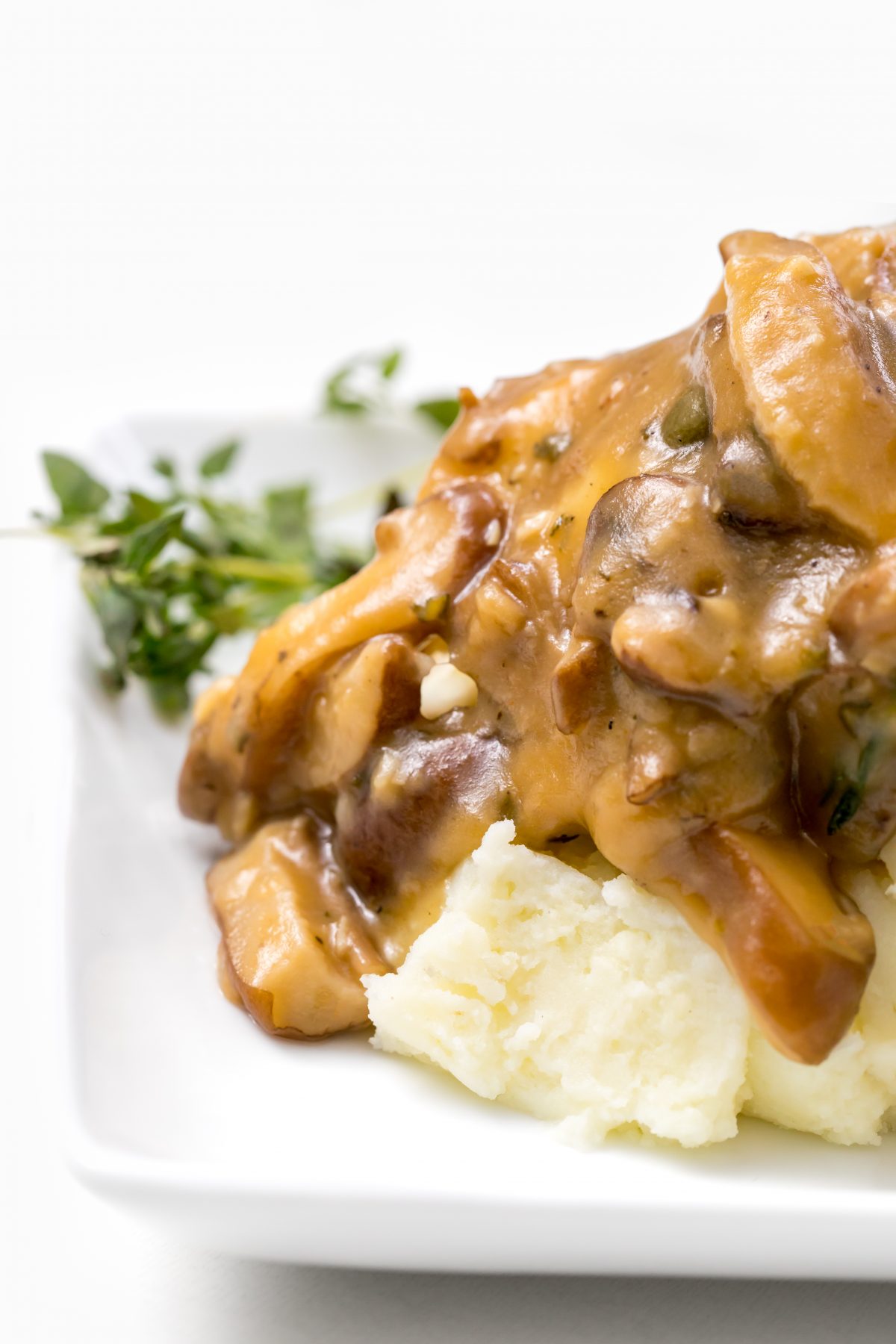 Brilliantly simple gravy for any occasion, on your table in minutes! 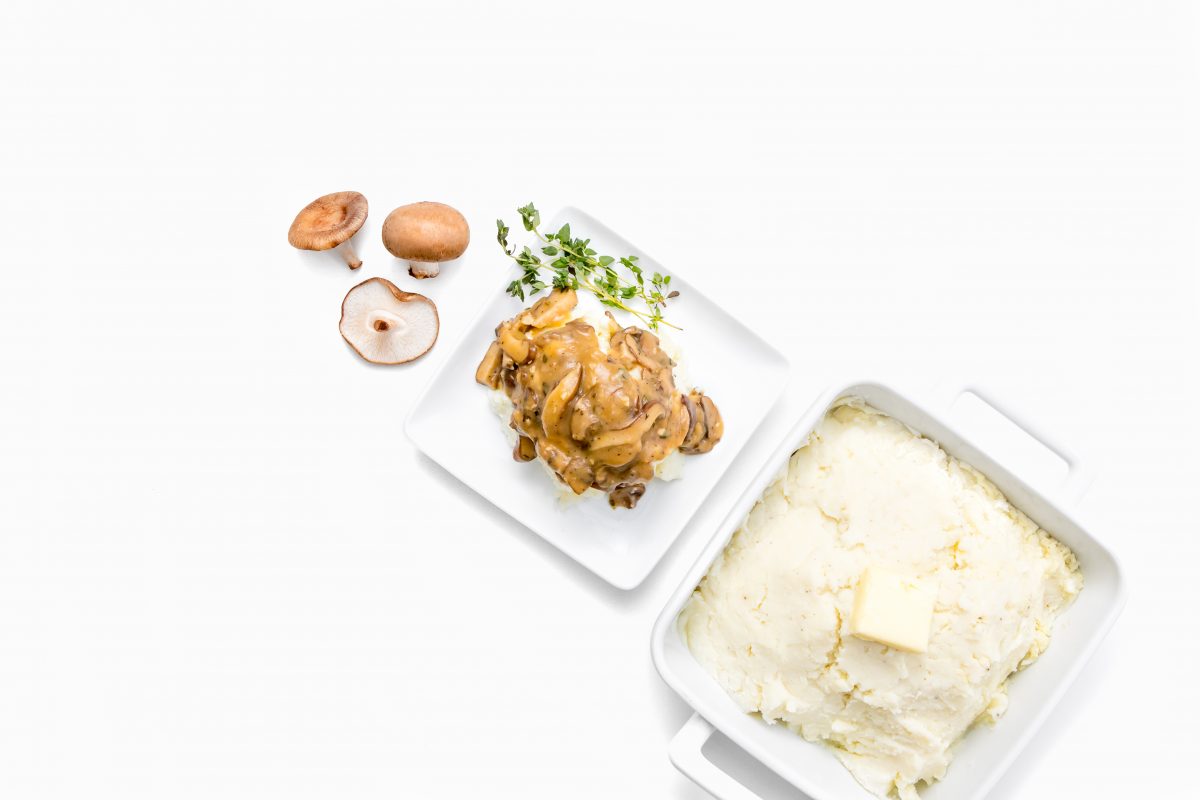 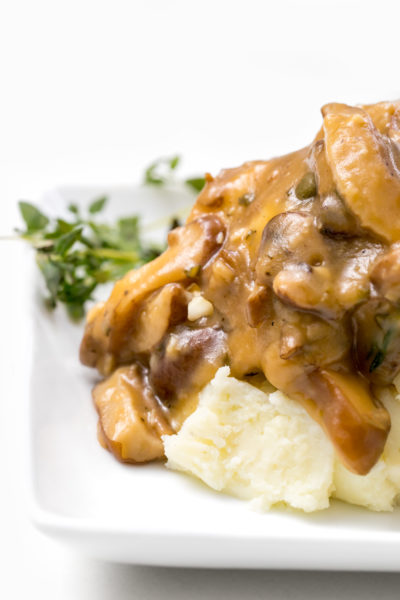 MORE: This citrus-infused lemon and rosemary turkey gravy will be the star of your holiday table