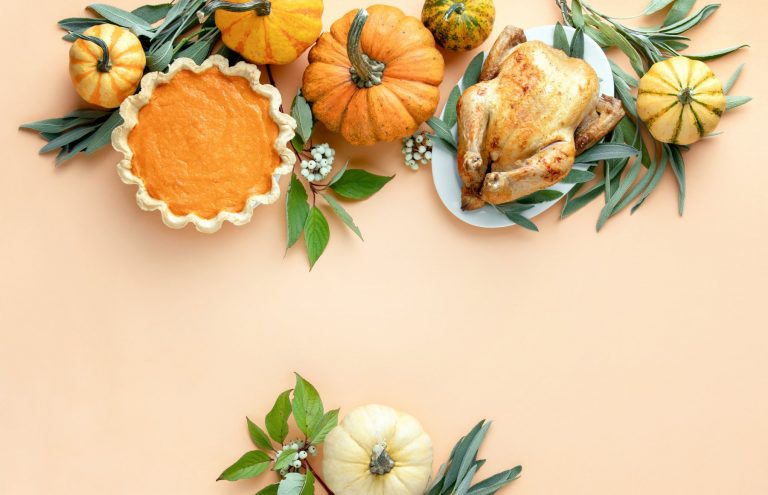 Juicy turkey, buttery mashed potatoes, mouthwatering gravy, decadent pecan pie. No one has ever said eating healthy at the holidays is easy. And, it’s perfectly acceptable to indulge in your favorites. Luckily, with a little forethought and planning, it is possible to still enjoy Thanksgiving dinner while focusing a bit more on healthy choices and avoiding spending the rest of the evening on the couch in a food coma with Uncle Frank.

Let’s take a look at holiday food: what to choose, what to avoid, and how to shop smart for your Thanksgiving meal. Plus, scroll to the end of this article for our quick cheat sheet.

Even with the increasing popularity of Thanksgiving dinners featuring something other than turkey, it still remains the quintessential centerpiece of most holiday meals, which is great news, because lean turkey is an excellent source of protein, zinc, iron and potassium. The trick is in what to look for when buying a turkey and in its preparation.

According to the Committee of Animal Health, many of the turkeys available for purchase in grocery stores are raised in confinement while dining on antibiotics and corn (some GMO), and being injected with saline solutions to keep them moist and so-called “natural” flavorings to enhance their flavor. A turkey’s diet should, in fact, consist of grasses, insects and fresh air.

You can avoid the added ingredients of mass-marketed turkeys by looking for labels that say “organic” and “raised without antibiotics.” Don’t be tricked by the “all natural” or “free range,” as it has nothing to do with how the turkeys are raised.

Once you’ve chosen the perfect turkey, now it’s time to consider how it is prepared. Many recipes call for ingredients that include large amounts of sodium and added calories. Stick with olive oil, lots of fresh herbs, and a little salt and pepper to season the outside, while stuffing the inside with the wonderful taste and scent of lemons, apples and onions, and herbs such as garlic, sage and rosemary.

Lose the cans and opt for fresh

While canned fruits and veggies may seem like a worthwhile convenience, they may not be the wisest choice when it comes to eating healthy holiday food. Many are packed with lots of added sodium. And while many are now BPA (bisphenol A) free, its replacements — bisphenol S (BPS) and bisphenol F (BPF) — are believed to be associated with childhood obesity. So, when possible, it is best to avoid canned fruits and veggies and stick with fresh or frozen.

To me, there’s nothing better than using fresh fruits and veggies. It only adds a few minutes to your preparation time, but it is well worth the extra effort. If you want to make it easier on yourself, organic frozen fruits and veggies are healthy choices, too.

I have always found it disconcerting to see the gelatinous blob of cranberry sauce — molded into the shape of the can from which it is plopped — laying unchanged on a serving plate. So very retro and not healthy.

I’ll admit, I’ve made — and consumed — my share of green bean casserole over the years. Canned green beans, canned cream of mushroom, canned onion straws — I would have had enough cans from one meal to decorate the car of some local newlyweds.

That was until I realized the pure taste bud joy of fresh green beans in all their natural glory. They are, by far, one of my favorite veggies to enjoy. So, rather than disguise the actual green bean taste in sodium-laden additions, let those green beans be the star of their own show in a recipe such as these roasted lemon Parmesan green beans. 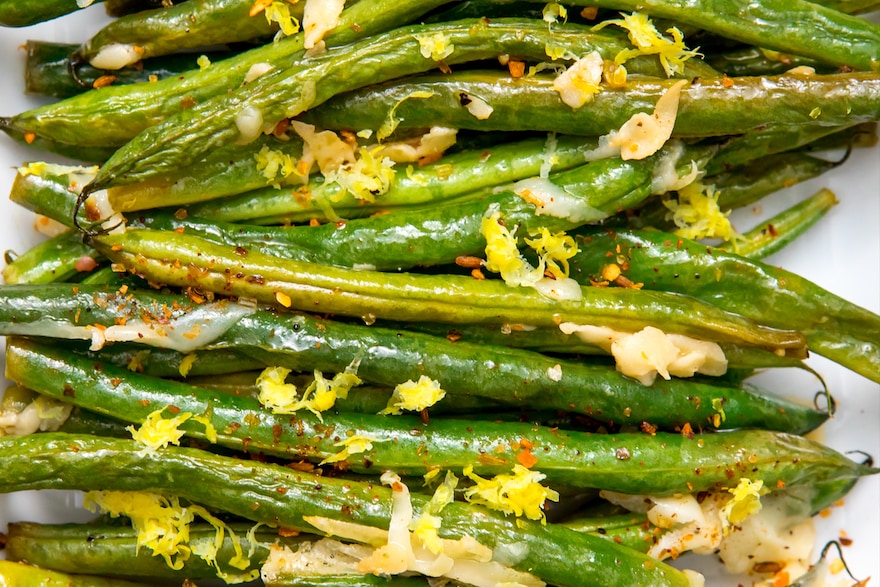 For more Thanksgivings than I would like to remember, I brought the casserole dish of achingly sweet, marshmallow-covered canned sweet potatoes — more of a dessert than a vegetable dish. My dad never would have forgiven me if I hadn’t.

As my taste buds and healthy eating habits evolved, I grew to love the taste of sweet potatoes that weren’t disguised as baked sugar bombs, and I began trying lots of baked and roasted recipes, and found I adored them, as did my dinner guests.

One 4-ounce serving of candied sweet potatoes adds as much as 187 calories to your plate. Sweet potatoes themselves are a powerhouse of vitamins, nutrients and fiber. So why negate all the health benefits by overloading them with sugar? Instead, opt for healthier, tastier sweet potato dishes, such as simple roasted sweet potatoes.

These versatile spuds can be a healthy choice, as they contain vitamins A and B, and minerals including potassium, magnesium and iron. They are also a good source of dietary fiber. Even boxed mashed potatoes can be a good choice as long as you look for quality ones that don’t have lots of added unhealthy ingredients.

A top choice for instant mashed potatoes that will taste as close to fresh as you can get is Bob’s Red Mill Potato Flakes. As the name indicates, the ingredients are only potato flakes and nothing more. No artificial ingredients or preservatives.

The biggest problem is in how they are made. When cooked with loads of milk, butter or margarine and cream, the health benefits get lost in the fat and calories. There are several options when it comes to making healthier mashed potatoes. Try using low-fat milk in place of whole milk, replacing some of the milk and butter with low-sodium chicken broth, or using soy or coconut milk.

Look, boxed stuffing is a huge time-saver. However, you’re sacrificing taste and nutrition, as most boxed stuffings are, well, stuffed with added sodium, corn syrup and other not-so-delicious ingredients.

One easy fix is to swap the white bread in stuffing for whole grain cornmeal or whole grain bread. Both are full of fiber and other nutrients. Also, as broth tends to add a lot of sodium to the mix, always choose low-sodium broths for your recipes. Adding more veggies to your stuffing will lessen the actual amount of bread and up your veggie intake without losing the flavor. 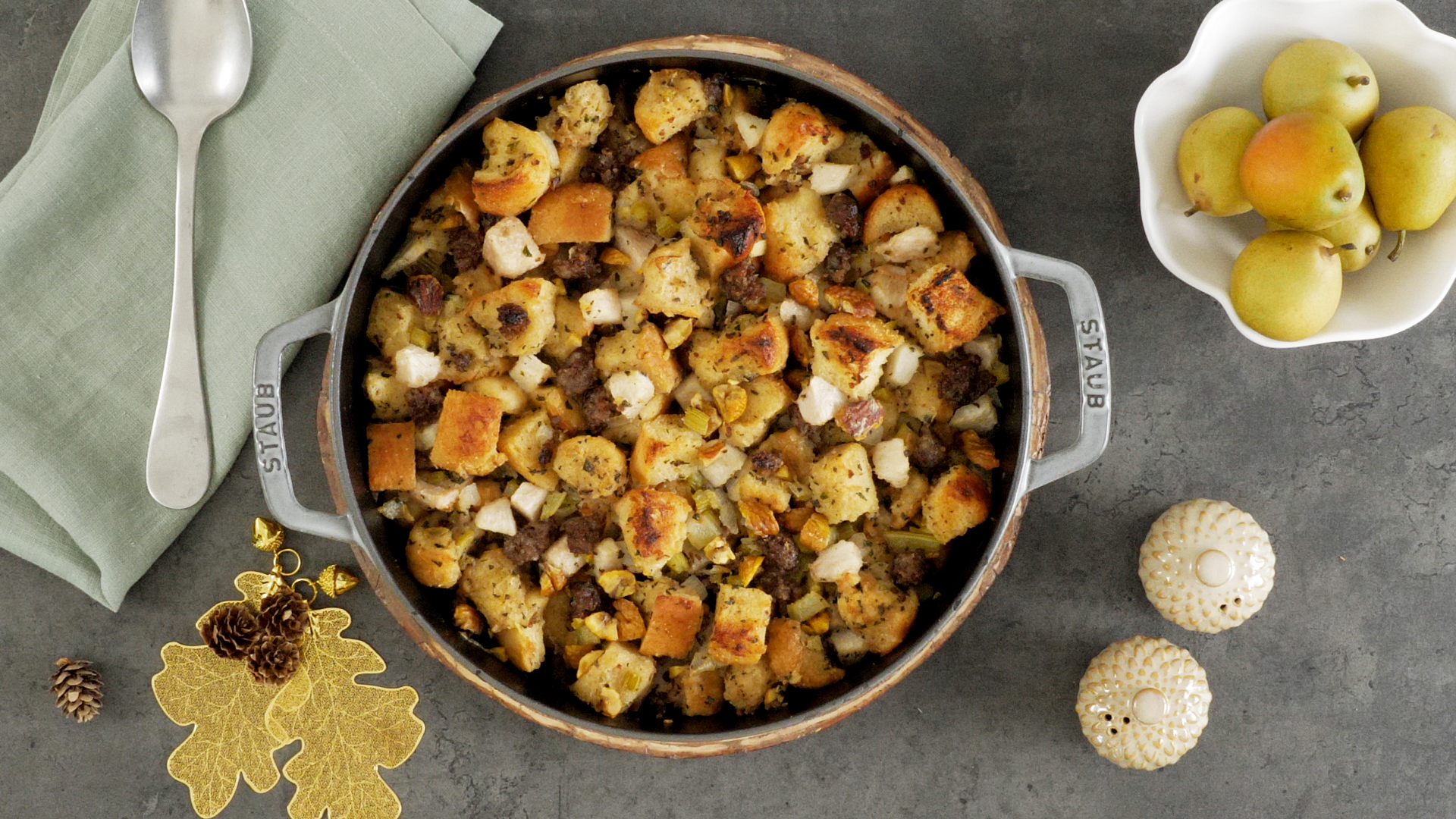 Thanksgiving sans gravy? Say it ain’t so! What is holiday food if it isn’t smothered in gravy? The good news is you don’t have to forgo the gravy. When used in moderation, gravy doesn’t add tons of calories. The problem? Store-bought gravy, like so many other foods, often has unhealthy amounts of added sodium as well as artificial ingredients and preservatives.

However, it is tempting, when you’ve already spent countless hours slaving over the turkey, stuffing and homemade mashed potatoes, to throw in the towel, heat some store-bought gravy and call it a day.

If that’s what you have to do, then make sure to choose a gravy such as Swanson’s Turkey Gravy, Imagine Organic Roasted Turkey Gravy or Pacific Organic Turkey Gravy. Low in sodium and free of any other icky ingredients, you can feel good about about saving some time in the kitchen with these choices.

If you cannot imagine a Thanksgiving meal without a taste of pumpkin or apple pie, then here are some less-indulgent, yet still-mouthwatering, desserts to finish your evening off just right.

Let’s pretend for a minute that your slice of apple pie is a normal serving size (one eighth of a 9-inch diameter pie), then you’re consuming approximately 277-296 calories. For a lighter, yet still scrumptious, apple dessert, consider these hot apple crumble bars from Chocolate Covered Katie, with only 85 calories per bar and all natural ingredients.

A slice of pumpkin pie (again, not a heavy-handed slice) comes in at approximately 323 calories and contains 25 grams of sugar. Top that off with four tablespoons of whipped cream, and you’re looking at an additional 60 calories.

Learn how to make bean to bar chocolate from a Master Chocolatier in the video below!