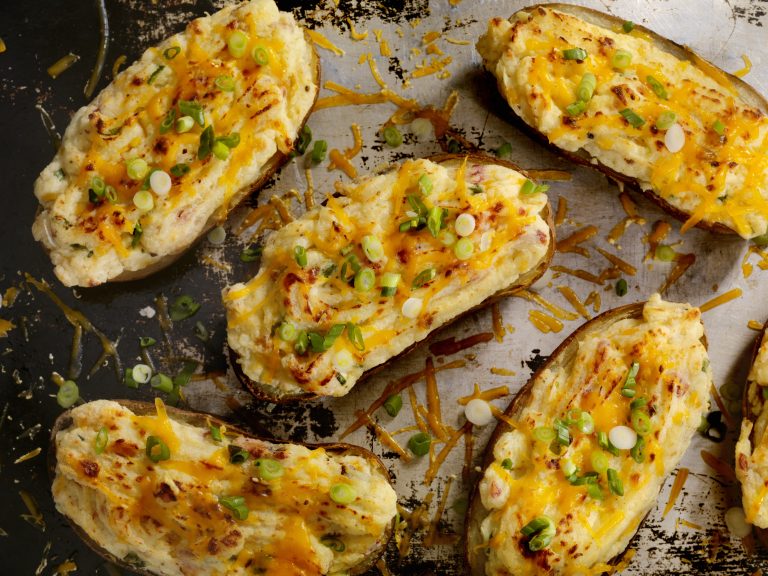 Holidays were always special in our house. There were seven of us growing up together under one roof (six girls and one boy). Ugh, my poor parents. My father would say that he was the richest man in the world because he had so much love. But with seven kids, I’m sure he would have enjoyed some CBD oil or CBD-infused recipes from time to time.

On his mason’s wages with seven kids you can imagine we didn’t go out for dinner often, except for that one week every summer when we went down to the Jersey Shore. For that week, we were on vacation. We went out for doughnuts in the morning and to the boardwalk to eat at night. We all ate pizza, of course, but my father loved his fried clams and steak, and his all-time favorite were twice-baked potatoes. The potatoes were huge, overstuffed and dripping with cheese. That was happiness for him.

I make them at my home now for my family, and especially for a holiday like Father’s Day, I plan on making  T-bone steaks, some grilled veggies and CBD twice-baked potatoes in honor of my dad. I also make some plain ones for the kiddos —  I put the potatoes onto a sheet pan with parchment paper and write on it which potatoes have the CBD to make it easy to keep track if I am waiting to serve them until later.

To make this CBD recipe, preheat your oven to 375 degrees Fahrenheit. Wash and dry your potatoes well. Using a fork, poke them several times and then rub them with light olive oil, salt and fresh cracked pepper. Pop them in the oven for about an hour, and then allow them to cool 20-30 minutes. It makes handling the potatoes much easier.

Keep the oven on, increasing it to 400 degrees Fahrenheit.

When the potatoes have cooled, cut them in half and spoon the insides into a medium bowl. I recommend leaving a thin layer of potato inside the skin so that it’s supported and keeps it’s natural shape. Rub the now-hollow skins with more olive oil. I also like to cover the tops and bottoms of each potato skin with Parmesan. Set them aside.

Returning to the medium bowl, smash the potato insides with a fork until all the big lumps are gone. Add any and all of your preferred toppings. I typically use cheddar cheese, garlic powder, butter, half and half. sour cream, chopped bacon, chives, and salt and pepper to taste. Now it’s time for the CBD oil. To make 8 twice-baked potatoes, drop about 80 milligrams of unflavored CBD oil into the mixture. This will yield roughly 10 milligrams for each potato. If you’re making less or more than 8, just multiply the number of potatoes by 10 — that’s how many milligrams of CBD oil to add. Math, folks. It’s all a part of the process.

Spoon the mixture back into the potato skins, filling them twice as high as the sides of the skins (it’s what’s inside that counts). Sprinkle the potatoes with any extra toppings that sound good to you. Place them back in the oven (now 400 degrees Fahrenheit) for another 20-30 minutes, pulling them out when the potato insides and toppings are melted and just starting to brown.

Garnish with chives or green onions and serve! Keep in mind that you can customize your CBD twice baked potatoes however you or your honorary guests would like Consider adding leftover pulled pork, chopped chicken or broccoli for a full meal.

Other CBD recipes to try: 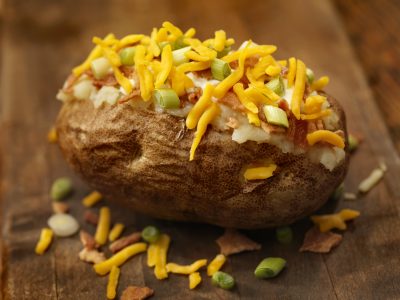 You can make these with leftover baked potatoes if you have them and even add some funky stuff like leftover pulled pork, chopped chicken or broccoli for a full meal.

I like to put the potatoes onto a sheet pan with parchment paper and write on it which potatoes have the CBD to make it easy to keep track if I am waiting to serve them until later.

Planning on making this or any of our CBD recipes? We’d love to see how it turns out! Tag us on Instagram @makeitgrateful and #makeitgrateful!

The information presented on our site is in not intended as medical advice or as a substitute for medical treatment. You should always consult with your physician or other health care professional before taking any medication or nutritional, herbal or homeopathic supplement, or adopting any treatment for a health problem, whether offered on our site or otherwise.