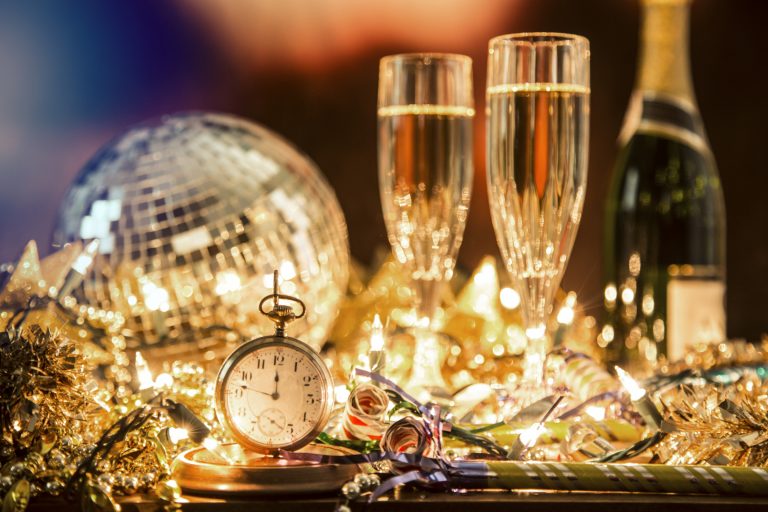 Whether you smooch your longtime sweetie or the new friend standing next to you, kissing at midnight has its roots dating back to ancient European times as a way to ward off evil spirits. Kissing was believed to offer blessings and bring people good luck as they entered a new year.

MORE: The history of New Year’s Day is as rich as the food you will eat while you celebrate

Overindulgence on New Year’s Eve in general is quite common and expected. But, how and why did champagne become the bubbly drink of choice at midnight? It can be traced back to the use of wine in the Christian tradition of Eucharist — taking the blood of Christ. As wine from the Champagne region of France began to be used in baptisms, the use of wine became more frequent at religious events and ceremonies. This bubbly wine soon became popular at parties and was marketed to middle-class families as the way to celebrate.

The song “Auld Lang Syne” was first a poem by the 18th century Scottish poet Robert Burns. The song means “old long ago” but is also nostalgic because it talks about the love and kindness of days past. It did not become an American tradition until at least 1929, but it seems fitting when saying goodbye to an old year and hello to a new one.

The dropping of the ball at midnight in Times Square is a somewhat odd tradition when you really think about it. But it’s become completely accepted and highly anticipated each year. Prior to the ball drop, the New Year’s celebration in Times Square ended with a fireworks show. Fireworks were banned at one point, and the hunt began for an equally sparkly alternative. Thus was the beginning of the 700-pound orb that millions watch each year beginning at 11:59 p.m., both in person and on the television.

MORE: Skip a New Year’s resolution and make a “thankful list” instead

The first people to make New Year’s resolutions are believed to have been the Babylonians some 4,000 years ago. They were made as promises made to the gods in hopes of having a good year. The Romans followed suit by offering sacrifices and making promises of good conduct to their deity Janus. For Christians, this first day of a new year became a time to reflect on past mistakes and resolve to do better. Today, the religious aspect of resolutions has all but disappeared and most are focused on self-improvement in general.

New Year’s is filled with a multitude of loud noises and fireworks are often the final explosive ending to the celebrations. This tradition is believed to have begun in an effort to ward off evil spirits and misfortune. In the west, however, the use of fireworks on New Year’s seems to have evolved separate from any religious beliefs.

In other countries, several traditions have evolved in the hopes they will bring money and fortune in the coming year. In some Latin American countries it is believed the color of your undergarments will bring prosperity and success. Red brings love, white brings harmony, and green brings health. In Spain, eating 12 grapes, beginning at the stroke of midnight and then one for each stroke thereafter, brings good luck. And, in the Philippines, circles represent prosperity, so it’s common to see people wearing polka dots and carrying loose coins in their pockets; the “jangle” is believed to attract wealth.

While New Year’s Eve traditions center around parties and celebrations, New Year’s Day traditions tend to focus on what food to eat (and maybe sleeping off from having “too much fun” the night before). Several foods appear regularly on many New Year’s Day menus because they’re considered good luck.

Black-eyed peas are perhaps the most common and well-known of good luck foods. They are actually a bean, not a pea, and there are different theories as to why they are good luck. One theory is that it was the only thing left behind when Union soldiers raided a Confederate Army food supply. Another is that newly freed slaves celebrated their independence with this food staple — one of the only ones allowed to them.

Pork has become a good luck food in large part based on how pigs behave. Many animals, such as chickens, scratch backward while pigs bury their snouts in the ground and move forward when eating — and forward is the way you want to head in the New Year. It also helps that pigs are traditionally slaughtered in the fall, which makes it an easy choice for saving and serving on New Year’s. The tradition of eating pork and cabbage on New Year’s Day was apparently brought to America from Germany and Eastern Europe.

MORE: This extremely easy brown sugar bourbon slow-cooker spiral ham will save you time and delight all your dinner guests

For the cabbage tradition on New Year’s Day, part of it is just a timing thing. Harvested in late fall and left to ferment for six to eight weeks means it’s ready just in time for the new year. However, the leafy plant is also believed to bring forth a long life and wealth.

Different cultures have specific special cakes they serve on New Year’s Day. One commonality among many of them is that they are baked with a special coin or other trinket inside, and the lucky person who gets the piece with it is supposed to have good luck throughout the coming year.

The color green symbolizes money and prosperity, which is largely why greens can usually be spotted on the meal table on New Year’s Day. Southern tradition also teaches that they can be hung by the door to scare away evil spirits. So, eat them or hang them by your door — your choice.