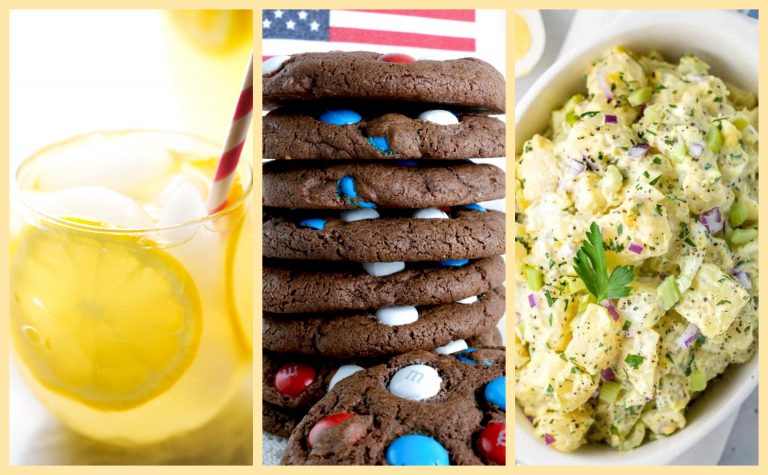 The summer holidays — Memorial Day, the Fourth of July, Labor Day — call for backyard barbecues, patio parties and picnics. Here, we offer some summertime picnic recipes that’ll bring everybody to your table.

Barbecue tastes vary by region. Some areas are known for their sauce or dry rub, others for the cut of meat, the cooking method and more. Whatever the variation, barbecued meats are always good ideas for backyard gatherings. How about switching up your usual recipe this year with bbq ribs from Rasa Malaysia?

Here, we have a unique take on traditional barbecue. Combining Asian flavors with traditional American, these baby-back ribs will get the party started. Rasa Malaysia starts with her signature char sui sauce, made with maltose or beer, honey, hoisin sauce, soy sauce, Chinese rose wine, white pepper, five-spice powder and sesame oil. The ribs are rubbed with garlic cloves and then marinated in two-thirds of the sauce for about 8 hours; you really want all that tough connective tissue to soften up for easy eating. Rasa cooks her ribs for two hours in the oven first because it allows precise temperature control. Cooking in the oven makes controlling the temperature easier.  Then they go over to a warmed-up grill, for a bath in the remaining sauce and the five to 10 minutes over heat that caramelizes it.

The result: crispy ribs with a sweet, spicy Korean barbecue flavor. Yeah, you probably should make a double batch.

Pork ribs come in two different styles: Country and baby back. Country ribs are ideally cooked in a slow cooker or pressure cooker because they need a lot of cooking time. They’re meaty and don’t include any actual rib bones. Country ribs are significantly less expensive than baby backs.

This recipe calls for baby-back ribs, but country ribs can work in a pinch. In fact, this marinade would make a terrific slow-cooker sauce. Just skip the grill if the meat is falling off the bone after cooking.

Beef ribs are bigger than pork ribs, so if you use beef, adjust your cooking time accordingly. They typically take a bit longer because of the larger bone. Although beef will yield a slightly different flavor, it’ll work here.

What’s a picnic without potato salad? This picnic and barbecue staple is believed to have originated in Germany, where it consisted of potatoes served warm in an olive-oil dressing. Immigration brought the potato salad stateside, where it gained a mayonnaise-sauced version. Nowadays, most potato salads are a combination of boiled potatoes with mayonnaise, mustard, and other seasonings.

Instead of buying yet another store-made, heavily mayo-ed three-pound tub of potato salad that no one will finish, how about making your own? Try this recipe from Jessica Gavin, which adds relish, red onion, celery and hard-boiled eggs to the mix for an easy, delicious side dish.

The type of potato also matters. There are more than 200 varieties of potatoes sold in the U.S., in a host of colors, shapes, sizes, flavors, textures, skins etc. Jessica recommends the Idaho potato because the inside becomes soft and creamy upon cooking. Red or yellow potatoes are good options, too.

Potato salad is as versatile as the potato itself. Add some bacon, try an olive-oil base … get creative, and chances are good that your dish will shine.

Now, it’s time to think dessert. American summer holidays are tributes to our military, their sacrifices and our independence, so a treat that shows patriotism is ideal. These red white and blue chocolate cookies with their red, white and blue M&Ms remind us why we’re celebrating.

These are based on a basic chocolate cookie recipe of butter, flour, salt, sugar, eggs, oil, cocoa and a dash of vanilla. The M&Ms sub in for the usual chocolate chips and play nicely off the deep brown of these chewy cookies.

Mars sells the red, white and blue M&Ms from May until July every year, so grab an extra bag or two to keep on hand all summer. If you can’t find them, just sort out the red and blue M&Ms from regular bags, and pick up some white ones at party supply stores.

A nice, cold glass of homemade lemonade is the quintessential neighborly refreshment for summer afternoons. Back in the day, it was common on the docks of New York City, where it quenched the thirst of visitors and dockworkers. Sellers, often children, set up wooden carts and hawked their concoctions, giving rise to the sweet summertime tradition of the lemonade stand.

Lemonade is actually quite easy to make, and this recipe for the best-ever homemade lemonade is no exception. Consisting only of freshly squeezed lemon juice, sugar and ice-cold water, it’s a simple, wholesome alternative to chemical-laced store-bought mixes.

Lemons vary in acidity, so be sure to taste as you go. Ultimately, the perfect ratio of sweet to sour comes down to personal preference. You also can mix it up with delicious additions, such as:

Let’s not forget the Arnold Palmer: Half tea, half lemonade. And for something really different, add sparkling water; it cuts the sweetness and is especially refreshing.

Want more? Check these out: