How to have a ‘Stranger Things’ 4th of July viewing party 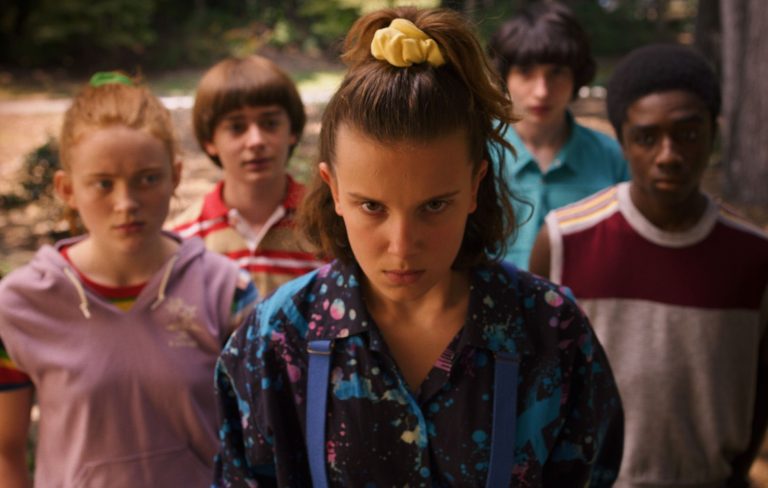 Is it just us, or does it feel like forever since Season 2 of Stranger Things dropped on Netflix? We’re starting to think it might actually have been the ‘80s when we watched it. Thankfully, the third season will soon be released, and that alone is reason to celebrate. But even better? The new episodes will arrive on Independence Day. So, if you aren’t planning a bitchin’ Stranger Things 4th of July viewing party, you might be a mouth-breather.

But, like, don’t be a mouth-breather, OK? No one wants that. Sure, the idea of throwing a party that ties in both Stranger Things and one of our great nation’s most highly anticipated holidays can seem daunting. Really, though, if Will can fight his way back from The Upside Down, if Eleven can move vehicles with her mind, if Steve can maintain his perfectly buoyant coif even while swinging a baseball bat at demogorgons, you can pull off this double-duty shindig.

Besides, we’re here to help. Alas, we don’t have any supernatural powers. What we do have is plenty of ideas. So, just think of this as your curiosity voyage — we’ll be your paddles to travel. When your rowing is done, you’ll be ready to throw a Stranger Things Fourth of July viewing party that is, ahem, an eleven out of 10.

Getting the word out

If you feel like you still have enough time to get out print invites, you’ll find a ton of cute Stranger Things-inspired invitations on Etsy (we’re partial to this version from Hue and Dot featuring Joyce’s iconic living room Christmas lights).

But if you want your invite to reflect the fact that the new season drops on the Fourth of July, we recommend hacking a patriotic invite. MaMilnspired’s Fourth of July party invite is fully editable and features fireworks bursting against a black background. You could easily download the Strangers Thing font — or one inspired by it — and use it to write your main message in bright red against the inky background, e.g. “Strange Things are happening this July 4th.”

Or if you just can’t get enough of waffles, like Eleven, this invite from Party Printables Plus features that glorious breakfast food. It’s also fully editable (not to be confused with edible).

Your other option, of course, is whipping up an e-vite or creating an event page on Facebook to give your friends the heads up that way.

Let’s be real: People come to viewing parties for the free grub just as much as they do to watch the show you’re streaming. Fortunately, menu ideas for a Stranger Things Fourth of July viewing party are super-fun and pretty much only limited by your imagination and/or culinary skills. For Season 3, there are a couple of really cool ways to play this.

You could focus on food that is clever nod toward the show and July 4th. For example, an easy appetizer might be Snackworks’ strawberry stars. Not only are they patriotic, but the splayed strawberries 100 percent look like Demogorgon heads.

For heartier fare, what’s more American than hotdogs and hamburgers? Give it a Stranger Things spin by serving up “Eleven’s Eggos” sliders and “Demogorgon-zola” dogs. If your crowd has a killer sweet tooth like Dustin’s, offer them “The Upside Down” pineapple cupcakes. You could also set up a red, white and blue waffle bar.

Maybe you don’t want to be quite so literal, though. In that case, take your cue from the Season 3 teaser trailer, which showcases a locale rife with food inspo: a state fair.

To go that route, scour the internet for a few fair-slash-Americana (perfect for the Fourth, too) recipes — think funnel apple fries and homemade corn dogs.

Bringing in the background noise

All friends are welcome at this party, so make sure they know that by decorating your door with a “welcome to Hawkins” wreath. You can even add patriotic swag for the Fourth.

Inside, you can keep the decor Stranger Things straightforward by hanging Christmas lights on the wall with a scrawled alphabet banner underneath. Or you could paint the alphabet on red, white and blue balloons floating around the room. In that case, you could use your wall space for a DIY mural of the Shadow Monster from the Upside Down.

If you’re feeling extra cheeky (pun intended), frame your bathroom door with rustic sticks and branches, and hang an American flag and hand-painted “Castle Byers” sign above the door — after all, there is a throne in there.

MORE: The keto cucumber mule is the official cocktail of summer

In the days leading up to your party, hit up the local thrift store for vintage ambiance. This could be anything from a corded phone to tacky lamps, but bonus points if you find things that are ‘80s-esque and patriotic.

Other decor ideas? Create a “Starcourt Food Court” sign to hang above your snacks, or make a Hawk Movie Theater marquee to put above your TV or projection screen.

Depending on how many episodes you plan to get through, you might want to invite everyone over early enough for some fun and games before you cue up begin the Fourth of July viewing party. If you really want to make Will and the gang proud, round up as many vintage handheld gaming consoles as you can find — Game Boy, the OG Nintendo DS — anything clunky and video-game-y. Drop ‘em all on an open tabletop with a sign that says “The Palace Arcade.”

The sky’s the limit here. You could have a “Where’s Barb?” scavenger hunt. You could break out your dusty ol’ Dungeons & Dragons. You could play a round of “Never Have I Ever,” but call it “Friends Don’t Lie” instead. Since it’ll be the Fourth of July, though, and Season 3 does involve a trip to the fair, carnival-type games like American flag ring toss are a no-brainer.

Watching Season 3 (and maybe fireworks, too)

Before you start watching, it’s probably a good idea to gauge how long everyone plans to stick around. Take short breaks in between episodes so that guests can head to “Castle Byers,” if they need to, or even make a subtle exit.

But most importantly, know in advance how you’re going to handle the Fourth of July aspect of your festivities. Because the series falls on this holiday, your guests might want to see fireworks on more than just the TV screen. If you live in an area where it’s legal to shoot fireworks, time your screening so that you stop early enough for everyone to see the pyrotechnics before they leave.

Now, go forth and get started with your Stranger Things Fourth of July party. It might take longer than a campaign to plan, and it’s unlikely your boss will front you a phone, two weeks’ advance, or a pack of Camels to help you get the job done.