8 latke recipes you will love 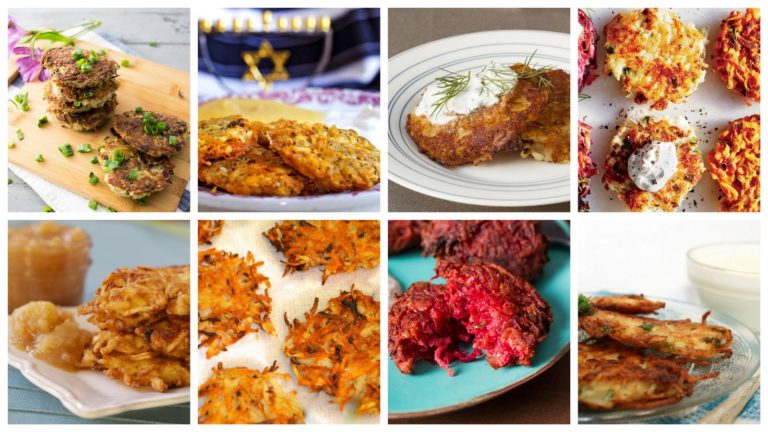 With the arrival of the Hanukkah holiday, the tables will be spread with all the usual foods like challah, brisket and, of course, latkes. These savory potato pancakes are a delicious staple at any Hanukkah table. Whether you’ve had them before or are just discovering these wonders, we have gathered eight different latke recipes for you to try!

The tradition of latkes just got easier and tastier

The deep-fried tradition of Hanukkah is said to represent the “miracle of the Menorah,” when, in the early second century, a Jewish group called the Maccabees was said to keep the temple lamp lit for eight days when they only had enough oil for one night, while the Greek army laid siege to the temple. Therefore, to represent and remember the supernatural abundance of oil, the traditional Hanukkah feasts feature oil-cooked foods.

The latke may be the most long-established of Hanukkah offerings, but that doesn’t mean you can’t serve several different variations of latkes. Your latkes don’t have to be bland, but instead can be a delicious part of your feast! The following recipes are sure to bring a new twist to the conventional.

Latkes are typically made with potatoes, egg, a bit of flour, and seasonings. The potatoes are usually hand-grated, making this an exhausting endeavor, as pounds and pounds of potatoes are processed. Two Lazy Gourmets have brought a most ingenious shortcut to the whole productions: frozen hash browns.

Does the thought of slaving over a hot stove right before the Hanukkah meal panic you? They highly recommend making the latkes ahead of time, freezing and reheating when it’s time to serve.

Latkes are delightfully crunchy pancakes usually served with sour cream or applesauce. The Spruce features one of the best latke recipes. In their version, the potatoes are soaked in water until ready to cook, and then drained. They also recommend using the standard blade on a food processor, which yields a more uniform potato slice.

The only thing better than fried potatoes are cheesy fried potatoes. The next recipe from Cooking Light combines potatoes with cauliflower and cheese to make a delectable and addicting dish. After soaking and draining the potatoes, combine them with riced cauliflower. Add the remaining ingredients, fry up and you’ll have a new favorite latke recipe.

Sometimes potatoes need more than just salt. Thankfully, this plain ol’ tuber can be mixed with just about every seasoning under the sun. Over at Divas Can Cook the latke is dressed up using red potatoes, garlic, seasoning salt and green onions.

Without latkes, the Hanukkah meal is incomplete. This succulent and crispy latke will be the pièce de résistance for your Hanukkah feast. The Stranded Foodie recommends grating the potatoes, then letting them rest to release their liquid. Finish prepping the potatoes by wringing them with some paper towels, which helps to release the liquid and dry them off.

The cooks at The Splendid Table use a combination of baking potatoes and Yukon gold potatoes for latkes. Even though you may want to skimp on the oil to make it healthier, it’s important to use plenty of oil while frying your latkes. The more oil, the better the latke.

Savory Tooth has a sublime take on the potato pancake. The combination of potato, rosemary and green onions is a delicious variation for your Hanukkah meal. The addition of rosemary gives an earthy and delectable flavor to the otherwise normal latke.

Horseradish is another mainstay for traditional Jewish feasts and is just the condiment to serve alongside the beet latke from Serious Eats. The beets are squeezed with the potatoes and onions in cheesecloth to remove any excess liquid. Once thoroughly drained, the mixture is combined with seasonings and fried. The pink color of the beets adds a festive color for your special meal.

The Hanukkah meal is a special time to gather with family and friends and remember the blessings of the year.