13 fangtastic Halloween appetizers that are perfect for a party 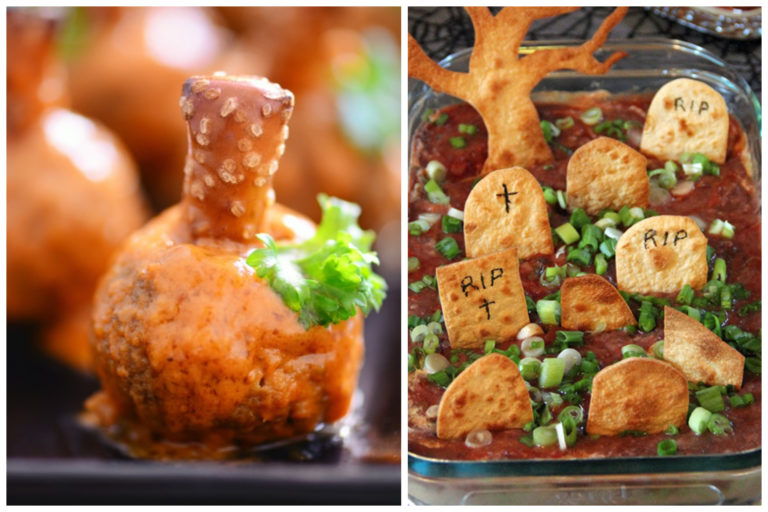 Boo! It’s time for your Halloween party! You have the costume; now it’s time to plan the food. Whether it’s a kid’s costume party or your adult friends are enjoying the spirit of the season, you’ll need some tasty treats for your tricksters. We’ve found 13 fangtastic Halloween appetizers that are out-of-this world.

The undead will come to life with this graveyard taco dip from Chickabug. The mummies will come running for this dip inspired by a simple 7-layer taco dip — but simplified.

The first layer is the bean layer, and you can use refried beans or black beans. Refried beans are already nice and smooth, but black beans are a great option. If you use black beans, blend them up or mash them with a ricer. Spread them out to form the base layer.

The fourth layer is your favorite salsa, and the fifth layer is chopped green onions. Before finishing the dip, chill for at least an hour. You can even prepare the first five layers the day before serving.

The grave markings are shapes cut into tortillas, and then baked at 350F for a few minutes until browned. Use a food safe marker to decorate the crisp tortillas with different graveside sayings.

Feel free to add whatever you want to your layer dip mix. Black olives make a good addition, or perhaps include some shredded cheese. Layer dip is a customizable appetizer: you can’t ruin it!

Kick off spooky Halloween festivities with this graveyard taco dip at your party this year.

Way back in the spring, farmers began to sow their crops into the ground. They planted, watered, thinned, and weeded. They tended their crops all summer long, hoping for a plentiful harvest with which to provide for their family. The fall harvest festivals celebrate that eagerly awaited bounty reaped from the earth.

While the harvest is separate from Halloween, it does usually happen in October, so harvest festivals are often lumped in with Halloween celebrations. We love a good harvest festival just as much as we love Halloween! We love the hay rides, the bobbing for apples, the corn mazes, the funnel cakes — all of it. We can’t get enough!

If you’re attending a harvest festival, or just looking for a sweet treat to have around the house during the month of October, give this Halloween harvest hash Chex mix from One Little Project a try. It’s a sweet version of the traditional savory Chex Mix. This recipe uses Chex mix, Bugles and pretzels as its starch base, then melted butter, brown sugar and vanilla is drizzled over the mixture. Give a gentle toss and bake at 275F for 45 minutes, stirring every 15 minutes.

Once the mixture is cool (we won’t tell if you taste-test the warm goods, though), transfer to a bowl. Add in your harvest and Halloween themed candies and treats. In this mixture, Debbie from One Little Project added candy corn, candy pumpkins and Reese’s Pieces. You can add or omit candies according to your preference. Can you believe some people don’t like candy corn?

It’s fun to see what part of this Chex mix will be eaten first. We think the Bugles will be the first to go. One thing is true: this bounty will be devoured.

Jumping jack-o’-lanterns, these buffalo meatball pumpkins are divine. Tender buffalo flavored meatballs are given a Halloween flair by sticking a pretzel rod into the top.

Eastern England and Ireland has a strange phenomenon of light flickering above the peat bogs called will-o’-the-wisps, or jack-o-lanterns. The term evolved to mean a strange light emanating from where it normally doesn’t. The tradition of making jack-o’-lanterns — hollowed out pumpkins or gourds with a candle placed inside –originated in Ireland sometime in the 19th century. They were initially intended to scare away unfriendly spirits, but soon evolved into a decorative pastime. In America, a jack-o’-lantern was famously discovered next to Ichabod Crane’s abandoned hat after an encounter with the Headless Horseman in Washington Irving’s story, “The Legend of Sleepy Hollow.”

Americans love to carve pumpkins at Halloween. The familial tradition of picking out the pumpkin and then carving it is a part of Halloween that nearly everyone enjoys, and jack o’lantern carving parties are a great way to spread the fun. If you’re having a carving party this year, make up a bunch of these meatballs that look rather like little pumpkins. These meatballs are perfect for serving at Halloween parties, backyard gatherings or football tail-gating parties.

As Halloween draws near, the days get cooler and the nights are crisp. You just want to sit by the fire pit, sip hot apple cider and nibble warm snacks. Serve this meatball recipe at your next Halloween function, it will frightfully disappear into your guests’ stomachs.

The meatballs are eerily easy to make. They start with pre-made frozen meatballs cooked in a slow-cooker. Then the meatballs are covered with a buffalo pumpkin puree and rewarmed. To finish, the end of a pretzel rod is poked into the meatball and garnished with a leaf parsley. To make placing the rod easier, cut a hole in the meatball.

These meatballs are delicious and easy, perfect for those shorter days, longer fall nights and every fall festivity.

Spooky and gruesome, the mummy is alive with these mummy hotdogs.

With the coming of Halloween comes the appearance of the frightening, scary — even perhaps the downright gross. These hotdogs may look like a mummy, but they are definitely delicious. While the process of mummification leaves some queasy, these mummy hotdogs won’t be repulsive.

America has a fascination with mummies. We’ve long been portraying the wrapped, grotesque figures in movies, to both the horror and delight of audiences. Hollywood has made nearly countless mummy movies, the first in 1911. That first of the genre was a silent short film about a man trying to impress his mentor that he is an Egyptologist, so he buys a mummy and reanimates him with electrical wires. Naturally, the more recent mummy franchise movies are more well-known — but just as unreal: mummies coming to life to terrorize human existence. Whether book, movie, or television, stories about the undead coming back to life are a lot of fun, just like these mummy hotdogs.

Quite possibly one of the easiest things to make, this is simply a hotdog wrapped in a crescent roll dough, baked and then decorated with candy eyes.

First, take the refrigerated crescent roll dough and roll out the entire roll of dough on a cutting board, sealing the seams with your fingers. Then, using a pizza cutter, cut the dough into strips. Wrap the dough around the hotdog, creating a strip effect, like one of those mummies on the movie posters; leave a section or two of exposed hotdogs to really go for the full mummy effect. Bake the hotdogs according to directions on the crescent roll dough package. Cool the dogs slightly, and then decorate with the candy eyes.

The littlest of mummies will come stalking in from their festivities to enjoy one of these mummy hotdogs, so make plenty!

We’ve got mummies on the brain with these jalapeno popper mummies from The Hopeless Housewife. A jalapeno popper wrapped in crescent roll dough will impress even the ghastliest of friends.

Mummies are always a great and easy costume for Halloween. It’s long been a last-minute costume favorite for moms everywhere. And kids like the mummy costume, too; fascination with all things gory and grotesque means that a mummy is perfectly suited for the kiddos.

The easiest of mummy costumes involve play clothes and toilet paper. Simply wrap the toilet paper around the body, leaving an opening for the eyes, nose and mouth, and you have a costume. The messier and more haphazard, the better.

Just like the mummy costume, these mummy jalapeno poppers are unnervingly easy and unearthly delicious. To make the jalapeno popper, start with the jalapenos sliced in half. Preserve the stems, but remove the pith and seeds. We recommend that you use plastic food-safe gloves, because jalapeno juice will stay under the finger nails and burn for hours.  And whatever you do, don’t touch near your eyes! That’s scary.

Next, mix the softened cream cheese and shredded jack cheese. Stuff the jalapeno halves with the cheese mixture.

Wrap these morsels in strips of crescent roll dough. Take one can of refrigerated crescent dough and separate into rectangles. Using a pizza cutter, cut the dough into 10 long strips. Wrap each jalapeno half with the dough, you may need to use two pieces. Just like a mummy costume, leave a space at the top of the pepper open. Brush the halves with the egg wash; this will help the poppers develop a delightful golden color in the oven. Bake at 400F for 8-10 minutes.Remove from the oven and gently press the candy eyes into the cheese (remove the eyes before eating, we’re not sure the sweet eyes will go with the spicy cheese of the jalapeno popper).

Jalapeno popper mummies are treat fit for the kings of all mummies. They are easy enough to pull together and fun enough to make an eternal impression.

The pumpkin is the traditional fruit of Halloween and the autumn months. In most parts of the country, pumpkin seeds are sown in the spring and summer. This gives the pumpkin plant the right amount of sun and heat to grow without scorching it — and to grow these gorgeous gourds. Pumpkins are harvested 90-120 days after planting, typically in the fall. So October is the perfect month for a pumpkin and gourd harvest.

With the abundance of pumpkins and other gourds during the fall, it’s responsible and resourceful to use all of the fruit, including the seeds. Pumpkin seeds are a powerhouse of nutrition to boot. High in magnesium, manganese, copper, protein and zinc, pumpkin seeds also have a ton of free-radical fighting anti-oxidents and phytosterols. Pumpkin seeds have been known to help the heart, liver and immune system, as well as combat diabetes.

We have one of the best recipes for roasted pumpkin seeds from Jessica Gavin. Roasting the seeds deepens the flavor. Pumpkin seeds are not all that tasty fresh from the fruit. They need drying, even if you use them raw.

To make these roasted pumpkin seeds, you will need to remove them from the pumpkin of course. Have the little monsters help with this step: they love the feel of slimy, stringy pumpkin guts. Rinse well, then dry the seeds as much as possible because this will help the overall taste. Toss the seeds with olive oil and seasonings, and then spread out in a single layer on a baking sheet. Roast the seeds at 35F for about 30 minutes, stirring every 10 minutes to keep the color even.

So easy, so tasty, these roasted pumpkin seeds will please a crowd at your annual Halloween party.