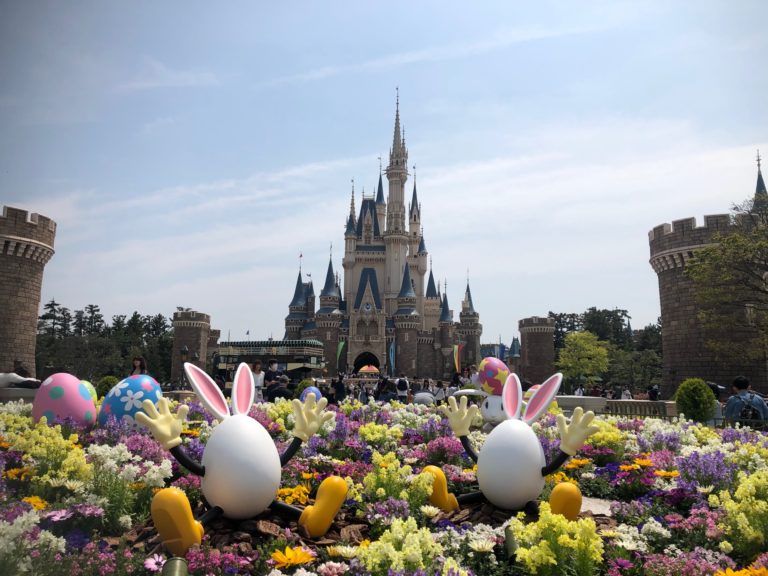 That’s the line that’s been stuck in my head on a loop after spending Easter at Tokyo Disney Resort in Tokyo, Japan. It’s one of a small handful of lines that are sung in English during Tokyo Disneyland’s “Usatama on the Run!” parade, which is the centerpiece of the park’s massive Easter celebration that lasts several months. But more on that in a minute.

Celebrating Easter in Japan is nothing like how my Catholic family used to spend the holiday in the U.S. In fact, very little about Japan is familiar to someone with Catholic, midwestern roots.

For starters, Japan isn’t a particularly religious country. Less than 40 percent of the population reports identifying with any organized religion at all, and of those who do, the vast majority report practicing Shinto or Buddhist faiths. Christianity is a minority religion in Japan, with less than 1 percent of the population reporting that it follows any Christian beliefs. And yet, though Easter is a decidedly Christian religious holiday, I started seeing Easter-themed decorations and specials popping up in Japanese stores beginning in early April. To find out more about how Japanese people celebrate holidays like Easter, I turned to Luke Fujii, a friend who works in tourism in Kyoto. 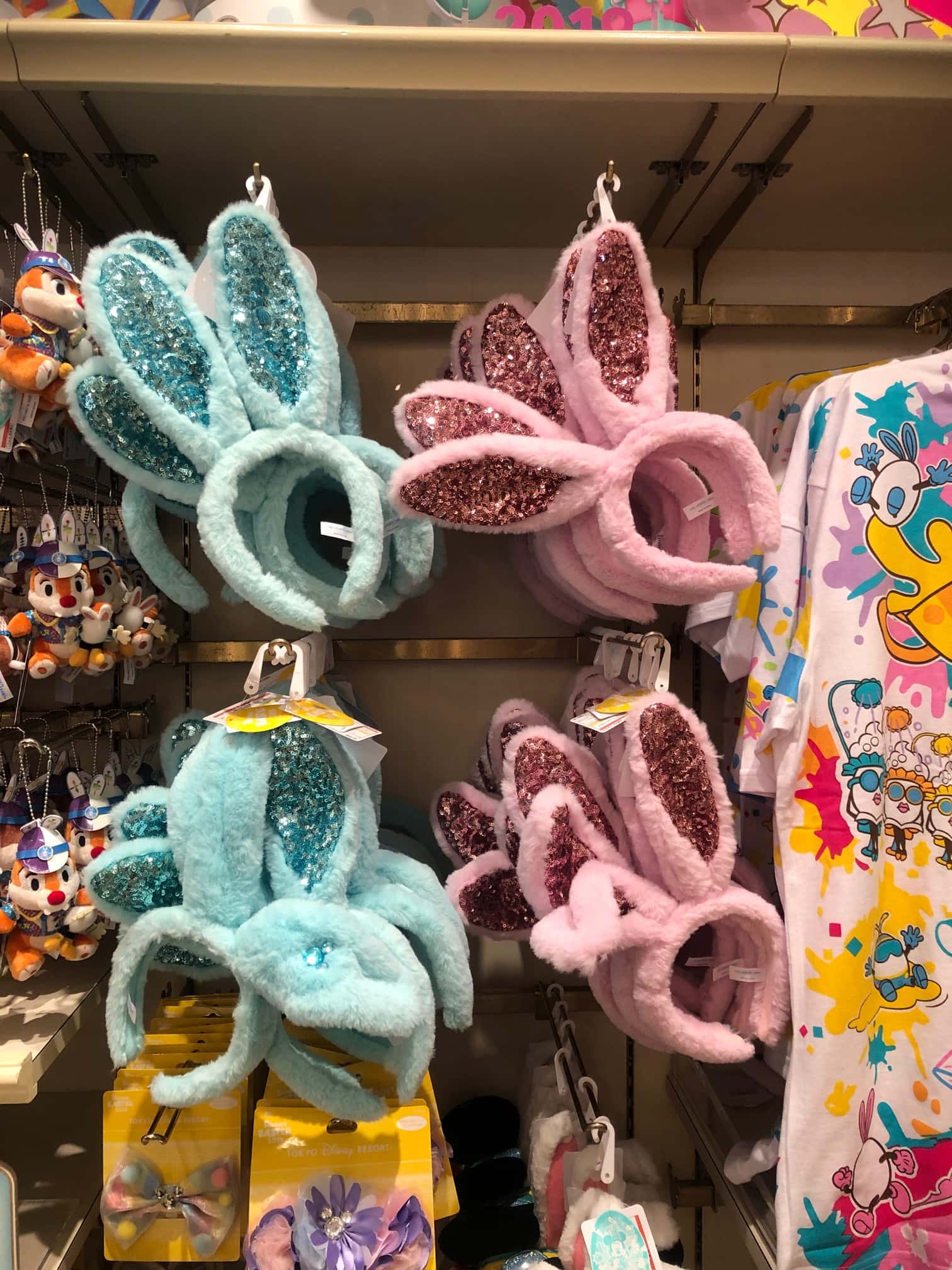 “There isn’t a tradition of Easter at all in Japan, but like other ‘Western’ traditional holidays, Japan has embraced its marketing potential,” Fujii explained.

Fujii also mentioned that out of the “big four” Western holidays (the other three being Christmas, Halloween and Valentine’s Day), Easter tends to be least visible, just because of the time of year in which it falls.

“Easter occurs at around the same time as Cherry Season, as well as the start of the new school year,” he said. “April is also when new employees traditionally join companies.”

To find an actual celebration of Easter in Japan, Fujii pointed me toward Tokyo Disney Resort and Universal Studios Japan in Osaka. Both companies are known for capitalizing on a good marketing opportunity, and Easter is just that, he said. Disneyland seems to be a little more serious about the holiday, with a celebration that spans from April 4 to June 2 this year. So I boarded a bullet train and headed for Tokyo.

Disney’s Easter celebration definitely embraces the more “cutesy” traditions of the holiday, without any of its religious roots. Pastel colored decorations, egg-themed foods and “Disney Easter 2019” merchandise are all over the park. At the center of all of Disney’s Easter events are usatama — painted eggs with arms, legs and rabbit ears. Their name comes from combining the Japanese words for rabbit (usagi) and egg (tama).

MORE: How to use Easter egg leftovers for a powerful DIY face mask 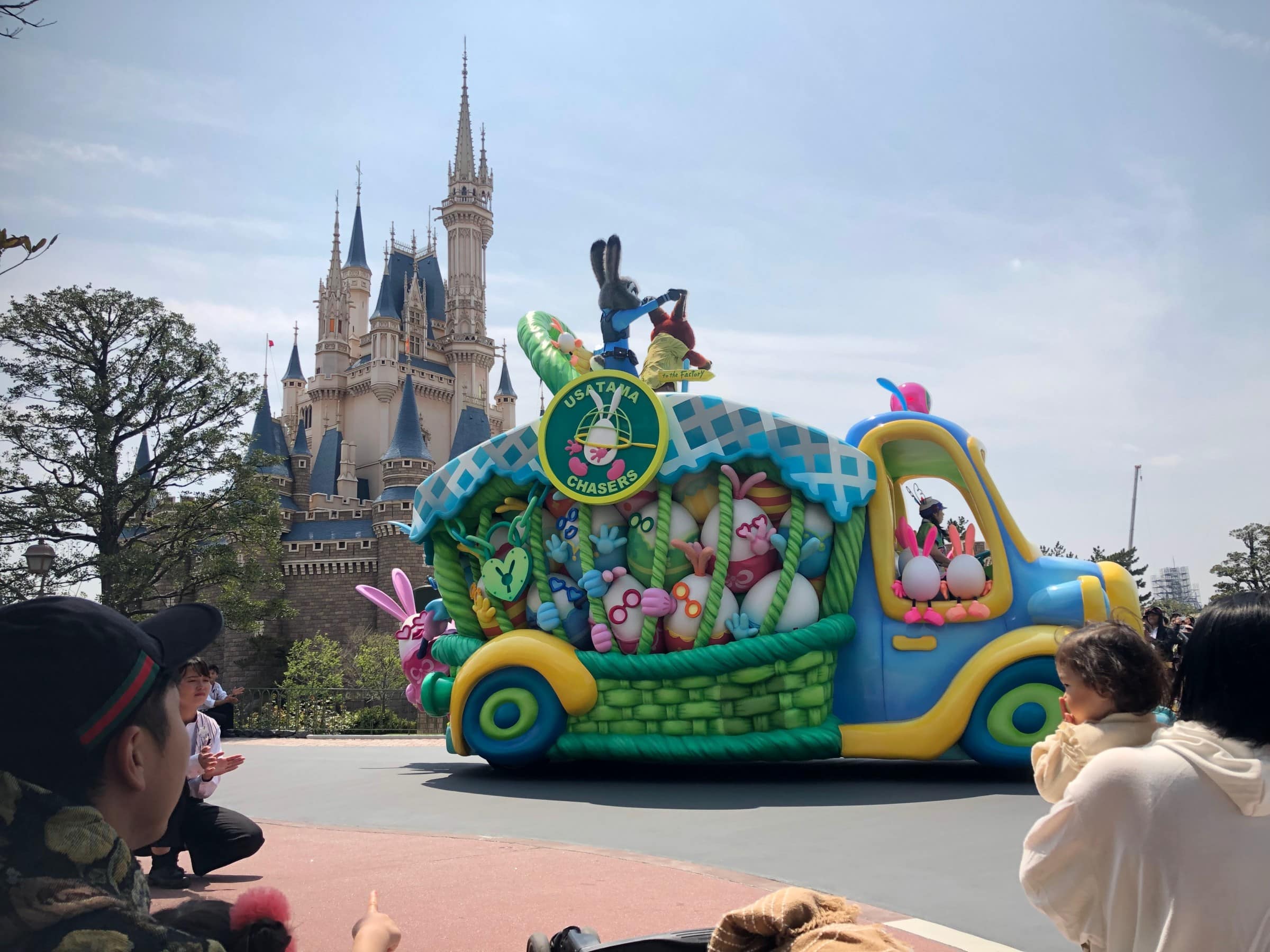 As the story goes, Mickey Mouse was creating Easter Eggs with a factory machine, when it malfunctioned and started popping out usatama, who proceeded to run off around the park to cause mischief. The twice-daily “Usatama on the Run!” parade features Disney characters with nets and police vehicles trying to round up the usatama before they cause too much trouble. It’s a very high-energy parade with some of the catchiest music I’ve ever heard at a Disney park (have I mentioned that it’s still stuck in my head?). 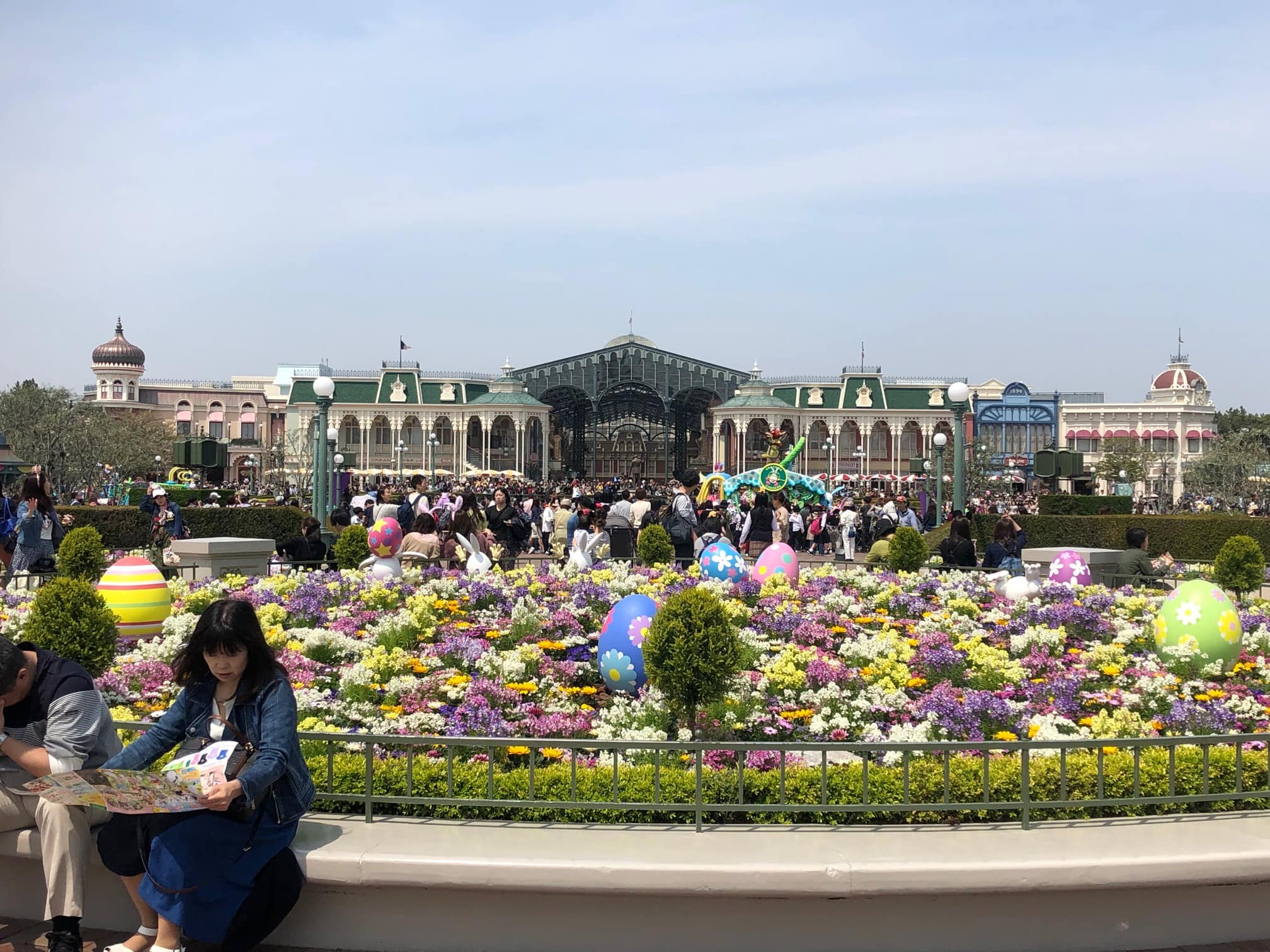 MORE: You’ve got to try this jellybean ‘Dole Whip’ recipe

There are also sculptures of usatama spread throughout the park, and visitors can help “catch” them by setting out with a special Easter-themed park map that shows where to find all the usatama.

While the Easter-themed parade was very fun and a lot of Disney’s special Easter merch was cute, the entire Easter celebration at Disneyland definitely did feel more like a marketing ploy than a celebration of the holiday, which at home would have included a trip to Mass and a huge family dinner. I had fun at Disneyland (because how can you not?), but I did find myself a little nostalgic for the way my family celebrated Easter when I was growing up. 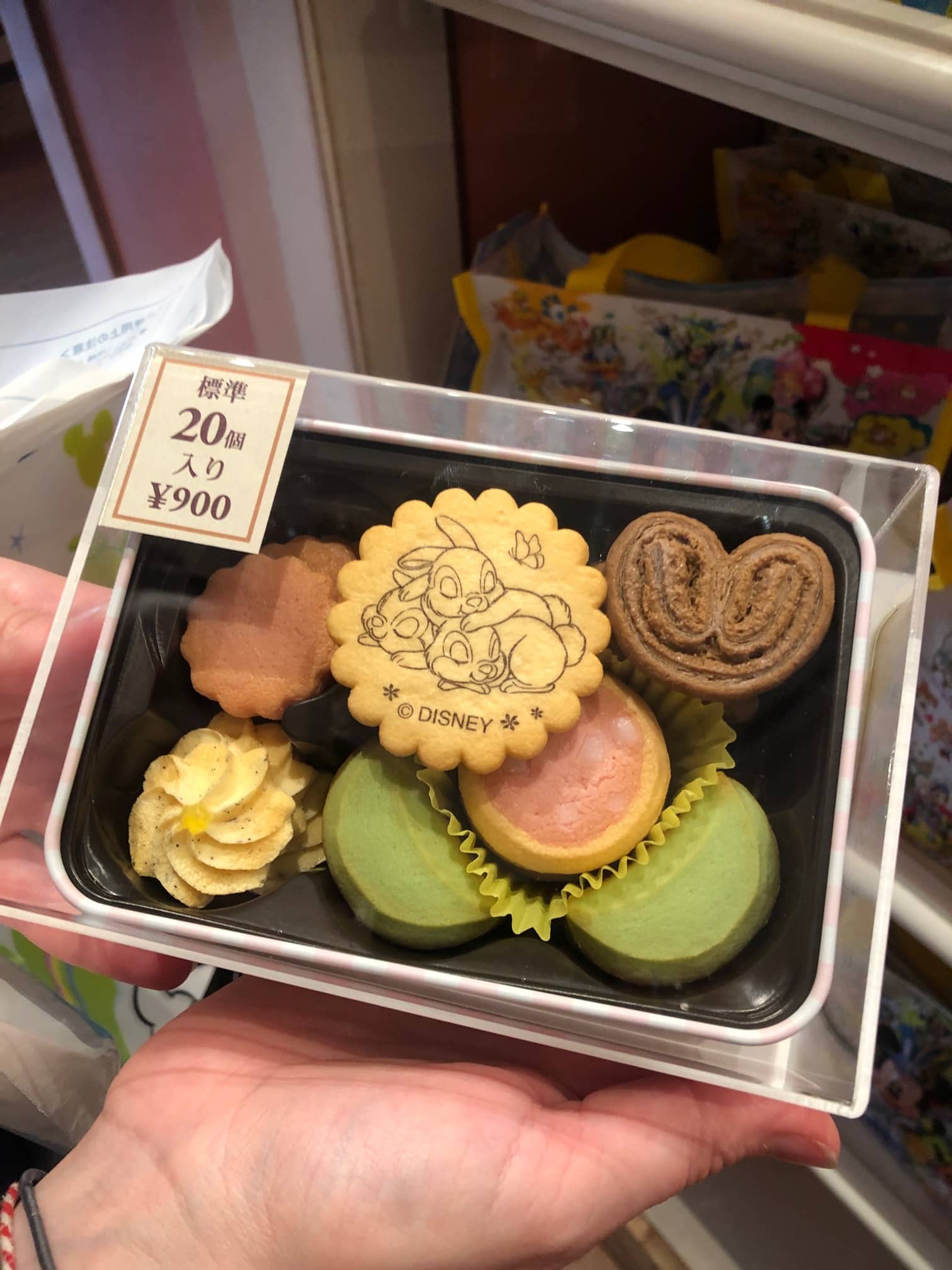 Then again, Japan has so many truly beautiful traditions of its own, and exploring and discovering those makes it hard to miss home too much.