8 Olympic crafts that will bring the family together 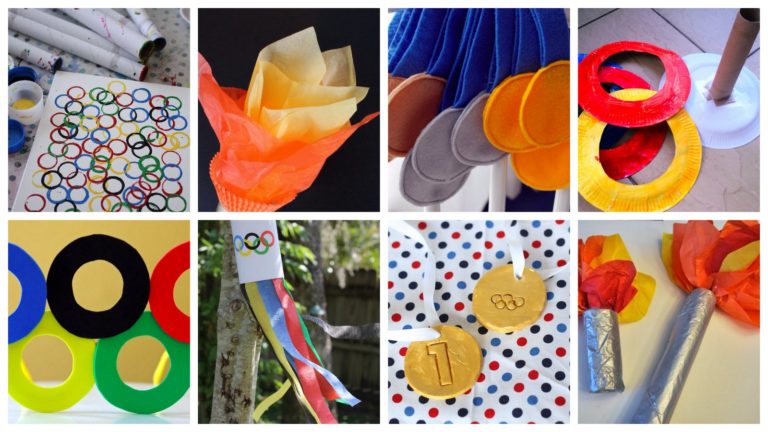 Every four years, the world turns its attention to the young athletes who are set to compete for the honor and glory of Olympic medals. It’s truly an accomplishment for the athletes and should be celebrated — but there’s more you can do than just watch the Olympic Games on television! Olympic crafts bring home the meaning and significance of such achievements for your kids.

Using paper towel rolls, paint and canvas, this Olympic ring art is the ideal craft for pre-school-age children and up. For cheaper canvases, visit your local thrift store and find old art to paint over.

Having an Olympic wind sock waving in your front yard while the nation’s best athletes march into Olympic Stadium is a patriotic picture. Using empty oatmeal containers, the tube is covered in white paper, cut-out circles are pasted on and then streamers attached.

Traditional ring toss gets an Olympic upgrade with this paper plate ring toss. Make your own Olympic game out of it by having a contest to see who can get the most rings. The craft is easily made with paper plates and paper towel rolls, and it’s lots of fun for kids of all ages.

The final passing of the Olympic torch is the official start of the Olympic games. Although it’s a tradition given to the host nation’s most honored citizen, with this Olympics torch craft your littles can participate in their own ceremony. Toilet paper or paper towel rolls are repurposed and covered in foil. For the flames, tissue paper is folded and glued into the opening. Kids of all ages can make these torches!

Olympic medals made with baking soda and modeling clay

The gold medal is the highest prize given at the Olympics. And although the honor is reserved for the best of the best, your family can wear their own Olympic medals made with baking soda and modeling clay.

How about viewing the Olympics through these foam DIY Olympic eyeglasses? The glass forms are purchased through your local discount store, and foam circles replace the original decorations. Once glued, you have a super fun way to view the opening ceremonies.

Get into the Olympic spirit with these felt Olympic medals. Host your own family Olympic Games night and hand out these super cute medals to the winners. This craft does use a sewing machine, but you can use felt glue to make it more kid-friendly. Everyone is a winner in your house, so make a bunch!

This torch lights up the night while your family watches the opening ceremonies of the Olympics. This glowing tea light Olympic torch uses paper towel rolls painted or covered with foil, a cupcake liner, a tea light and tissue paper. Put it together and watch the kids have a ball with their own torch.