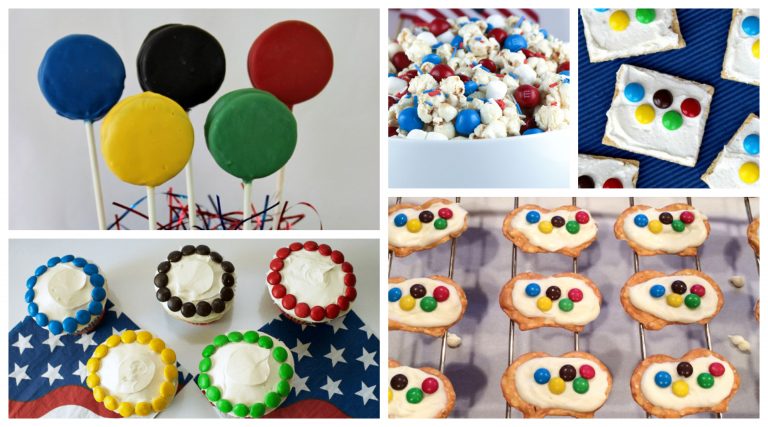 The Olympic Games are a golden opportunity to gather with family and friends in celebration of the world’s finest athletes and their achievements. To help get you into the spirit, we’ve rounded up 7 winning Olympic desserts.

Win in the dessert event with these edible Olympic medals made from Golden Oreos and Fruit by the Foot. Icing adheres the “ribbons” to “medals” that’ll have kid athletes going for the gold.

Get the kids involved with these easy, delicious Olympic ring graham crackers. Fun to assemble and tasty to eat, they’re a craft and a dessert perfect for any age.

Olympic ring cupcakes are simply vanilla cupcakes and frosting with rings made of Skittles. Victory is sweet, and so is this simple-to-make dessert.

The five colors of the Olympics represent the major regions of the world — and these Olympic Oreo pops represent major deliciousness. Oreos are made into pops and dipped into colored candy melts. Make a batch with the kids for a simple, fun family activity.

If your favorite country is the good ol’ USA, make this patriotic popcorn with mini marshmallows, red and blue M&Ms and coordinating sprinkles. It’s a delicious, marshmallow-y treat that will keep hands and mouths busy while everyone’s watching the Olympics.