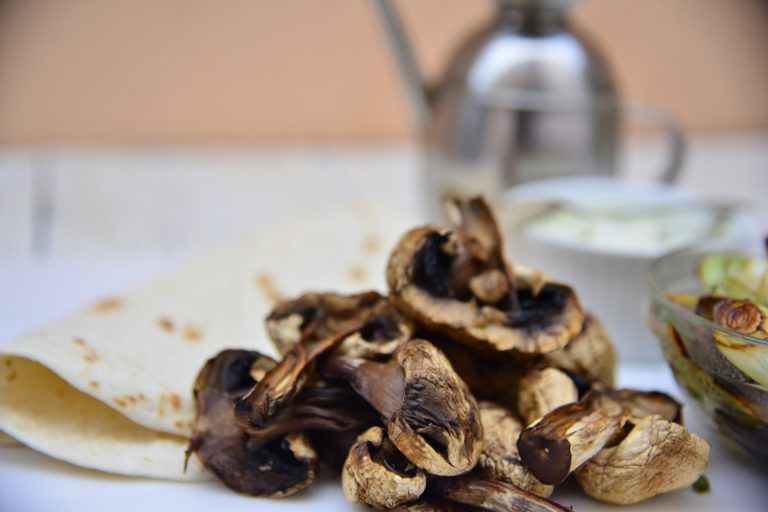 Though pumpkins and turkeys may come to mind first when we think of fall foods, there’s another gift that cool autumn rains can bring — mushrooms! And this recipe for maitake mushroom tacos will keep your belly happy all winter long.

White button mushrooms are available in most grocery stores year-round, but many varieties, especially wild ones, are only found at certain times of the year, or at least are at their very best at certain times of the year. Since nearly all mushrooms can be cooked in similar ways (if all other imagination fails, simply fry in butter and a splash of white wine) there’s generally little risk to trying new varieties, and it can be fun to explore the different flavors and textures, especially since mushrooms are not just tasty, but good for you too.

Don’t let the demure earth tones fool you — wild mushrooms pack just as much of a nutrient punch as other, more jewel-toned superfoods like matcha, salmon and acai. Mushrooms are surprisingly rich in protein and fiber, both of which help keep you feeling fuller longer and can, therefore, help you maintain healthy blood sugar levels.

Mushrooms are also a great source of potassium, which can help regulate blood pressure, and selenium, which supports immune function, and mushrooms are one of the few veggie-based sources of vitamin D, which can be hard to come by in months when sunshine is in short supply.

To get all the nutritional benefits of mushrooms, though, they must be cooked. Raw mushrooms are protected by a cell wall that is too hard for our digestive systems to break down. Heating them in olive oil or butter (or alternative oil of your choice) causes the cell wall to become denatured so that vitamins and minerals can be accessed and absorbed by our bodies.

One of my favorite wild mushrooms is the maitake mushroom, also known as hen-of-the-woods, which grows in clusters that look somewhat like ruffled feathers. These thin petals of mushroom crisp up beautifully when pan-fried, as long as you don’t overcrowd them, and in this recipe they really get to shine as a delicious and hearty taco filling where they’re paired with other fall favorites like pumpkin seeds and squash.

If you’re not familiar with mole pipian, it’s a thick, savory sauce made from pumpkin seeds and loaded with depth and spice. Like its more popular cousin, the chocolatey mole poblano, mole pipian is nutty and rich, but it has a bit more brightness to it and often isn’t quite as fiery. Look for it in Mexican grocery stores, where it’s often sold as a solid paste to be lengthened with stock before using. You’ll only need a little for this recipe, which just means you’ll have plenty left to try simmering anything you like in it,

For these tacos, start by roasting red kuri squash (I also like kabocha or delicata for this) in mole pipian for an addictive blend of spicy and sweet, and then fry up tender flakes of maitake in a mixture of olive and sesame oil.

MORE: Food and skin health: Which holiday treats to avoid for clear skin

Both the squash and the mushrooms get tucked into warm green chili tortillas and finished with a sprinkle of goat cheese and fresh cilantro for a fabulous bite of pure fall flavor. 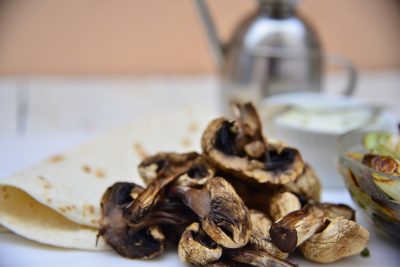