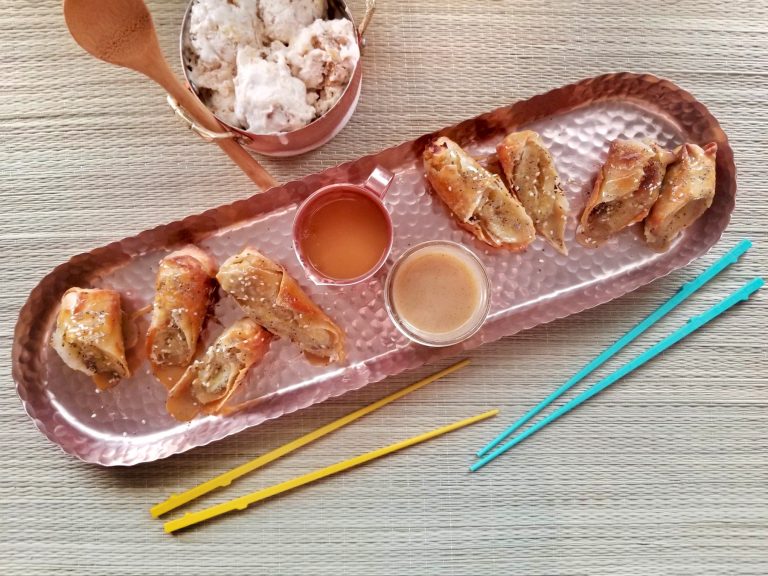 If you love PF Chang’s as much as I do, then you understand my excitement about the dessert recipe I’m sharing today. I’m talking banana spring rolls. This delectable fried dessert is only elevated by caramel and vanilla sauce drizzled on top. But the most surprising part of this dessert is the ice cream, which is packed with pieces of pineapple and crunchy toasted coconut.

Making a healthier version of this dish was right up my alley. I knew immediately that I could add a nutritional punch by rolling up hemp and chia seeds with the banana. And, just as with the healthier onion blossom, I knew my air fryer would do the trick in creating a decadent dessert that didn’t need to be deep-fried.

But that ice cream. So delish! And so not healthy. Luckily, there are coconut alternatives to evaporated and sweetened condensed milk — a base for a vegan ice cream alternative. Plus, I added ribbons of toasted coconut cashew butter for good measure. Drooling yet?

A few tips I picked up through trial and error: You’ll need slightly green bananas. Don’t use bananas that have been in the fridge or freezer; otherwise, they’ll fall flat and look like what’s supposed to go into banana bread.

Also, find the straightest bananas you can. Straight bananas are easier to wrap in the eggroll wrappers. If you find long enough bananas, you can slice them in half, making two rolls.

MORE: Vegan caramel apples are the answer to your dairy-free candy dreams 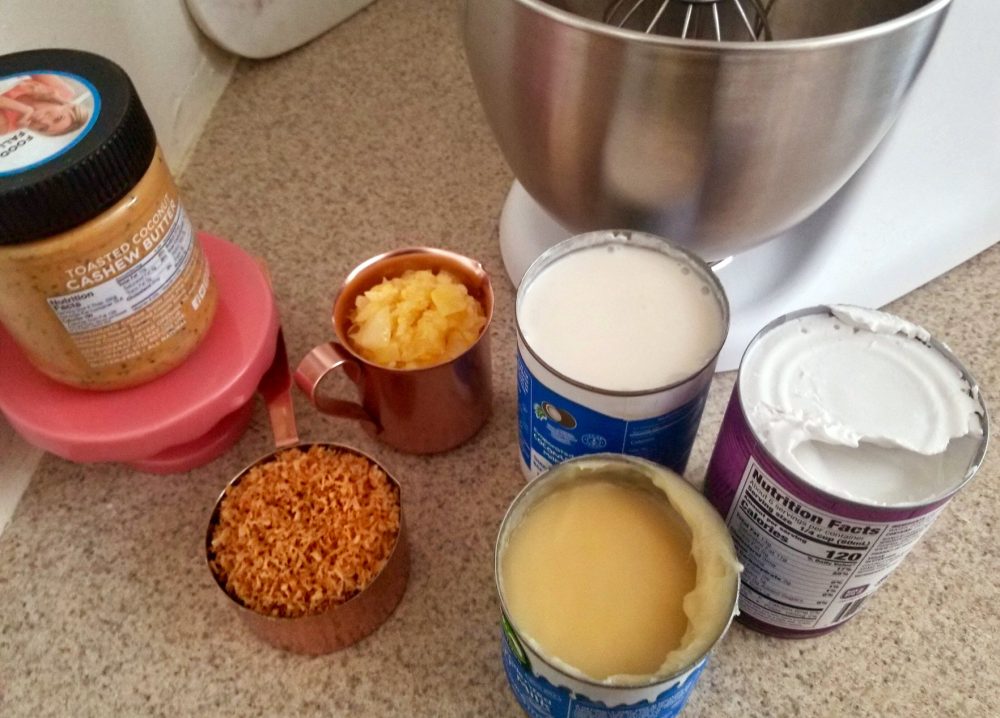 Be prepared for the aroma tease of the century. Pour a cup of coconut in a dry skillet over medium-low heat. Make sure the skillet is large enough so the coconut creates a thin layer. Watch the coconut closely, and stir frequently. The coconut will start to smell deliciously nutty and will begin turning brown in roughly 5-10 minutes. Once it has cooled, store it in an airtight container on the shelf until you’re ready to use it. 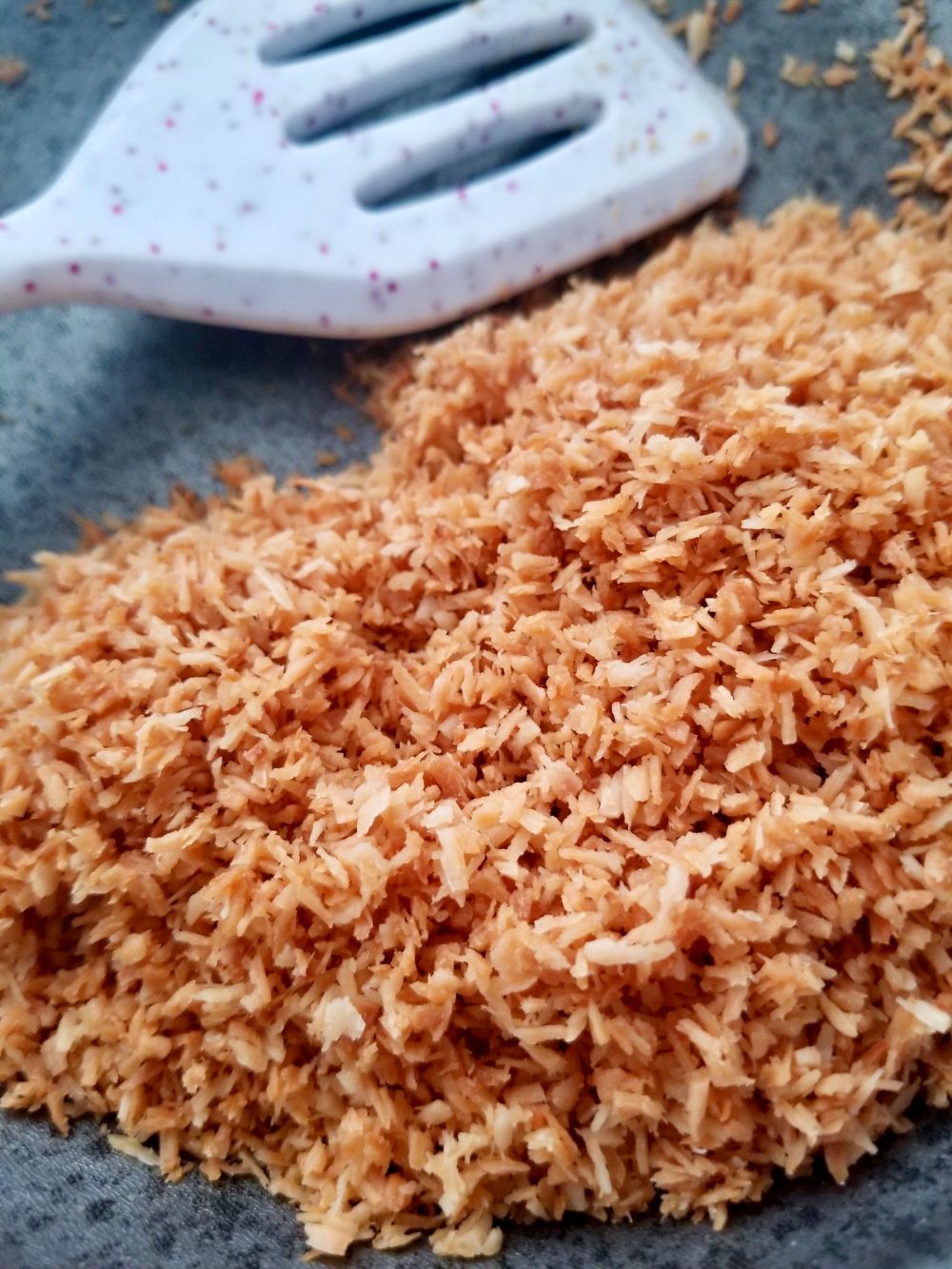 As for the ice cream base, simply mix a can of coconut cream (just the cream part, not the water), evaporated coconut milk and sweetened condensed coconut milk in a mixing bowl.

Super important: Scoop the chilled coconut cream, because it will separate overnight, leaving coconut water in the bottom of the can, which you don’t need for the ice cream. You can refrigerate that to use later. Whisk your ingredients together, then pour into ice cube trays or silicone liners, and freeze overnight. 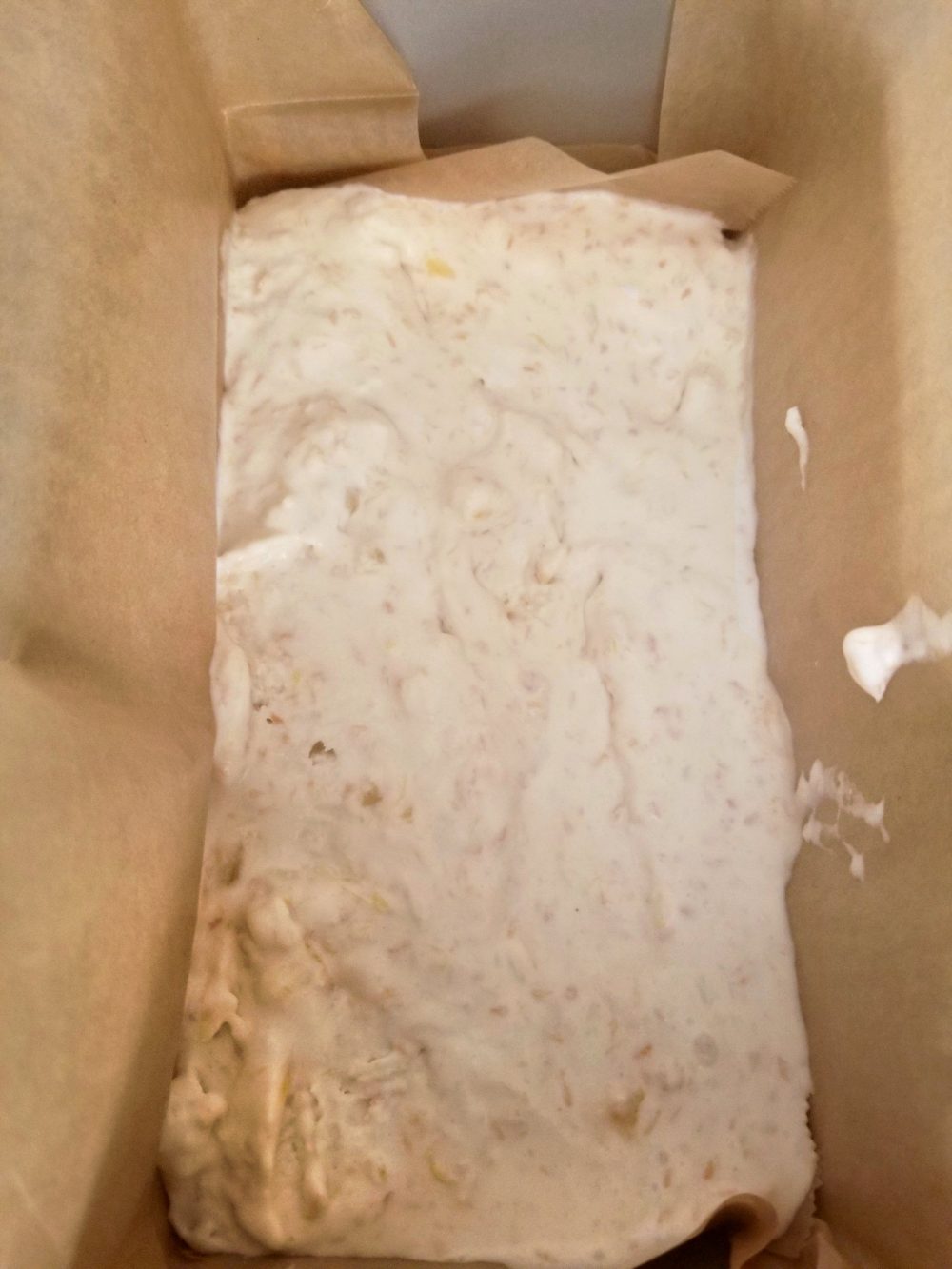 When you’re ready to make the ice cream, place the cubes back in a mixing bowl, and thaw for about 15 minutes. Using your mixer, blend until smooth, adding the crushed pineapple and toasted coconut. Transfer to a parchment paper-lined metal loaf tin.

If you’re adding the toasted coconut cashew butter ribbon, as I did: Pour in a third of the mixture, then a ribbon of the nut butter; repeat, and then finish with the ice cream mixture. Freeze for an hour, or until firm. Once it’s solid, you can top it with parchment paper to keep it from getting too icy.

PF Chang’s version comes with two sauces, and both are amazing! To make the caramel sauce, pour a can of sweetened condensed coconut milk, minus one-half cup for the vanilla sauce, into a small oven-safe dish, and cover it with foil. Place that dish in another baking pan with water in it; this creates a water bath that steams the milk in the oven.

Bake at 400 F for 30-40 minutes until it’s golden brown. Let it cool completely. Sprinkle with a pinch of pink salt flakes, and stir. If you’re doing a larger batch (yay, homemade gift ideas!), increase the baking time up to 60-90 minutes. 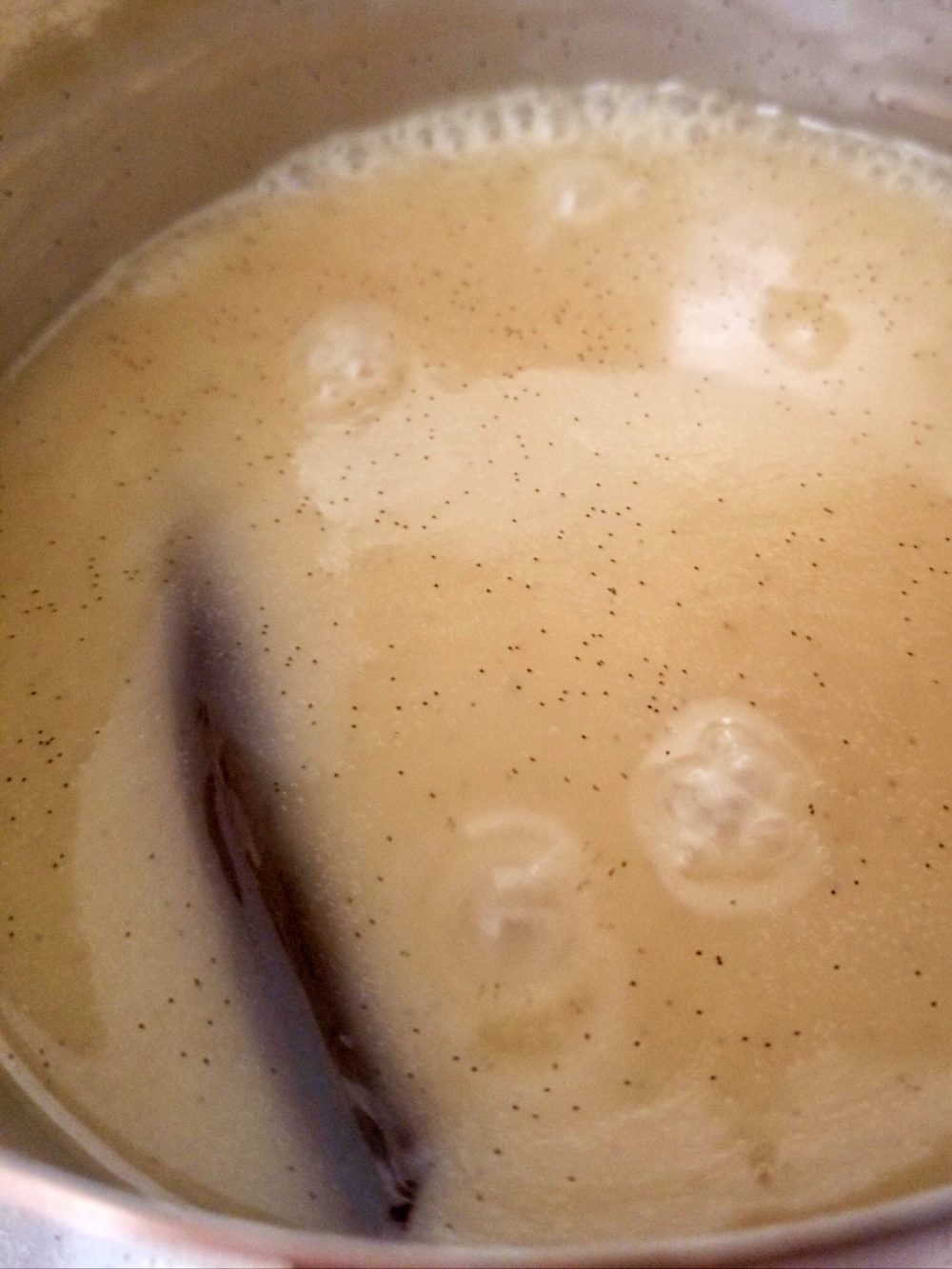 Now for the vanilla sauce: Split one-half of a vanilla bean pod and scrape out the seeds into a saucepan. Add the evaporated coconut milk and ½ cup sweetened condensed coconut milk. Throw in the pod while the mixture cooks for an added dose of vanilla. Bring it all to a boil over medium-high heat, stirring constantly. Then, bring it down to medium-low for 10-15 minutes, stirring occasionally. Cook it down longer if you want a thicker consistency. It will thicken as it cools, too.

First, a couple tips on bananas: You’ll need slightly green ones for the rolls. Take it from my trials and fails: Don’t use bananas that have been in the fridge or freezer; otherwise, your bananas will fall flat and look like what’s supposed to go into banana bread.

The other trick is to find the straightest bananas you can; they’re easier to wrap. The egg roll wrappers tend to bunch up on curvy bananas. If you find long enough bananas, you can slice them in half, making two rolls. 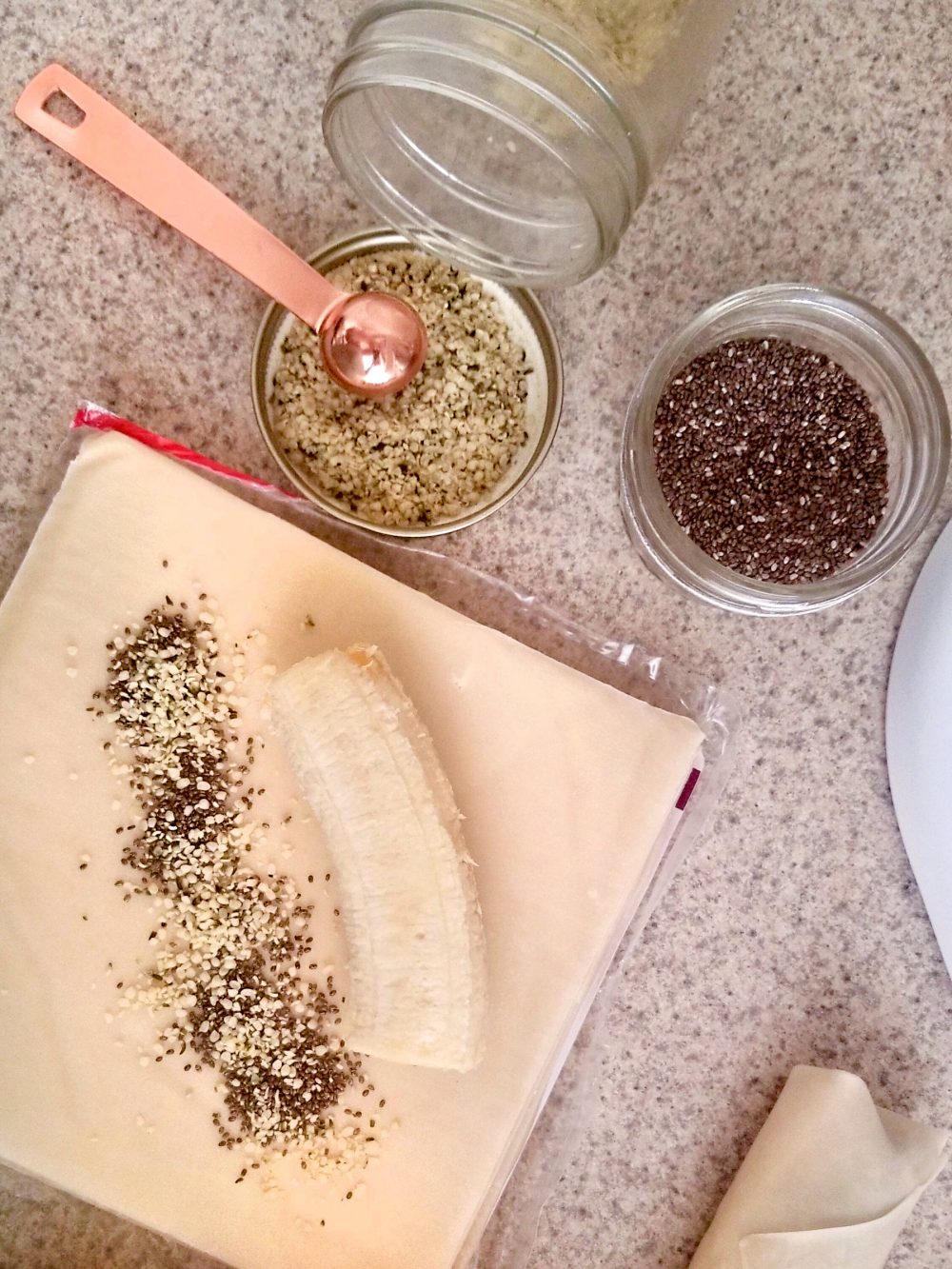 So, let’s roll. Place the banana on the wrapper. Spoon on some chia and hemp seeds. Wrap the top corner of the wrap over the length of the banana. Then, fold the two sides over the top and roll once, sealing in the seeds. Finally, slightly dampen the bottom corner to fold up and seal the wrapper.

Place the rolls in an air fryer, making sure they don’t touch each other, and spray with a light coat of coconut, avocado or olive oil. Bake at 300 F for 20-25 minutes or until golden brown, stopping to rotate them every 5 minutes. Once they’re done, place them on a platter and cut them diagonally. 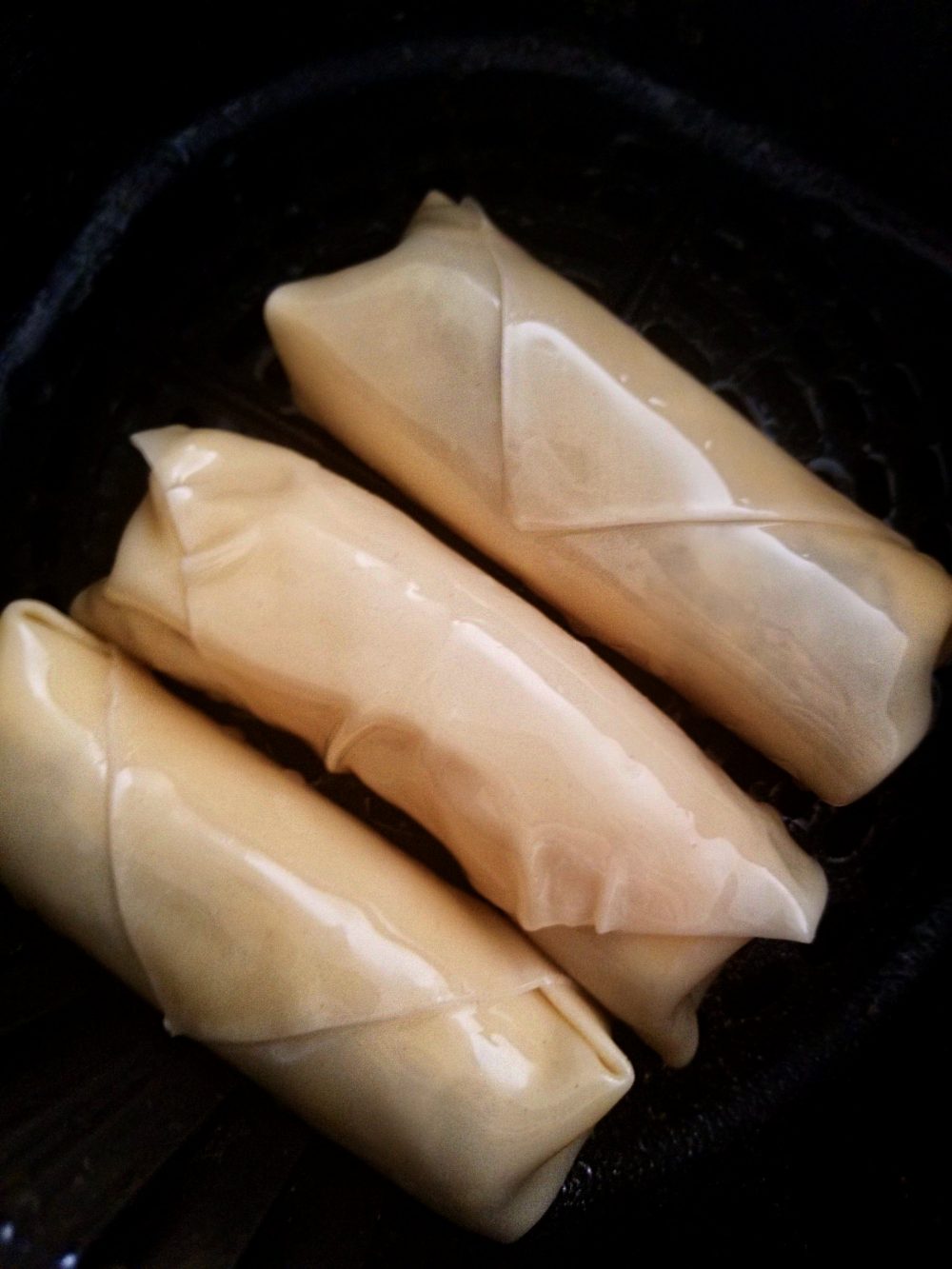 Pour the sauces over the banana spring rolls, and sprinkle them with sesame and poppy seeds. Serve with the vegan coconut pineapple ice cream and enjoy! 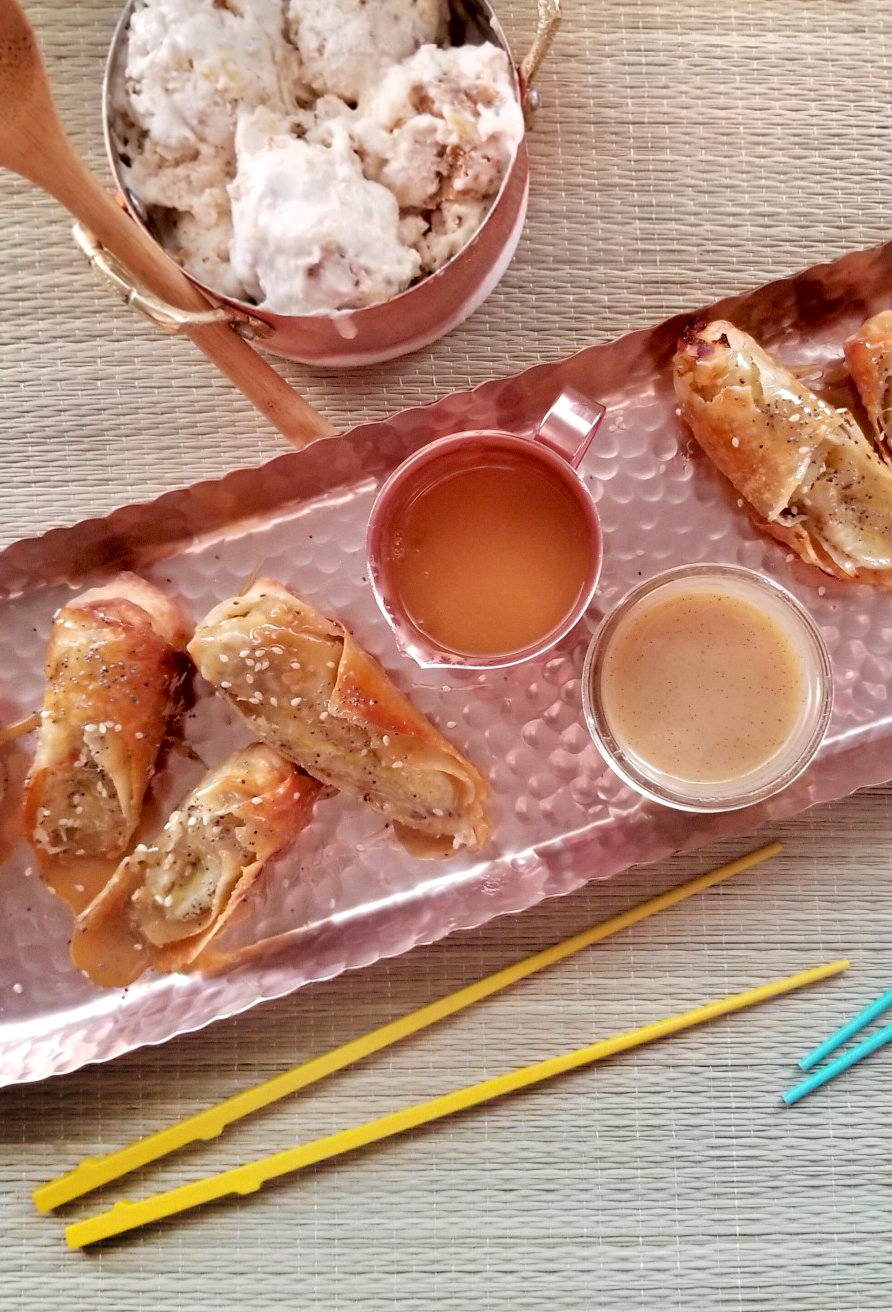 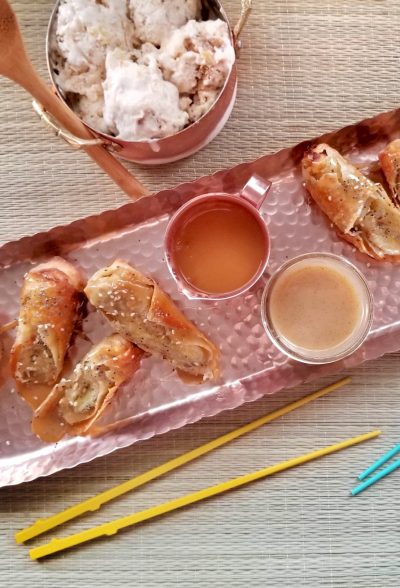 Looking for another healthy recreation? Check out our Starbucks copycat banana frappuccino recipe.