Should you rinse or wash your turkey? 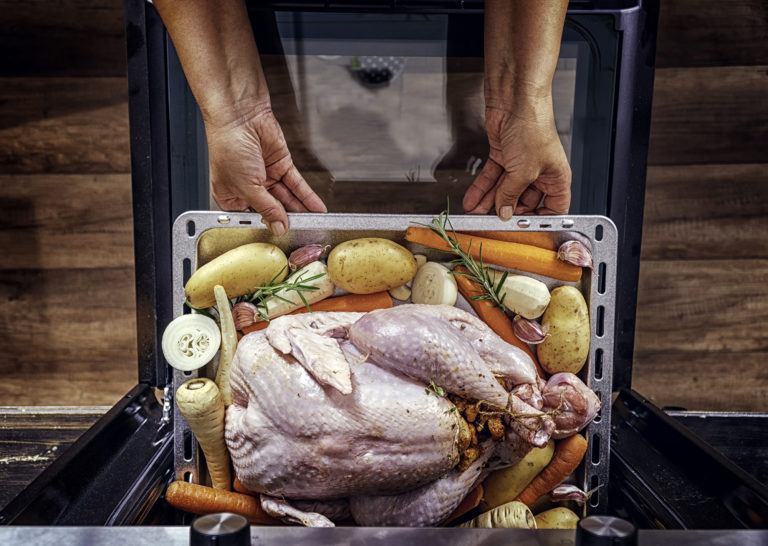 Washing typically leads to cleanliness, so for some people, it may seem to follow that turkeys and chickens can be made cleaner and safer by washing them before cooking. But does rinsing or washing poultry make it safer to eat?

The risk from rinsing or washing poultry

For years, people have been rinsing their turkeys before patting them dry and preparing them to be cooked. But is the practice actually helpful?

Actually, the answer to that is no: rinsing or washing your favorite tasty dinner bird before you pop it in the oven or deep fryer doesn’t clean it at all. In fact, it isn’t only “not recommended,” the process can actually spread more germs throughout your kitchen.

“Washing these foods makes it more likely for bacteria to spread to areas around the sink and countertops,” says Marjorie Davidson, a consumer educator at the FDA. When you’re trying to wrestle a bird in your sink, you’re actually spraying several different kinds of bacteria from those raw meat and poultry juices on to your sink, faucet, countertops, other dishes — even potentially the cabinetry and anything else nearby. “There are other types of bacteria that can be easily washed off and splashed on the surfaces of your kitchen,” the USDA notes. And if you don’t clean that stuff off, your holiday gift this year may just be a nasty case of food poisoning.

Fortunately, you can easily prevent cross-contamination from raw meat or poultry juices by washing down all of your countertops and sinks with hot, soapy water. The USDA also says that, for extra protection, you can sanitize with a solution of one tablespoon of unscented, liquid chlorine bleach per gallon of water.

Also, as awesome as it is to recycle and reuse most of the time, packaging materials from raw meat or poultry also can cause cross-contamination, so don’t reuse them with other food items. These and other disposable packaging materials — such as foam meat trays, egg cartons, or plastic wraps — should be thrown away (ideally closed up in a trash bag so you don’t end up touching it again).

There’s really no need to rinse

The whole concept of washing or rinsing turkey and chicken is pointless in the first place, because some of the bacteria are so tightly attached that you could not remove them no matter how many times you washed.

What will kill the germs? Cooking (baking, broiling, boiling, and grilling) to the right temperature kills the bacteria, making the whole outdated concept of washing these foods unnecessary.

Another way to beat the bacteria: Use a food thermometer. It’s is the only sure way of knowing if your food has reached a high enough temperature to destroy foodborne bacteria. Cook all raw beef and veal steaks, roasts, and chops to a minimum internal temperature of 145°F as measured with a food thermometer before removing meat from the heat source.

Hand washing after handling raw meat or poultry or its packaging is a a must, because anything you touch afterwards could become contaminated. In other words, you could become sick just by picking up and nibbling on a delicious little appetizer if you happen to do so while you’re cooking or preparing your turkey.

Nobody wants to spend Thanksgiving night camped out on the bathroom floor or visiting the local emergency room because of food poisoning. It’s a whole lot easier and much less stressful to avoid the situation in the first place by handling food carefully, cleaning all kitchen surfaces, and washing your hands often. Your stomach (and those of your friends and family) will appreciate your efforts!