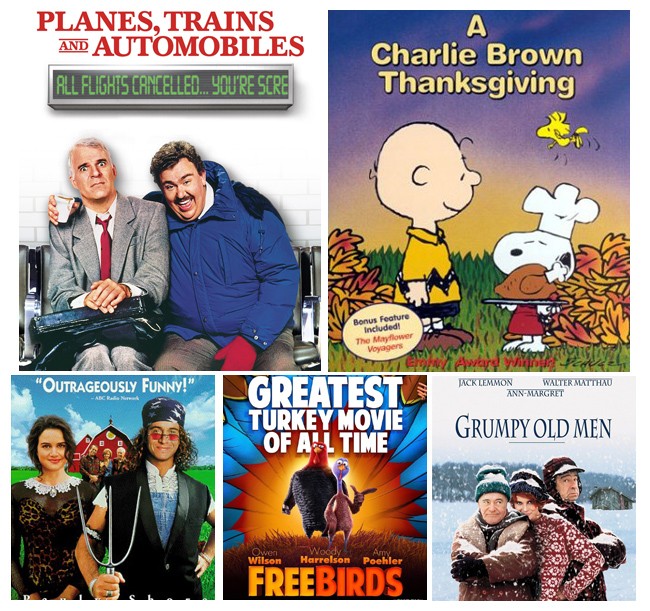 After all the turkey and stuffing has been put away and your family’s bellies are full to the top with pumpkin pie, gather everyone into the living room to watch one of the top Thanksgiving movies of all time! From a throwback favorite from the ‘80s with the beloved John Candy, and Pauly Shore’s hilarious ‘90s comedy, to the kid-friendly Free Birds and A Charlie Brown Thanksgiving, there’s something here for all ages.

In this classic ‘80s comedy, marketing consultant Neal Page races to catch a plane home to Chicago just two days before Thanksgiving Day, and finds out his flight has been delayed. He crosses paths with the obnoxious but loveable, Del Griffith, who is also headed to Chicago, and once their flight has been canceled, they hesitantly team up to get home for Thanksgiving by any means of transportation possible.

Originally aired on the CBS in 1973, the animated TV special, A Charlie Brown Thanksgiving, features Charlie Brown and Sally as they head to Grandma’s house for Thanksgiving dinner—but not before the other famous Peanuts characters, such as Peppermint Patty, Marcie, Franklin, and Linus get added into the mix.

Free Birds features two turkeys from opposite sides of the tracks who realize their fate and team up to change history with the goal of getting turkey off the Thanksgiving dinner menu. Stars include Woody Harrelson, Owen Wilson, and Amy Poehler.

With all the terrible ‘90s fashions we all wish we could forget, Pauly Shore’s unforgettable comedy features Crawl, a wildly eccentric college student from LA who accompanies his sweet, country girlfriend Rebecca, home to her family’s traditional farm for the Thanksgiving holiday.

Featuring Jack Lemmon and Walter Matthau as the ultimate grumpy old men, this film tells the tales of a true love and hate relationship as the two families come together for the Thanksgiving holidays despite their differences and complicated family and relationship dynamics.