Here’s why Thanksgiving is the best of all the holidays

The case for Thanksgiving as the best of all holidays 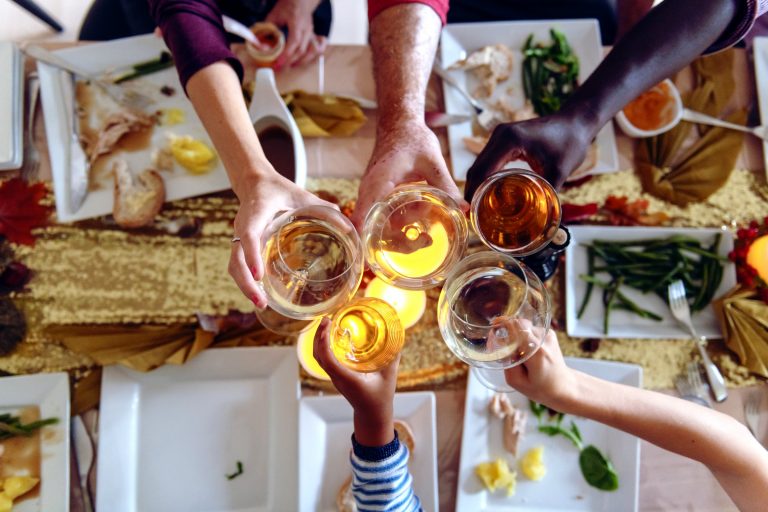 From the amazing turkey dinner to the cozy gathering of friends and family, it is no wonder Thanksgiving is so many people’s favorite holiday. It has the fun of Christmas, minus the stress of the decorating and gift-giving that goes along with it.

But for some — like those who have dealt with major challenges or who have overcome a health scare — the Thanksgiving spirit has added meaning.

Whether Thanksgiving means celebrating a big life change or simply enjoying a four-day weekend and football, for many Americans, Turkey Day ranks at the top of the list of the best holidays. Here are some of the reasons why.

Entertainment journalist Joel Amos has a new appreciation for life after he was given just a 15 percent chance of survival following an aortic dissection — a serious heart condition, necessitating emergency surgery.

“When we gather around the table at Thanksgiving, and each of us offers our thoughts as to what we are thankful for, I try not to take so long that we’re opening Christmas presents by the time I conclude,” Amos says. “It is because there is much to be thankful for. For one, I should not be here — twice over.”

Amos was just 46 years old when he started feeling extreme chest pains while away for work in New Orleans. He was rushed from a movie set to the hospital, where doctors gave him the grim news.

“I was told to call my wife and tell her goodbye and to wish her well in raising our then-almost-2-year-old daughter,” says Amos.

Luckily, Amos beat the odds and had a successful surgery. One year later, he beat the odds again when doctors discovered an aneurysm in his aorta, thanks to Amos insisting on a CT scan during his checkup.

He underwent a second successful emergency heart procedure, and rather than focusing on the stress and pain these health issues brought into his life, instead, he emerged from these medical scares with a bold new appreciation for life.

“Needless to say, each Thanksgiving — and every day, for that matter — I thank the heavens above that I am still here.

“I am thankful that I can still be a father to my little (now-5-year-old) girl, be a husband, son, brother, cousin and friend to many,” Amos says. “I also give thanks that I can share my story with people in hopes of saving their lives as well.”

“Thanksgiving is a chance to bask in that glow, and another opportunity to reiterate to anyone sitting around my table on that day that life is short, and we are here to love and be loved,” he says.

Thankful for a baby girl

After a long battle with infertility, including surgery to remove one of her fallopian tubes, four intrauterine insemination attempts, two in vitro fertilization (IVF) attempts and two canceled IVF donor egg cycles, Stacie and her husband, Luke, will at last be celebrating Thanksgiving for the first time as a family of three.

“On November 24, 2017 — 661 days after starting our journey at Arkansas Fertility — we received the best news ever: I was finally pregnant,” she says. “On August 4, 2018, we welcomed our miracle baby girl, Elsie Audrey.”

“This Thanksgiving, we finally have our family of three we so desperately desired for so long. We are so thankful our dreams finally came true,” says Hollowoa.

The new mom and dad look forward to the chance to start new traditions with their daughter, including time-honored favorites like going to the pumpkin patch and taking family pictures each fall.

This year will be a close-knit celebration, with the focus on their newborn. “Our Thanksgiving will be small, with just immediate family celebrating together with our miracle baby.”

Thankful for the welcome

Many people are especially grateful for the welcoming spirit and sense of community that the holiday brings out in people all across the country. TV reporter Melike Ayan moved from Turkey to the United States in 1996, and says that Thanksgiving is her favorite American holiday.

“I love the fact that families opened their homes and kitchens. I was missing my family gatherings a lot when I first came to the U.S., and this holiday made me feel at home,” Ayan says. “I was invited to many different family [celebrations], with many different Thanksgiving traditions, and the one thing that was common was the togetherness and the gratefulness.”

MORE: Friendsgiving: Celebrating with friends who don’t have family nearby

Thankful for the inclusiveness

Communications and marketing specialist Angela Betancourt now splits her time between Miami and New Jersey, but she lived and worked in Sierra Leone for two years, and celebrated Thanksgiving there.

“Thanksgiving is celebrated by Americans all around the world, and non-Americans participate,” says Betancourt. “Americans opened their homes for a potluck, and everyone joined in. It wasn’t just an American holiday; it was a time for all people to come together.”

In particular, she appreciates that Thanksgiving is a holiday that welcomes all, regardless of religious beliefs or cultural traditions.

“Thanksgiving is inclusive,” Betancourt says. “I love that Thanksgiving is not about religion. I don’t have a problem with religion, but it’s nice to have a holiday that isn’t centered around it. Everyone can celebrate it.”

MORE: Working off that big Thanksgiving meal – together!

Thankful for a stress-free holiday

Others make the case for Thanksgiving being the best holiday because there are no big expectations, as is often the case with Christmas, and it is a gift to to all of a guilt-free day of food, family, fun and football.

“I’ve always said that Thanksgiving has all the food, family and friends of Christmas, without the financial pressure of gift-giving,” North Carolina-based web content specialist Idoia Gkikas says.

Kevin Darné, an author from Chicago, adds that Thanksgiving has a few major things going for it. “Weather-wise, there may be enough chill in the air to use the fireplace, but it’s a far cry from feeling like a brutally cold winter day,” Darné says.

In addition, he says it is a less commercial holiday, has great football games to watch during the day, and new movies are often released around Thanksgiving.

“The gathering of friends and family whom one doesn’t see regularly, along with the traditional major meal, makes it special,” Darné says.

MORE: 5 ways gratitude can save your holidays

Thankful for a long weekend

A stress-free holiday focused on food and fun, and a long weekend? Yes, please!

“There is a built-in four-day holiday weekend for many employees and students,” Darné says. “People may opt to use the Wednesday before Thanksgiving and the Monday after as vacation days, essentially giving themselves six days off for the cost of only two PTO days.”

MORE: 10 ways to give back with your family

The recurring theme with what makes Thanksgiving so special is that it makes people reflect on the importance of family. That’s something Jason Compton, a father of two living in Tulsa, Oklahoma, will never forget to appreciate — especially around this time of year.

Just a few weeks before Thanksgiving in 2016, his mom was diagnosed with a deadly form of cancer. The doctors said she probably had about two months left — and the family wasn’t even sure she’d even survive until the new year.

“Knowing that this could be the last Thanksgiving I’d get to spend with her made me really appreciate it even more,” Compton says.

“Not only did she make it to Christmas, she lived another year and a half,” he says. “I got two more Thanksgivings, two more Christmases, and all the other holidays and life events in between.”

The experience gave Compton a new appreciation for so many of the moments we often take for granted — and gave him a thoughtful new reminder of the joys to be found in the holiday season.

Thankful to be thankful

The spirit of Thanksgiving is one of family, friends, love, inclusiveness, being grateful and, last but not least, fabulous food.

The holiday is a favorite for so many people because it isn’t focused on presents or extravagant decorations — it’s about sitting down for a delicious meal, surrounded by friends and family. There we get to take some time to reflect on our lives, and to appreciate what we have, who we are, and where we are right now. And for that opportunity in and of itself, we are thankful.