Breaking the Thanksgiving wishbone: A history

Thanksgiving is one of America’s most beloved holidays and is full of traditions. Some are relatively modern additions — but others, like the breaking of the turkey’s wishbone, have ancient origins.

Part of the turkey tradition involves the wishbone in the turkey carcass: Two people each grab a side and break the bone apart while making a wish. Whoever breaks off the larger part of the wishbone will have their wish granted. 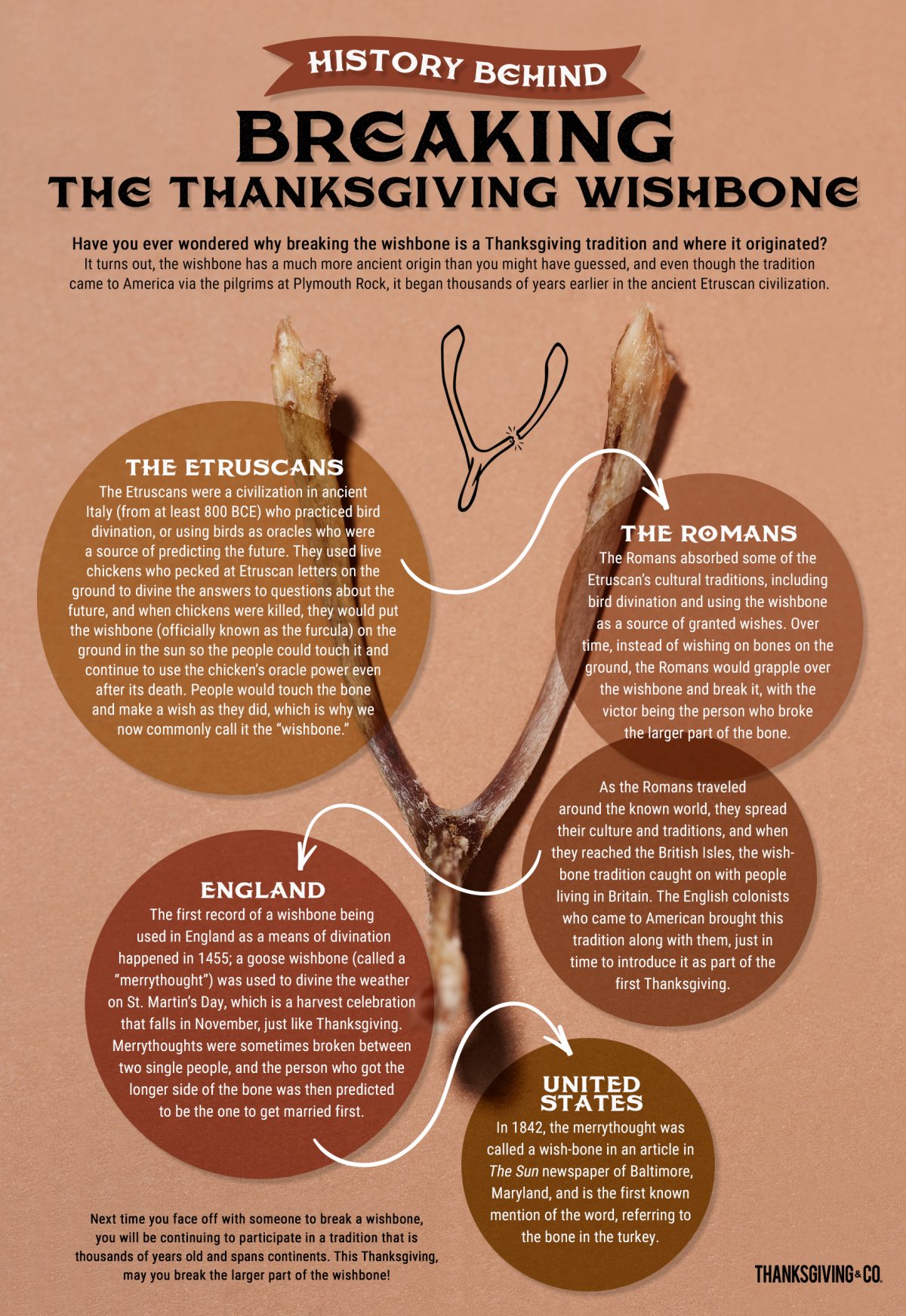 Where did the wishbone tradition start?

The wishbone ritual is much older than you probably suspect, even though it came to America with the pilgrims at Plymouth Rock. In fact, it began thousands of years earlier in the ancient Etruscan civilization.

The Etruscans were a civilization in ancient Italy (from at least 800 BCE) who practiced bird divination — the practice of using birds as oracles to predict the future. Chickens were allowed to peck at Etruscan letters on the ground to divine the answers to questions about the future. When a chicken was killed, the Etruscans laid the wishbone (technically known as the furcula) in the sun so the people could touch it and continue to use the chicken’s oracle power even after its death. People who touched the bone made wishes as they did, which is why we now commonly call it the wishbone.

The Romans absorbed some of the Etruscans’ cultural traditions, including bird divination and wishbone wishing. Over time, instead of wishing on bones on the ground, the Romans grappled over the wishbone to break it, with the victor being the person who broke off the larger part of the bone. The Romans brought their culture and traditions with them to the British Isles, and the wishbone tradition caught on there.

From merrythought to wishbone

The first recorded practice of wishbone divination in Britain dates back to 1455; a goose wishbone (called a merrythought) was used to divine the weather on St. Martin’s Day, a harvest celebration that fell in November. Merrythoughts were sometimes broken between two single people, and the person who got the longer side of the bone was then predicted to marry first. The English colonists then brought the poultry bone tradition along with them to America and included it in the first Thanksgiving celebration.

The first known mention of the word “wishbone” as it refers specifically to a turkey bone was in an 1842 article in The Sun newspaper of Baltimore, Maryland.

When you face off with someone to break a wishbone, you carry on a tradition that harkens back thousands of years and spans continents. Here’s wishing that you break off the bigger piece this Thanksgiving!