Dinner and a movie: ‘Home for the Holidays’ 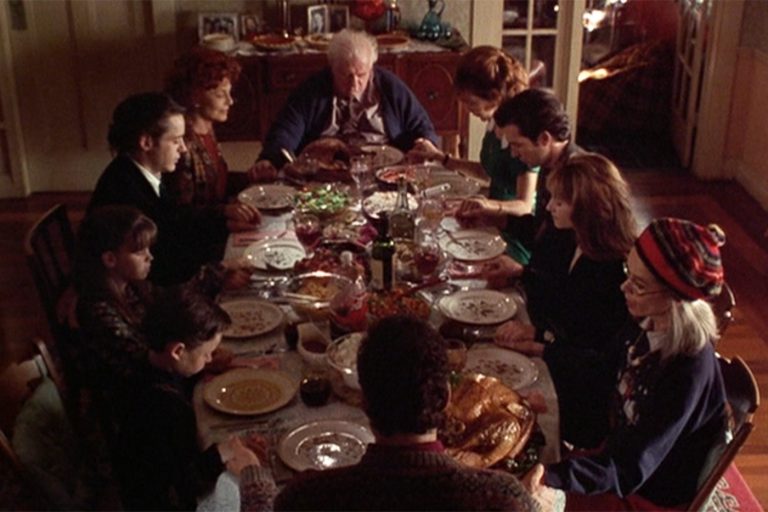 It’s that time of year: Time to start girding your loins against the inevitable onslaught of thinly veiled insults and renewed sibling rivalries when you gather at home for Thanksgiving.

Things could be worse. You could be Claudia Larson, who has the most hellish Thanksgiving weekend ever with her family in the Jodie Foster-directed flick Home for the Holidays.

This 1995 film was a sleeper that got average reviews, but watching it today brings a whole new appreciation for so many aspects of the storyline.

The home Claudia grew up in will be instantly recognizable to many as their own parents’ or grandparents’ homes in blue-collar neighborhoods. A hallmark? Small, cramped rooms filled with mementos from a different era.

To put together a Home for the Holidays-themed dinner and movie night, first, you need some awesomely ‘90s clothes (if you don’t have originals lying around, that’s OK — Target has plenty since the decade is back in style). Mock turtlenecks, plaid miniskirts with tights, and peasant dresses over jeans all fit the bill.

Get your Home for the Holidays on

Before you can enjoy your curated menu, you have to get the movie ready:

Dinner and a movie: Your Home for the Holidays menu

No family get-together in the ‘90s was complete without at least one six-pack of Zima. MillerCoors brought it back during the summers of 2017 and 2018, but it is long gone from shelves by now.

No worries! You can totally make your own, and it tastes even better. We like Food and Wine’s recipe.

MORE: We tried the egg cooker with a cult-following on Amazon—is it worth it?

Eggs are a thing in this movie.

In the opening scene, Claudia grasps an egg yolk and carefully pierces it to use in her restoration of a Renaissance painting, only to be fired minutes later. The woman sitting next to her on the plane messily eats a hard-boiled egg. When Michael and Larry are making breakfast, an egg is dropped on the floor. Coincidentally (or not), Jodie Foster’s production company is called Egg Pictures.

So, this egg-cellent appetizer — spinach artichoke deviled eggs — is perfect for getting your guests to settle in.

The pivotal scene of this Thanksgiving movie takes place over a traditional turkey dinner, much of which winds up all over Claudia’s super-uptight sister.

Pay homage to that moment by roasting up this gorgeous orange, anise and thyme turkey and stuffing it with our all-American stuffing. And definitely do not dump it on your sister’s head, no matter how awful she is.

If you have some pescatarians in the group, or you just aren’t a turkey fan, go with fish.

Claudia’s main method of talking herself off the ledge is to pretend she’s a fish: “Just float, just float,” she repeats when uber stressed. It is no coincidence that Leo’s last name is Fish. And this grilled salmon with maple syrup and rosemary is just as rich and delicious as Dylan McDermott.

Aunt Glady will only eat her own sweet potatoes, and if she made this recipe, we don’t blame her. Roasted sweet potatoes with cinnamon pecan crunch might be your favorite part of this meal, too.

Claudia’s dad has a whole stealthy method of sneaking tastes of the Thanksgiving pie, and you’ll want to join him if this great pumpkin pie is waiting around to be eaten.