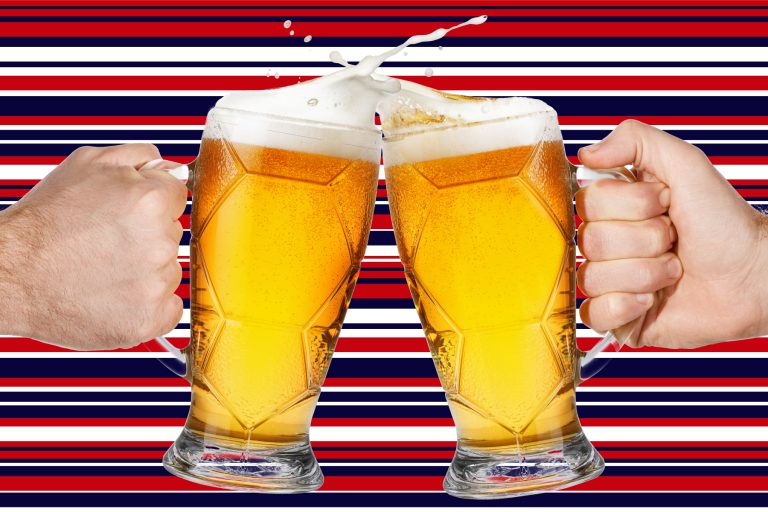 So 4th of July is coming up and — in your social circle — it’s your turn to throw a kickass party. You know, the kind that keeps going well into the next morning, when everyone eventually crashes and wakes up. The next day, there will be stories. So many stories. Legendary stories about that time you threw the killer 4th of July party.

TBH, though, it’s a lot of pressure to pull off the kind of 4th of July party that turns into an all-night rager. You can’t exactly toss a bottle of vodka and a can of Pringles on the table and call it a day. Well, you could, and that would be a mood, but it won’t last long enough for your get-together to reach peak rager realness.

What should you do? We put together a quick and dirty checklist to help you.

Wake up, take a picture of all the star-spangled booze you bought for the party, and send it to your friends. Video of Fourth of July fails not mandatory, but recommended AF.

2. Dress for the occasion

Break out your best ironic tank top or T-shirt that captures how unironically you love your country. Anything that says “Merica” or “Let’s get lit” with a picture of fireworks will do.

You can’t have a rager without some bangers. There are lit-rally about 100 different directions you could go here, but it’s never a bad idea to throw a few patriotic classics into the mix. And by patriotic classics, we clearly mean “American Boy” by Estelle, “Firework” by Katy Perry, “American Girl” by Tom Petty, “America, F**k Yeah!” by Team America: World Police, “Freedom” by Beyoncé and, if you’re really feeling liberated, “Party in the U.S.A.” by Miley Cyrus.

Buy enough vodka, bourbon, box wine and craft beer to fill up a small pool. You won’t actually be filling up a small pool unless, wait… that’s kind of brilliant. Buy a red, white and/or blue kiddie pool, fill it with ice, and use it as a giant cooler. It can double as relief from the blaring sun once the ice melts.

Partygoers can’t live off booze and bangers alone. Those might feed their soul, but they also need something to feed, ya know, their mouths. If you’re one of those crafty Pinterest people, you probably already have a table full of red, white and blue snacks and desserts artfully arranged on a red checkered tablecloth. Everyone else: chips, dip, hotdogs, burgers, baked beans, potato salad, corn, wings, cupcakes, coleslaw, repeat.

6. Crack open a cold one

Whether it’s a cold brew coffee or an IPA, take a break. It’s your right as an American to procrastinate a little.

Make sure everyone knows where the bathrooms are, what rooms are off-limits and that your dog is not allowed to shotgun beer. Because, well, you’d be surprised how often that might come up in conversation. Make sure you have enough places for people to sit and mingle so they don’t wander into the yard of that neighbor who has the local precinct on speed dial.

If you don’t turn at least one moment from your 4th of July party into a meme or sticker, did it even happen? Don’t forget to hashtag memes, photos, blurry videos and Snaps featuring Uncle Sam filters with #Merica.

9. Sing the hell out of your pre-made patriotic playlist

Loudly announce to everyone anytime you “love this song!” Encourage everyone to sing along — nothing feels more patriotic than a group of friends singing loudly and slightly off-key together.

Or a balloon. Or any other prop you need to pull off a fun 4th of July game or two. Just don’t let anyone who has had too much to drink play any games involving darts, swimming or other sharp objects. The key to longevity is making sure everyone has a boozy good time… without maiming themselves or others.

MORE: Make your own circle American flag towel with pom-poms

Congrats! You managed to throw a  4th of July party that crept into the next day. Sure, some people will just wake up and graze on leftover pre-packaged party food. But you can’t get much more extra than serving up one piece of edible Americana to cement your status as the master of all Fourth of July party hosts. Patriotic waffles? God (bless America), yes.