How to make vegan deviled “eggs” 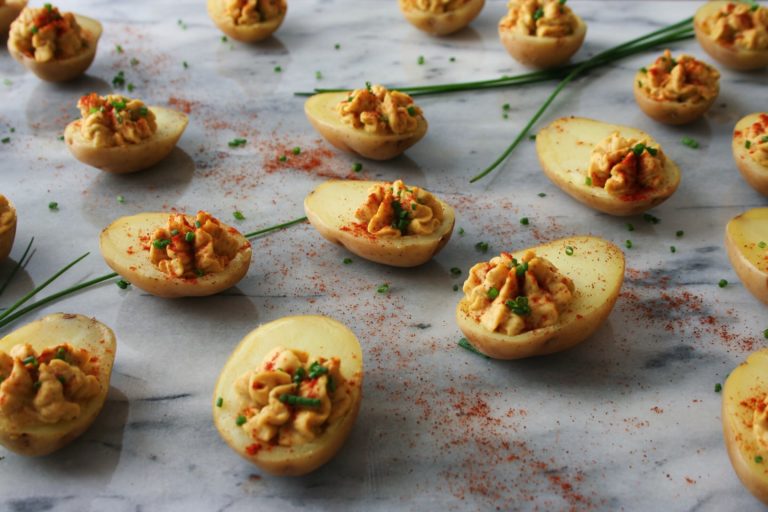 Is it just me, or does every gastropub from here to Timbuktu have a fancy version of the deviled egg on their brunch menu? We know why, though — deviled eggs are the original gangsters of finger food. According to the History Channel, deviled or “stuffed” eggs started appearing in Spain in the 13th freaking century. That’s a long time ago.

But — and here’s the bad news — deviled eggs are pretty unhealthy and pretty un-vegan. While we can’t commend the 13th century homemakers for their attention to our modern-day standards in nutrition, they really were onto something with deviled eggs in terms of flavor. No doubt, this flavor is why deviled eggs seem to be having a little culinary renaissance of sorts. And if there’s one thing I hate, it is being left out of a culinary renaissance. So, of course I had to remedy this.

Enter the deviled potato (aka, the vegan deviled egg). 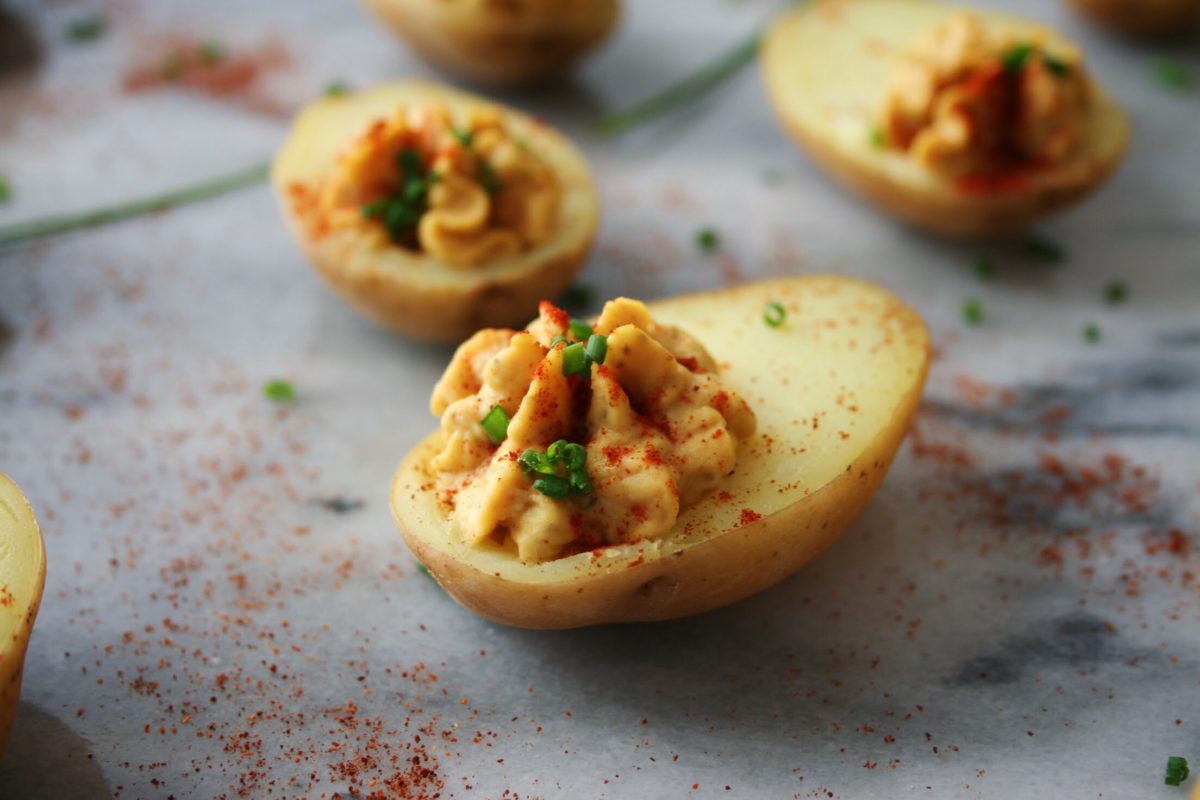 These are the perfect replacement for deviled eggs. They are creamy, tangy, decadent and they taste shockingly like eggs, thanks to a special ingredient called kala namak. As an added plus, they are quite a bit healthier than the OG version. Significantly lower in fat and cholesterol, these little gems make a wonderfully health-conscious addition to every vegan and non-vegan brunch spread.

Whenever I am trying to create a vegan version of a dish, I like to start by breaking down the ingredients in the original dish for inspiration. The star ingredient of deviled eggs is, well, eggs. No surprises there.

To make deviled eggs (just in case you don’t already know), the eggs are first boiled and then cut lengthwise with the yolks removed. Then the yolks are mixed with mayonnaise and an assortment of spices similar to what you might find in a traditional potato salad, and then the egg whites are filled with the yolk mixture. So, basically, deviled eggs are just egg whites stuffed with egg yolks that have been mixed with a whipped egg and oil emulsion. That’s a lot of egg.

In this vegan version, we start by finding some white baby potatoes. The trick is to pick out potatoes that look egg-shaped, if you really want to get fancy. I like to get fancy. Boil the potatoes and cut them lengthwise, then scoop out a rounded center using a melon baller (or just a regular old spoon) and fill the space up with a faux-egg yolk mixture. 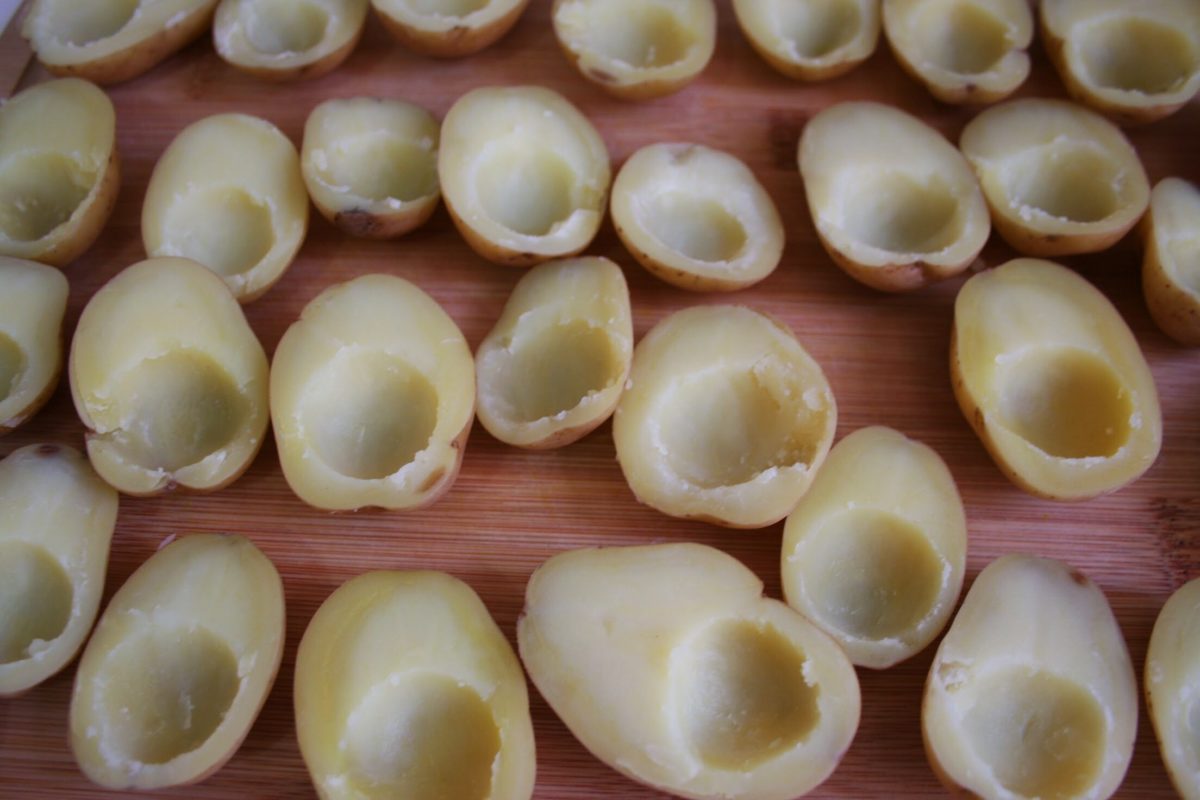 For the mixture, I wanted to find a texture that would mimic egg yolk. Plenty of people choose to use the scooped-out potatoes, but potatoes tend to get starchy and gummy as they’re processed in a food processor, so I wanted to go with something a bit fluffier. Navy beans were a perfect fit. I threw the navy beans in a food processor with some vegan mayo, vinegar, spices and a dash of turmeric for color, and the mixture looked and tasted exactly like egg yolk filling. 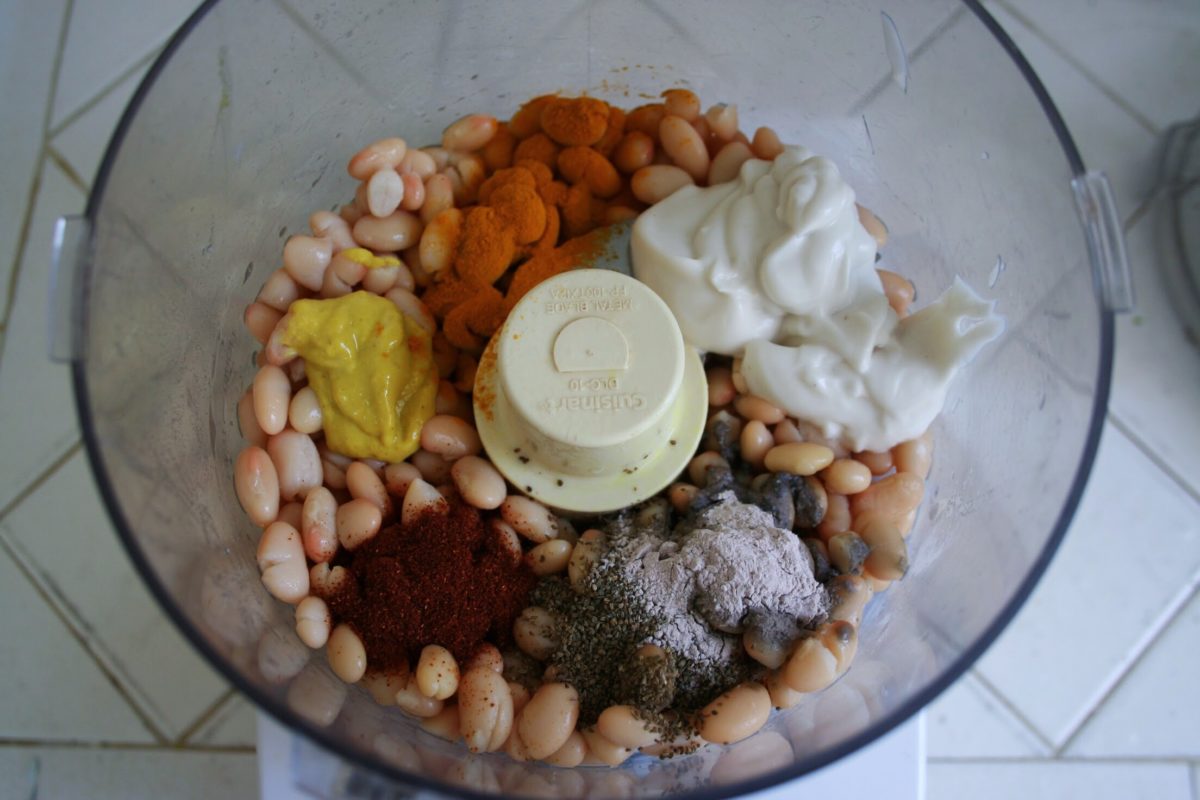 MORE: Everyone will love this vegan sweet potato rainbow salad with lime crema

OK, I’ll get off my soapbox now and get to the recipe. Here is our vegan-friendly recipe for the original deviled eggs.

MORE: See 6 of the best vegan recipes to try 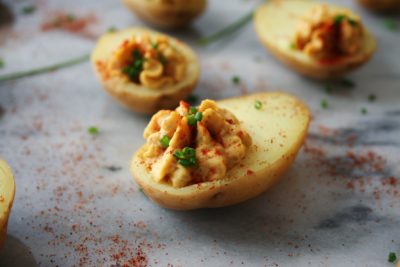