We taste tested 9 Easter candies & here’s what we thought 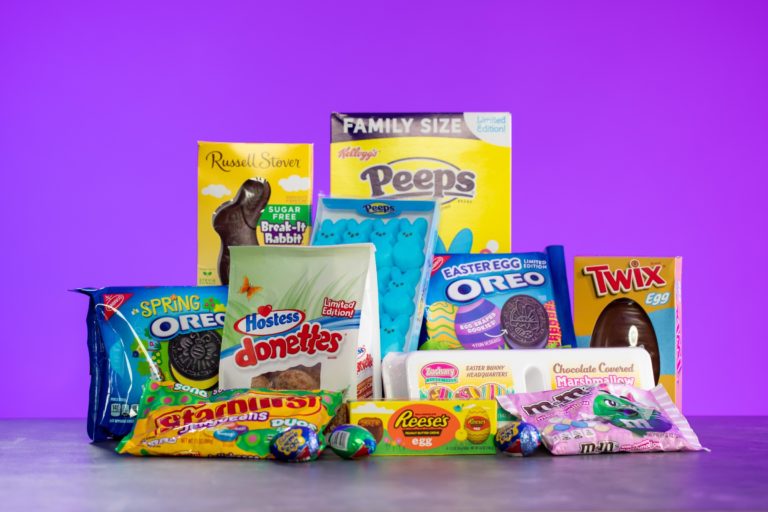 Kids these days. They just don’t realize how lucky they are. One case in point: Easter candy. When children, teens, young adults and chocolate-starved moms wander through today’s grocery stores at Easter time, they’re spoiled with so many options including sweet and sour, dark and milk, mini and supersized candy. But was it like that back in the day? That’d be a no.

Easter treats then and now

Until around 1980, most sweet Easter treats were less than spectacular. The big players were old-fashioned jelly beans (which came in gag-me flavors like clove, spearmint and black licorice), waxy chocolate formed into hollow bunnies and foil-covered eggs, and, in some areas, the original yellow Peeps.

Although you can still get those chocolate rabbits and odd-flavored jelly beans (check the dollar-store aisles), you can do a whole lot better with treats that don’t just look festive but also taste ridiculously good.

The one downside to having so many options? Much more difficult decisions. When you’re standing in the holiday aisle at the store, assessing the pastel explosion of calories that somehow symbolize a holy Christian holiday, you’re probably asking yourself, “What’s good? What’s gross? Which candies are so phenomenal that everyone will be begging for one more?”

Wonder no more. To help you out, we taste-tested the latest Easter goodies. We didn’t just stop at candy, either; we reviewed cookies, creamers and even cereal, too. Yes, it’s a tough job, but we gotta do what we gotta do.

So, without further ado, here’s how this year’s newest Easter offerings fared with the brave members of TG & Co. team.

Warning: Stomachs were hurt in the making of this video. We do not recommend consuming this much sugar in one sitting. Proceed at your own risk.

The verdict: Yes, please! (Kristopher — our executive producer — doesn’t like peanut butter, so he’s disqualified. We love you, man, but that is crazy talk.)

Regular Reese’s cups have a tried-and-true balance of peanut butter and chocolate. Compared to those, these special-edition cream eggs (and their non-cream counterparts) are pretty epic.

Lauren, our content editor, suggests hitting the stores the day after Easter and seeing how many of these eggs you can score. Wrap ‘em up in a sealed plastic bag, and keep them in the fridge until Halloween rolls around. And just like that, your tricky treats will go down in history as being the best on the block.

The verdict: Good, but not as good as it used to seem. As Jessica, our content manager, said, they taste like milk chocolate and sugar…because that’s pretty much what they are.

Despite its simplicity (or because of it), this classic candy egg — a chocolate shell with gooey white and yellow fondant inside — is still hugely popular with Easter shoppers.

Our testers found that, while the combo tastes heavenly when you’re a kid, it doesn’t play as well for adults. (Admittedly, many adults might have slightly dulled their taste buds over the years with grown-up desserts… like wine.)

FYI: The blue versions hit the scene in 1998. That means they’re legal drinking age now, so if you see one garnishing the edge of an Easter margarita, it’s cool.

The verdict: Yes. As it says on the bottle: “Cream has never tasted so cute.”

We can’t say everyone will be charmed by this marshmallow-flavored stuff, but we thought it was pretty good in a cup of joe. It’s also better than trying to dissolve an actual Peep into your coffee, which ain’t pretty. Don’t ask us how we know.

FYI: Chugging the creamer straight out of the bottle is not recommended for anything other than a massive sugar rush.

The verdict: Yes. And no.

This candy was Jessica’s favorite, but not everyone was sold on the it’s-supposed-to-be-marshmallow flavor. What got universal praise? The color scheme of the candy shells on these special-edition M&Ms.

The verdict: These things smelled amazing and tasted OK.

Percentage of actual carrot in these tiny donuts? Zero. Wait, what?

Turns out, it’s all about the spices, and the carrot part is just honorary. In fact, the folks over at Hostess could pretty much market these in the fall — call them “pumpkin spice donuts” — and everyone would buy them, inhale deeply, then gorge themselves.

The verdict: Just regular Oreos, only slightly more colorful in an egg shape. If regular Oreos are your jam, we have a winner.

We found them in two colors: purple and yellow. (The yellow looked a lot like cooked egg yolk, but, fortunately, tasted like sugar and happiness.)

The verdict: These chocolate marshmallow eggs tasted pretty much as expected — real chocolate on the outside of marshmallow — but the team was pretty marshmallowed-out by that point.

Delivered in an authentic-looking styrofoam egg carton, this one wins on the packaging front, as long as the recipient is old enough to read that you’re not giving them real chicken eggs. The downfall of the clever package: The candies inside were too small to fill the holes, making the eggs look kind of sad.

The verdict: Like regular cereal, with little Peeps-shaped marshmallows — a fun take on Lucky Charms.

If you’re looking get your kids’ snacktime hopping with a little seasonal fun, bowlsful of Peeps cereal will make you look like the cool mom. (Just don’t think for a sugar-coma minute that it’s a healthy breakfast.)

If you want to pick up a box for your own solo celebration, do it — we won’t tell. In fact, we’ll be cheering you on.