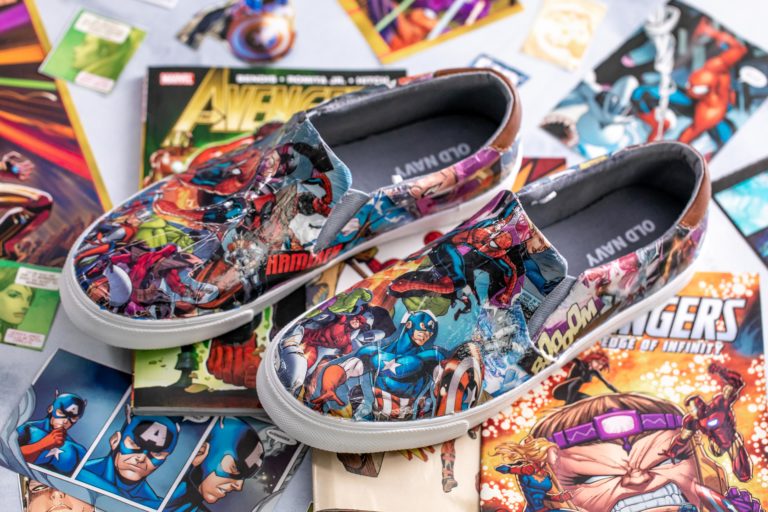 Luckily, society has come a long way in embracing nerd culture. In fact, nerd culture is quite trendy. So trendy, in fact, that rocking some Marvel comic book sneakers would now make you the cool kid on the playground instead of the outcast. Go, progress! (Baby steps, people.)

But just because us millennials are no longer hanging out on the playground (it’s all about moderation), doesn’t mean we can’t enjoy a good pair of Marvel comic book sneakers. In fact, they’re not just enjoyable, they’re downright damn exciting. And the best part of all, you can make them yourself.

We recommend making these as a gift or as a family activity. But, fair warning, if you do plan on giving this DIY project as a gift, make sure to make a pair for yourself, too. Otherwise, you might not end up giving said gift, and you’ll end up instead rocking this custom footwear yourself at the party.

A very important note about these shoes: They don’t have to be Marvel-themed. We chose Marvel comic books in honor of the Avengers: Endgame release, but if you’re more of a DC kind of guy or girl, that works just as well.

If superheroes aren’t your thing, that’s also cool. I’ve already plotted out not one but two pairs for myself. I’m definitely making a Lisa Frank pair. And a Star Wars pair. Oh, and a Harry Potter pair. OK, make that three pairs of shoes for me!

There are tons of pop culture trends that would make great shoes: Game of Thrones, Stranger Things, Pokémon, Rick and Morty. If you love it, you can put it on a shoe.

The trick is really just getting the right paper. You want the thinnest paper possible. Usually when you Mod Podge, tissue paper is ideal. We used comic book pages for our shoes, and even that paper was a bit too thick. It worked, though, and I would recommend using comic books. But that’s the thickest paper that would work easily.

If you are in love with an image that’s on thicker paper, there’s an easy solution: Simply photocopy the image onto thinner paper. That way, you save the original image and you make cool shoes.

To start this craft, use painters tape to tape off any parts of the shoe you don’t want to cover with Mod Podge. Take your time. The more exact you get the tape, the easier it will be to remove once you’re done. 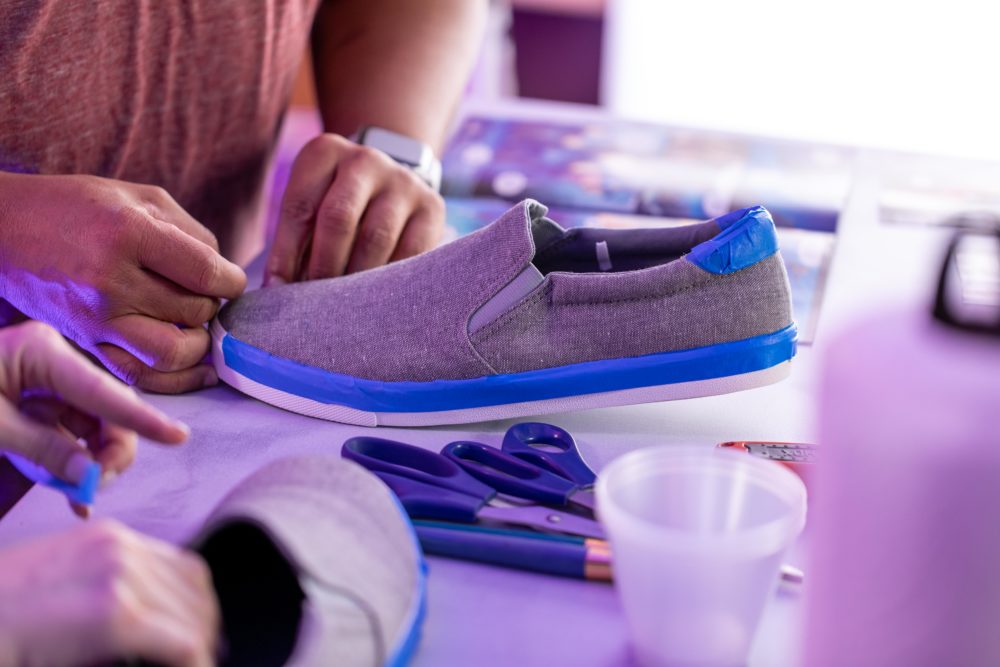 Decide the color scheme or theme. When deciding on the look of your Marvel comic book shoes, spend some time plotting which images you want where before you start cutting the comic book. I plotted the basic images I wanted for both shoes at the same time; that way, they had an even feel.

For the first pair of shoes, I focused on Spider-Man, so my shoes had a gray, red and blue feel overall. For the second pair of shoes we made (see the video below), executive producer Kristopher Juniel and I decided to focus on The Infinity Gauntlet, so the end result was bright and colorful.

Make sure to look at both the back and the front of the comic book pages before you start cutting. The last thing you want to do is cut out an image only to realize there was an even better visual on the other side.

Once you’ve plotted out the look and feel of your shoes, cut the images.

Cutting images to fit the corners and curves of the shoe is the hardest part. To start, I placed the image where I wanted it (without any Mod Podge — that’s the next step) and used my fingernail to emboss the line where I needed to cut the image. It’s not a perfect science, but it worked the best for me.

I always recommend cutting less and then gradually cutting more and more until the image fits correctly. You can always cut more, but adding back to an image where you need more coverage is not fun. And, trust me, it’s a real disappointment when you cut too much and can no longer use an image you love. 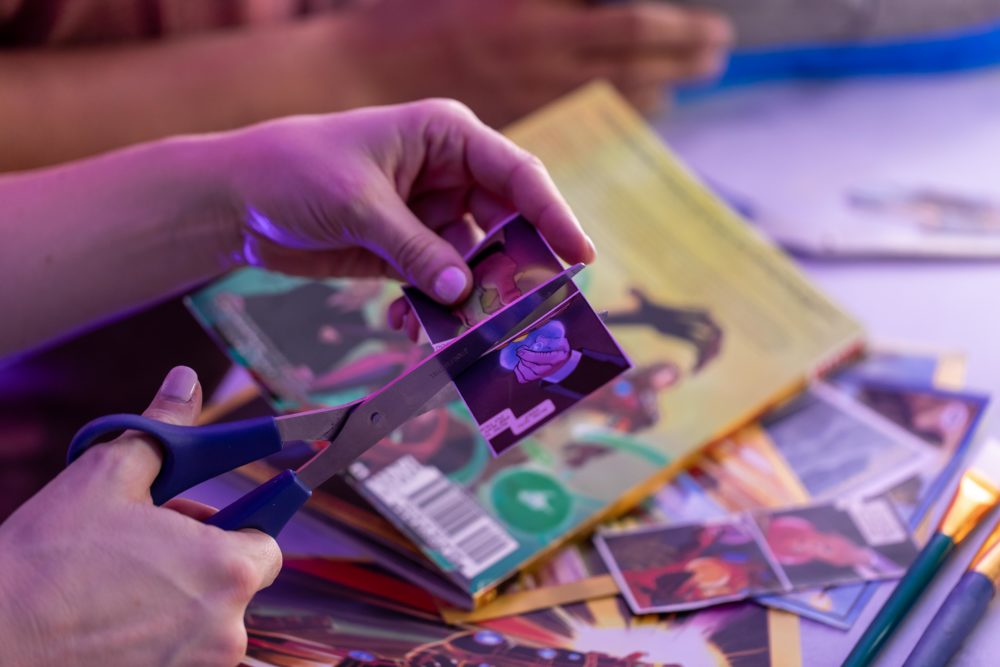 Now you’re ready to Mod Podge. I recommend starting at the back of the shoe and working your way to the front.

Continue adding Mod Podge and images around the shoe. As you go, you might notice the edges of the images curling back into a straight line as they dry. Work your paintbrush around the edges as the images dry to ensure they are flat and smooth against the shoe. Add more Mod Podge, as needed, to secure the image.

Note: My Marvel shoes did end up having a few wrinkles both times I did this craft. It’s not a big deal and you won’t even really see them once the shoes are dried and covered with varnish. Just make sure they’re as flat as possible. 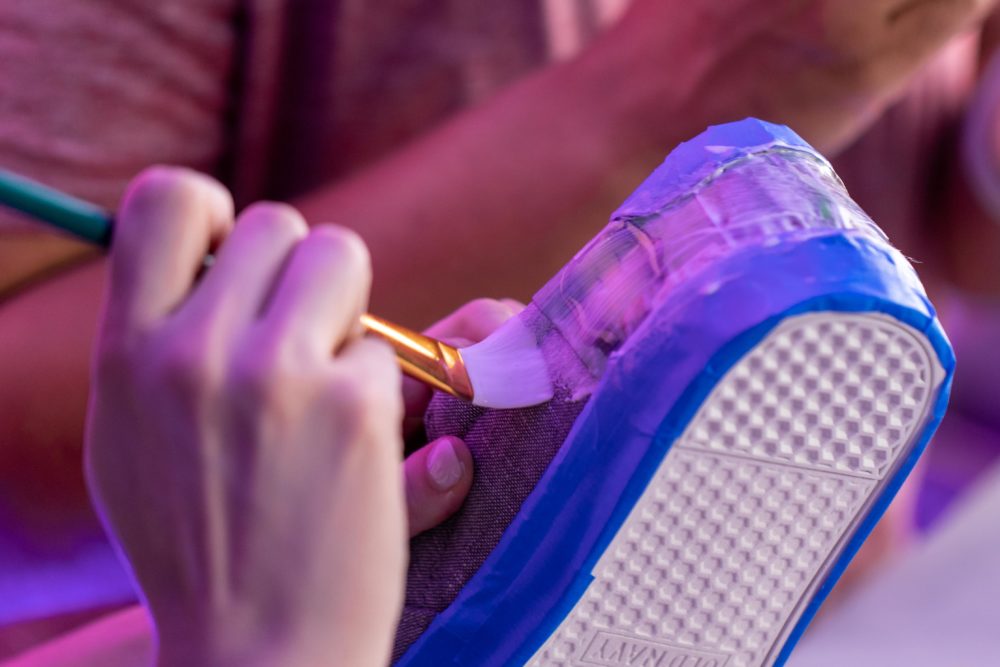 Once you’ve covered the shoe with images and Mod Podge, allow them to dry for 3-4 hours. After that time, add another thin layer of Mod Podge around the entire shoe and allow the shoe to dry overnight.

Add a layer of clear gloss varnish on top of the images and dried Mod Podge. Dry overnight again. 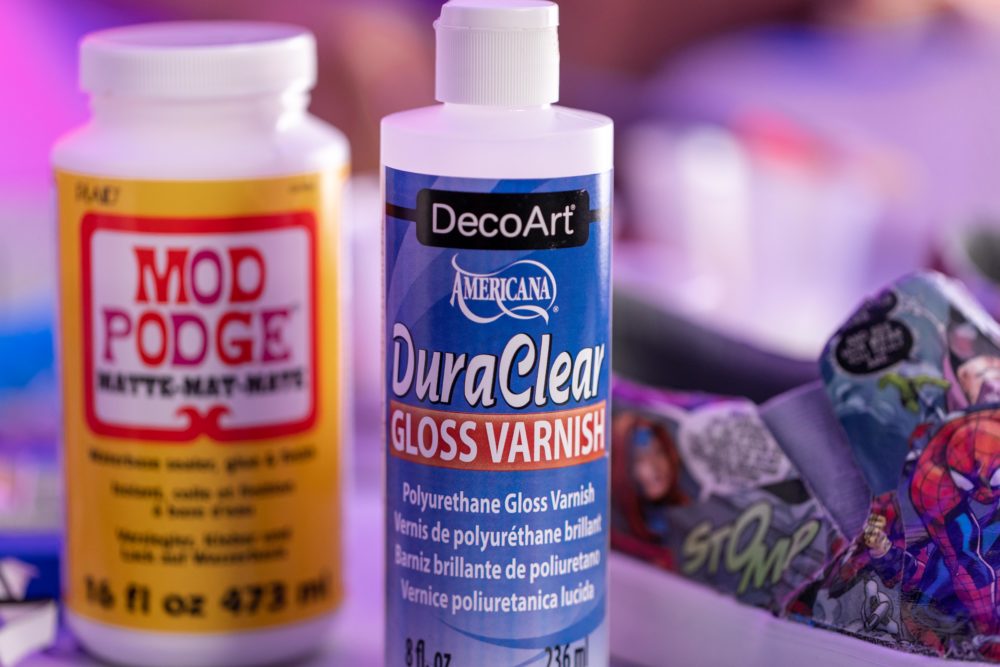 MORE: How to customize & spruce up your basic jean jacket

For the final step, remove the painters tape from the shoe. This can get tricky, as the Mod Podge and varnish might have overlapped onto the tape. I recommend using an X-Acto knife to carefully cut the tape away from the images. You can also use your fingernail to pinch down on the edges as you remove the tape.

Once all the tape is removed, you’re ready to rock your new shoes! Prepare for compliments and a lot of questions, like, “What?! Where did you get those?!” 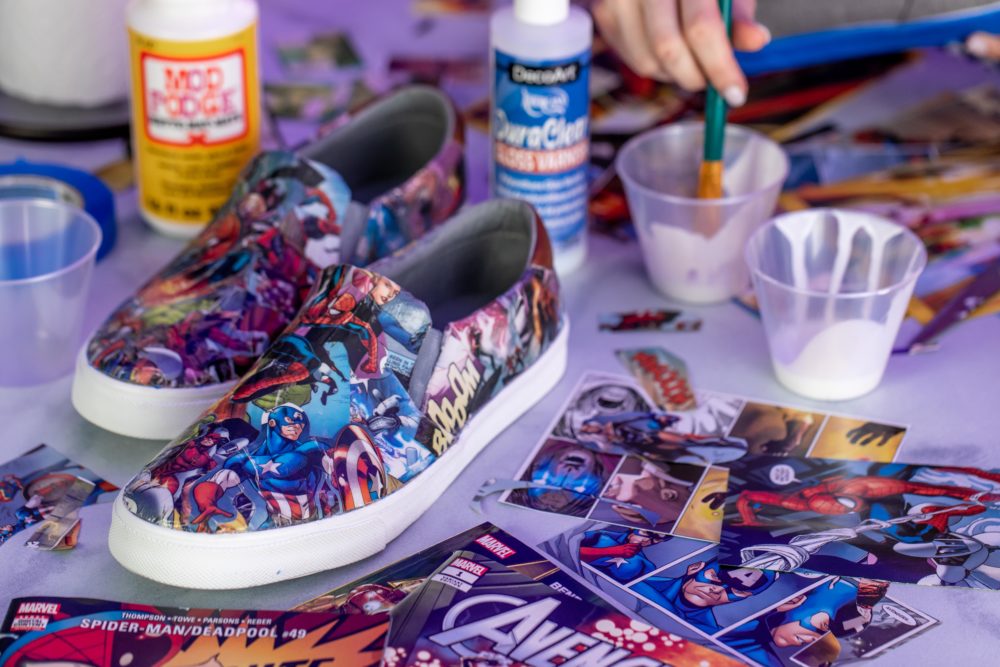 Share your DIY Marvel shoes with us by tagging @HomeOftheHolidays and #Holidays365! We can’t wait to see you rock them. POW!