Dinner and a movie: ‘Miracle on 34th Street’ 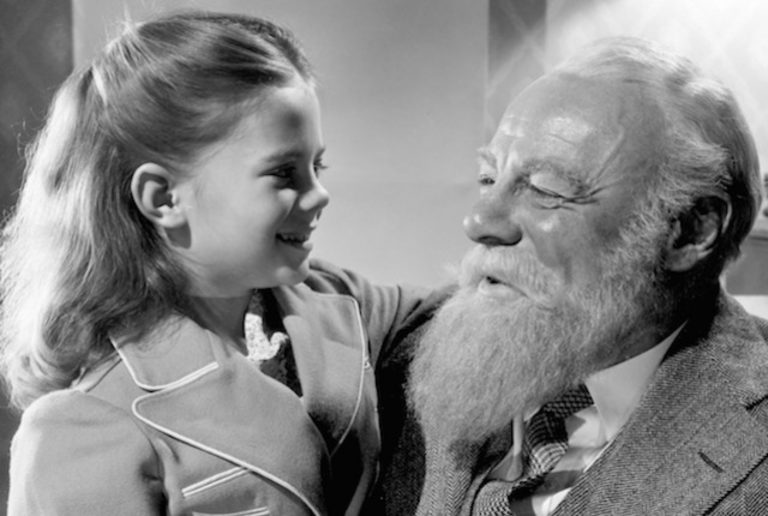 As the holiday season approaches, it’s time to dust off one of the greatest Christmas classics of all time: the original Miracle on 34th Street.

Released in 1947 and starring Maureen O’Hara as a jaded, divorced woman who doesn’t teach her child (a young Natalie Wood) about the magic of Santa Claus, this holiday flick begins on Thanksgiving Day and wraps on Christmas morning — all while teaching us about the true magic of the holidays.

Why is this such a good pick to plan a themed dinner around?

Because the movie doesn’t just celebrate Saint Nick, it also celebrates the food and fun that takes place between Turkey Day and Christmas in the magical setting of post-World War II New York City.

We’ve seen this movie a thousand times, and it never fails to affect us. Our hearts still beat a little bit harder when the mailmen march into the courtroom with huge bags of letters slung over their shoulders.

The obvious costume for the big night is a red trimmed velvet suit and a robust white beard, even though you’ll have to admit to being an impersonator.

But it would also be fun to have dinner guests show up in vintage duds from the late ‘40s. That could include circle skirts or pencil skirts for women (along with boat neck shirts, bullet bras and up-dos), and slim-fitting suits and hats for the men.

Get your Miracle on 34th Street on

Before you can enjoy your magical holiday menu, you have to get the movie ready:

Dinner and a movie: Your Miracle on 34th Street menu

One of the most famous scenes in the movie is not the moment that the Post Office saves the day, but the moment that Santa Claus speaks Dutch to a little orphan who is just positive that he’s the real deal.

You can pay homage to that tear-jerking scene by opening your dinner party with Recipe Girl’s Dutch oven bread — perfect for snacking on with a drink before dinner is served.

For a movie that straddles Thanksgiving and Christmas, you want an entrée that is filled with holiday flair but won’t upstage the actual big days. We recommend a roasted pork tenderloin stuffed with dried fruit, which is festive and seasonal, yet also a little different.

Bonus? It’s surprisingly fast and easy for something that comes out looking fancy and tasting delicious.

Mid-century America was all about green bean casserole, so why not have this period dish served while you watch your 1940s classic?

We like this recipe because it ditches the fast-and-easy aspects of the dish for homemade options that take a little longer but make the final dish taste absolutely fantastic. It also reminds us of the holidays and, hey, it goes great with pork.

The time period of the movie was famous for its disgusting — we mean creative — molded salads, such as this olive Jell-O with shrimp frosting number.

But you can have all the fun of a molded salad and have it taste good, too.

Just skip the mold and opt for this equally unique and tasty cranberry pecan fluff salad, which looks bright and festive in a decorative bowl. It still makes your dinner party fun and vintage, without the shock of too much weirdness.

During one hilarious scene, the head of Macy’s toy department decides he will try and convince his wife to let Kris Kringle stay at their home through the holidays.

After a moment of thought, he says, “We always have martinis before dinner. I’ll make them double-strength tonight.”

Martinis are a classic drink of the time period, especially in New York, and pumpkin-flavored martinis will add even more holiday cheer to your party. It will feel delightfully nostalgic to serve them to guests dressed in their circle skirts and ties.