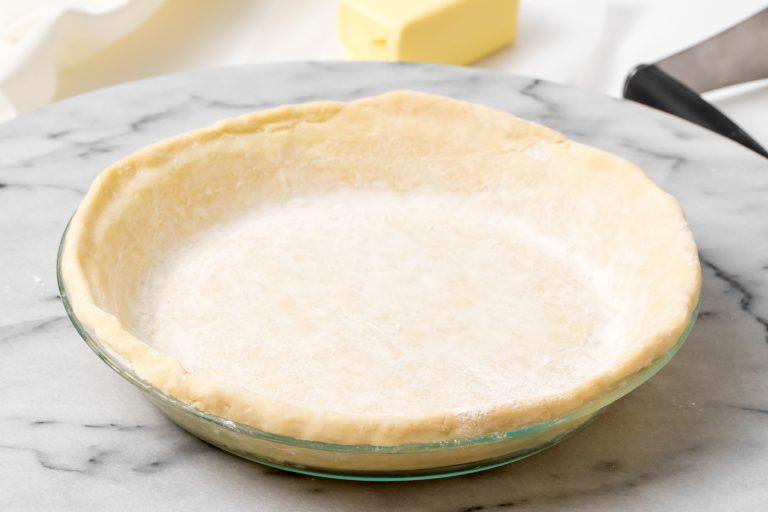 Love baking pies but in a quandary looking for the best pie crust recipe? Search no more! Our traditional pie dough master recipe — adapted from Art of the Pie — is a fast, fabulous, fail-proof pie dough that transforms into an unforgettable flaky, golden crust.

What makes this pie dough recipe so special? We use rendered leaf lard — the highest grade of lard. Though this secret pie dough ingredient isn’t readily available in the baking aisle, you can track it down at your local butcher or meat counter. You can also make your own (see baker’s note below). The moisture content and mild flavor of leaf lard translates into flavorful, flaky pie crusts that make pie-ophiles giddy with pie-eating pleasure. Butter is good, but a butter and leaf lard combination is the best!

Another reason you’ll love this master pie dough recipe is the reliable yet streamlined dough-making technique. Simply toss the ingredients into a food processor and pulse your way to a perfectly mixed dough. The sharp blades of the food processor expertly cut through the butter and lard, quickly cutting the fat into the flour, then quickly blending in the water. The only hands-on work you have to do is gather the mixture up into a dough and divide it in half before chilling in the refrigerator. The food processor is key for easy-peasy pie dough-making.

Baking tip: You can also make this pie dough without a food processor. Simply cut cold lard and butter into the flour and salt mixture until it looks crumbly. Mix in ice water and bring the mixture into a dough. Knead a few times, divide in two, and refrigerate the dough until ready to use.

Recipe from Art of the Pie: A Practical Guide to Homemade Crusts, Fillings, and Life © 2016 by Kate McDermott. Reproduced by permission of Countryman Press.

A food processor makes this pie dough a quick and easy job. In the bowl of a food processor, combine flour, salt, butter and lard. Pulse 20 times to cut the fat into the dry ingredients. 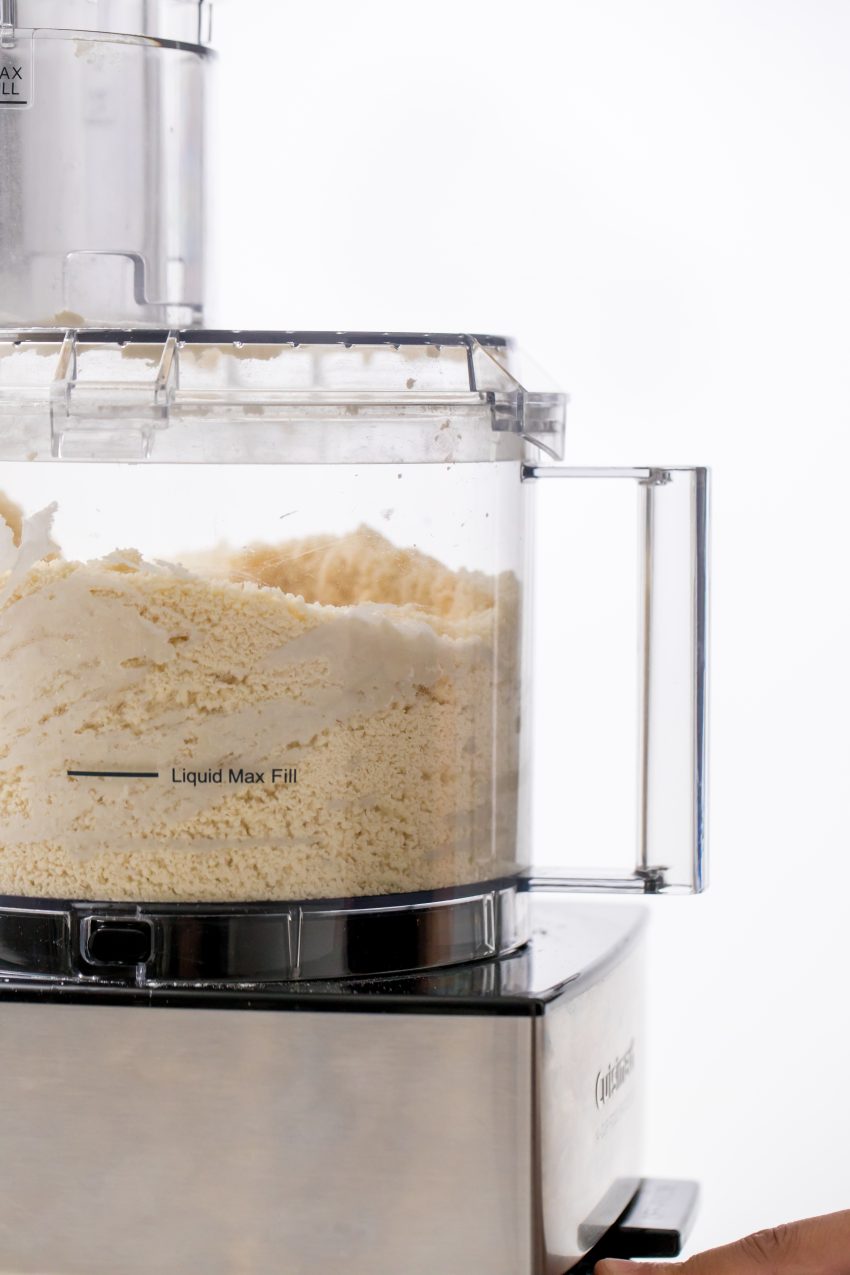 Ice-cold water keeps the fat cold as the pie dough ingredients come together. Sprinkle cold water over the flour mixture and pulse 15 times. Squeeze a handful of the dough to see if it holds together. If it doesn’t, add a bit more water and pulse a few times, then retest. 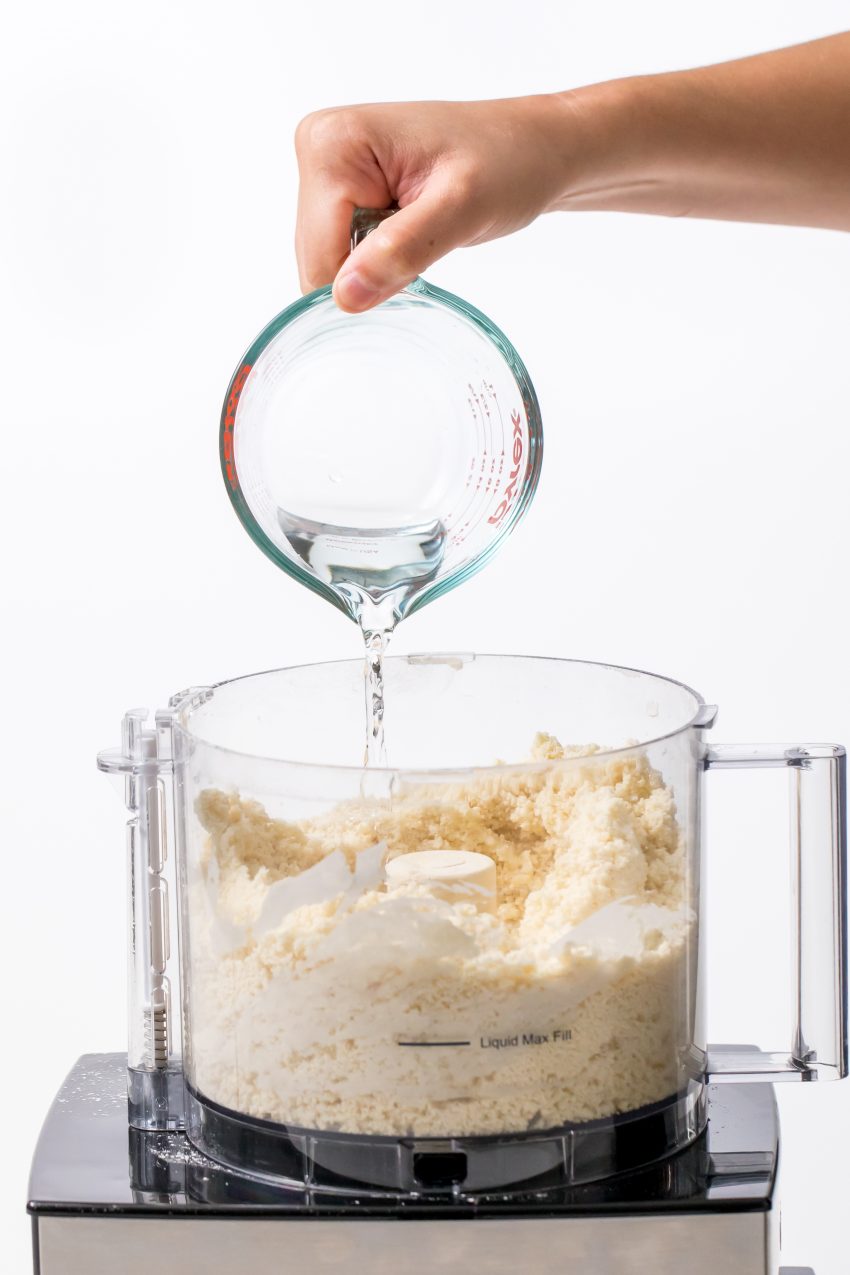 Divide the dough in half

Dump the dough into a bowl and use your hands to bring the dough together. Divide the dough into 2 equal portions. Shape each portion into a 5-inch disk. Wrap each disk in plastic wrap and refrigerate for 1 hour. 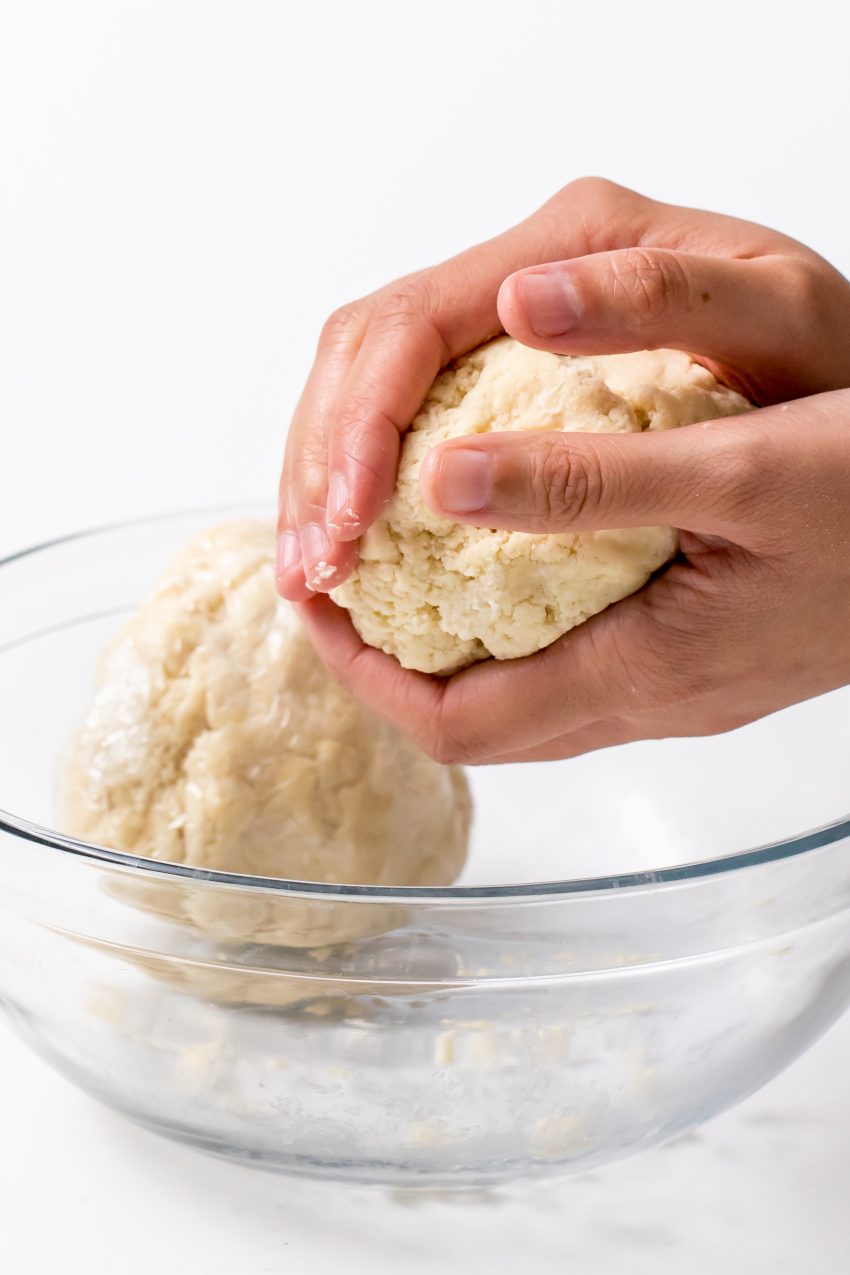 Roll out the dough

Set the dough on the countertop and allow it to warm up just until the dough is soft to the touch and is easy to roll out. Place 1 disk on a lightly floured pastry mat or board and remove the plastic wrap. Sprinkle the disk with flour and roll the dough from the center out in all directions. Avoid using a back and forth rolling motion. When the dough is 1 to 2 inches larger than the pie pan, brush off the extra flour. 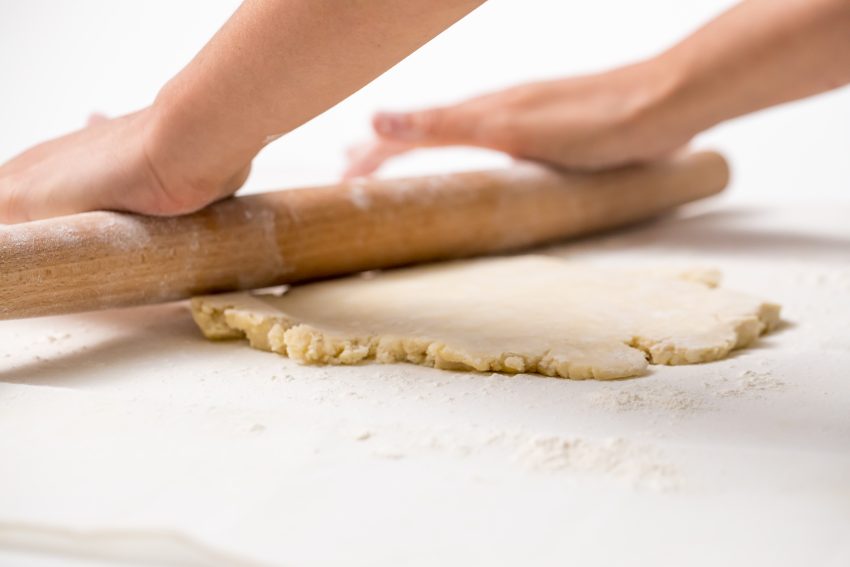 Fit the dough in the pie pan

Fold the dough in half and lay it in the pie pan, gently pushing it down to fit snugly in the pan. If it tears, repair the tear by adding a bit of water and flour and pressing over the area. Trim the overhang of the dough, leaving enough dough to crimp around the edge of the pie pan. 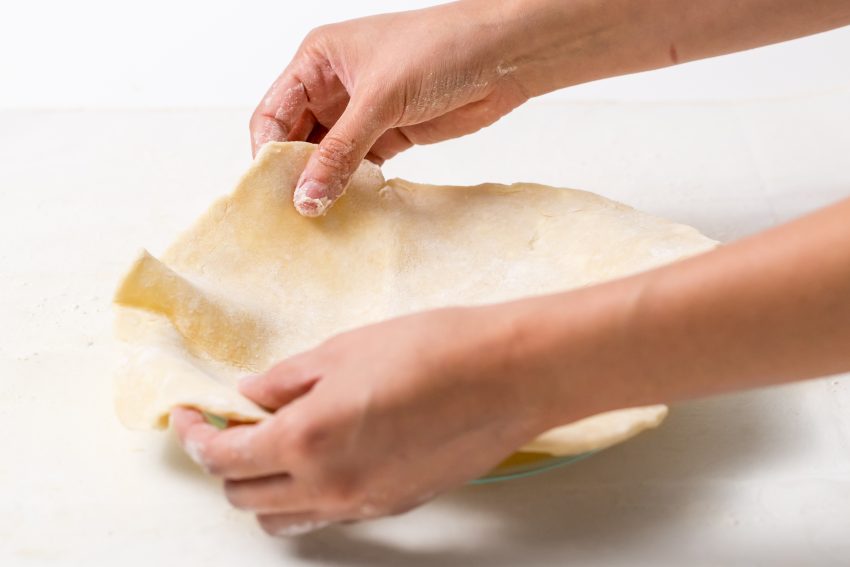 Fill and bake as directed

Fill the pie pan with your pie filling. If you’re making a double-crust pie, roll out the second dough and use it as a top crust. Set the dough over the filling, trim as necessary, and crimp the dough edges together. Bake your pie as directed. 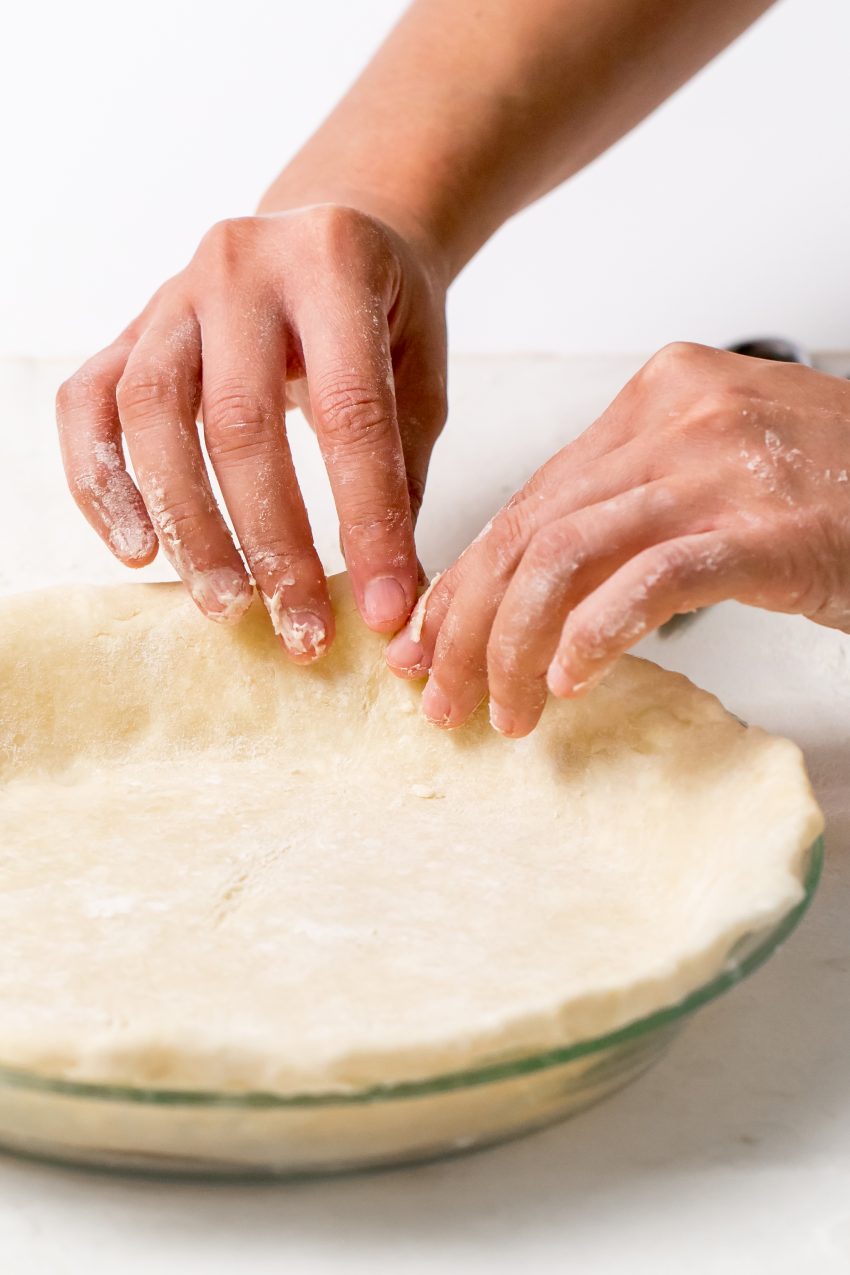 The perfect canvas for any pie you can dream up! 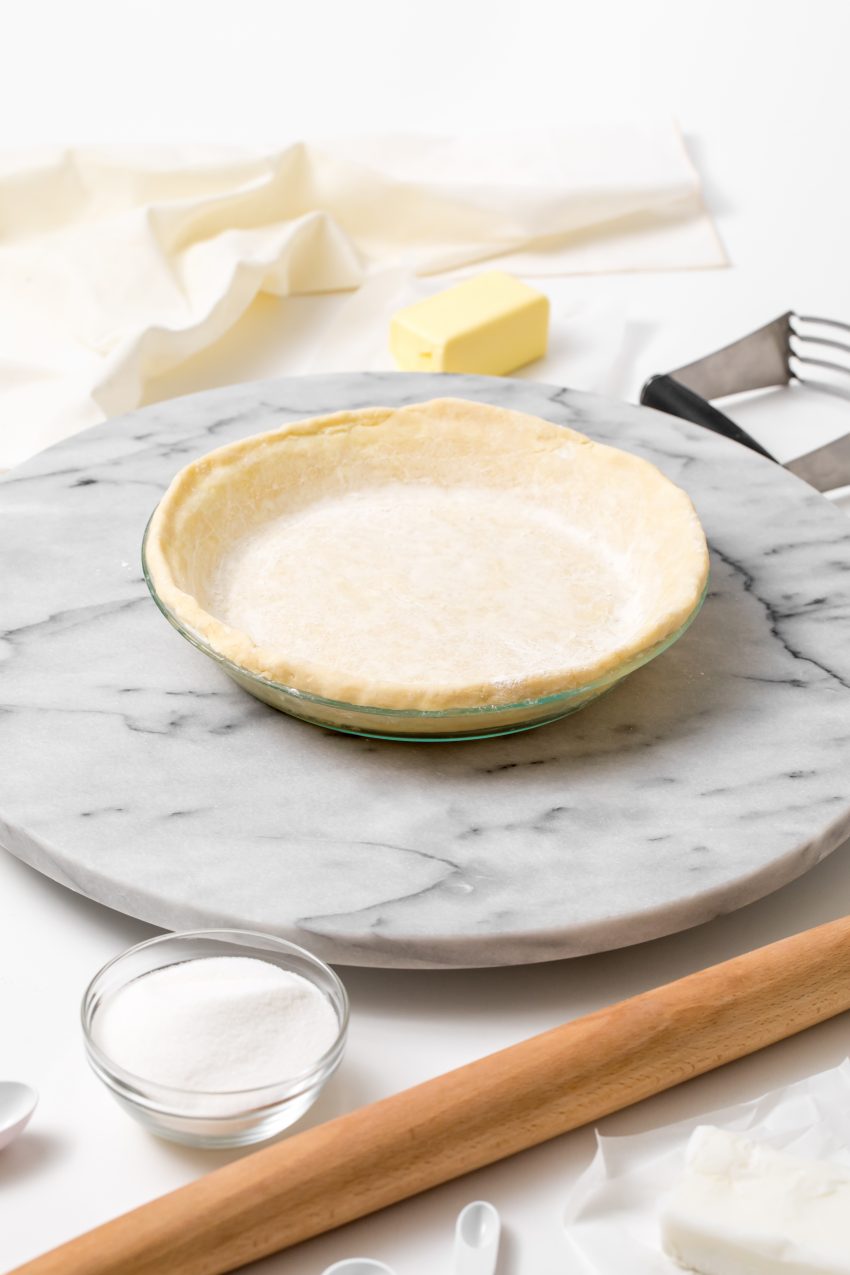 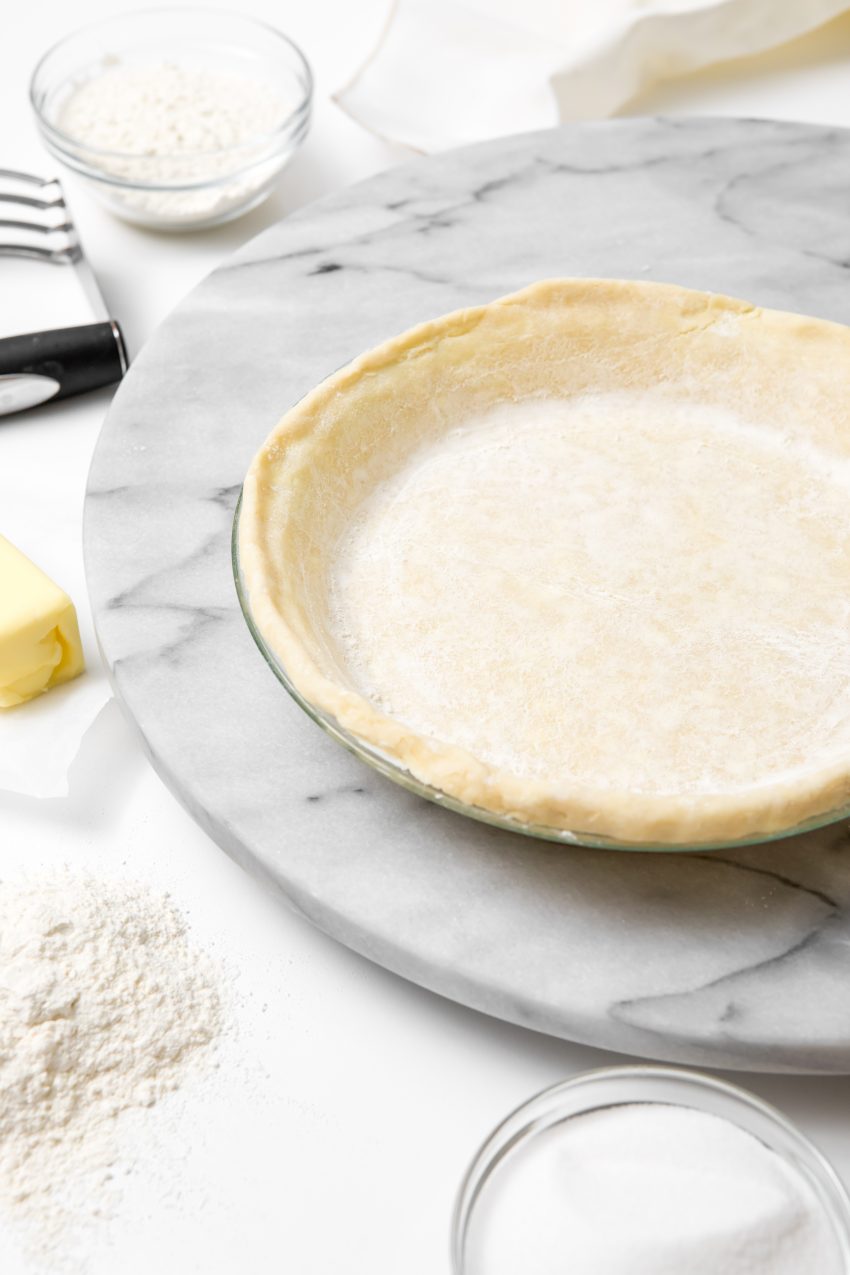 This pie crust recipe couldn’t be any easier! 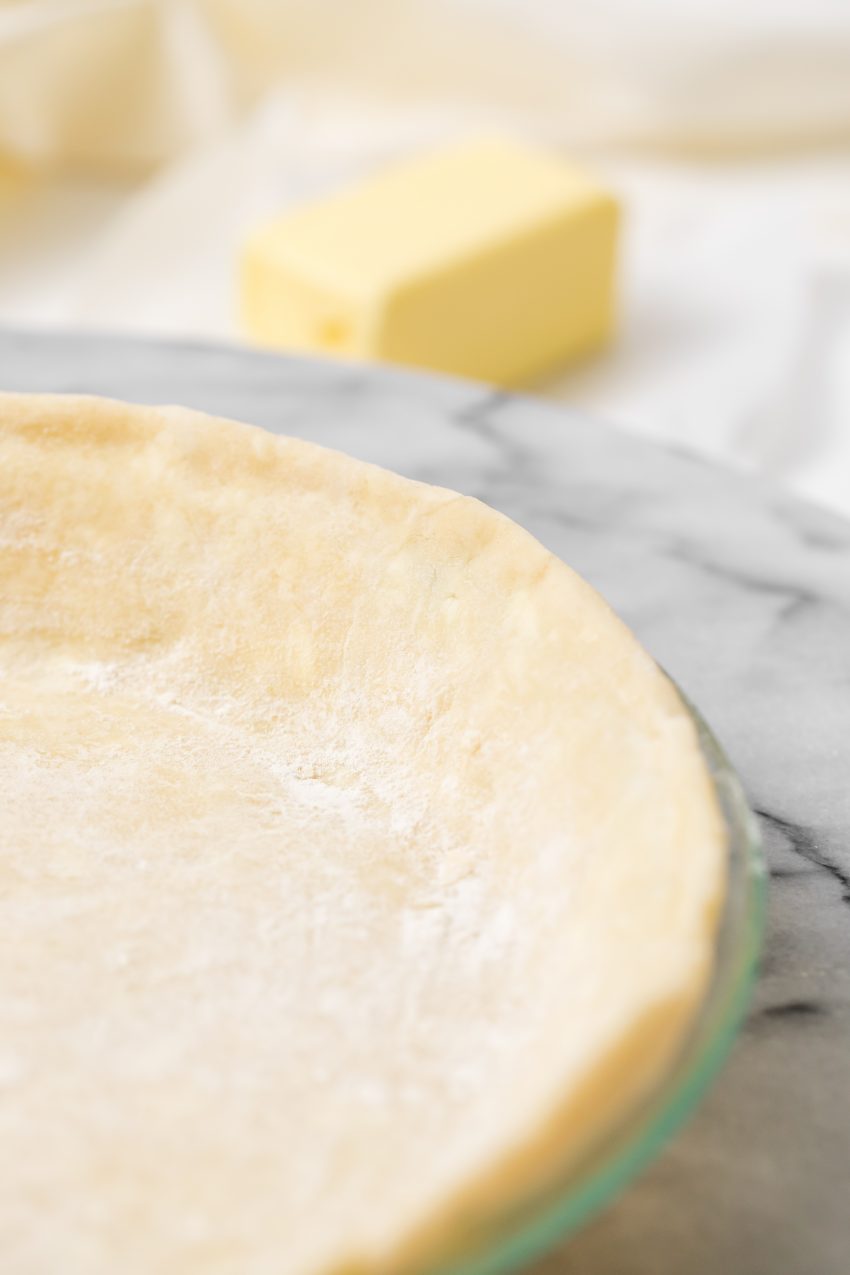 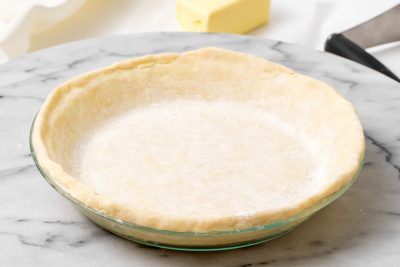 Baker’s note: Rendered leaf lard can be purchased from speciality butcher shops. If they only have unrendered, you can render it at home by placing cubed pieces (approximately 2 inches in diameter) in a shallow pan in the oven or electric skillet and cooking on low heat at 250F for several hours until it melts. Strain it through a cheesecloth and a strainer, and place it in a container in the refrigerator until it sets up. Divide and weigh the leaf lard into equal portions of 4 ounces each. Wrap and chill or freeze until ready to use. The lard will last 3 months in the freezer.

*14 tablespoons (7 ounces) of butter may be substituted for the leaf lard and butter combination. 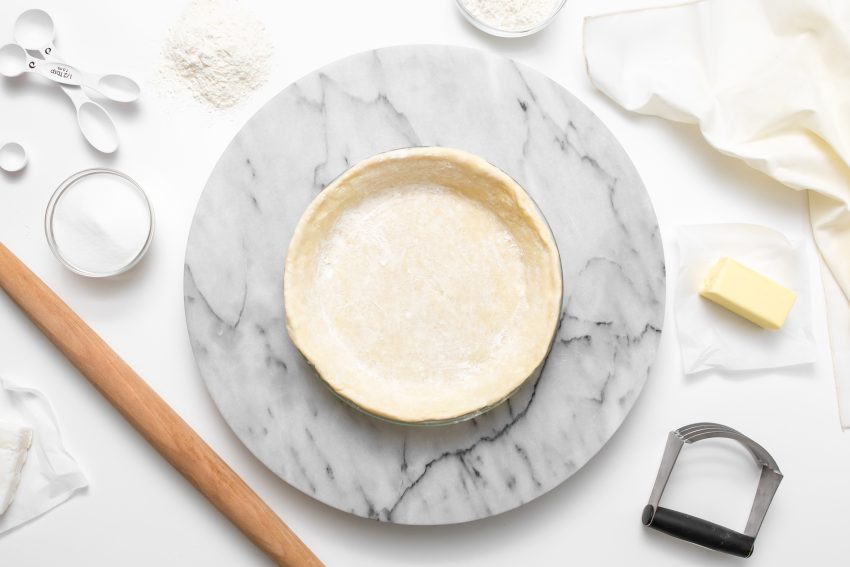