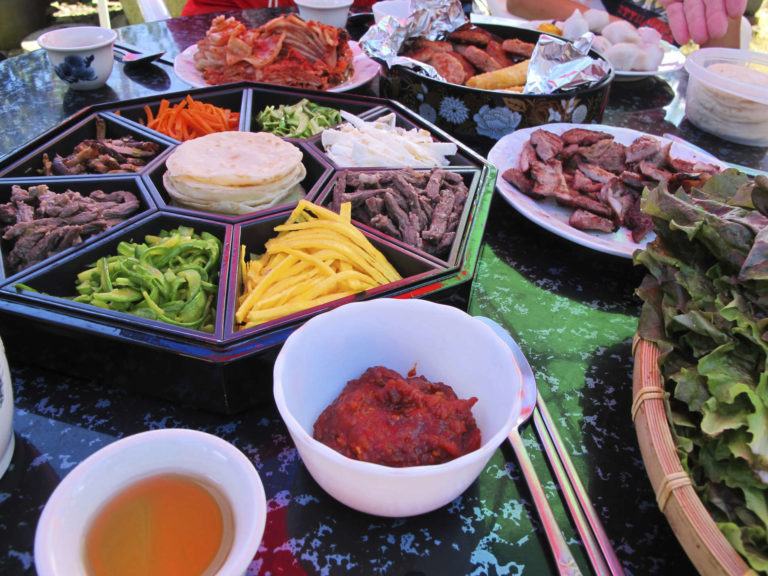 Soldiers stationed in the Republic of Korea may have noticed that around the Autumn Equinox, their Korean counterparts — Korean Augmentation to the US Army Soldiers — were nowhere to be seen. That’s because they were out celebrating one of their biggest holidays in Korea: Chuseok.

The word “Chuseok” means evening of fall. Chuseok is a major harvest festival, and a three-day holiday in Korea celebrated on the 15th day of the 8th month of the lunar calendar.

In Korea, crops such as grains and fruits grow around mid-September. That’s when the ancestors would start harvesting their crops. When finished harvesting, parents would call their grown children and their families to celebrate the year’s harvest and have a feast.

On the first day of the three-day holiday, people throughout the peninsula go to their ancestral hometown, mainly by car. This day is referred to as “hell day” because traffic is incredibly heavy. A trip that would normally take a couple of hours to drive can take up to 12 hours during this day.

“Luckily we had Family Day the Monday before the Chuseok holiday, otherwise it would have taken me a very long time to get to my hometown of Suwon,” said Ha.

Once families gather, they make a variety of foods such as japchae, bulgogi, and bibimbap. But songpyeon, which is a type of rice cake that can be eaten either hot or cold, is definitely a must during Chuseok. Families usually sit in a circle and make it together. Ingredients may include bean powder, sesame or sugar. Although songpyeon is normally crescent-shaped, the Chuseok holiday is a time when children can play with their food and shape it into different figures.

“Making traditional Korean food like songpyeon with my parents is my favorite part,” said Ha.

There are variety of folk games played on Chuseok to celebrate the coming of fall and rich harvest. Some people dress themselves in multi-colored traditional clothing and play music using Korean drums, Nongak, as they dance. Additional common folk games played are tug-of-war, archery and ssireum, or chicken fight. Folk games also vary from region to region. Gang-gang-sul-lae dance, which is performed under a full moon by women and children, is from southwestern coastal regions, while bullfighting traditionally takes place in the southern regions of Korea.

On the day of Chuseok, families get up early and set up the table for their ancestors. Much like American Thanksgiving, all kinds of food is placed on the table; the food is for the spirits of the ancestors because it is a belief that the ancestors guard the family’s fortune. Families bow toward their table two times to pay respect and wait for their spirits to accept the gifts. After that, families share the food. It is also a belief that eating the food after the ancestral spirits have accepted it will bring fortune and health to the family.

“On Chuseok, my relatives gathered at my house,” said Ha. “We gave thanks to my ancestors by a ceremony called Cha-re, which is an important ancestral rite.”

After breakfast, families visit the mountain where their ancestors’ tombs lie. One or two weeks prior to Chuseok, the males of the family mow the lawn around the tombs and clean the areas. They bring along harvested crops and alcohol to display in front of the tombs. The alcohol is slowly poured over the tomb if the owner of the tomb enjoyed drinking. After that, the family bows twice like they did indoors.

After bowing, everyone goes back home, enjoys lunch together, and then say their goodbyes. Some families go back to their houses, while others visit more relatives.

Chuseok is a time for Koreans to recharge their batteries so that they may return to their ordinary life full of energy.

“I was thankful for the long holiday spent with relatives,” said Ha.

This article first appeared on October 5, 2010 on the official homepage of the US Army.