Friendsgiving drinking games that will make your party lit 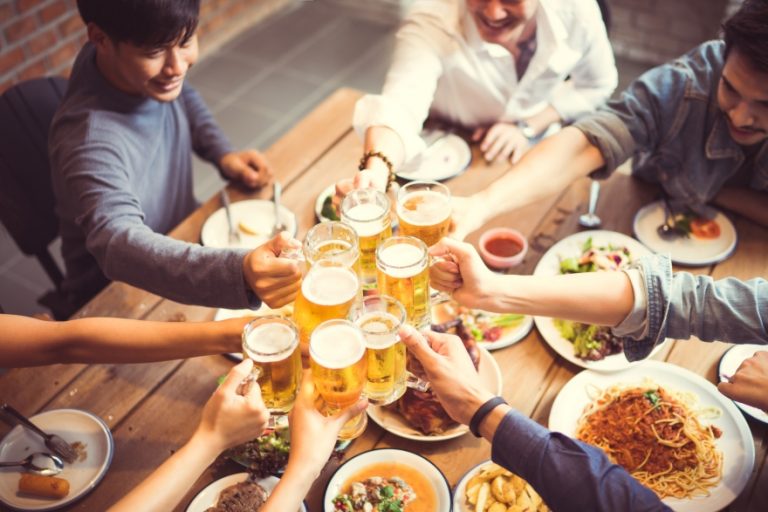 There are many things you can count on at Thanksgiving dinner with your fam: someone arguing over politics, your great-aunt asking you for the umpteenth time when you’re going to settle down, your little cousins following you everywhere but the bathroom. What you’re not likely to experience, though, is your parents breaking out the beer pong just before carving the turkey. No matter how much fun that would be.

On the other hand, drinking games may very well be Friendsgiving’s kindred spirit. While imbibing grown-up beverages undoubtedly happens at traditional Thanksgiving, it’s typically a defense mechanism to drown out the chaos. But at Friendsgiving, you’re drinking for fun (if you’re over 21).

The celebration centers on you and your besties blowing off some steam and being grateful for each other’s company.

When you’re in between courses — or need to give your digestive system a breather — the following drinking games will keep your group entertained. And, OK, a bit buzzy, too. Just remember to drink responsibly. ‘Tis an ideal night to be grateful for your DD or Uber driver, too.

If you’d like to keep things as simple and prop-free as possible, When Someone could be the game for you. The gist? Everyone takes a drink “when someone” does or says a pre-specified trigger. So, for example, when someone mentions tryptophan — which, c’mon, is a given. Buzzfeed came up with an entire list of prompts so the rest of us can be lazy and copy theirs and focus on, you know, getting basted.

But to tailor it to Friendsgiving, you could come up with your own arsenal of questions based on your besties’ likes, dislikes and conversational habits.

Calling all day drinkers! On Parade is perfect for Friendsgiving brunch. Since it’s unlikely your gang is going to start glugging booze at 9 a.m. ET, you can DVR and watch at a more acceptable drinking hour.

Essentially, the game is a lot like When Someone but specific to the time-honored tradition of the Macy’s Thanksgiving Day Parade. We recommend picking prompts from Cookies and Sangria’s version, which includes things like, “One sip if you see Nick Jonas and you have to deal with weird grown-up feelings (he’s of age, it’s fine).”

Based on the title of this game, we’re betting you can guess why it’s destined to be played on Friendsgiving. While creator Jimmy Fallon may not have intended it as a drinking game, we are here for it.

To make it work for a group, everyone can take turns asking questions about themselves — think favorite movie or biggest pet peeve. Everyone else in the group then tries to guess the correct answer. Anyone who isn’t on the same page (literally and figuratively) has to take a sip of their drink.

You and your friends can channel another famous, albeit fictional, group of friends during your holiday fete: “New Girl”’s Jess, Nick, Schmidt, Winston and Cece. All you have to do is borrow their notorious drinking game, True American. Which, let’s be real, somehow sounds Thanksgiving-y (pilgrims, Native Americans … the first true Americans?).

To play, guests must take turns navigating the tables, chairs and cushions around the room. This is necessary since, say it with us, the floor is lava! At the game’s center, there’s a table — aka the castle — topped with a bottle of liquor surrounded by beers. As the game progresses, these beers dwindle.

Winning entails making it to the center and drinking from the liquor bottle after all of the beers surrounding it are gone. But TBH, it’s even more complex than it sounds. See the full rules here.

5. Never Have I Ever

This one never gets old, does it? While you probably remember playing Never Have I Ever in a dimly lit dorm room in college, it’s far more fun when you have a bit more life under your belt. Those extra years’ worth of experiences can lead to little-known facts about your friends coming to light.

Whoever has done the thing in question must put a finger down and take a drink from their cup. The winner will be the final person remaining with any alcohol left.

“Friends” may not get credit for coining the term Friendsgiving, but most of us still give this iconic sitcom props for making a buddy version of Thanksgiving popular. So, what better way to honor Monica, Rachel and the rest of the crew than to play an actual “Friends” drinking game?

First of all, this means you get to cue up your favorite Thanksgiving episodes on Netflix. Second, you and your real-life besties can get plastered by taking a sip of your drinks every time Monica #humblebrags about the dinner she made or Joey says “How you doin’?” Get the full rundown here.

Operation gives new meaning to getting a buzz. What we love about turning this classic board game into a drinking game is that it’ll make you and your crew forget about adulting for a minute. We say yes to feeling like kids again!

The rules are practically self-explanatory — every time you take an unsuccessful shot at removing poor Cavity Sam’s charley horse or extracting his broken heart, you must take a shot. Whoever is the last to have alcohol left in their cup wins. Word of warning, though: If you thought you were bad at this game sober, wait ‘til you play it drunk.

Fans of “Whose Line Is It Anyway?” should recognize this LOL-inducing game. Of course, it doesn’t involve drinking on TV, but we fixed that. After all, what are friends(givings) for? Here’s the sitch: Two people are given a scene or circumstance, like “you just walked into a library.” The two people in play have to go back and forth trading vaguely sexual-sounding remarks that end in “if you know what I mean.”

This video will help you get the hang of it. Anyway, whoever comes up short (if you know what I mean, haha) has to drink. The same principle as many other games applies — the last person with booze in their cup wins.