Tiffani Thiessen pulls up a chair and talks Christmas with us 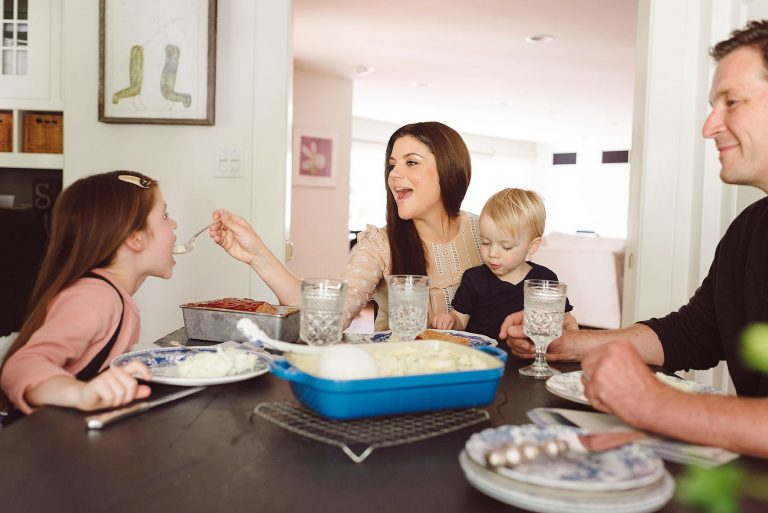 Actress Tiffani Thiessen knows the perfect recipe for holiday success… and it isn’t her Mom’s cream cheese pie. Although to be clear, that’s definitely on the menu.

But Thiessen can count the ingredients she can’t do without this time of year on one hand: friends, family, home and kindness. It’s precisely those sorts of things fans of Thiessen’s Cooking Channel series, Dinner at Tiffani’s, have come to expect the star to whip up in her Southern California kitchen.

When the world first fell in love with Thiessen, we knew her by another name altogether: Kelli Kapowski. It was the ‘90s, Saved By the Bell was at the height of its popularity, and Thiessen played the quintessential teen dream.

Today, she continues to endear herself to those of us who’ve been following along since her days at Bayside High. She’s charming a new generation with her role as a mother of her own teens in the popular Netflix series Alexa & Katie. She’s doling out advice on everything from party planning to DIY crafts on her lifestyle blog. And the busy working mother-of-two just released her first cookbook entitled: Pull Up a Chair: Recipes from My Family to Yours.

You could say her plate is full, in every sense of the expression. Still, the sweet-as-her-signature-pie star carved out a few minutes to fill us in on how she really feels about Elf on the Shelf, her family’s gifting philosophy and creating her cookbook in our Q&A below.

Thanksgiving & Co: What is your favorite thing about the holiday season?

Tiffani Thiessen: Oh gosh, I think to me holidays mean slowing down, spending time at home and not running around the city or going crazy (laughs). It’s really just about family, you know?

TG: Do y’all have any holiday traditions that have carried over from your childhood?

TT: We were always that family that would definitely do a big dinner, so those types of things for Thanksgiving and for Christmas have always stayed the same.

Now that I have my own family, it’s changed a little bit because my in-laws are all in Texas. So, we tend to split our holidays back and forth. We’ll spend Christmas here, and then we’ll end up going to Houston afterward if it’s our year to go there, or they’ll come to us.

TG: Are your kids still at the age where they get caught up in the magic of the season?

TT: It’s exciting because my daughter [Harper, age 8] now is older. And of course she’s still excited about the holidays, but the Santa thing has kind of passed — which is a little sad too, you know.

But my youngest — my son, Holt, who is three — is all into it. [Harper] is kind of in on the magic of it all, and she likes to be in the know. It’s really sweet. So, it’s gonna be fun this year to see the new dynamic between the two of them.

TG: Kids today have so many different types of holiday gimmicks, like Elf on the Shelf. Have you taken on any of these new traditions since having kids?

TT: We’ve started Elf on the Shelf with Harper, and it is work! (laughs) Like, I’m not sure I love it. It’s a lot of work to remember every night, and some people get real into — making it crazy with these elves and what they’re doing and making messes in places.

It’s an art form. I hand it to some of these parents who do it, man. They go all out.

TG: So, Elf on the Shelf fails aside, do you have any other sort of traditions, like a gift exchange on Christmas Eve or Christmas Day?

TT: We usually do Christmas morning with just us. Then my family is all here in Southern California, so they’ll usually come over later. We’ll have our Christmas dinner, we’ll have our exchanges with the grandparents and the kids, and then we do the whole White Elephant gifts.

The kids get such a kick out of watching us do that whole game of gifting! I have more fun watching them watch us do that than actually getting gifts.

TG: It’s so tricky as a parent because we do live in a consumerist culture. When it comes to gifts for your kids, how much is too much?

I almost feel like when there is too much they don’t even play with it! They don’t even know it’s there because there’s stuff on top of it, and they’re outside playing in the grass and riding around on their bikes anyway.

We really try not to do too much, knowing that grandparents will be giving things and cousins and all that. They do fine (laughs).

TG: Did you ever get a gift growing up that just was so memorable it still sticks in your mind?

TT: Oh, my dollhouse, for sure. Which I still have! A couple of years ago when Harper was five, I re-vamped it for Christmas… put new wallpaper in it and all. The funny thing is my daughter is not a big doll-playing girl and never took an interest, so it’s still sitting there in my attic. I think my son actually played with it more than she did.

TG: What are you most grateful for this holiday season?

TG: Well, one thing you’re undoubtedly grateful for and excited about is this cookbook! What was the process like creating it?

TT: It was a hard process. Everyone says putting a book together is not an easy task, and it definitely is not. I make the joke all the time saying that it was like birthing a child with four hard corners. But at the same time, what a task that I completed! It almost felt like having a real child. I literally got so teary-eyed when it first arrived.

TG: What made you want to write a cookbook?

TT: It was for many reasons. People kept asking me, “Why haven’t you done a book?” So, it seemed like, “Why not?” At the other aspect of it on a more selfish, kind of personal level, it’s one of those things — some of these recipes have been in my family for a long time, and being that I love to cook so much and entertain — where it became almost a book of memories, really, that I could pass down to my kids.

I still look at it and think how amazing it is that my kids are going to get to have this for the rest of their lives: these pictures, and these memories and the stories that come along with the recipes. It’s just all of that. I love that I get to have that for them.

TG: You clearly know your way around a kitchen. What are your must-have holiday recipes every year?

TT: Well, every year I try to do something different. Tradition is lovely and there are certain things we don’t change, but every year I’m always asking, “Hey, can I do a different stuffing this year?” And they’re like, “Absolutely not, you’re not allowed to do a different stuffing. You’re only allowed to do the one you’ve been doing for so many years,” and I’m like, “Okaaaaay.”

So, it’s my sun-dried tomato and fennel stuffing that I do every year; that’s a tradition. My pie is always a tradition, every year, and our sour cream mashed potatoes are always every year.

And then everything else we just kind of shift a little bit. I always try to change it up and do the turkey a different way. Last year I smoked it, which was great. We fry it. There are so many things we do. But this year it’s going to be a traditional brine and roasting.

TT: Ooh, probably my mom’s cream cheese pie. Yep. I could eat the whole pie myself, if that says anything. Not that I would… I’m just saying.

TG: It’s always fun to listen to Christmas music while you flit about the kitchen. What is your favorite Christmas song?

TT: I’ll tell you one I can never get out of my head when it starts playing is ‘Jingle Bells.’ But I don’t know if I can say that’s my favorite. It’s probably my most annoying after a while (laughs). I like classical Christmas, listening to Frank Sinatra doing Christmas songs and things like that.

TG: Help us settle an age-old debate: When do you put your Christmas tree up, and when do you take it down?

TG: The new year is obviously about looking forward, but let’s look back for just a minute. If you could send you from 10 years ago one Twitter-length message, what would it be?

TT: Ten years ago? I would say, “Keep your head up, take deep breaths and make decisions based on love.”

TT: Treat each other with kindness. We could use that a lot right now.