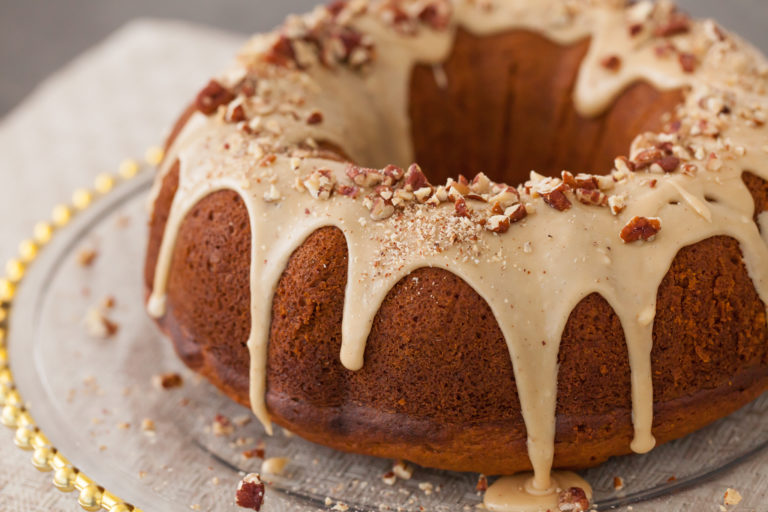 “Pumpkin pie spice,” as they used to call it, was one the forgotten spice — that little jar in the cabinet that was used maybe once a year in the fall. But those days are no more. Thanks in part to Starbucks’ popular pumpkin spice lattes, this warm and fragrant flavoring is the new “it” spice, as it is now used in everything from waffles to cheesecakes, pancakes, cupcakes — and even in cocktails.

Here, learn a delicious homemade pumpkin spice recipe (or ten), and find out some ways to infuse this spice in these not-so-basic recipes that will give that cozy fall feeling throughout the year!

What exactly is in pumpkin pie spice? There are several different blends of pumpkin spice, but many start with cinnamon and nutmeg, and then often have spices like allspice, ginger, mace, cloves or cardamom mixed in.

Wondering where the pumpkin is? Many people are surprised to find out that “pumpkin spice” doesn’t actually have any pumpkin, but its blend of spices do perfectly compliment the rich taste of this fall vegetable.

From brands like Monterey Bay to Spice Islands to McCormick, there are several delicious blends of pumpkin pie spice to pick up at the store. For those DIY’ers who want to make their own, check out 30 ways to make your own pumpkin spice blend for several easy and yummy homemade pumpkin spice recipes.

For example, Martha Stewart’s recipe contains cinnamon, ginger, nutmeg, allspice and a dash of ground cloves, while Alton Brown’s recipe infuses a star anise pod. These recipes are great because they can be customized for every palate. For example, for those that don’t like allspice, simply increase the amount of cinnamon, nutmeg and cloves.

This homemade pumpkin pie spice can be used in DIY creamy easy pumpkin spice latte (save money on Starbucks!) or try one of these delicious recipes below. 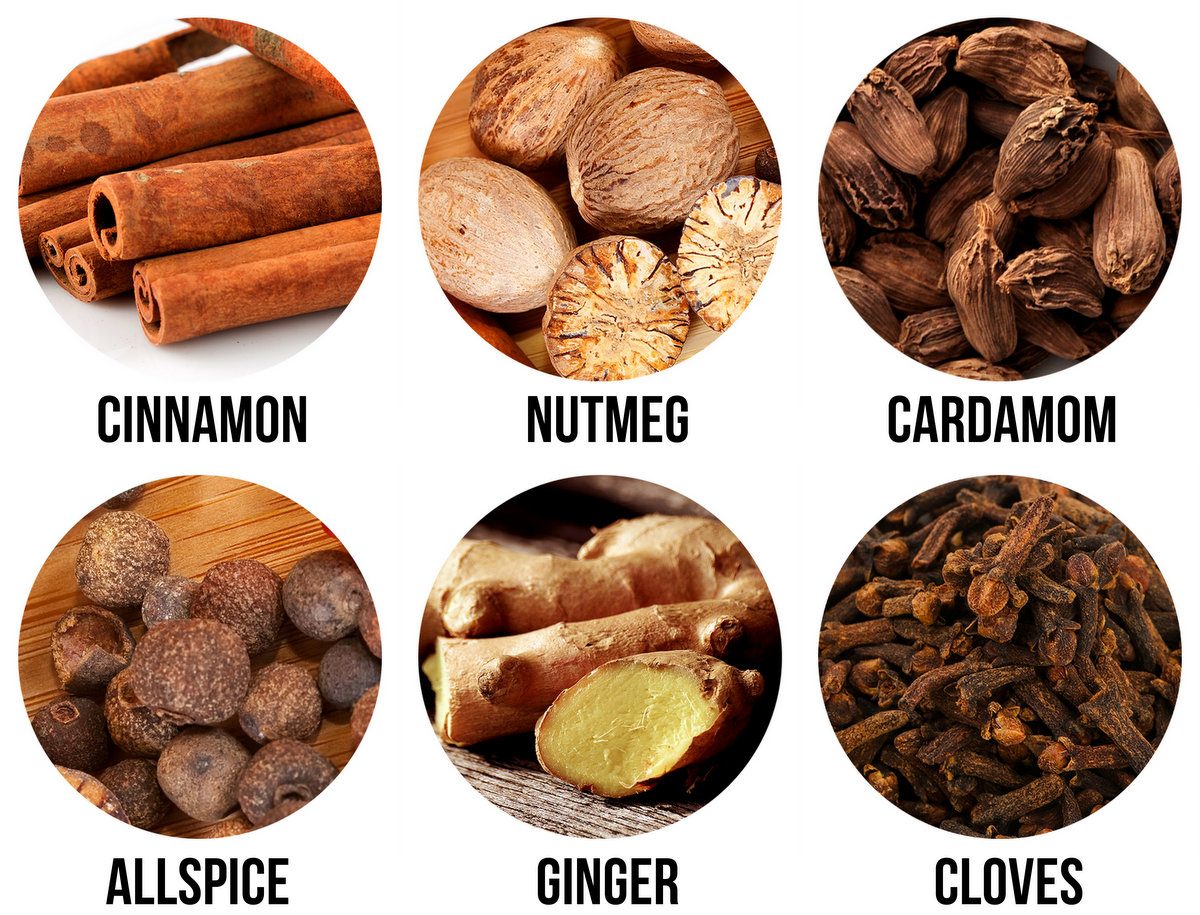 For those that want to branch out from traditional pumpkin pie, this recipe (pictured at the top of the article) for pumpkin bundt cake with brown sugar glaze and pecans will be a homerun. It has the same spices and pumpkin flavor of the pie, but in a moist cake with a delicious, rich glaze. Plus, a bundt cake makes for a pretty centerpiece!

To make the brown sugar glaze, combine butter, brown sugar, nutmeg, cloves and whipping cream in a pan until it boils, later adding in powdered sugar and vanilla once it has cooled. Pour the glaze over the cake and top it off with pecans.

MORE: See how to make a healthier pumpkin spice latte at home

This recipe starts with a pre-made pie crust and the normal pumpkin pie ingredients, however the spiced whip cream is the secret to this recipe. Simply whisk together sour cream, brown sugar, pumpkin pie spice and whipping cream and place a generous dollop on top of the baked pie.

Next, combine almonds with sugar in a skillet and cook until golden brown and sprinkle on top. For those with allergies, sugared pumpkin seeds would be just as tasty. 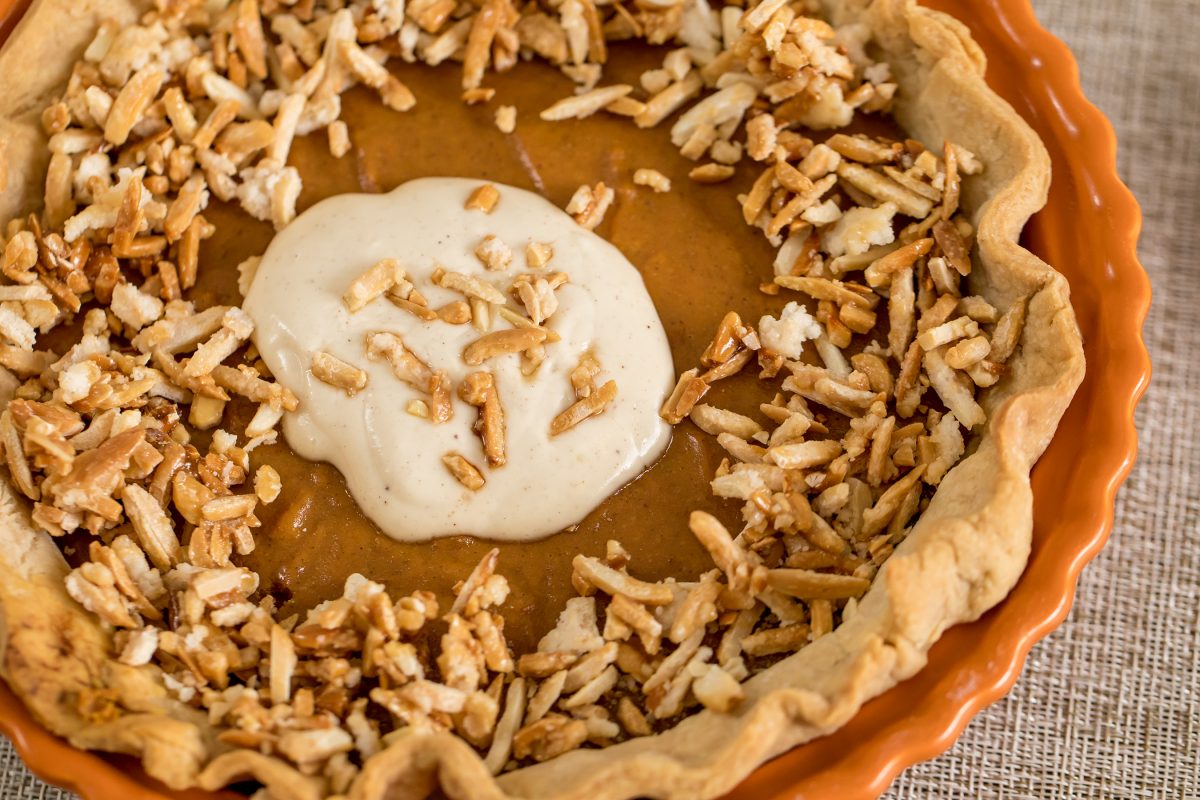 The cheesecake has all the usual suspects (cream cheese, pumpkin pie spice, pumpkin), however, in addition to the honey bourbon, it has a dash of Chinese Five Spice, which is basically a blend of cinnamon, cloves, fennel, star anise and peppercorns, to give it a warm and exotic flavor.

This cheesecake mixture goes into a homemade crust and baked until done. It would be delicious as is, however top off this deliciousness by pouring on the pecan caramel sauce, made with honey bourbon, caramel sauce and toasted pecans. Enjoy! 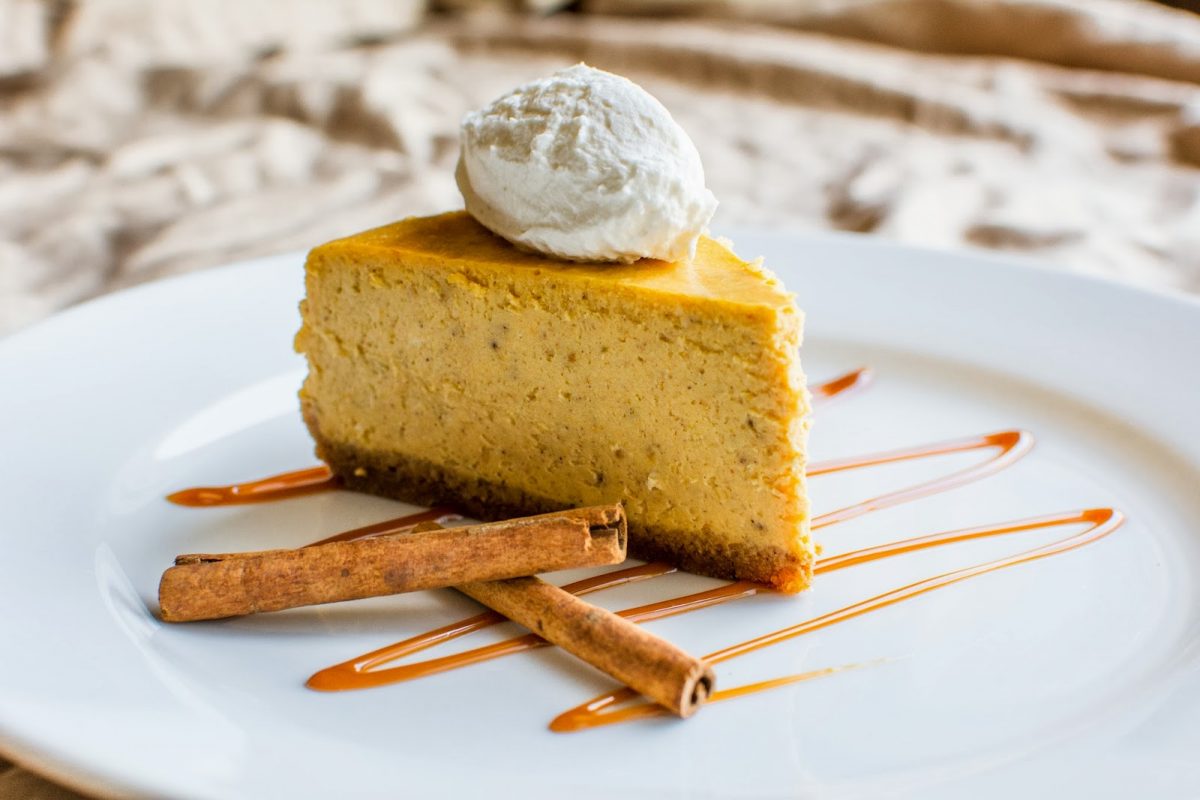 These delicious cupcakes combine the fall favorites of eggnog and pumpkin for a moist and flavorful dessert. These pumpkin eggnog cupcakes are also super easy to whip up.

Simply combine a box of yellow cake mix with eggs, oil and vanilla, and then add in pumpkin pie spice and pumpkin puree with Shamrock Farms eggnog. Spoon into muffin tins and bake.

While these are baking, whip up the cream cheese frosting, which combines the usual frosting ingredients (butter, cream cheese, powdered sugar) with the pumpkin flavors of cinnamon and nutmeg and then stir in a couple of tablespoons of eggnog. Frost the cooled cupcakes and garnish with graham cracker crumbs. 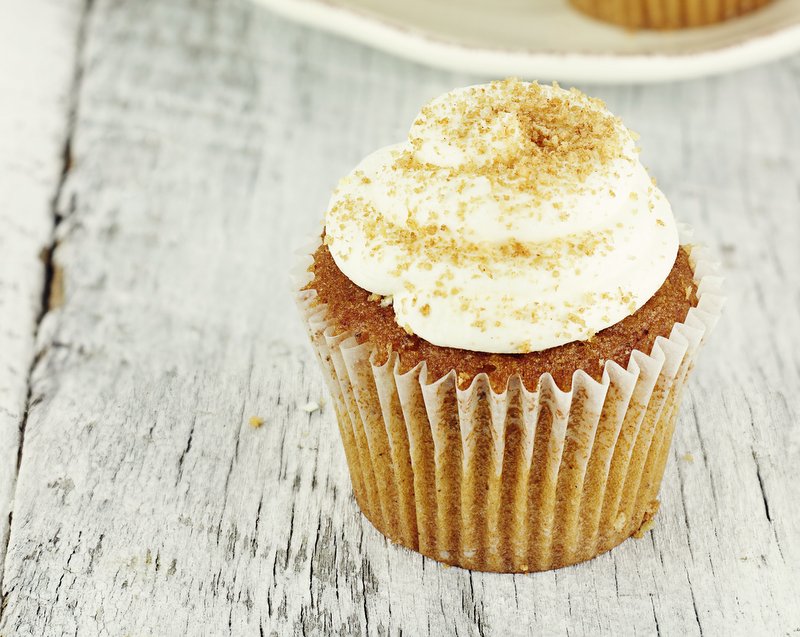 These moist pumpkin spice cakes are topped with a cream made from delicate mascarpone cheese and a little maple-flavored tuile (a crisp little cookie). Serve slices from one larger cake, or or prepare six smaller single-serving cakes, as shown here. Either way, your guests will be delighted. 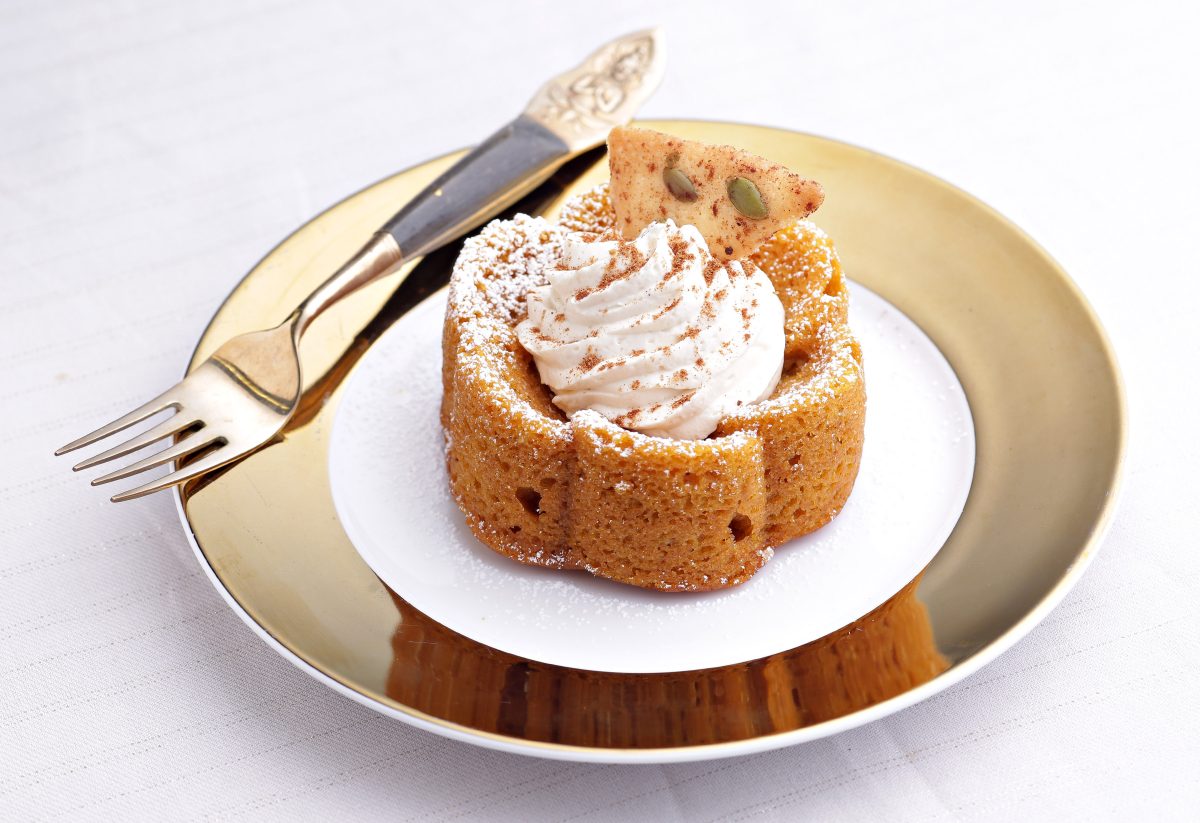 No disrespect, pumpkin pie. You come to the table with a lot of tradition. But sometimes you’re a little… well, boring.

This pumpkin spice cheesecake with a ginger oatmeal cookie crust has a dose of Jim Beam Honey and a little Chinese five spice. And that crack that always happens on top while baking cheesecakes? It will be hidden under a thick coating of honey bourbon caramel sauce dotted with toasted pecans. 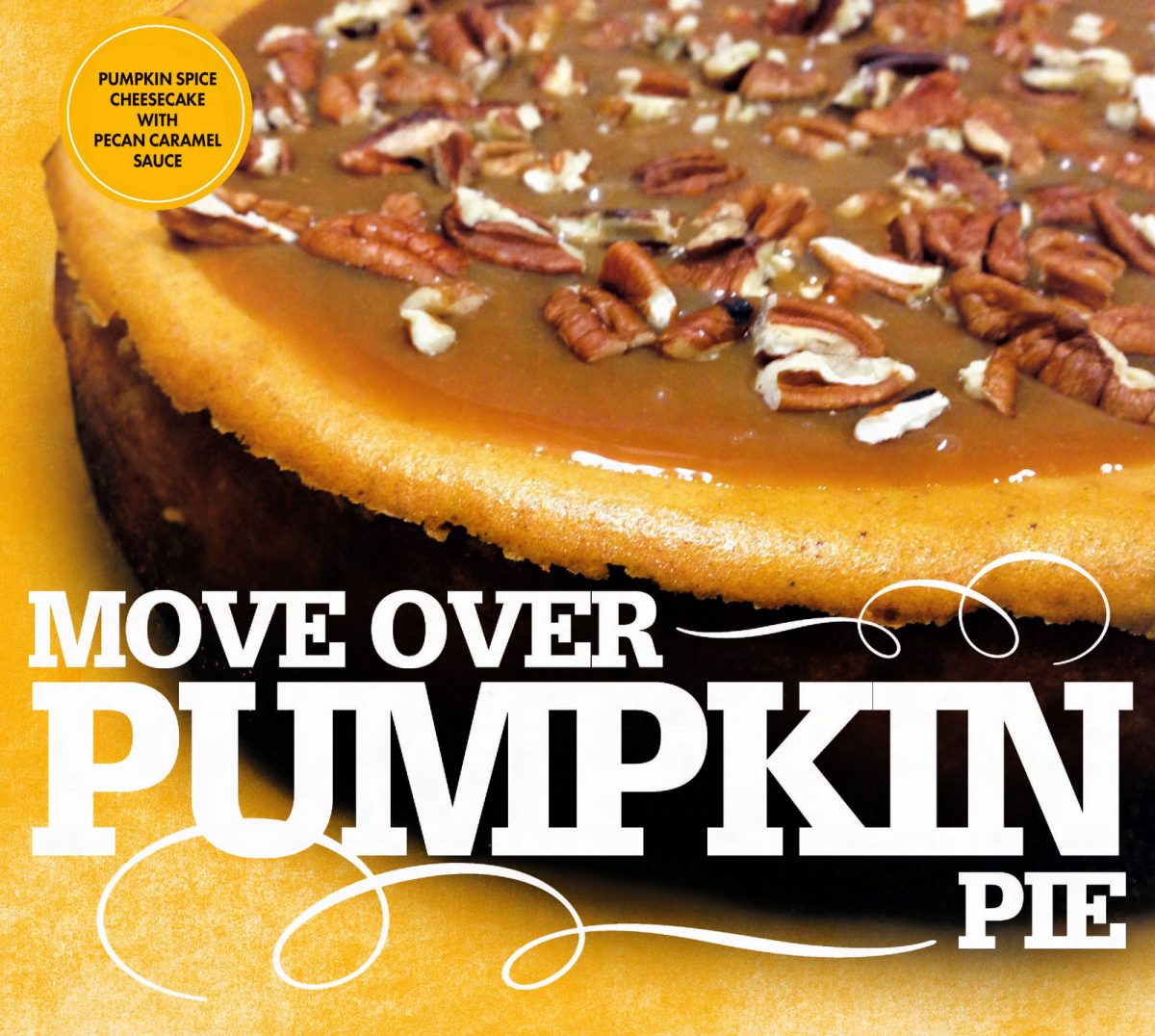 Give those normal pancakes a fall flair with this recipe for apple pumpkin pancakes. Simply combine multigrain pancake mix with water, pumpkin and nutmeg and place on a griddle. Place sliced apple slices on the dough and cook 2-3 minutes until done. Drizzle on the cream cheese glaze, made of butter, cream cheese, powdered sugar, vanilla and cinnamon, for apple-pumpkin pancakes that will melt in your mouth. 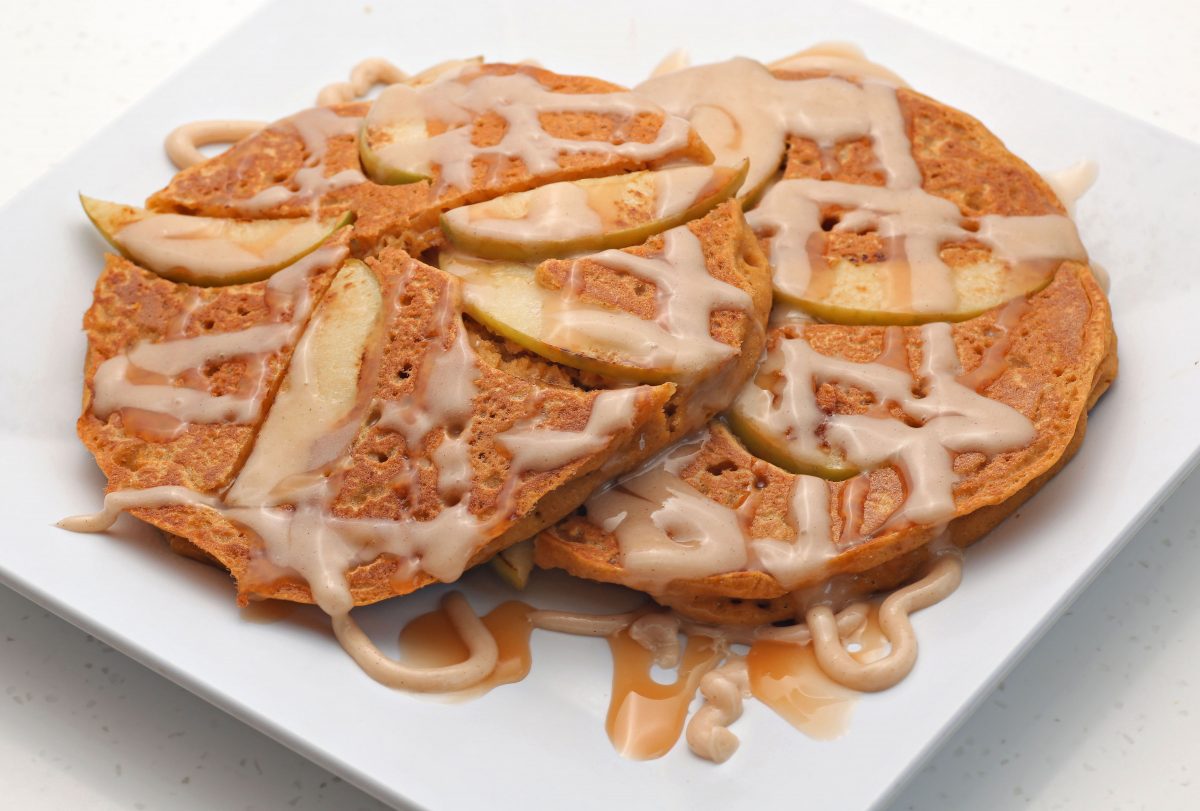 This apple pie overnight oats recipe has all the flavor of that favorite dessert, without the added fat and zero sugar. Start with old-fashioned rolled oats or steel-cut oats (instant oats turn gooey!) and place into a mason jar, top with cinnamon, ginger, cloves, walnuts, currants and unsweetened applesauce. The currants and applesauce give it that perfect touch of sweetness. Let it sit overnight in the refrigerator and its ready to enjoy in the morning!

This spiced rum apple cider is the perfect cocktail for a fall boozy brunch. Combine apple cider with brown sugar and pumpkin spice — including nutmeg, cinnamon sticks and cloves — in a pan until the sugar is dissolved. Combine club soda (gives that perfect amount of fizz!) with rum in a glass and top with the pumpkin-spiced cider mixture. Cheers! 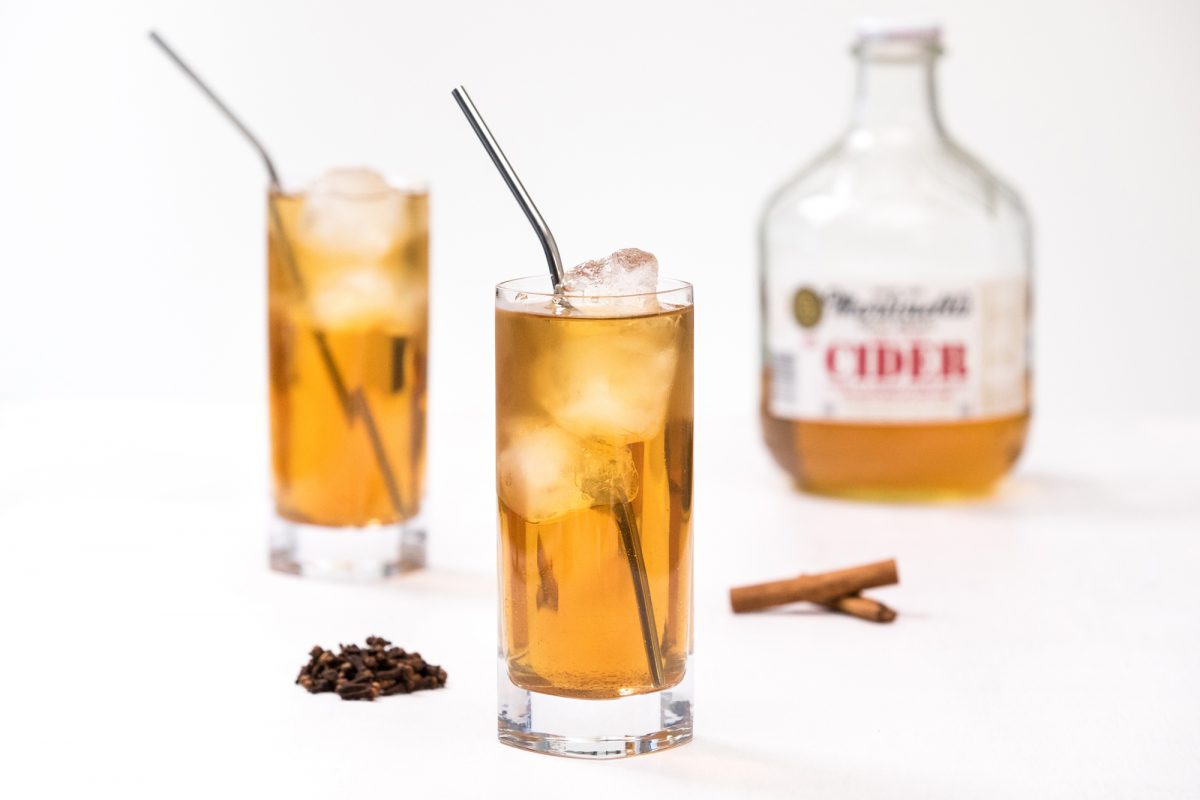 Pumpkin pie spice is not only delicious in pumpkin spice lattes and pies, but in all kinds of other things — from pancakes to molded cakes. In fact, here are 18 more delicious pumpkin spice latte flavored desserts to go crazy over. Have fun experimenting and enjoying this fragrant spice that infuses a bit of coziness in our favorite foods and drinks.