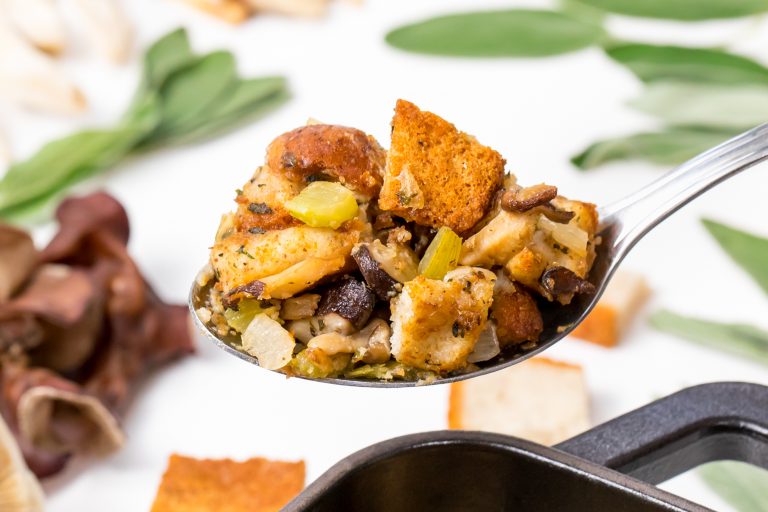 Looking for the best vegan Thanksgiving stuffing to serve on your holiday dinner table? Our mushroom stuffing, inspired by Tasty-Yummies, is not only delicious and vegan-approved, it will also make guests on a gluten-free diet weak in the knees.

Chockfull of earthy-rich cremini and wild mushrooms, this Thanksgiving stuffing is made with your favorite gluten-free, vegan bread and a simple but aromatic combination of onions, celery, vegetable broth and fresh herbs. The intensely flavored mushrooms don’t need much help when it comes to making this palate-pleasing holiday side-dish a rave.

First a word about cremini mushrooms. Though the white button mushroom is the most common and economical fungi at the grocery store, it is actually just the young variety of mushroom that ages and becomes the brown-colored cremini mushroom. If it ages some more it morphs into the oversized portobello.

We love the cremini mushroom because as the button mushroom matures, it gets richer in flavor. The cremini may be a bit more expensive than its younger counterpart, but the boost in earthy flavor it gives is indispensable — and worth the extra cents.

Why wild mushrooms? In addition to the widely available cremini, our mushroom stuffing puts wild mushrooms on at the forefront. Certainly, cremini mushrooms lend a lovely earthy flavor but wild mushrooms show up with mouthfuls of coveted umami flavor that turn this vegan stuffing into a soul-satisfying side-dish that even meat-lovers will devour.

If available, use fresh wild mushrooms, such as chanterelle, truffle, morel, porcini and shiitake. You can also find gourmet mushrooms in dried form. Simply reconstitute dried mushrooms with boiling water until tender. Drain and chop before adding to the stuffing.

Easy to prep. Not only is this vegan stuffing delicious and nutritious, it is delightfully straightforward and quick to prepare. All of the vegetables are sauteed on the stovetop, tossed with the gluten-free bread and broth, then baked to perfection. The hands-on time is minimal and then your oven takes over. Easy peasy!

Heat olive oil in a large skillet over medium-high heat. Add cremini and wild mushrooms, onions, celery and fresh herbs to the skillet. Season with salt and pepper. Cook, stirring often, for six to seven minutes or until the onions are soft and translucent. Set the mushroom mixture aside. 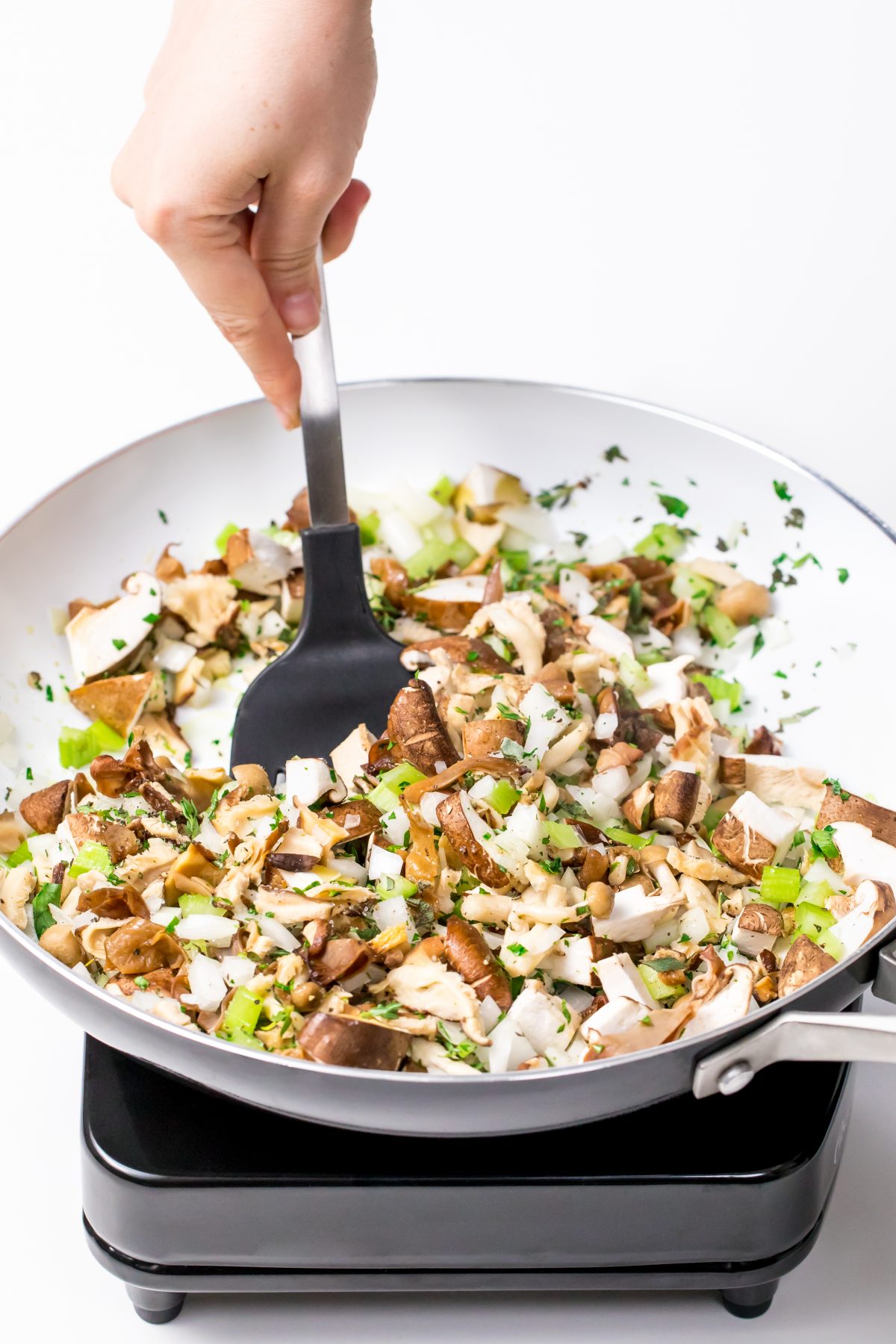 In a large bowl, combine the bread cubes and one cup of the vegetable broth. If the mixture is dry, add more broth in small increments until the bread is wet but not soggy. Add the mushroom mixture to the bread and mix well. 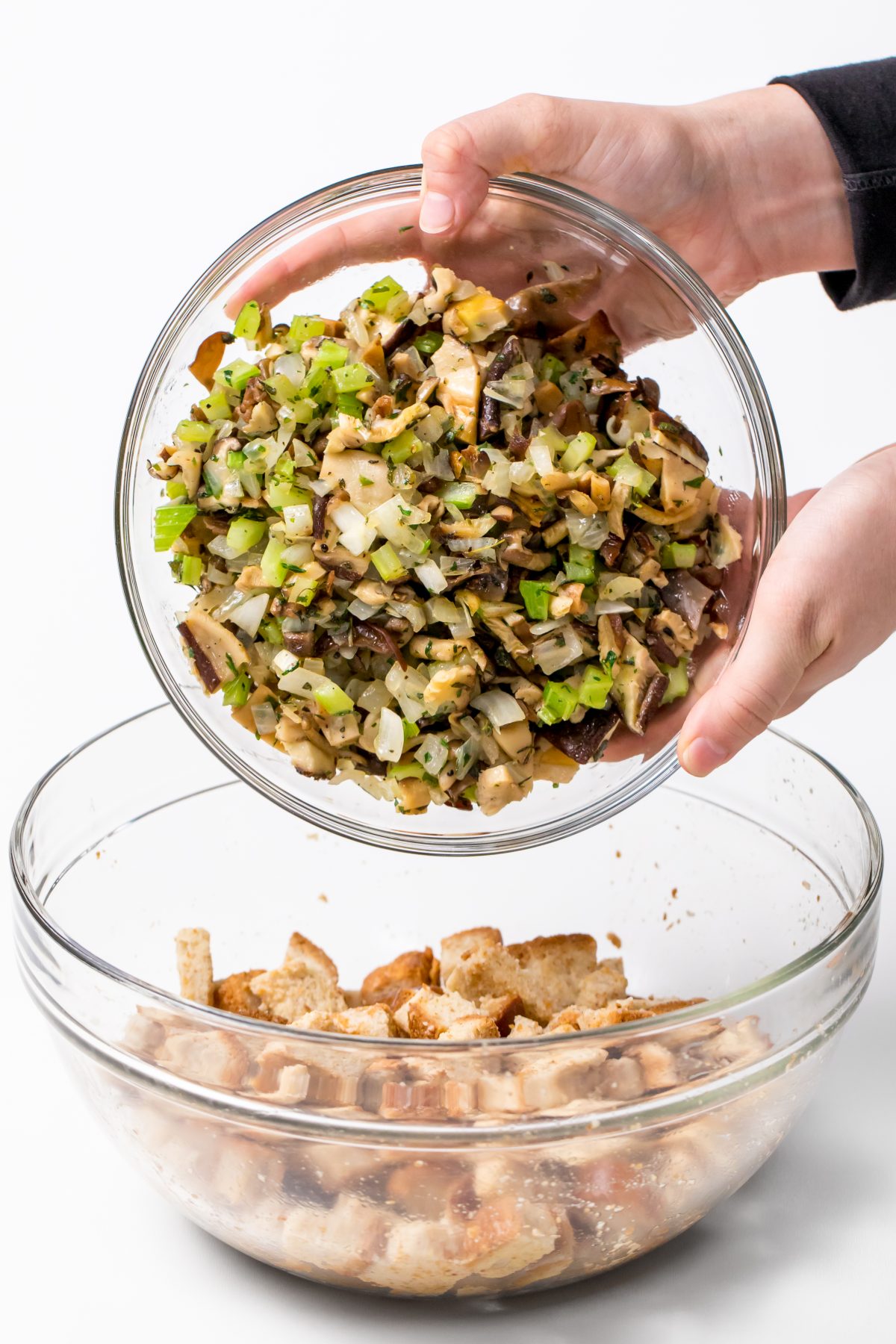 Transfer the stuffing to a large baking dish sprayed with cooking spray. Bake at 350F for 45 minutes to one hour or until the top of the stuffing is beautifully browned and crispy. 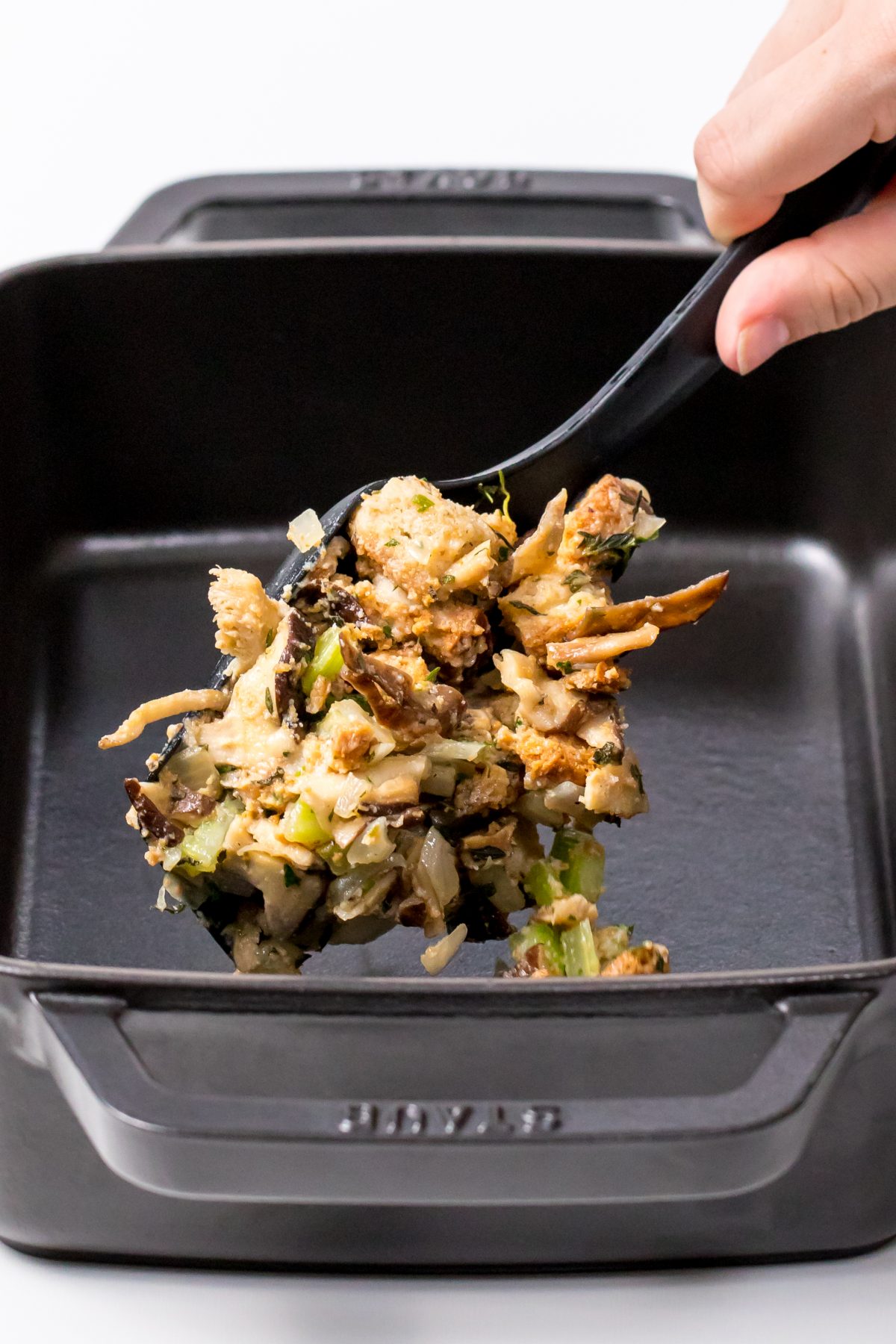 Bring the mushroom stuffing to the table hot out of the oven.

A beautiful side dish you can be proud to serve up! 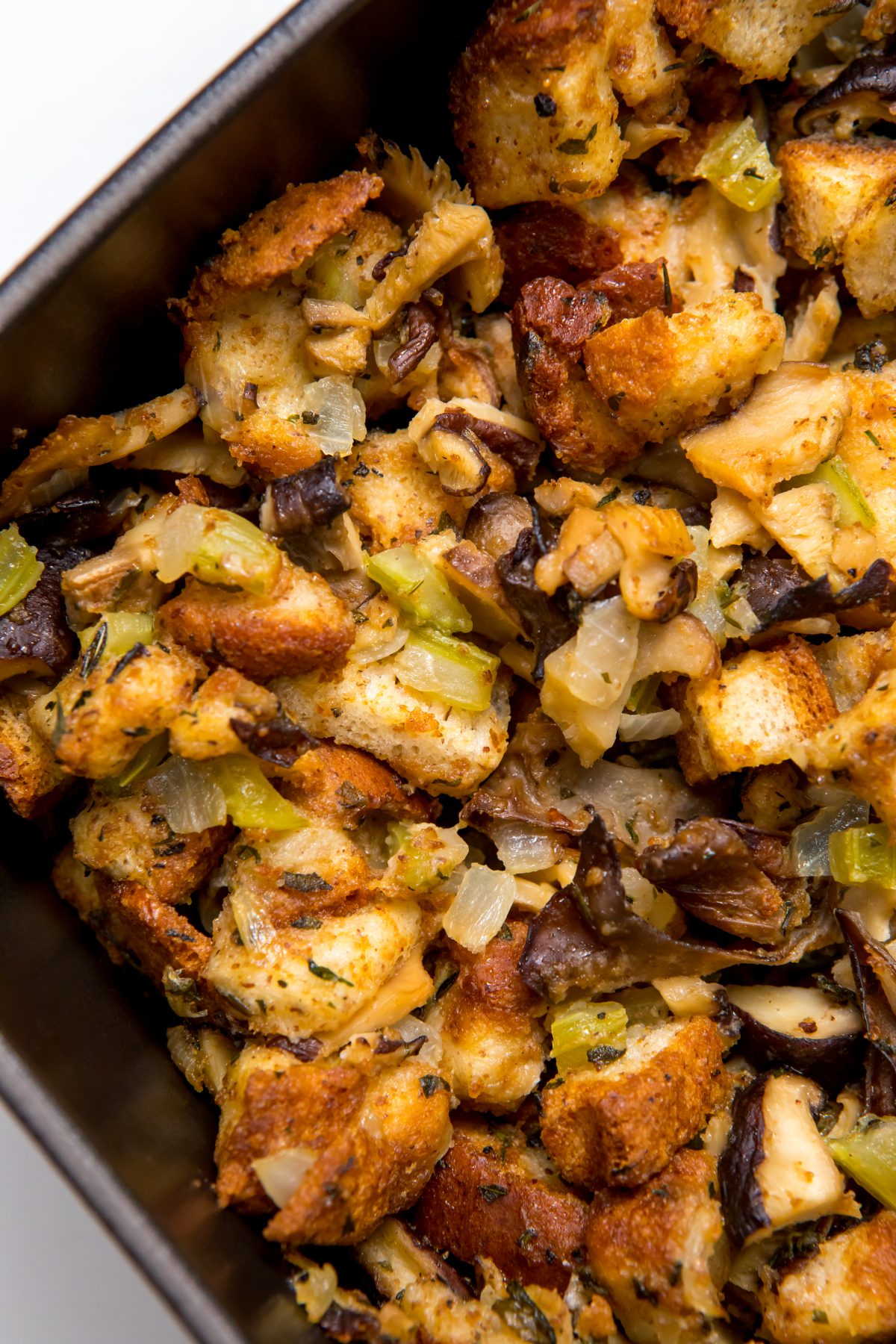 So many wonderful textures and flavors! 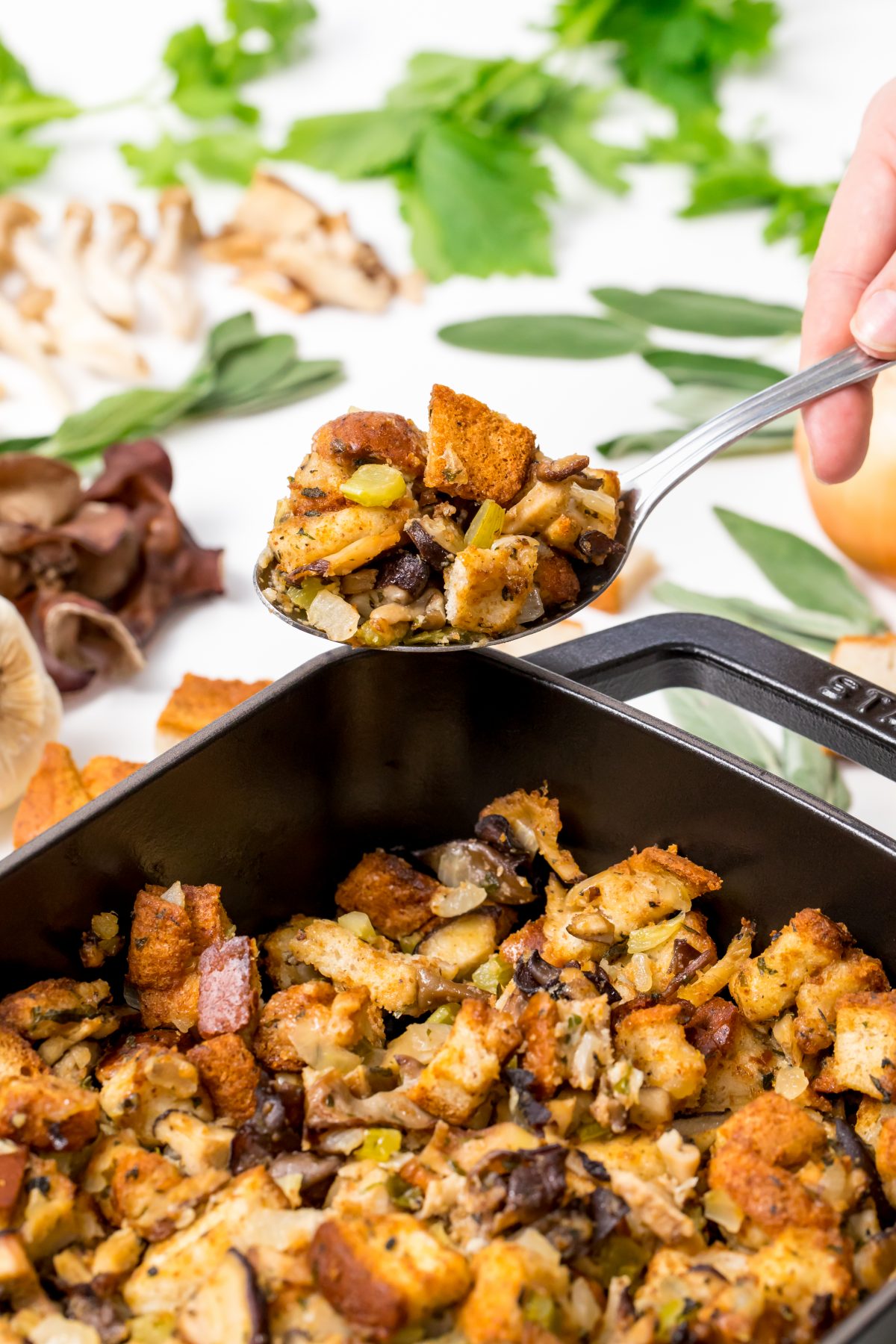 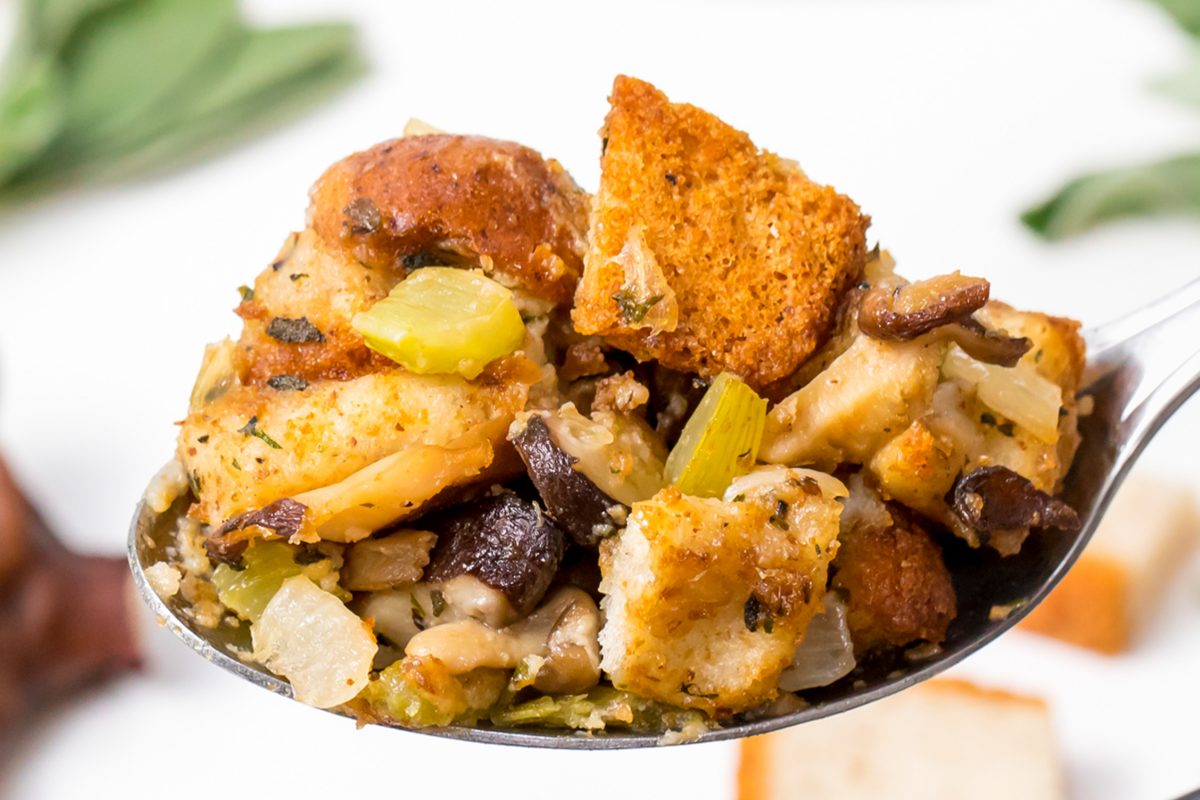 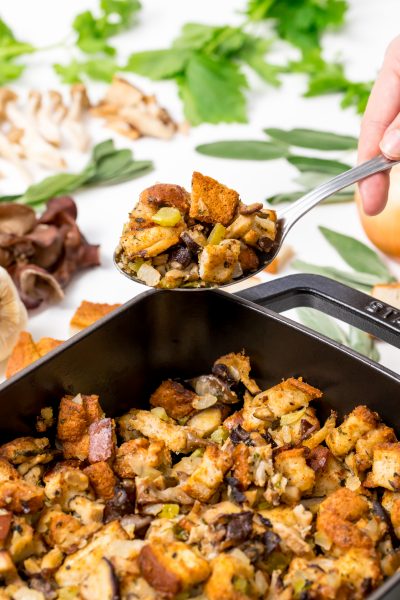 Love this? Check out what it’s like to grow 600 POUNDS of gourmet mushrooms each week! 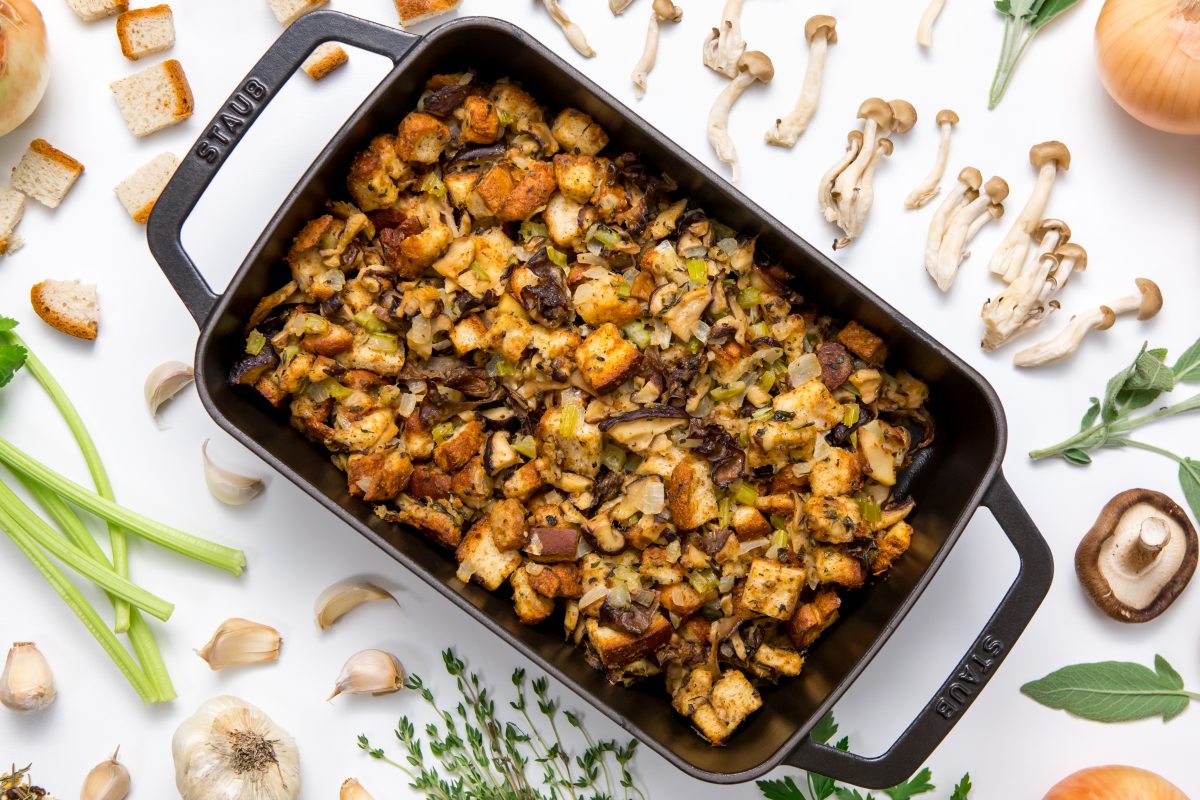