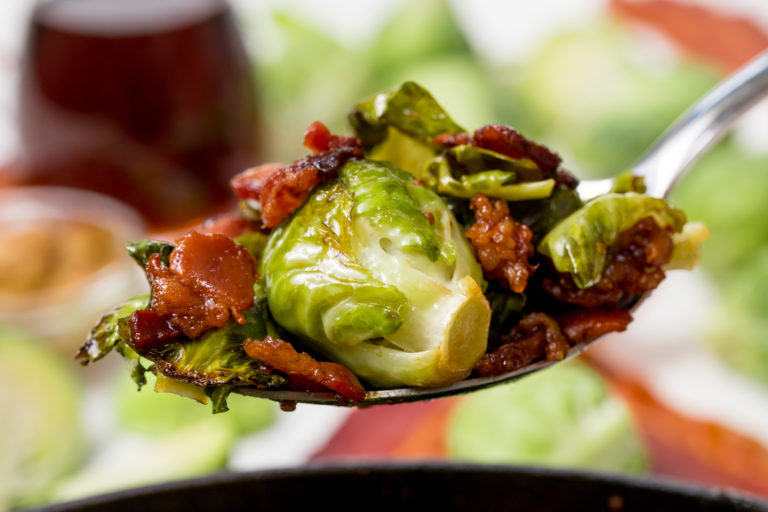 Brussels sprouts! You either love them or hate them (we love them). We have a recipe for these mini cabbage-like buds that will make them irresistible no matter how you feel about them. Our maple bacon roasted Brussels sprouts, inspired by My Man’s Belly, boast the vegetable’s nutty flavor that is delectably complemented with big bacon savoriness, naturally sweet maple syrup, a hint of tart apple cider vinegar, and a tongue-tantalizing punch of grainy mustard. What’s not to love?

Unfortunately, these little sprouts have a contemptible reputation for many people. This terrible defamation is due to poor cooking methods that reduce the cruciferous vegetable to a stinky hated dish at the table. Ugh! This maligned veg deserves better treatment in the kitchen and star status as a Thanksgiving or Christmas side dish. Really! Let us show you how to make Brussels sprouts a beloved accompaniment for your holiday table!

Believe it or not, these tiny cabbage-like vegetables secretly hide natural sugars that are just begging to be released. The key to uncovering their inherent deliciousness is cooking them in a way that turns them nice and brown, caramelizing their exterior, and rendering their interior tender and irresistible. Our recipe calls for small Brussels sprouts, which ensures that your holiday side dish will exude the buds’ natural sweetness. Older, larger sprouts resemble their larger cabbage family members—and that’s all good and well, but we want small here. All cruciferous vegetables are good for you, but the younger the vegetable, the better.

If possible, visit your local year-round farmers market to pick up a long stem of baby or smaller Brussels sprouts. Typically, these farm stand buys will be fresher and at the height of their naturally nutty, savory flavor. You can also talk to your local supermarket produce manager and request the freshest delivery of Brussels sprouts. It may take a bit more effort than just picking up a pre-packed bag of Brussels sprouts, but it will be well worth it!

Before you roast your Brussels sprouts, rinse them well and use a sharp knife to slice off the stem end of each sprout. Remove any outer brown, tough, or wilted leaves. There won’t be many if you buy them ultra fresh.

We use a cast-iron skillet to cook our Brussels sprouts because cast-iron is king! Cast-iron skillets can be easily and safely heated to high temperatures, retain their heat, and if properly preheated, will naturally prevent food from sticking to the surface.

Place your cast-iron skillet in the oven and heat the oven to 500°F. When the skillet is scorching hot and the oven is preheated, remove the skillet from the oven and spread chopped bacon over the bottom of the skillet. Cook the bacon in the oven for about eight minutes or until it cooked. Watch carefully because bacon will burn quickly.

Create the complementary flavors: In a small bowl, whisk together the maple syrup, apple cider vinegar, and mustard. Set this sweet and savory mixture aside while the Brussels sprouts get roasted to perfection.

Once the bacon is cooked, add the Brussels sprouts to the still hot cast-iron skillet and stir until they are coated with the rendered bacon fat. Slide the cast-iron skillet back into the oven and roast the sprouts until they are sublimely browned and slightly crisped. This will take about 15 minutes, but we suggest watching the sprouts as they cook to make sure they don’t get charred.

Remove the skillet from oven and pour the maple syrup sauce over the Brussels sprouts and bacon. Stir the sprouts until each one is scrumptiously coated.

Serve it up! Your maple bacon roasted Brussels sprouts are ready for the table. Serve it rustic in the hot cast-iron skillet or transfer the sprouts to a bowl and set it on the table. Sit back and revel in the accolades!

Preheat your cast iron skillet before adding bacon by placing it in the oven at 500F. 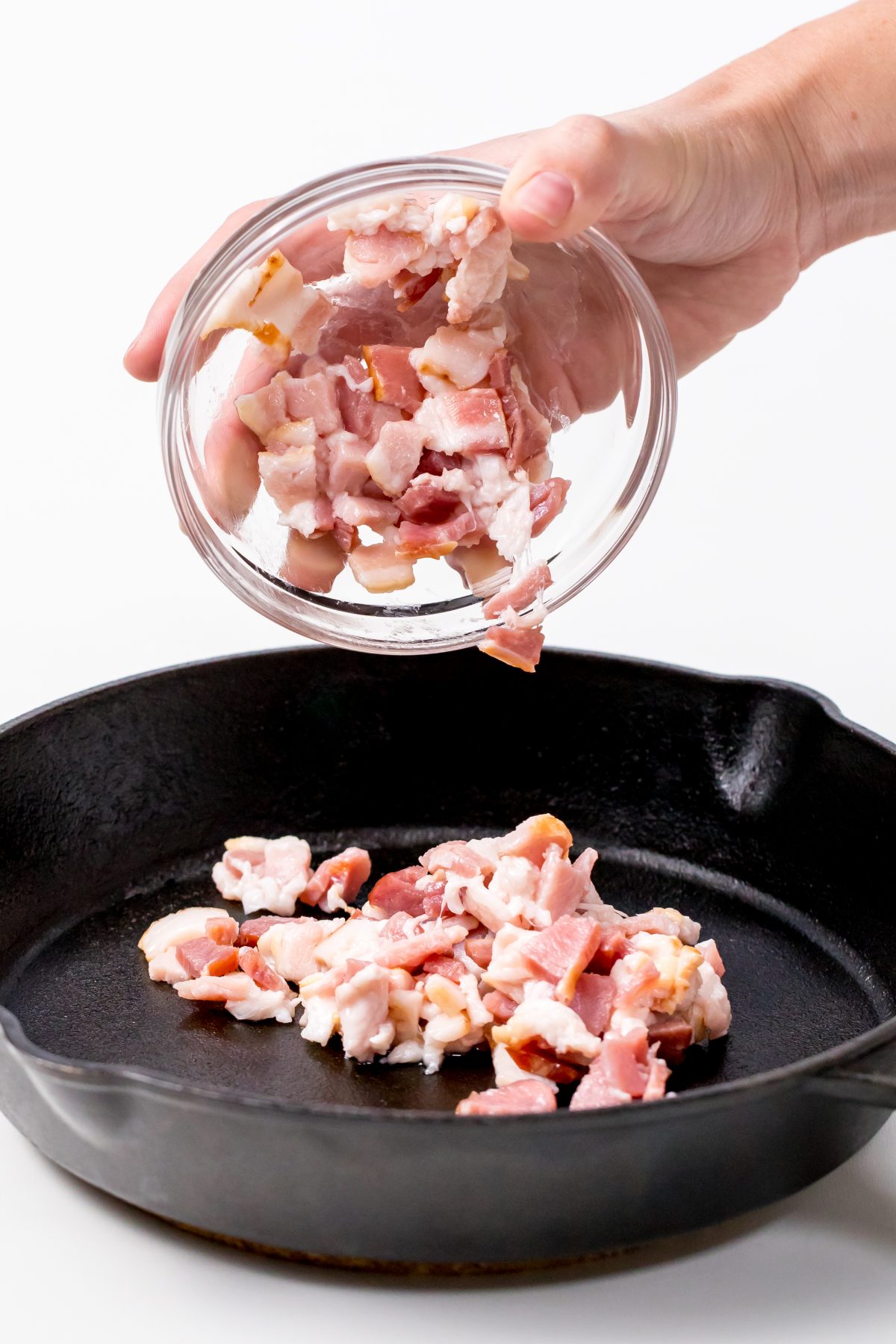 While waiting for the bacon to cook, combine these ingredients for the perfect flavor addition to your dish. 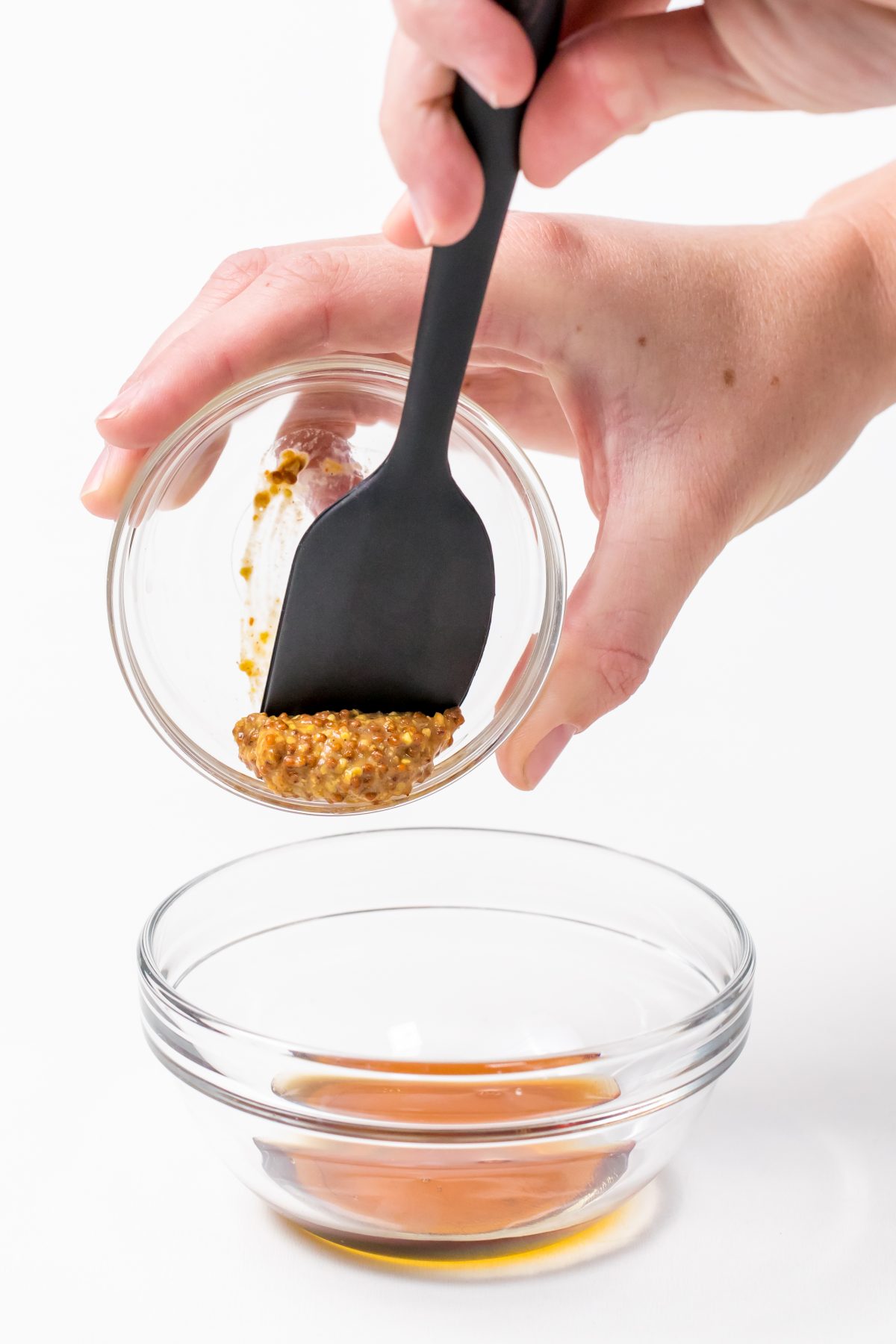 Coat the Brussels sprouts in fat for even more of that delicious bacon taste. 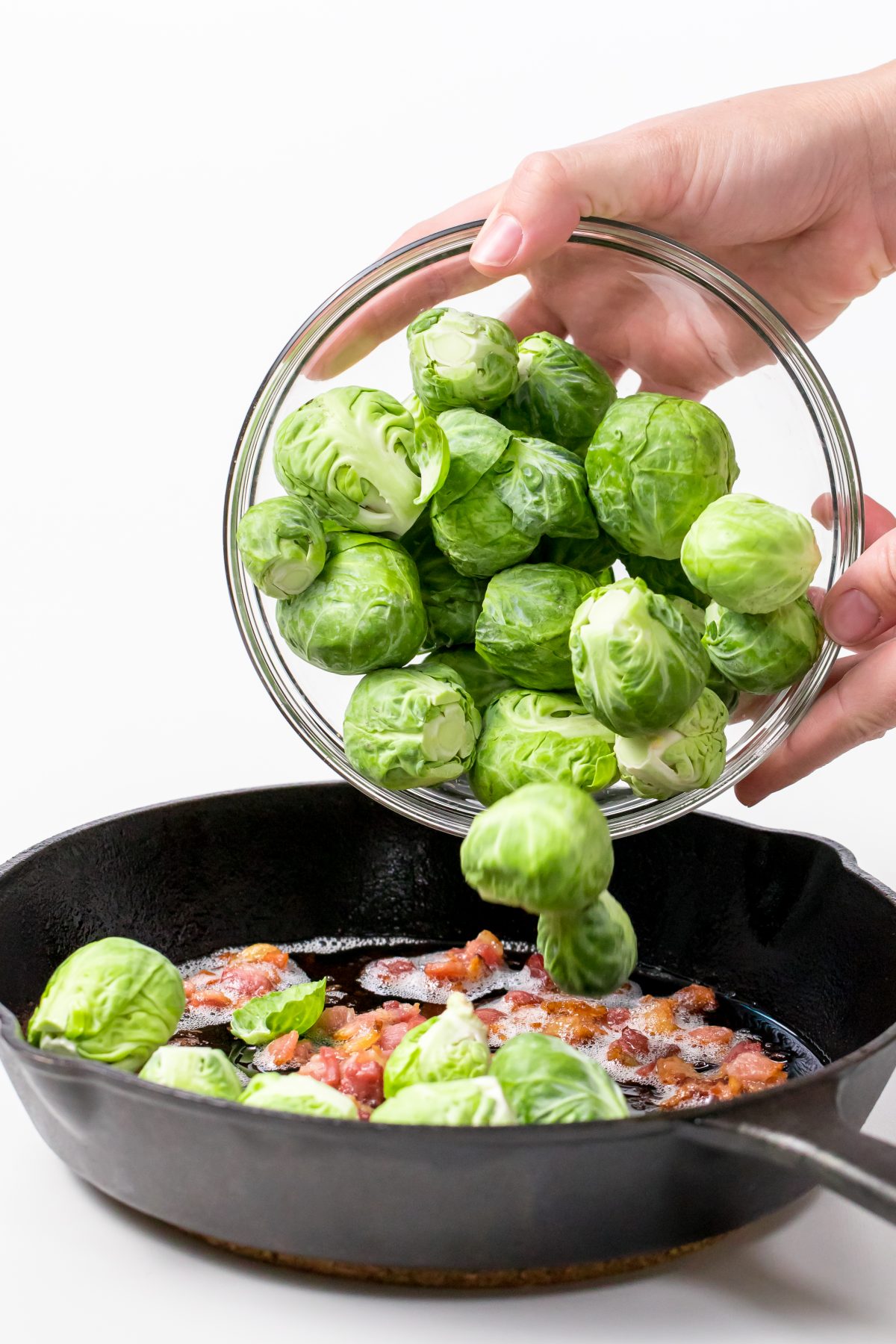 Allow the bacon and Brussels sprouts to roast in oven

Add skillet to the oven, watching carefully so that the dish does not get too crispy. 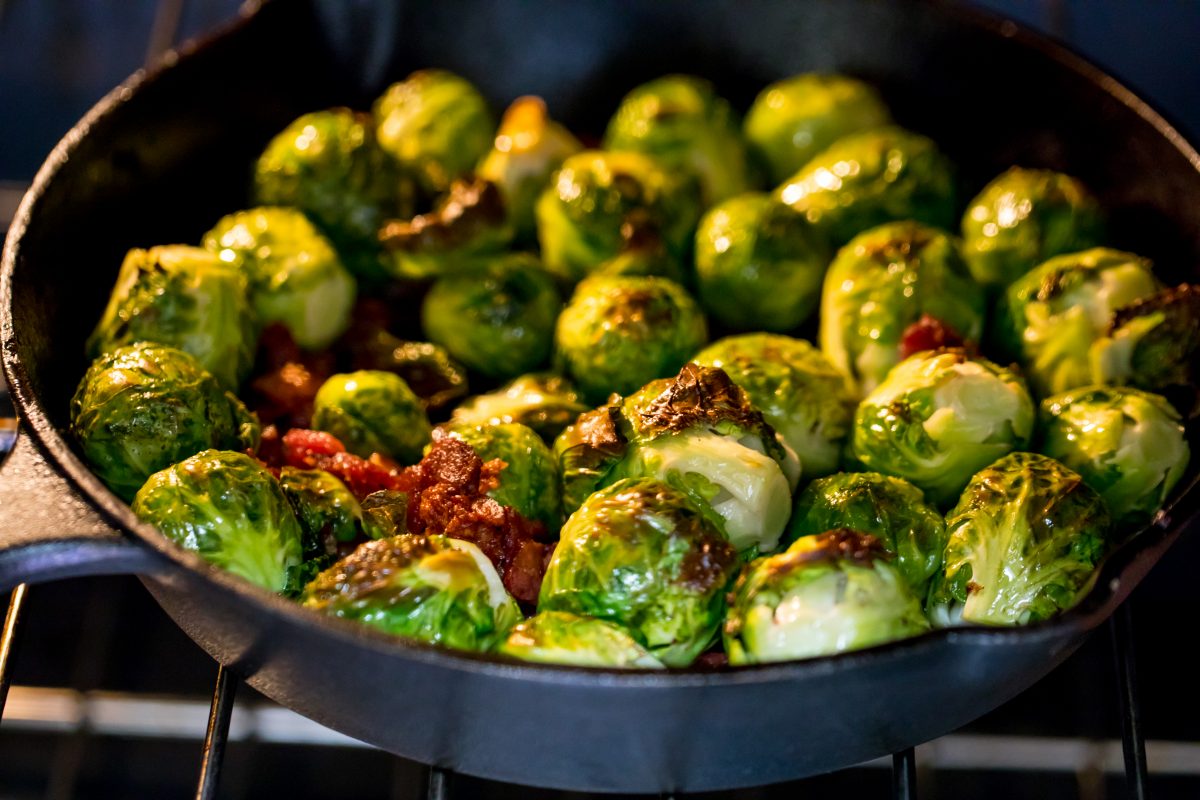 Stir Brussels sprouts and maple syrup mixture together to evenly glaze the ingredients. 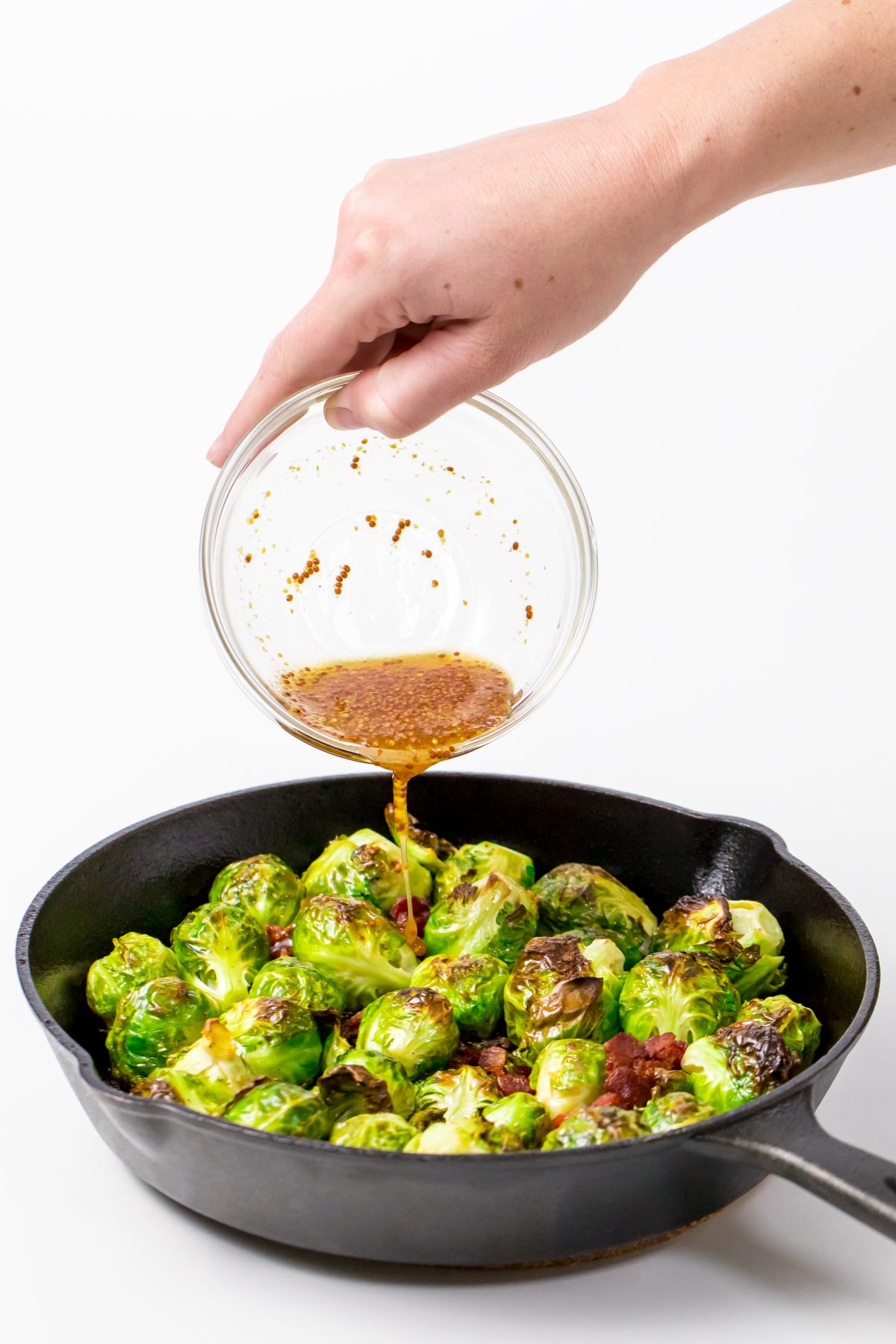 These roasted Brussels sprouts are sweet and savory

This dish is best served fresh out of the oven and makes a delicious side. 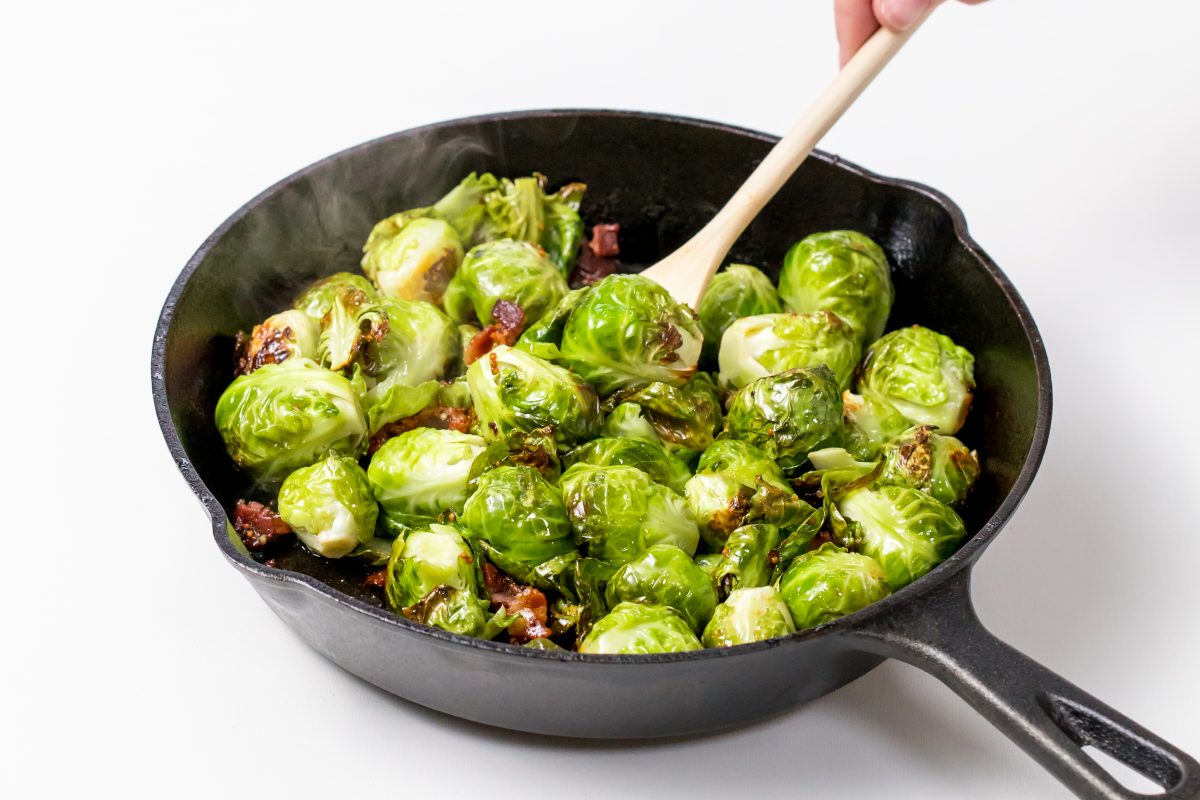 Check out this amazing side dish 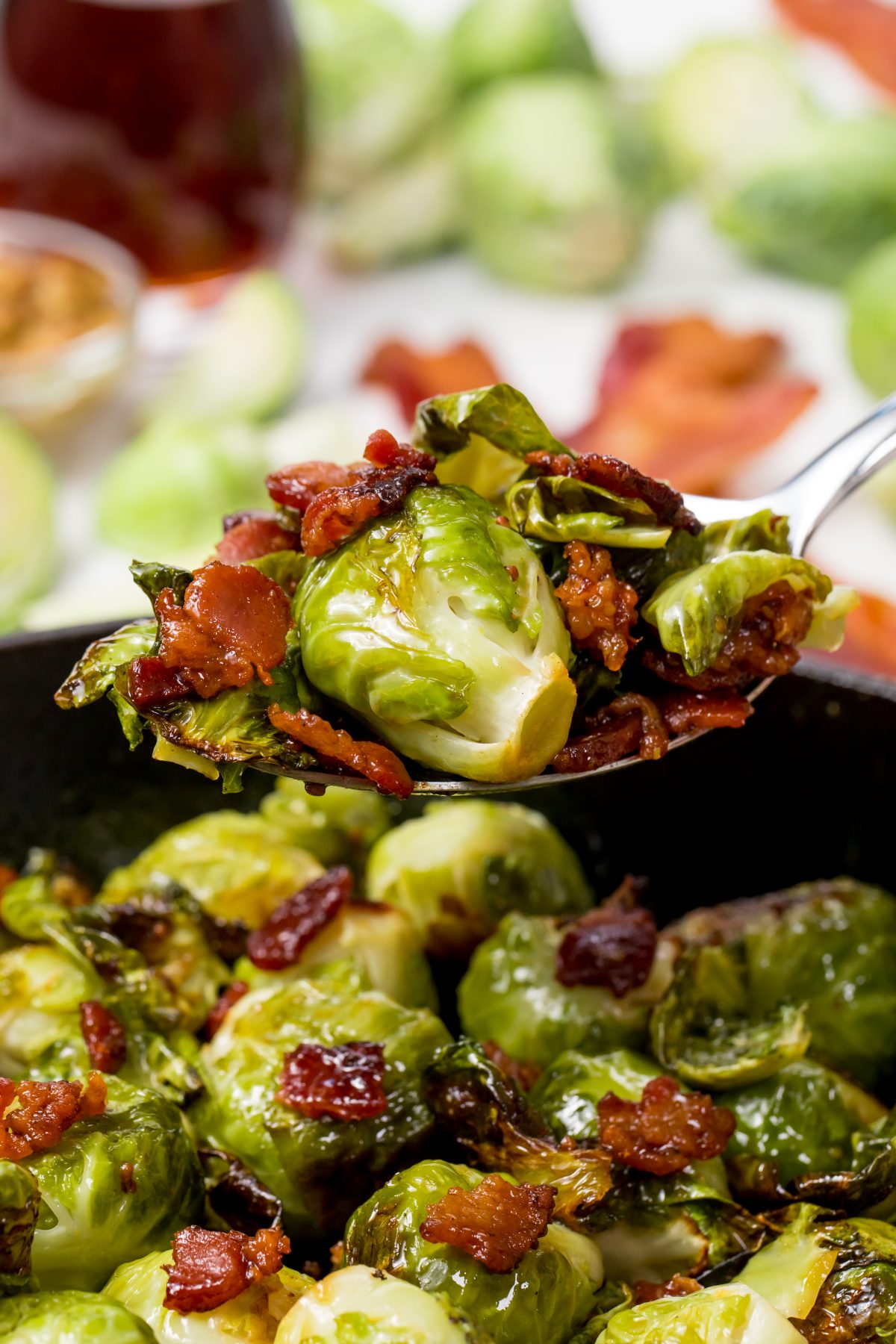 Have you ever seen sprouts look this good? 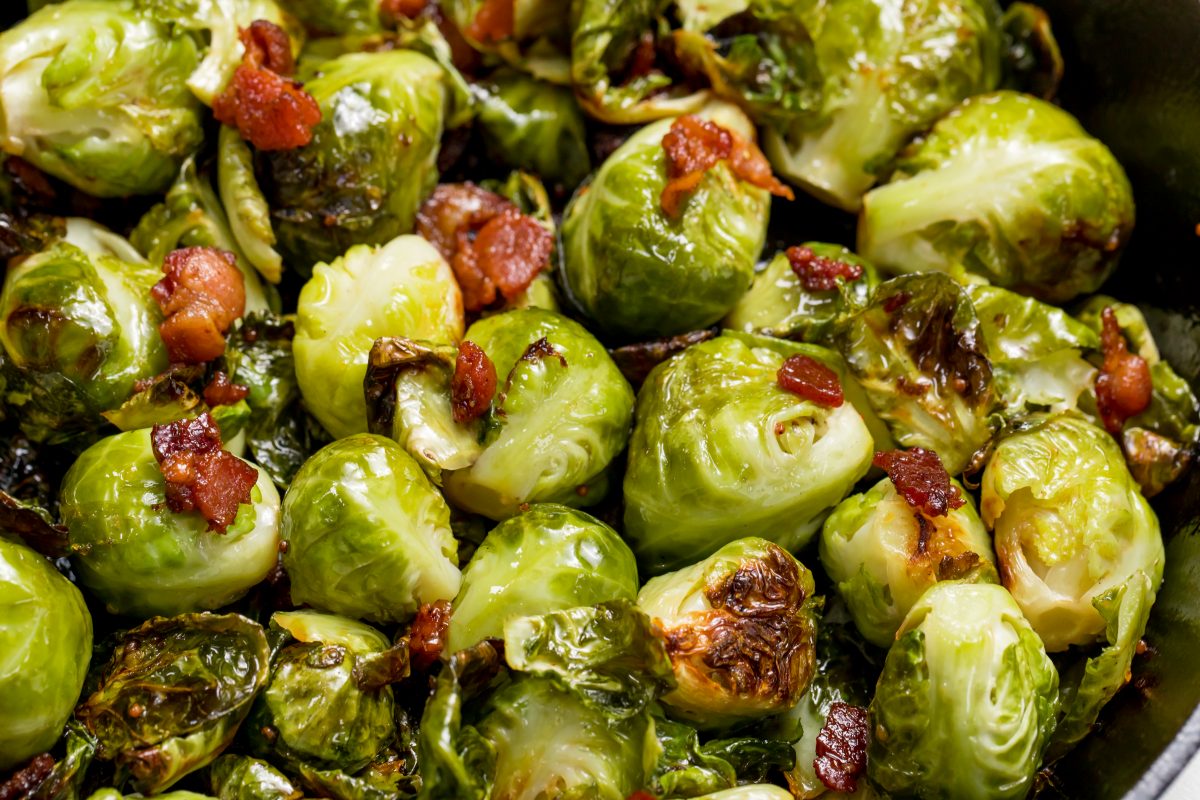 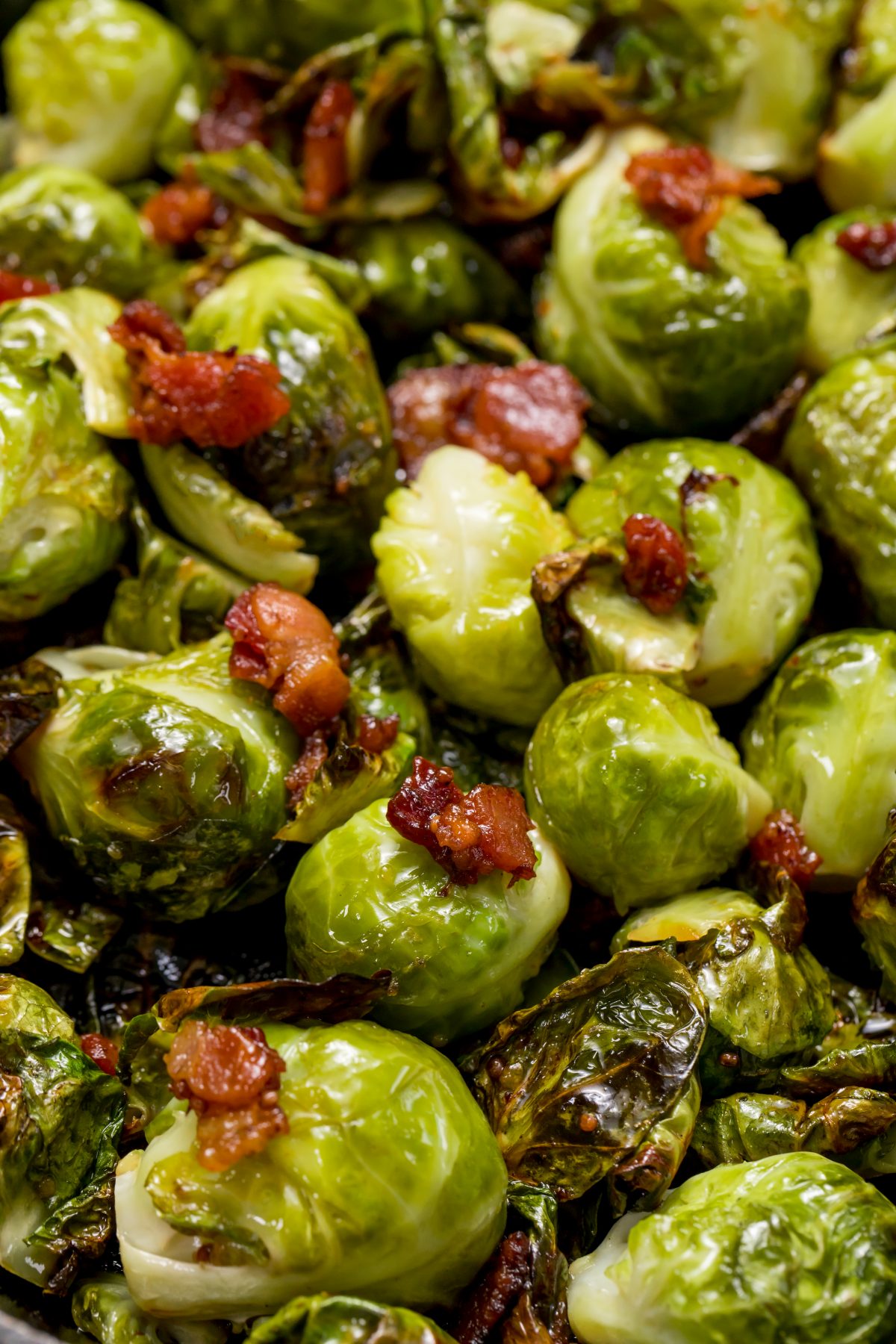 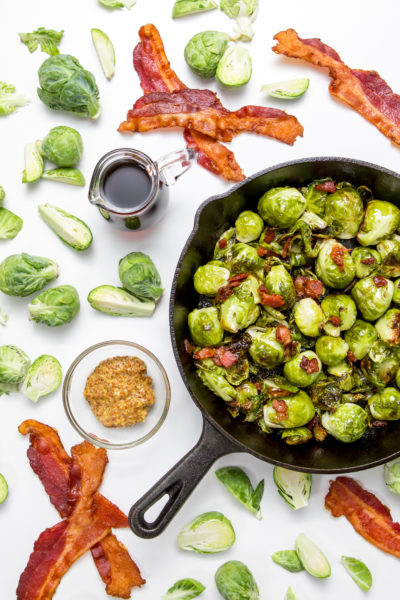 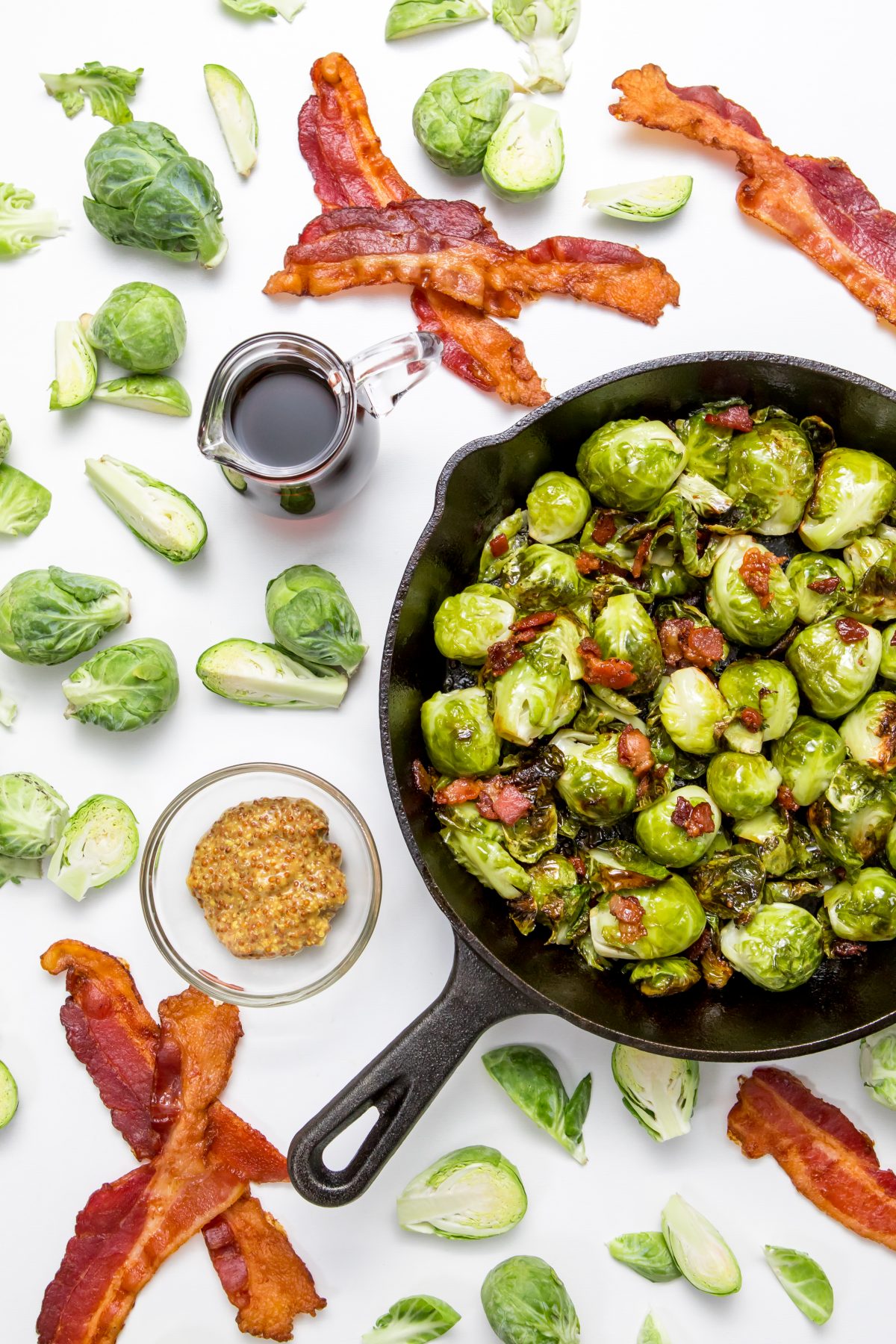