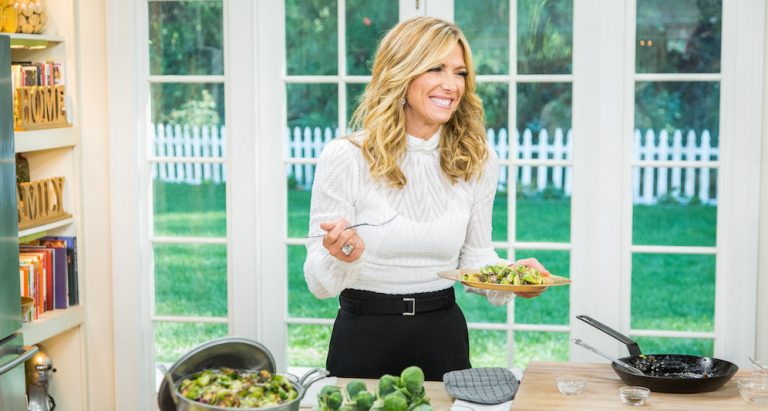 That’s probably why Debbie released her Mediterranean cookbook, It’s All Greek to Me. Before the big day arrives, we caught up with her to discuss what’s on her Thanksgiving menu this year, what traditions – new and old – she plans to carry on, and what she’s feeling most grateful for in 2018.

What is your favorite thing about the holiday season?

Debbie Matenopoulos: That feeling in the air… There’s something about it – regardless of what’s happening – everyone just sort of has this way about them and this vibe about them and this feeling about them . Everything begins to feel nostalgic and warm and cuddly. Everyone’s still going about their days, but the music is playing and there’s different scents in the air and all the fun stuff you see in the stores and the decorations and the streets. It just makes me feel like a kid. I love it… It smells like Christmas, no matter where you go. And I really appreciate that.

What Thanksgiving traditions did you have growing up?

Debbie Matenopoulos: We kind of bounced around. We went from my parents’ house to then my sister’s house to my sister-in-law’s house in Virginia Beach, but it was always the whole extended family around the table eating your traditional Turkey and gravy and ham and all the sides. There would be some Greek traditional dishes like spanakopita… then we’d all watch the Dallas Cowboys game, because that’s my family’s favorite football team forever – since I was born. So we’d watch the game and people would come in and out all day, like friends of the family… the kids would run around playing outside. By the time we were all old enough, we would always watch the game – depending on what time [it] was on – and then go to a movie at night. Then it sort of evolved. As my sister and brother had kids – I’m the youngest, so I’d still didn’t have kids – but we started this tradition a few years ago where we all sit in the living room and watch Christmas Vacation and that would always sort of denote the beginning of the Christmas holiday for us. My whole family can probably quote that movie line for line.

Have your Thanksgiving traditions changed?

Debbie Matenopoulos: In the last few years since having Alexandra, we’ll stay in California usually because it’s a lot to fly between the coasts. My family’s in Virginia and John’s family is in New York, so we’ll stay on the West Coast [for Thanksgiving] because for Christmas, we fly back. John’s family has a house in La Quinta, in the desert. So we will go to the Palm Springs area and we’ll all go to the grocery store together, usually the day before. My father-in-law is a really amazing home cook and he’s taken a lot of culinary classes. So he does most of the baking with the exception of my pomegranate trifle that I love to make, so much. But we’ll go and get all of our things for our sides and we’ll start planning the meal. I do the turkey and I do all the sides like the brussel sprouts and the mash.. Then my father-in-law will make the most amazing pies and tarts and cakes. The day before, to start, I kind of make a game plan. Before, I used to just be kind of loosey-goosey, but now I try to get everything timed correctly. I will literally make a script and it’ll say, ‘Okay, this has got to go in here, and this here.’ I need to have a schedule of what is happening when.

What recipes would you recommend people make this year?

How many people are at your Thanksgiving dinners?

Debbie Matenopoulos: At my mother-in-law’s house now, it’s not many – about six of us and the neighbors will come in and out… it’s very mellow and quiet compared to what it’s like on the East Coast with my family. A crazy big Greek family with 15 kids and my sister and my brother and you know, all the extended relatives. It’s wild, which is super fun. It’s really fun for the kids, but you know, it’s a lot to go back and forth for Christmas and Thanksgiving, especially on my schedule. But it’s really nice to do this with a backdrop of beautiful La Quinta with the golf course. And then I do all my recipes and keep it nostalgic for me. Even though no one really likes football except for me on my husband’s side of the family – they’ll sit and watch the Cowboys game with me. And the last few years, they’ve all adopted my family’s tradition of watching Christmas Vacation. So we’ll do that. We’ll play some games with Alexandra and take a walk on the golf course and just chill and have a really nice day with the family… Often around the holidays, we stress ourselves out and become even more tired. Here, we have a national holiday where we have the opportunity to take the day off and really relax and it ends up not being so relaxing and people get more stressed out because of cooking and then you go back to work and you’re even more tired than you were before you left. You know? So, the way we do Thanksgiving now, for the last few years, it really is relaxing.

What are you most grateful for this holiday season?

Debbie Matenopoulos: I’m most grateful for my family and my health and my family and friend’s health, because truly without our health, it’s irrelevant whether you have gifts or toys or time-off. It isn’t until you don’t have your health, that you realize how important it is. And this year has been really difficult for a lot of my friends with a lot of unfortunate sicknesses and breast cancer. It’s been really heavy this year. So, to get to the end of the year and just to know that everyone in my life right now currently is healthy, everything else will fall into place. Everything – It all works out. But you have to have your health because if you don’t, no amount of money is going to help you – no amount of anything. So, I’m just I’m really grateful to have my health and my family and friends close by.

Want another one of Debbie’s favorite Thanksgiving dessert recipes? Try her ginger blondies! 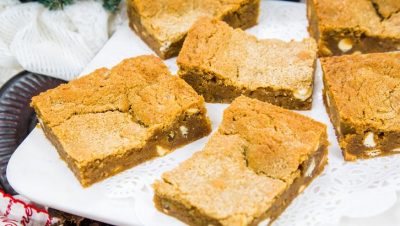 Instead of brownies, Debbie Matenopoulos is baking blondies with an added tasty twist for Thanksgiving this year – " it is so easy and they're delicious," she says. Give 'em a try!

8. Allow to cool completely in pan before removing to cut.