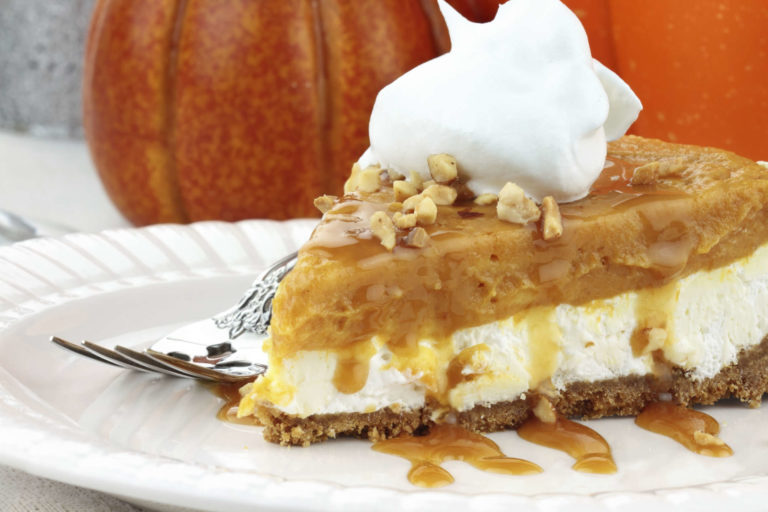 Pumpkin is one of the prized ingredients of fall – pumpkin spice lattes, pumpkin pie, pumpkin bread. But did you know that the canned pumpkin you’re buying at the store probably isn’t pumpkin? It’s most likely winter squash. The FDA says that pumpkin and squash are sometimes mixed intentionally to obtain a desirable consistency, and labeling those items as pumpkin is in compliance with the regulations because the contents do contain pumpkin.

But does this really matter when it comes to making the perfect pumpkin pie? We let Bon Appetit do the heavy lifting. They compared two Libby’s pumpkin pie recipes to their own from scratch, all pumpkin version. The winner? Libby’s Famous Pumpkin Pie.

Here are some of the tastiest and easiest “pumpkin” recipes to whip up, thanks to the convenience of canned pumpkin.

Pumpkin pie spice caramel corn is a great make-and-take snack for Thanksgiving morning turkey bowl games or for snacking after the dishes are done.

These healthy pumpkin pie-inspired bars are made with grated pumpkin, if you’re feeling like stepping away from the canned pumpkin.

An almond/raisin/coconut crust is the base for this semi raw pumpkin cheesecake.

Serve each guest an individual pumpkin pecan pie in a jar.

This pumpkin trifle is full of pantry staples like a spice cake mix, pudding and canned pumpkin.

Low-fat gooey pumpkin cake … I think that says it all!

This spiced pumpkin cheesecake is described as more of a pumpkin pie with a cheesecake twist.