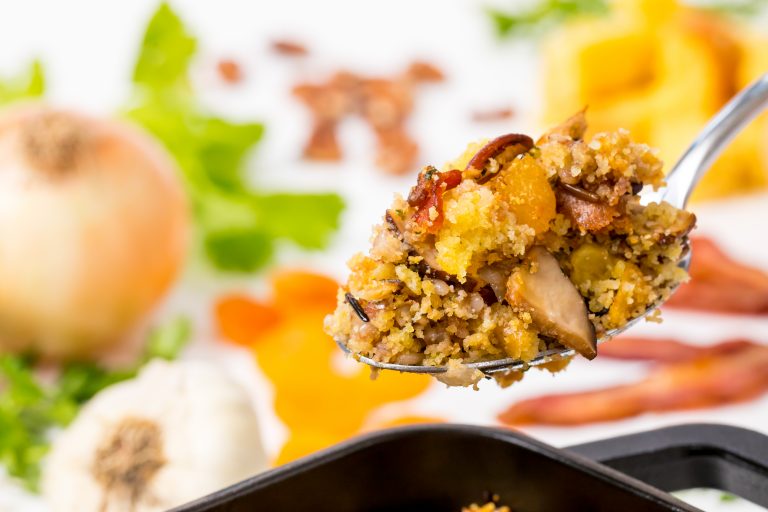 Let this Thanksgiving dinner be the holiday meal that meets the stuffing needs of your entire family all in one dish. Abounding in mouthwatering flavors, our wild rice, cornbread and pecan stuffing features a carb-satisfying abundance of chewy wild rice and yummy cornbread studded with bacon, mushrooms, dried apricots, pecans and fresh herbs. Whether you bake this crowd-pleasing stuffing in a dish or stuffed in the turkey, your family will be impressed.

The best stuffing takes planning. Streamline your Thanksgiving Day dinner prep by cooking the wild rice and making the cornbread up to three days in advance. Keep the cooked wild rice refrigerated until you’re ready to make the stuffing. After you bake your cornbread, dry it out. Drying bread is a critical step in successful stuffing. You can crumble the cornbread and let it dry at room temperature or you can oven dry it until it becomes toasted. Either way, dried cornbread will give your Thanksgiving stuffing texture — and it’s less likely to become indistinct mush.

Cook’s note: Add more broth to your stuffing if it seems too dry. However, keep in mind that if you plan to cook your Thanksgiving stuffing in the turkey, the turkey juices will moisten it as the turkey roasts.

Bacon adds a lovely and distinct smoky flavor to this wild rice and cornbread stuffing. In a large heavy skillet over medium-high heat, cook bacon pieces, stirring often, until browned. Transfer the bacon to a plate lined with paper towels to drain off the excess fat. 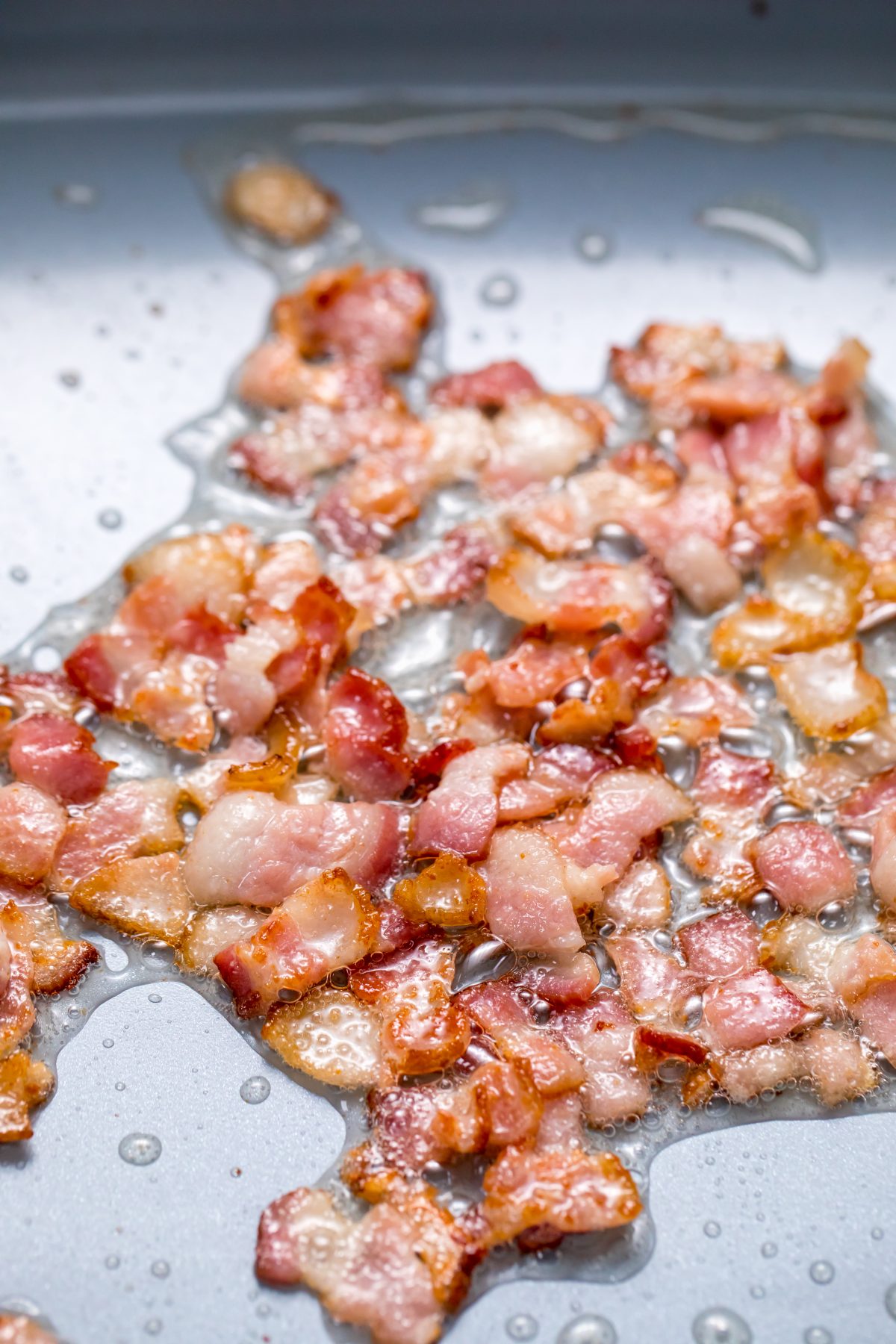 Saute the onions, garlic, celery and mushrooms in bacon fat

To the skillet with the bacon grease, add the onions, garlic and celery. Cook the vegetables, stirring occasionally, for eight minutes or until the onions are tender and glossy. Add the mushrooms, Italian parsley and sage to the skillet and cook, stirring occasionally, for another eight minutes or until the mushrooms are softened. 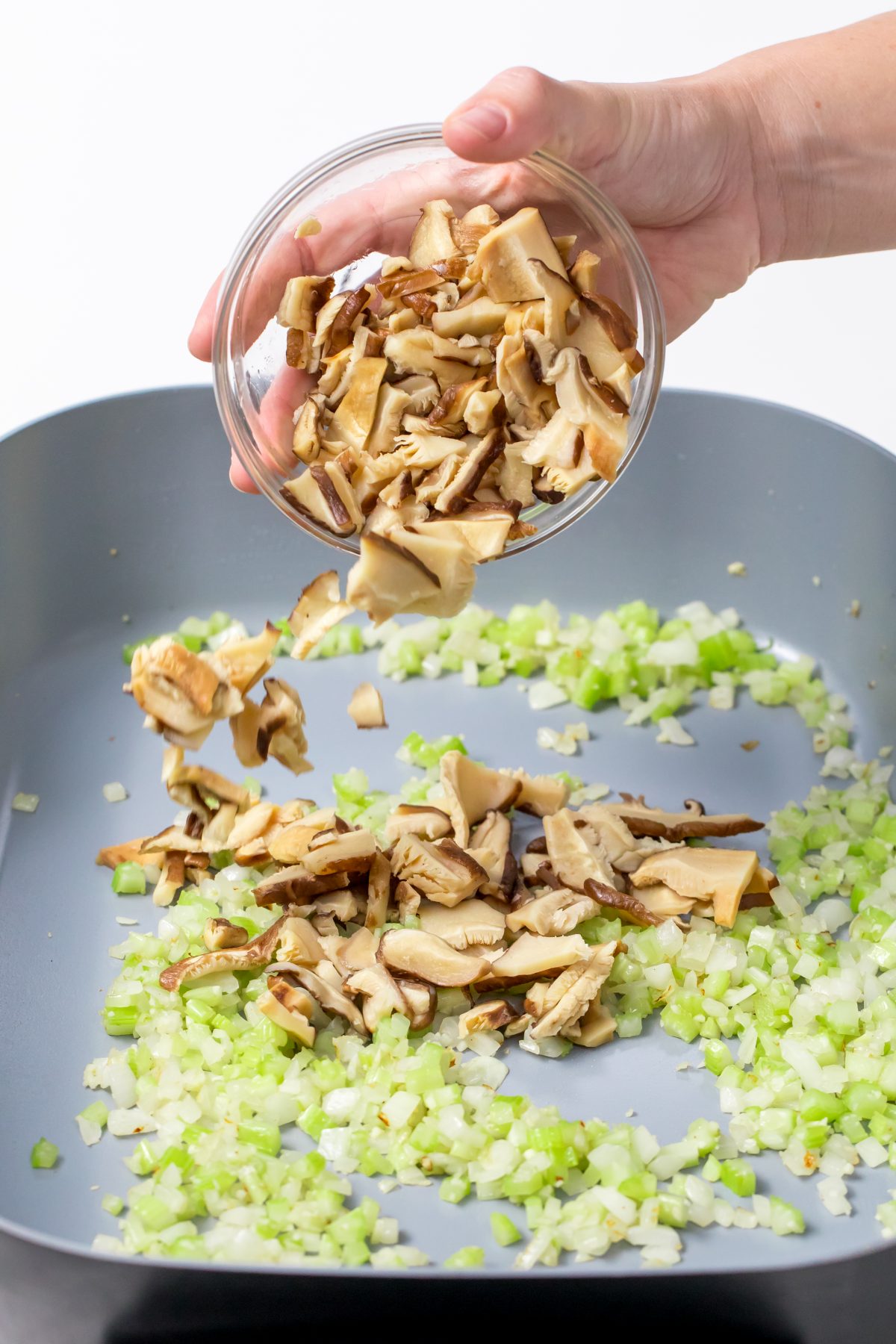 Combine the stuffing ingredients in the skillet

Add the wild rice, cornbread, pecans, butter, apricots, broth and black pepper to the onion mixture, stirring well to combine. Pour brandy over the stuffing ingredients and cook, stirring occasionally, for three to four minutes. Add a bit more broth if the stuffing is too dry. Stir in the crispy cooked bacon pieces. 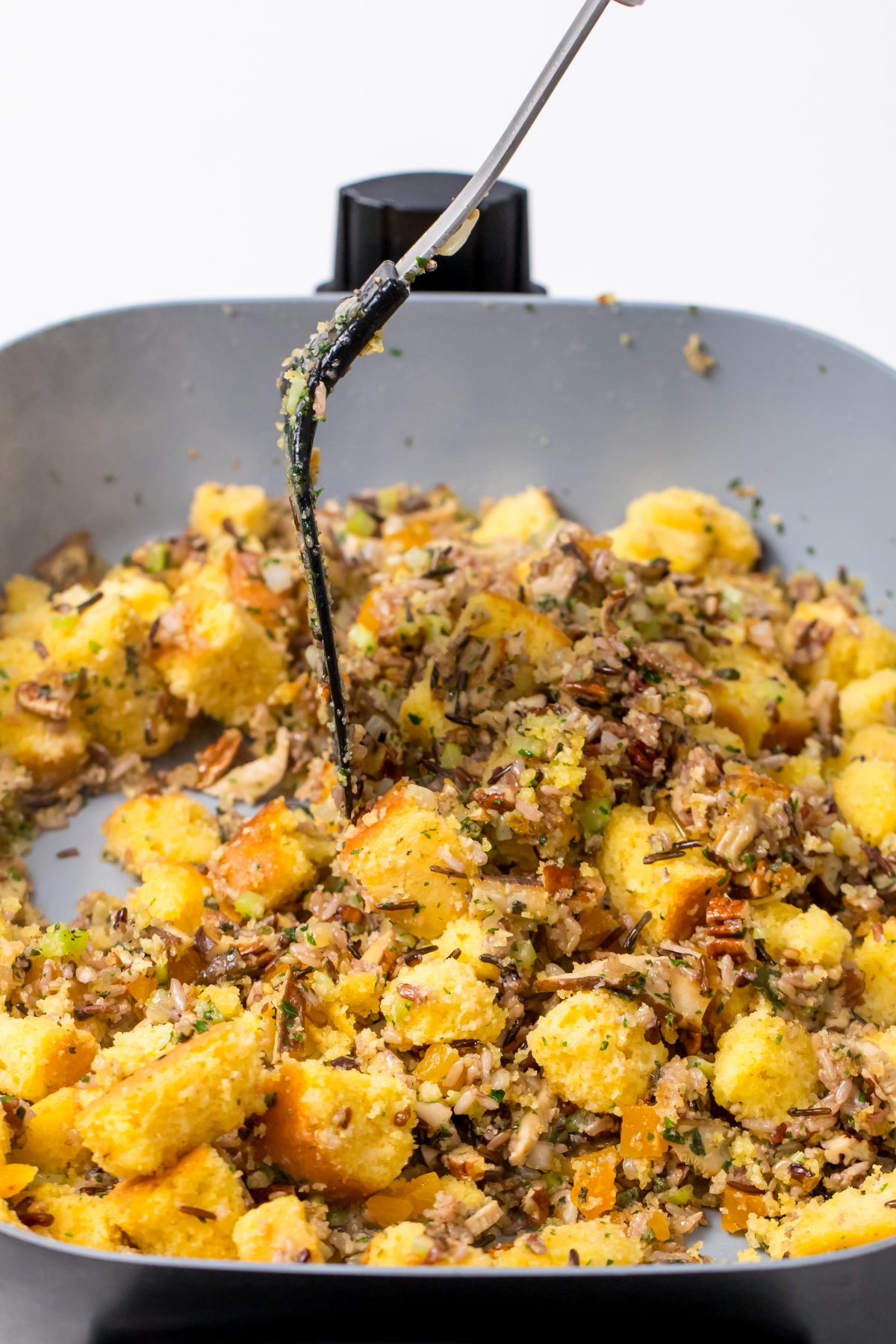 Transfer the stuffing to a buttered casserole dish and bake uncovered at 350F for 20 to 25 minutes. Serve the stuffing hot out of the oven. 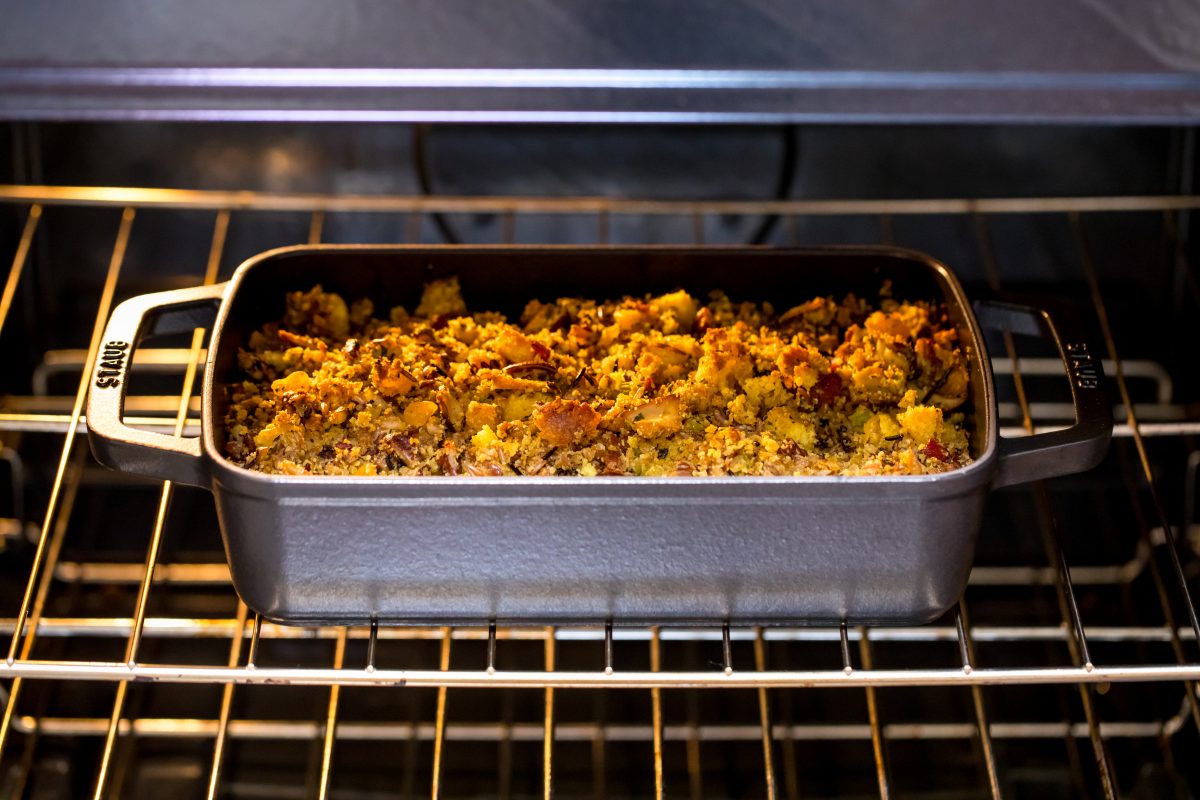 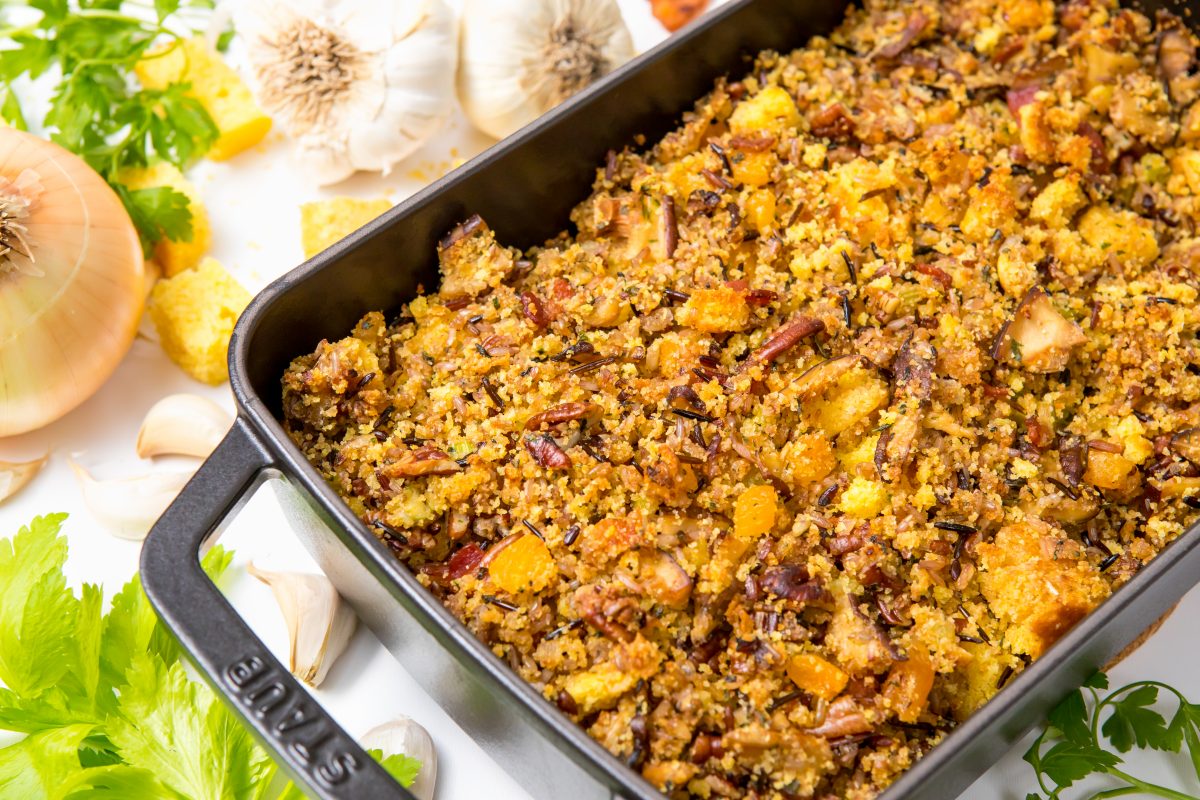 Beautiful platter on your holiday table 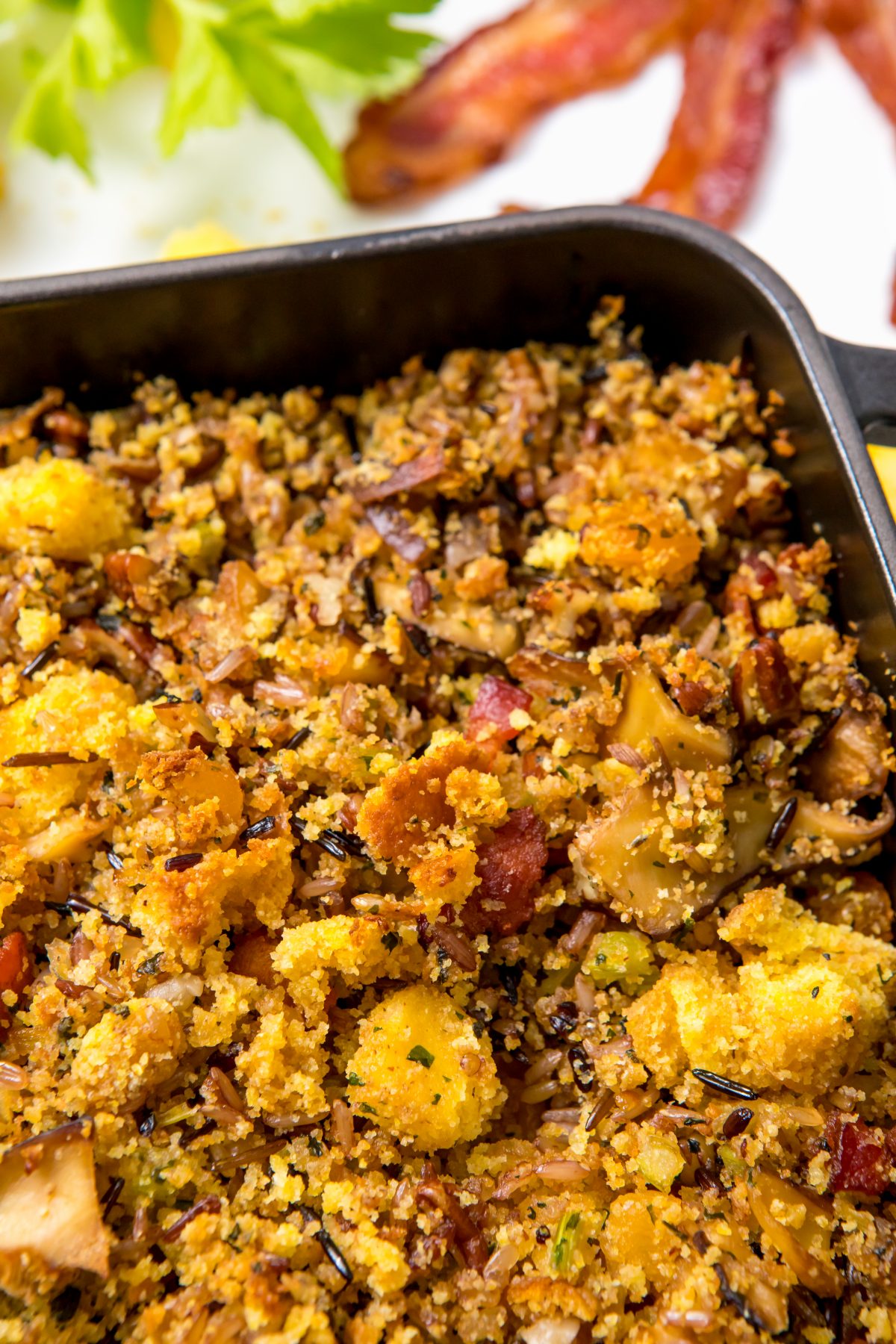 Your guests will be asking for the recipe! 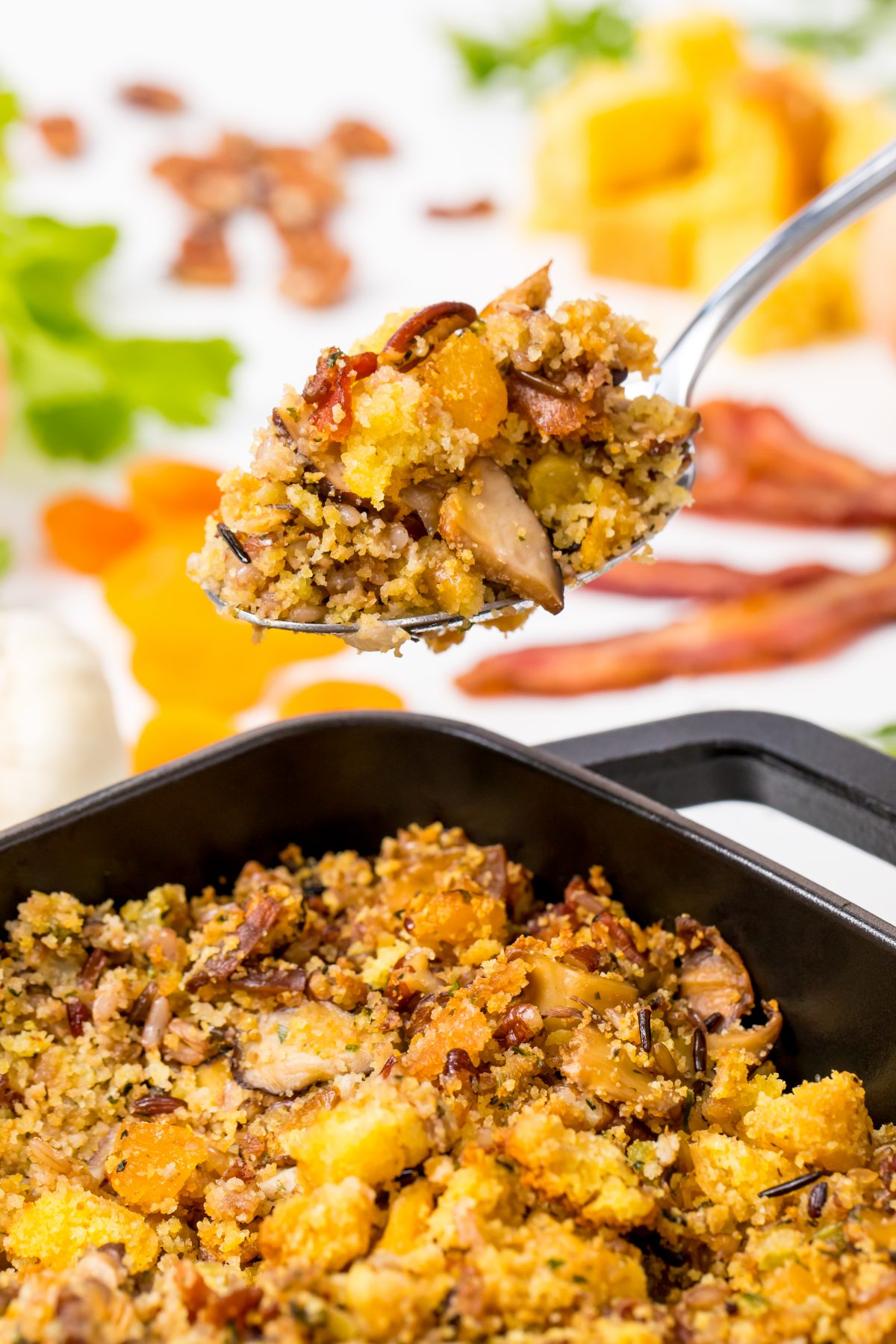 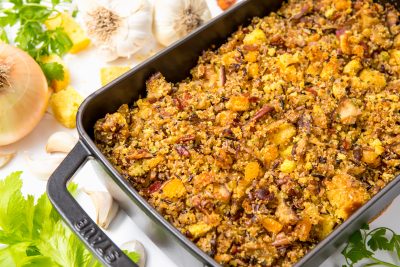 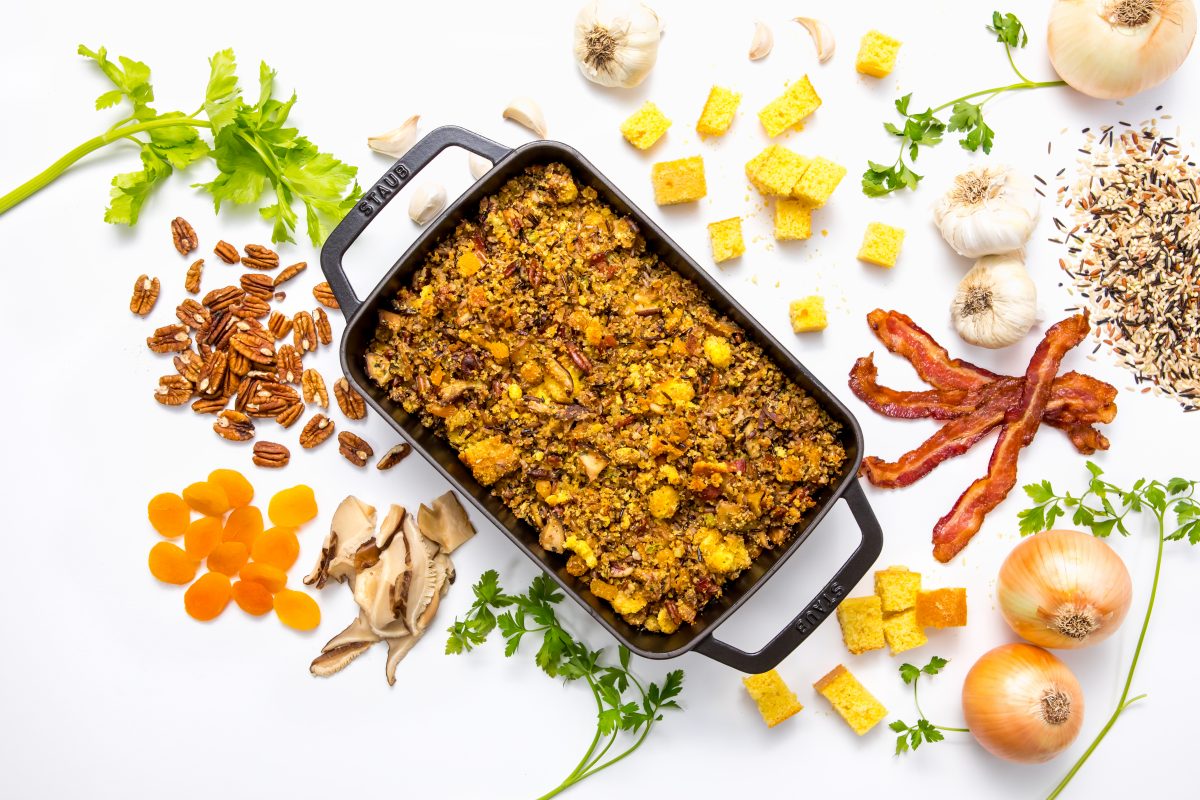