5 recipes that celebrate the combo of sweet potatoes and marshmallows 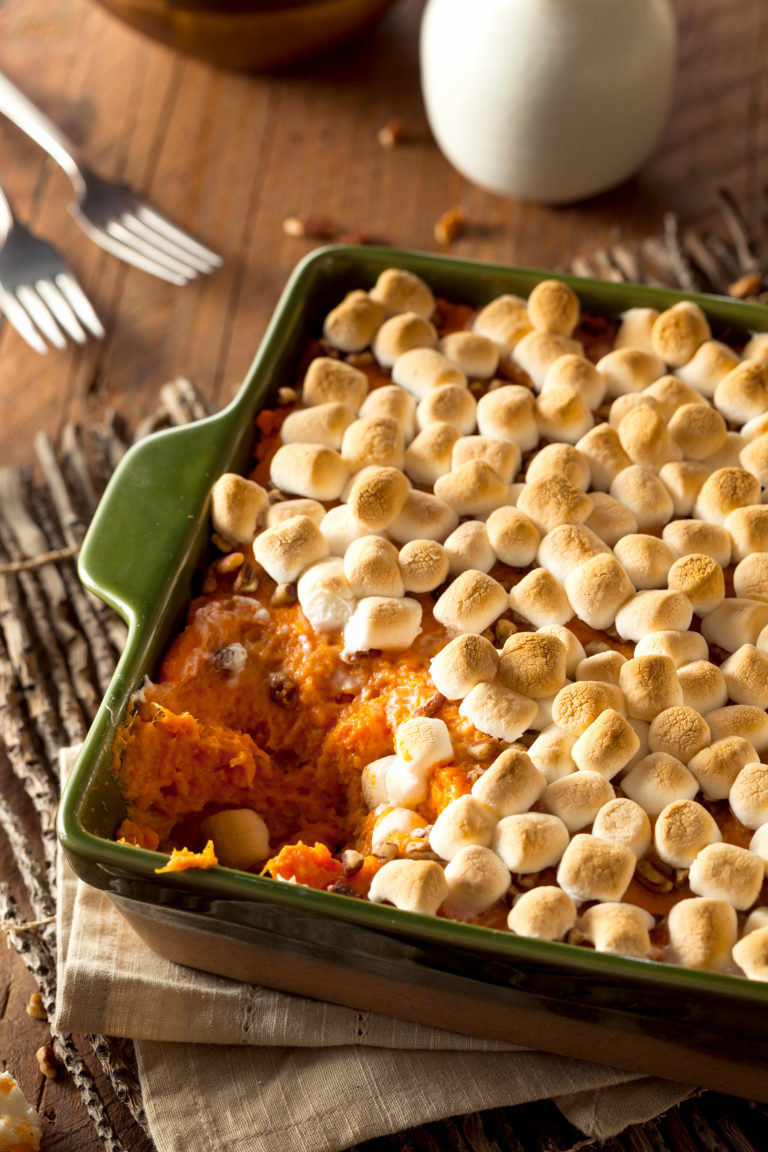 Sweet potatoes plus marshmallows: In other words, vegetables plus candy. Where did such a combination come from?

Some foods just belong together: Peanut butter and jelly, ham and eggs, macaroni and cheese… and sweet potatoes and marshmallows. Have you ever wondered how the sweet potato came to be served with marshmallows?

When I met my German husband two decades ago, he asked this question at his first-ever American Thanksgiving dinner. He could not understand why my mother gave him potatoes that were orange, and why on earth she would put candy on top of them.

I had never thought about it before, but I convinced him to try the seemingly crazy combination. He quickly agreed that the two items do indeed belong together. (Sadly, he still does not feel that way about peanut butter and jelly, but I’m working on him.)

If you think of the sweet potato casserole as a traditional dish that has graced American tables for centuries, you’d be right. The marshmallow, however, is a relatively new addition. According to the Library of Congress, the sweet potato (which is actually a tuber, not a potato) was a staple in the South American diet long before the arrival of Columbus, which means they can be traced back to the ancient Peruvians.

Columbus took some of the sweet tubers back to Spain, and Europeans loved them. Many even believed the sweet root to be an aphrodisiac! The widely-popular root was taken later by early settlers to North America, where they also became a dietary staple. They are even featured in early Colonial recipe books from the 1700s, and around the turn of the century, cookbooks began featuring variations on candied sweet potatoes.

Sweet potatoes often were used in recipes for pies, too; they have a longer shelf life than pumpkins. Around this time, George Washington Carver even came up with a booklet of more than 100 sweet potato recipes.

An even sweeter addition

So how did the marshmallow come to be placed atop the classic casserole, you ask?

Before the turn of the century, marshmallows were an expensive and time-consuming handmade confection reserved only for the rich. Around the time of the First World War, however, companies began manufacturing marshmallows — square ones, not the cute little barrel-shaped ones we know. (The cylinder-shaped white puffs were not created until the 1950s with the invention of an extruder machine.)

Like many classic dishes Americans enjoy today, the pairing of marshmallows and sweet potatoes was the creation of marketers — specifically, marshmallow marketers. The Angelus Marshmallow Company produced a brochure in 1917 designed to encourage women to use marshmallows as a replacement for time-consuming toppings such as meringue and whipped cream. It was in this booklet that the beloved sweet potato casserole with marshmallow topping was born!

Our updated recipe for a sweet potato soufflé takes the old standby casserole and elevates it to a new height.

From cooking to mashing to seasoning with cinnamon and nutmeg, Myria’s recipe for mashed sweet potatoes with marshmallows all happens in one convenient spot: your handy slow-cooker.

Chocolate Covered Katie says of her amazing dessert recipe, “It just wouldn’t be Thanksgiving without the yams or sweet potatoes. Consider this recipe Thanksgiving in a cupcake.”

This beautiful Oatmeal cookie sweet potato casserole from Amanda’s Cookin’ has all the fall flavors in a one-pan dish — including cranberries, raisins, cinnamon, pecans, sweet potatoes — and, of course, marshmallows.