What are you favorite Hanukkah traditions? 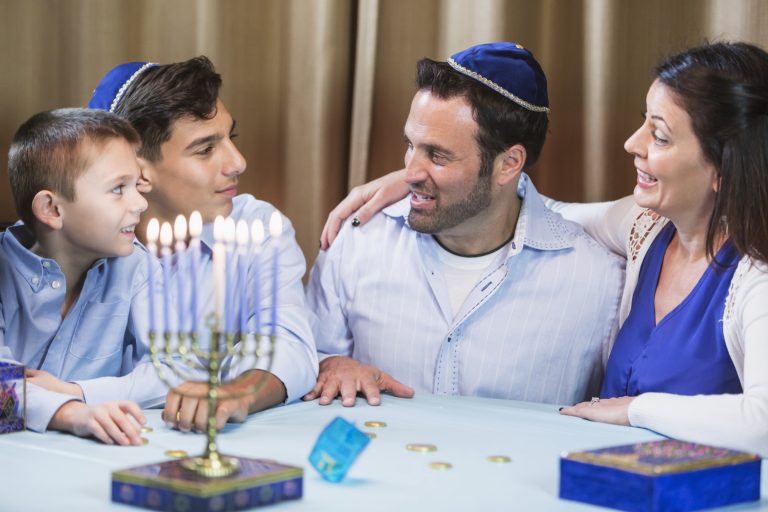 Hanukkah, or Chanukah, meaning “dedication” in Hebrew, is an eight day celebration marking the reclaiming of the Temple of Jerusalem from a group of Syrian Greeks by a small band of Jewish warriors known as the Maccabees.

Hanukkah is celebrated for 8 days in December, beginning at sundown, but the exact day is based on the Hebrew calendar and varies each year.

Also known as the Festival of Lights, the story behind this holiday and this name stem from the night after the holy temple was reclaimed. According to record, once the Greeks had been defeated, a lamp was found in the temple with only enough oil to stay lit for one night. However, it actually stayed lit for eight days, thus beginning the tradition of an eight day celebration.

Since this time, Jewish people around the world have celebrated by lighting their own candles using a menorah, the most commonly recognized symbol of Hanukkah. Each menorah has eight candles, and tradition follows that a new candle will be lit each night using the special ninth candle called the shamash, or “attendant”. By the end of Hanukkah, all eight candles of the menorah will be lit symbolizing the eight nights the lamp remained lit in the temple. Menorahs are commonly displayed in windows and doorways of homes and business. Giant menorahs are sometimes constructed for display in public places.

Since oil is such an important part of this holiday, traditional Hanukkah foods are typically fried in oil. One such food is the potato latke (pancake). Potatoes became popular in the mid-19th century due to abundance of potato crops and the relatively inexpensive cost compared to wheat and cheese.

Another traditional food is the sufganiyah, or jelly donut. These are deep fried and filled with jelly or custard and sprinkled with sugar, for good measure.

Playing with a dreidel (a spinning top with four sides) is the traditional game of Hanukkah. Each of the four sides has a different letter which stand for “a great miracle happened here”, referencing the reclaiming of the Jewish Temple. This game can be played with any number of players and involves the gaining or losing of gelt or candy.

Gelt, the German or Yiddish word for “money”, is the traditional gift of Hanukkah given to children. Gelt is given to reward good behavior, for devotion to religious study, and to encourage giving to charity.

Hanukkah traditions around the world

Afghanistan
Jews here often feel the need to hide their religion due to conflict with Muslims. Therefore, rather than lighting a menorah, they fill small plates with oil in honor of the oil found in the Jewish Temple.

Australia
Due to being in the Southern Hemisphere, Hanukkah is celebrated in the summer here. Nights are spent lighting the menorah while celebrations are held in the day to commemorate the holidays history. The focus is family and big get togethers.

Canada
Due to being a country of immigrants from around the world, Hanukkah is celebrated here much as it is in the United States. Since 1760, families celebrate in the traditions based on the country they immigrated from.

England
London is famous for its giant menorah erected each year in Trafalgar Square. The lighting of this menorah draws thousands of visitors each year.

France
Alsace, a small region of France, uses a menorah with 16 candles with the goal of a father and son each being able to light a candle at the same time.

Germany
In recognition of Germany’s history of Jewish persecution, and in honor of the Jewish community still in Germany, a large menorah is lit in front of Berlin’s Brandenburg Gate.

India
The Jewish community in India is alive and well, and they celebrate with candles dipped in coconut oil versus wax and feast on milk and fruit treat known as barfi in place of latkes.

Yemen
In this country, the seventh night of Hanukkah has adopted a new meaning. The focus of this night is now the celebration of women, specifically a heroine in the Torah who sacrificed seven sons to protect Judaism.