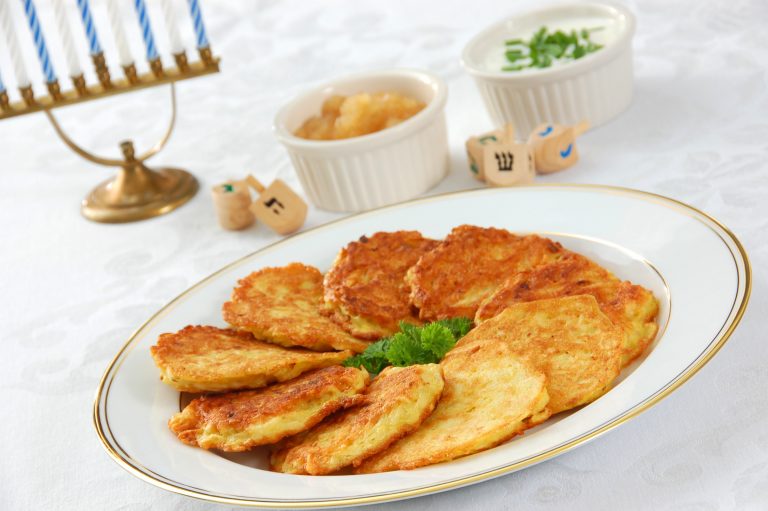 Kugels, latkes, challah, and sour (or sweet!) salads — these are the foods that make a Jewish holiday table. Traditional Yiddish recipes warm the heart and create pure soul comfort. But sometimes you’re craving change. A few tweaks can turn a classic dish into a new culinary experience. Whether you’re cooking for Hanukkah or you’re looking for a new twist on classic Hanukkah side dish recipes, you’ll find yummy options here.

Sort of like a casserole, kugel is a popular holiday side dish among Ashkenazi Jews. Kugels are usually based in potato, egg noodle, or veggie and typically can be classified as either sweet or savory. I’ve always preferred savory kugels myself, but this sweet and savory apple kugel from Living Sweet Moments might just change my vote!

Apples and raisins provide the sweet, while sauteed onions give you the savory. You might think apples and onions don’t mix, but don’t knock it till you try it!

The first step to making this kugel is to cook your noodles. Using egg noodles — as opposed to just any noodle — does make a difference. Egg noodles come in all shapes and forms. Using wide egg noodles will give the apples and raisins nooks and crannies to hide in, while using fine egg noodles might enable your kugel to rise a little higher and will lend a slightly different texture. Experiment and see what your family loves best!

After you’ve boiled and drained your pasta, saute peeled and cubed apples and diced onions together. When the onions begin to caramelize, add your raisins, your spices (cinnamon and nutmeg), sugar, and a few tablespoons of water. Cook for about two minutes, and then add everything to your already cooked and drained noodles.

This recipe recommends adding the eggs directly to the noodle mix (once it’s cooled slightly), but actually, if you beat your eggs separately before mixing them with the noodles and apples, your kugel will be fluffier.

Place everything into a 9×13 pan and bake in the oven for 45 minutes to an hour at 350F. Enjoy the aroma as it bakes, and then enjoy the kugel during your dinner!

Noodle kugels are easily warmed up and can often be enjoyed at room temperature. If you’ve got leftovers, you’ve got an easy breakfast or maybe even a sweet treat for lunch.

It’s not Hanukkah if you don’t have latkes! Latkes are fried potato pancakes, and traditionally, they contain grated white potato, onion, eggs, salt and pepper, and maybe a little matzo meal or flour. What makes this latkes recipe from Vegan Richa special is the addition of sweet potato, interesting spices, and the fact that they are eggless! They can also easily be made gluten-free.

The recipe calls for two pounds of russet or yellow potatoes, along with just one small sweet potato — just enough to give it a slightly different flavor than traditional latkes. To make the latkes gluten-free, instead of using matzo meal or regular flour, potato starch and chickpea flour can bind the ingredients together. Chickpea flour gives it a slightly eggy taste and color.

In addition to salt and pepper, these latkes call for a dash of cayenne. But why stop there with the unique flavor options? You can also try throwing in scallions, dill, mustard, or garam masala. Your imagination is the limit! Along with some vegan sour cream or vegan yogurt (Kite Hill makes the best vegan yogurt, in my opinion), these latkes are certain to please.

A high-quality frying pan is essential for vegan latke cooking. Make sure to choose a heavy-bottomed or cast-iron skillet. If you use a cheap pan, you’ll be in tears — and not from the diced onions. Vegan latkes are notorious for sticking and coming apart as you (attempt to) flip and fry.

High-quality kitchen supplies — plus keeping the oil at just the right temperature — is the secret to non-broken vegan latkes.

Ashkenazi Jews aren’t exactly known for eating healthy, light fare. Many traditional entrees and side dishes are carb-heavy and fattening. Which isn’t bad in moderation! But it’s good to have options, and this Georgian beet, chickpea, and walnut salad from Jewish Food Hero makes a nice contrast to Bubbie’s diet-killing dishes.

While not a Georgian recipe per se, Jewish Food Hero says her inspiration came from learning about the Jews of Georgia (as in the Baltic state near Russia — not to be confused with Georgia, the state in the U.S.). Georgian Jews kept themselves isolated from neighboring Jewish communities and have very different customs from the Ashkenazi Jews of Eastern Europe. Walnuts are native to Georgia, and they feature prominently in many dishes.

This salad is fresh, sour, and earthy. Simply dice three cups of boiled beets and combine with a cup of chickpeas, one or two thinly sliced shallots, and one to three cups of chopped greens. For the dressing, you’ll need freshly squeezed orange juice, lemon juice, one or two garlic cloves, four walnut halves, a teaspoon of salt, and one or two teaspoons of unrefined raw sugar.

You have options when it comes to preparation. You can combine the beets, chickpeas, and shallots with the dressing up to 24 hours ahead of time. Then, combine with the greens before serving. Or, you can keep everything separate and serve the dressing on the side. Garnish with chopped walnuts.

Fresh herbs — a half cup of chopped parsley and a half cup of fresh dill — add sophistication and depth to what’s usually a simple dish. Also, instead of baking the kugel in a large pan, this recipe calls for using a six-cup muffin tin. Arranging your broccoli, cauliflower kugel “muffins” on a serving platter will be significantly more visually appealing than the more common presentation (roughly cut square slices).

The recipe calls for a quarter cup of raw quick cooking oats. Purchase the gluten-free kind, and you’ve got yourself a gluten-free kugel! You could also replace the oats with quinoa flakes.

The recipe suggests baking at 400F for an hour, though in my experience of kugel baking, that seems too long for a non-potato kugel, especially when baking in muffin cups. Keep a close eye on your kugel muffins as they bake to avoid disappointment.

Want more Hanukkah side dish recipes? Check out these below!