13 spooky Halloween desserts that will be treats, not tricks 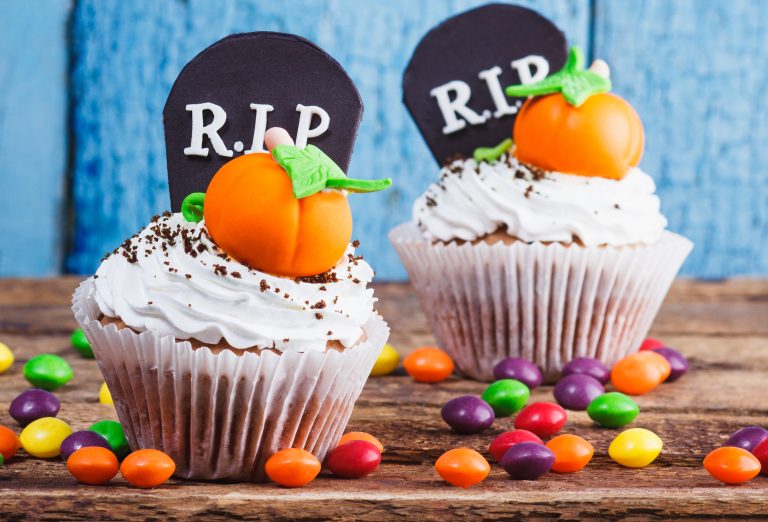 Sweet stuff makes for a happy Halloween party. Although a party is more than just food, great parties have great food, including fantastic desserts. These 13 spooky Halloween dessert treats will entice and allure the ghostly ghouls at your Halloween party this year.

Everyone loves a cake pop. The genius who created the cake pop deserves a Nobel Prize! A cake pop is crumbled up cake, mixed with cream cheese or frosting, and then formed back into a ball. The ball is then dipped into candy coating and served on a stick like a lolly pop. A cake pop is a portable, shareable, perfectly portioned bite of dessert.

No Halloween party is complete without cake, so give Halloween-themed cake pops a try. These cauldron cake pops are so adorably decorated, they really are a festive dessert. The deadliest of mummies will flip for these.

For these cake pops, it is best to start with your favorite box mix. Yes, we know from scratch is often more flavorful, but a box mix is particularly handy for cake pops. The outcome is guaranteed and since there are several other steps to finish the pops it’s nice to take a short cut when you can.

The first step is to bake the cake according to directions, cool, and then cut into quarters. Take one quarter and place in a mixing bowl. Add some frosting, and mix until the cake looks like Play-Doh. Measure out one tablespoon of cake dough and shape into a ball and place the ball on a wax paper-lined baking sheet. Hopefully you’ll get 10-12 balls, (depending on how much taste-testing occurred). The trick to getting smooth cake balls is to roll the dough with clean and dry hands, and not compress it.

Refrigerate for about 30 minutes. Do not put them in the freezer; they will crack if they become too cold. Then follow the directions for decorating these little cauldrons of deliciousness.

Even the Wicked Witch of the East would love these cauldron cake pops.

Galloping gargoyles, we all need more brownies in our lives. Especially ones that are orange and black, Halloween’s signature colors. These brownies are creamy, delectable — and irresistible.

Halloween cream cheese swirl brownies have a chocolate fudge base and a cream cheese layer colored with basic food coloring. These brownies are not only festive and delicious, they are easy to make.

The brownies are made with flour, Hershey’s Special Dark cocoa powder, sugar, oil, baking powder, salt and eggs. Mix all those together for the richest, most delicious brownie mix you will ever try. Not that we’re advocating consuming raw brownie batter — but, you know, sometimes we can’t help ourselves.

Pour the batter into a prepared pan. Persnickety Plates recommends lining an 8″x8″ pan with parchment or foil, and then spraying with cooking spray. Next, take the softened cream cheese, sugar, egg and vanilla and cream together until smooth. Add in the food coloring, a little at a time, until you get the desired hue. Dollop the cream cheese filling onto the top of the brownie batter. Then, using a skewer or toothpick, drag it through the cream cheese into the brownie layer, creating a swirly effect. Bake the brownies at 350F for 30-35 minutes. Remove the brownies from the pan and let cool completely before slicing — as difficult as that will be.

This recipe can be varied by switching up the color of food coloring. Feel like a Valentine’s theme? Use a red food coloring. You could even use team colors for a game treat. Your little monsters will all adore you for these Halloween cream cheese brownies.

“I vant to suck your blood,” cackled the Dracula at my door one Halloween. Sometimes those kids costumes can be downright creepy! But that little devil was on to something We love vampires: goodness, even Count Chocula is a vampire.

Speaking of Count Chocula, did you know he was created by General Mills as one of the first in the Monster cereals line? In March 1971, Count Chocula debuted as a loveable breakfast mascot alongside strawberry-flavored Franken Berry. Count Chocula cereal continues to be in production to this day.

For a special spooky dessert, try these Dracula’s dentures from The Girl Who Ate Everything. Chocolate chip cookies are the “bones”, red frosting are the “gums”, the teeth are mini marshmallows, and the fangs are slivered almonds. This set of teeth won’t go missing — they will disappear.

Besides how great these teeth will taste, the simplicity of the recipe design is downright frightening. Cut the cookies in half to form the base of the dentures. Spread with a little bit of red frosting, decorate with marshmallow teeth and then place the other half of the cookie on top. The slivered almonds are added last.

The recipe is extremely flexible: you can make the cookies from scratch, you can use store-bought. You can make your own frosting, or tint some store-bought frosting. No matter what, these treats will be sure to delight all the zombies running around your Halloween fest.

For a super spooky, yet nut-free, dessert, change out the almonds for pepitas or white gummy candy. For a dairy-free option, use Oreo cookies. However you make these, all the little Draculas at your party will have a new set of teeth this Halloween.

These spooky graveyard cupcakes are a Halloween treat for all. Moist and rich, a chocolate brownie cupcake is topped with a chocolate buttercream frosting and decorated with adorable graveyards and bones.

These graveyard cupcakes use the Speculoos cookies as the headstone. The cookies are topped with a gray-tinted powdered sugar glaze and allowed to harden. The lettering is done with cake decorating gel.

To make these brownie cupcakes, start by melting the chocolate, butter and sugar in a double-boiler on the stove. Then transfer to a bowl and mix in the salt, eggs, flour and just a little bit more cocoa powder for an extra punch of chocolate.

Pour the batter into prepared cupcake liners and bake for 25-30 minutes. Remove from the oven and cool completely. As the cupcakes are cooling, start on the chocolate frosting. It is a standard chocolate buttercream frosting using butter, powdered sugar, cocoa powder, milk and vanilla.

Frost the cooled cupcakes and decorate as desired. The “dirt” is crushed cookies, either chocolate wafers, chocolate speculoos, or even Oreos. Don’t forget to place the headstones! The dead will rise to grab one of these at your next Halloween party.

Who doesn’t love their mummy? Mummies have enthralled the world since the discovery of preserved persons in Egypt in the mid-19th century. In 1817, the mummy of Rameses I was discovered by a group of grave robbers. The mummified remains eventually found their way to Canada, where they were on display next to other curiosities and “freaks” in a Niagara Falls, Canada museum. The collection was purchased in 1999 at which time the mummy was identified as that of Rameses I. The historically significant mummified remains were returned to Egypt in 2003.

The discovery of graves of the Egyptian kings and queens birthed the fascination of mummies. Cartoon and vilain representations came later.  Somehow the myth that mummies can reanimate was started and evolved, scaring children for hundreds of years. Mummies have been portrayed as cartoons in animated shows, from Scooby Doo to Mummies Alive!

The spookiness of mummies naturally led to an association with Halloween. It seems like a match made in the afterlife. For a delicious match this side of life, try these mummy pumpkin cookies from OMG Chocolate Desserts.

This dessert combines pie crust (one of our favorite things ever) with pumpkin cream cheese for an out-of-this-world treat. Start with a basic pie crust (a recipe is included) or you can opt for store bought refrigerated dough. One pie disk is rolled out and then divided into rectangles. The second pie dough disk is rolled out and, using a pizza cutter, cut into thin strips.

Combine the softened cream cheese and with pumpkin puree, sugar, egg and spices. This filling is almost like cheesecake, divinely rich and creamy. Place some of the filling onto the rectangle pie crust pieces, and then place the thin strips over the filling, sealing the edges with your finger. Use the pizza cutter to trim the edges.

Brush the top with an egg wash and sprinkle with cinnamon and sugar. Bake at 375F for 20 minutes. When cooled press candy eyes into the filling for an extra creepy, extra tasty treat.

The grave robbers are sure to find some treasure in these mummy pumpkin cookies.

Whoopie pies are a cakey sandwich filled with a buttercream or marshmallow cream middle. Originating in Amish communities, whoopie pies hail from New England. Whoopie pie lore says they began with using leftover cake batter to make a smaller lunchtime treat. School kids would yell, “Whoopie!” upon finding the treat in their lunchboxes.

The first retail whoopie pies were sold in Lewiston, Maine at Labadie’s Bakery in 1925. They are traditionally a chocolate cake with a white filling, but variations have become popular. Creativity reigns with the whoopie pie and it’s only limited by your imagination.

For instance, this black velvet whoopie pie from I Am Baker is a fun variation for Halloween. A beautiful chocolate cake mix is doused with some black food coloring for a deep black hue to match the colors of the season

In this recipe, the chocolate cake is a German chocolate cake mix, but any chocolate cake mix will do. Additional cocoa powder, a bit more vanilla and black food coloring enhance the basic mix. The batter is then spooned out, one tablespoon at a time, onto a parchment lined baking sheet. The batter os baked for a mere eithg minutes, then cooled for one minute on the pan before removing them to cool completely on a cooling rack.

For the filling, combine butter, powdered sugar, marshmallow cream and the food coloring. For a deep orange hue, Amanda at I Am Baker used three different colors: red, orange and yellow for the perfect Halloween orange.

Once the cake halves are cooled, the filling is spread onto on a half, and then topped with another half. No need to tell how many whoopie pies you’ll need to try to make sure they taste good. These bite-sized treats will keep all the tricksters at bay at your Halloween party.