The only keto-approved Friendsgiving menu you need 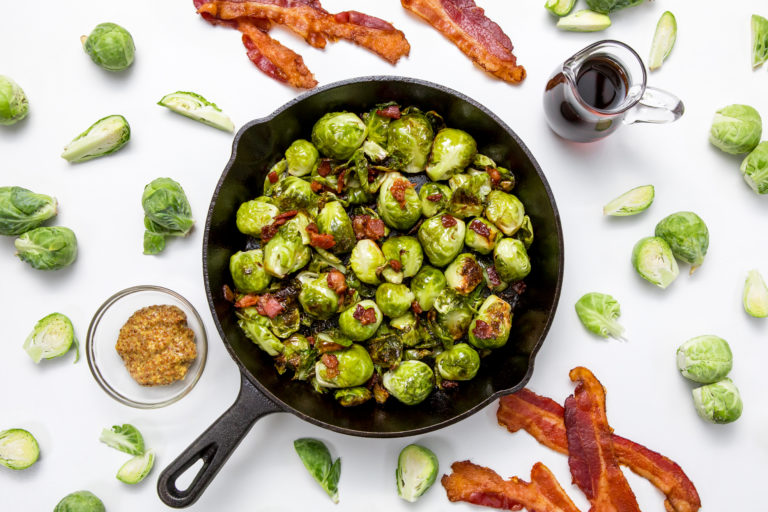 If there’s one given when it comes to adopting healthier eating habits, it’s that making the transition can be torturous. You know how it goes, though — you stick to your convictions and, before you can even back out, you’ve gotten over that initial hump. (By “gotten over” it, we clearly mean moaned, groaned and harbored elaborate fantasies about all the bread.)

Then, just as you find your footing, along comes a holiday capable of compromising all your progress. In November, Friendsgiving is that offender. But hark, there is hope! A keto-approved Friendsgiving menu lets you have your proverbial (grain-free) cake and eat it, too.

You can still host an amazing get-together with your favorite people. Even better? You don’t have to sulk around with raw celery while everyone else dines on the dishes you’ve been eyeballing all night.

The keto (short for “ketogenic”) diet has become one of the most buzzed-about lifestyle trends in recent years due to its perceived health benefits. The catch, of course, is that this high-protein and high-fat diet is decidedly low carb — and, let’s be real, “low-carb Friendsgiving” kind of sounds like an oxymoron.

However, the happy truth is that there exists an abundance of keto-friendly recipes so good you’ll forget you’re even having a low-carb holiday. The following menu will have your people asking for seconds, whether they’re also on the keto journey or just your average freeloading friends. 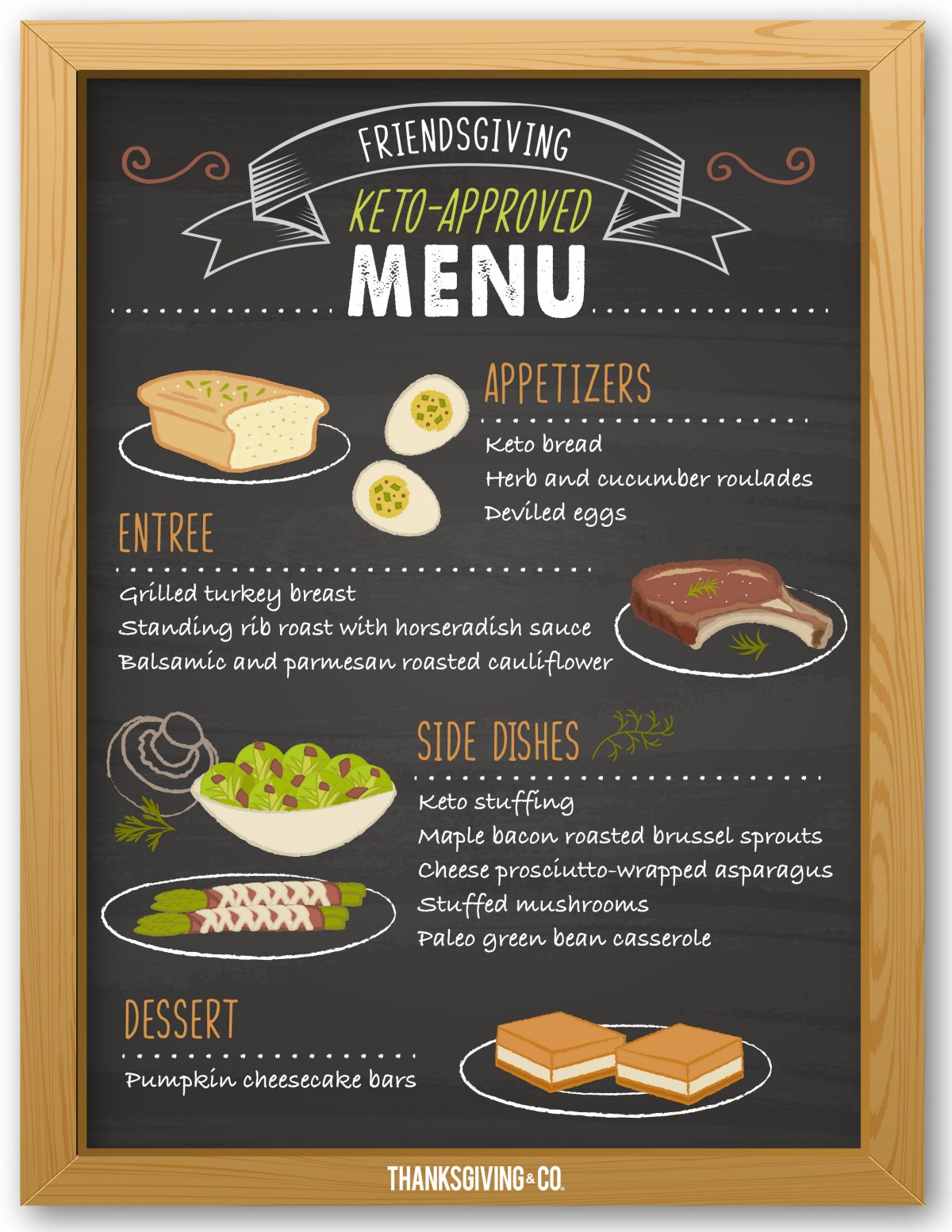 First things first, bring on the bread! See, told you this keto-friendly menu wouldn’t leave you feeling deprived. Can anyone really complain about an evening that involves such a pre-meal classic?

The answer is no — especially when it’s Paleo, grain-free keto bread that’s basically a faux-carb. This version is made from cauliflower, the cruciferous veggie revered in keto circles for being super low in both calories and carbs.

If you really want to up your Friendsgiving street cred, roll out this recipe. You’ll feel fancy AF, and your friends will approve hundo p. The best part (aside from the taste) is that you’ll only have to deal with a handful of ingredients: salt, chives, roasted red peppers, herbed cheese, cream cheese and cucumbers. In other words, they only look impressively complex.

You can never go wrong with deviled eggs. In fact, if you ever have to volunteer to bring a dish for any occasion, raise your hand and stake your claim on these beauties. Not only are they forever popular, but they’re about as keto-friendly as “traditional” party food comes.

Bonus? You can go the standard route or spice yours up with low-carb accoutrements like avocado or bacon.

Forget about the deep fryer, and don’t even think about googling “beer-can turkey”. We can save you the suspense — neither variety of the quintessential holiday meat will make the keto cut.

It’s NBD, though, since you’ll be noshing on a tender and juicy grilled turkey breast this Friendsgiving. A simple herb and olive oil baste keeps this dish keto-friendly, not to mention delish.

Praise be to the keto gods! It may sound too good to be true, but it isn’t. You really can feast on beef prime rib this Friendsgiving without sabotaging your commitment to the lifestyle. The key lies in using minimal, non-processed ingredients — in this case, a standing rib roast and horseradish sauce made from heavy cream, sour cream, horseradish, chives and seasoning.

Let’s talk turkey. Or, rather, the fact that not everyone eats it — or any meat, for that matter.

Sure, you could assume your vegetarian friends will resort to filling their plate with veggie-based apps and sides. Then again, you could give your gathering #squadgoals status by cooking up a balsamic and Parmesan roasted cauliflower to serve as your vegetarian BFF’s main dish.

If the idea of keto stuffing makes you scratch your head, you surely aren’t alone. How can a side dish typically made from bread be low carb?

The secret lies in using keto bread or rolls as a substitute base and then filling the recipe out with low-carb veggies like leeks. So, you still get to stuff your face with stuffing, and you don’t even have to worry about jerking yourself out of ketosis (#blessed).

Let’s get this straight — Brussels sprouts are the unsung hero of any holiday tablescape. They look beautiful. They contain phytonutrients that help ward off cancer. They’re full of heart-healthy fiber. Why do these guys always get such a bad rap?

With only five keto-friendly ingredients, this maple bacon roasted variety couldn’t be a better Friendsgiving side dish if it tried.

TBH, you could wrap just about anything in cheese and prosciutto and we’d eat it. But if you’re trying to stick to a low-carb lifestyle, consuming with reckless abandon doesn’t really jive. Enter, cheesy prosciutto-wrapped asparagus. They’re so good for you that you don’t have to feel bad when you circle around and grab your third bundle.

These caramelized onion and spinach stuffed mushrooms are so pretty it’s almost a shame to eat them. Almost.

In full disclosure, though, onions do have a higher sugar content than some other keto-friendly vegetables, so just try not to gobble down the whole tray of these — and yes, we realize that will be easier said than done the minute you catch sight of all their gooey cheese topping.

It doesn’t matter where you are or who you’re spending Friendsgiving with, green bean casserole makes you feel at home. While this recipe contains a few tweaks, the integrity of the classic dish remains intact. Thanks to a few smart swaps, though, what you get is a vegan, gluten-free, Paleo side that still tastes like the one your mom scooped onto your plate growing up.

If a tree falls in the woods and no one is around to hear it, did it really fall? Or, more pressingly, if Friendsgiving occurs and there is no pumpkin dessert present, did it really happen?

We may never know the answer to some of life’s mysteries, but we can at least solve one — how to eat pumpkin cheesecake on your friend-centric holiday without sacrificing your diet on an altar of carbs. It’s as easy as making a batch of these bars (courtesy of Savory Tooth!) made from almond flour, cream cheese and pumpkin.